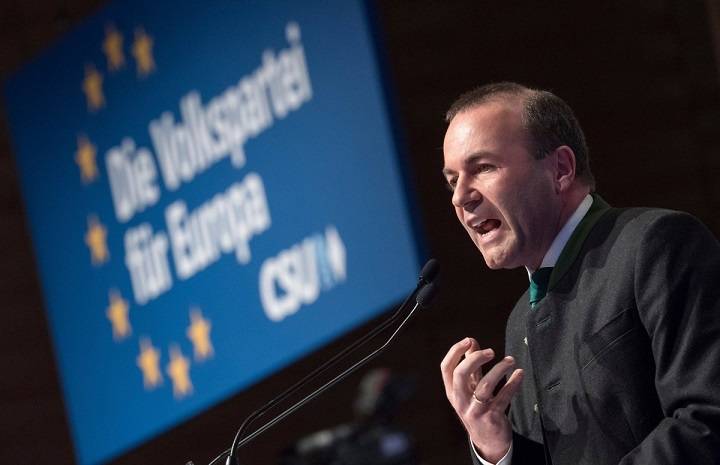 In January 2020, the European Parliament was hot. Parliamentarians of European countries raced accused the USSR, and, therefore, Russia of all the horrors of World War II. Limitrophs of all stripes and the former countries of the Warsaw Pact fought thunder loudest, apparently in order to show special fidelity to the Western masters and earn on their main export product - cave Russophobia.

Former Latvian Foreign Minister and MP from the European People’s Party, Sandra Kalniete, changing political movements like gloves, called Stalin an ally of Hitler. In unison, a voice sounded from the Czech Republic (part of the former Czechoslovakia, which Poland, Hungary and Germany gladly tore in 1938) in the person of the Vice-President of the European Commission Vera Jurova, declaring:

“The European Commission will not tolerate such attacks (Putin’s statement on the anti-Semitism of the Polish ambassador in pre-war Europe) and demonstrates solidarity with Poland.”
Summed up this flood of “sudden” indignation ... the German politician European People’s Party leader Manfred Weber, saying that the Molotov-Ribbentrop Pact is an agreement “between two devils, two monstrous dictators”, as well as a crime against democracy and peace. What can I say, Goebbels would definitely approve of this approach of his compatriot.

Russian historians have already rushed to raise documents and smash European political opportunists with facts. True, one does not have to expect any effect. In addition, in response to the claims of individual countries seeking to use the terrible war as an instrument of political manipulation, we may not see forests behind the trees. That same forest of "democratic" countries, which from the West looked at the USSR with a genuine cannibalistic appetite.

Belgian democracy of the 30s

Let's start with our island of infinite freedom, democracy and tranquility, a lovely “chocolate factory” called Belgium, in the capital of which the EU headquarters has settled. The unspoken homeland of European democracy and unity before the war became the scene of the political struggle of two Nazi parties: the Rexist Party and the Flemish National Union. The only thing that separated these Belgian "democrats" was their national composition. 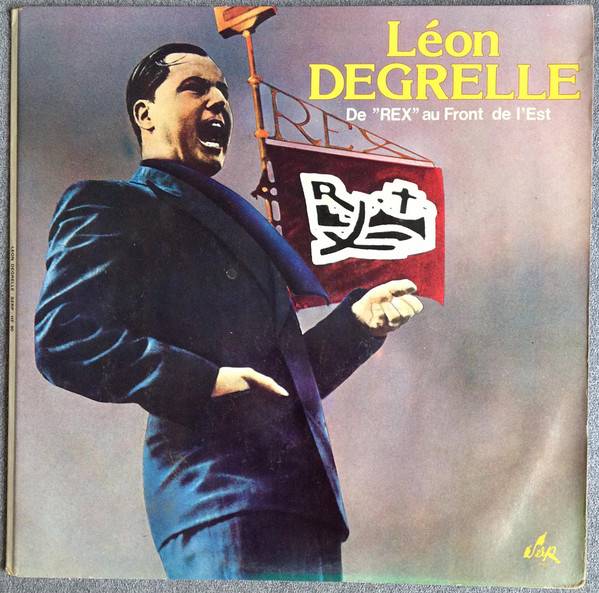 Leon Degrel
Rexists focused on the Walloons, and the “union” on the Flemings. And these parties were by no means marginalized. So, at the peak of their popularity, the Rexists gained over 10% of the Belgians' votes, taking places in the government of the country. Already during the war, the leaders of both parties collaborated with the Nazis, and the head of the proxists, Leon Degrell, even served in the SS Wallonia brigade, commanded by a professional Belgian officer, Lucien Lipper.

Thanks to pervasive propaganda, France in the Second World War is associated with some harsh types in berets and with automatic weaponsfighting against the Nazis without fear and reproach. This myth is not even hindered by the fact that more Frenchmen fought on the side of the Fuhrer than against it. Many realities are still shrouded in mystery. For example, few people know of such a volunteer unit as Carlingue, better known as the French Gestapo. This organization rallied at least 30 thousand Frenchmen engaged in the extermination of communists and Jews. They are also in no hurry to ask why the governors of the French colonies in Indochina, Africa and the Arab East also supported the alliance with the Third Reich, willingly and voluntarily. 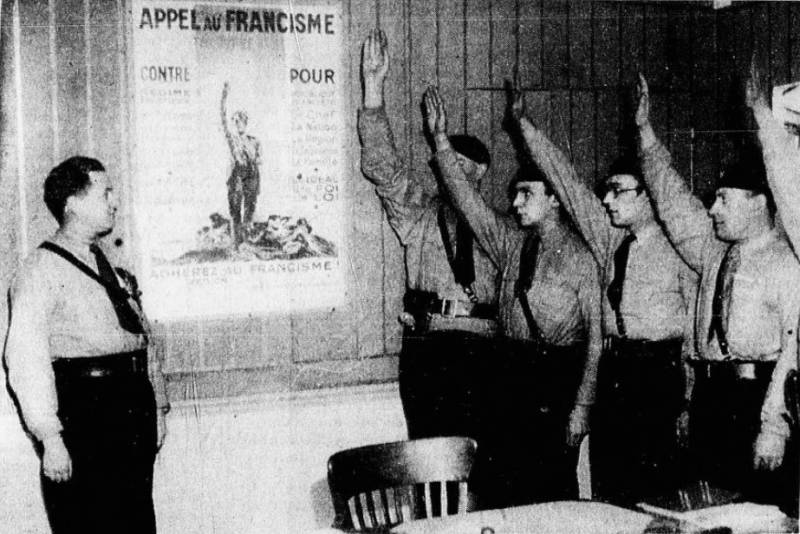 Francist movement
Such agility and humility was laid before the war. The French political clearing of the 30s resembled a boiling cauldron of the most diverse nationalist parties. Their number was really impressive: some appeared with the hamster's life cycle, while others lingered for a long time and took root, surviving the entire war. In the spirit of nationalism, with varying degrees of sympathy for Nazi Germany, “French action”, Camelots du Roi (“Royal fellows”, unofficial name), “Francist movement”, “French solidarity”, the French Nazi party, etc. We select only a few of them.

In 1936, the French People's Party was founded. The parish Fuhrer of the party was Jacques Doriot. Starting from anti-communist positions, the party quickly slipped into cave nationalism. Already in 1937, the party numbered 150 thousand members. During the occupation, Dorio helped form the Legion of French volunteers and actively collaborated with the Gestapo. 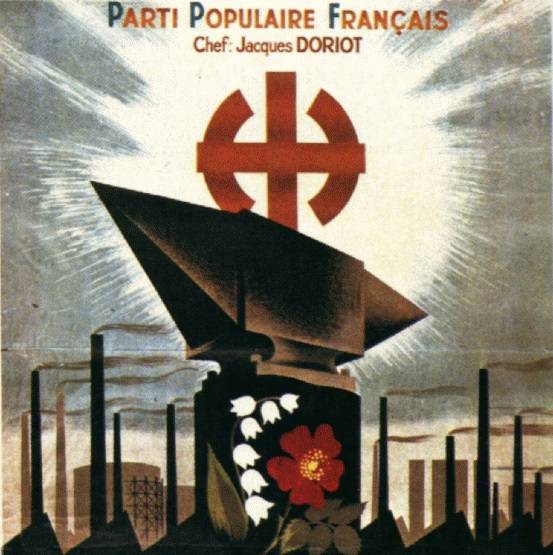 French People Party Poster
The competition of the Doriot party was the French Social Party Francois de la Roque. While reciting the postulates of French nationalism, they did not burn with German Nazism and looked kind of "moderate", but shared the fear of the "Eastern Communist hordes." Frightened by too radical colleagues from the "people's party", nationalist-minded French poured into the ranks of the "social party", eventually reaching an electorate of a million people. The followers of de la Roque were extremely loyal to the Vichy government, did not take part in the Resistance, and Francois himself entered the service of the new Vichy government.

Badge of a member of the National Association
And, of course, do not forget about the brainchild of Marcel Dea — the National People’s Association. The party was conceived before the war, but only with the advent of the Nazis they breathed life into it. Quickly enough, these French Nazis built up “meat” in the form of more than 50 thousand young men and declared the need for integration into the “new Europe”. By 1944, Dea and his followers merged in ecstasy with the Vichy government and the Nazis. After the war, Dea hid in Italy, where he lived quietly until his death, and the "free France" simply turned a blind eye to the actions of his associates.

Not without a military wing with a nationalist ideology. Such a wing were the “Fire Crosses” (“Battle Crosses”). This structure consisted of veterans of the First World War. "Crosses" had their branches, including youth. 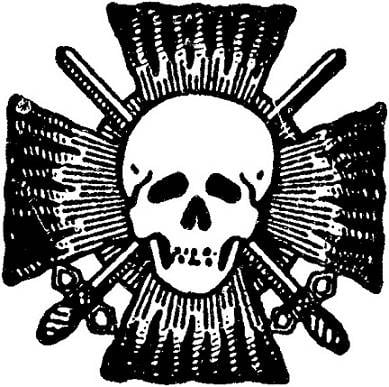 Symbol of the Fire Cross
Speaking of youth. From 1924 to 1936, in France there were up to 90 thousand members of the radical paramilitary movement "Young Patriots" who literally copied the experience of the "black shirts" Benito Mussolini. The militants of this movement cracked down on the Communists and sympathizers, admiring the achievements of their intelligence brothers from Germany and Italy.

Netherlands, the birthplace of tulips and the Fuhrer named Müssert

The country of tulips before the war, by the inertia of World War I, hoped to sit out in neutral status. The only thing the Dutch feared was the communist threat. But nobody opposed the creation of the Nazi bridgehead directly in the Netherlands in the form of numerous Nazi parties.

The country's oldest Nazi party was the National Union, founded back in 1925 by writer and politician Robert Frederick Gruninks van Zulen, who, incidentally, successfully survived the war. Later this party was dissolved in other Nazi movements of the Netherlands. 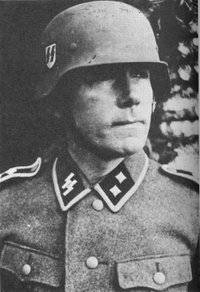 Ernst Hermann von Rappard, leader of the National Socialist Netherlands Workers Party
The next oldest is the National Socialist Netherlands Workers Party, which was born in 1931. The leader was the future SS volunteer, Ernst Herman van Rappard. The party was simply cloned with the NSDAP. She had her own “Hitler Youth”, in which the brains of very young Dutchmen were being tested, and there were their own “stormtroopers”. They didn’t even fantasize about the swastika, they just changed colors. However, the party was awkward and could not gain the support of the Germans, so it was dissolved after the Nazi occupation of the country. 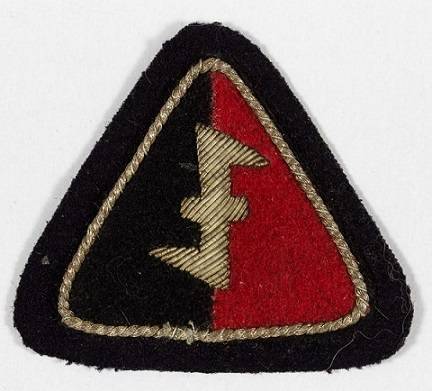 Dutch fascist patch
In 1931, another Nazi political structure was founded - the Dutch General Fascist League, which set itself the task of rallying all the fragmented ultra-right forces of the Netherlands. In the first elections in 1933, the newly created party gathered 17 thousand votes. However, there were too many people who wanted to become the only Fuhrer, so in 1934 the league split into several Nazi parties. So there was the Dutch fascist union and the Black Front. The "Front" in 1937 even managed to hold its members to the country's parliament. This party was banned by the Nazis during the occupation, because collaborators asked the Germans to allow them to take the oath to the Netherlands before engaging in the extermination of people, not the Reich. 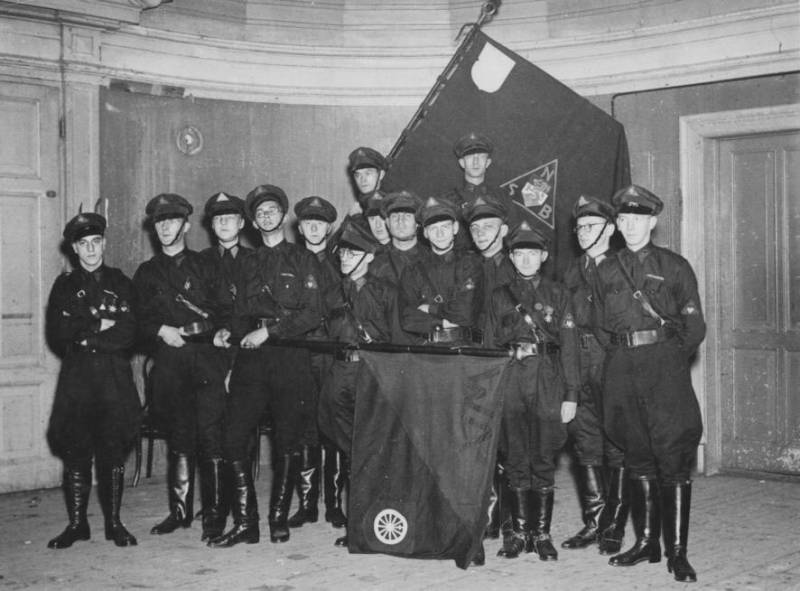 Members of the National Socialist Movement

But the patriarch of this Nazi swamp was the National Socialist Movement. Founded in 1931 in Utrecht by the future quite official leader of the occupied Netherlands, Anton Mussert, this movement quickly became a real party with extremely radical nationalistic views. Already in 1934, under the Nazi banner of the National Socialist Movement, about 25 thousand citizens of the country, in which just over 8 million people lived, rallied. 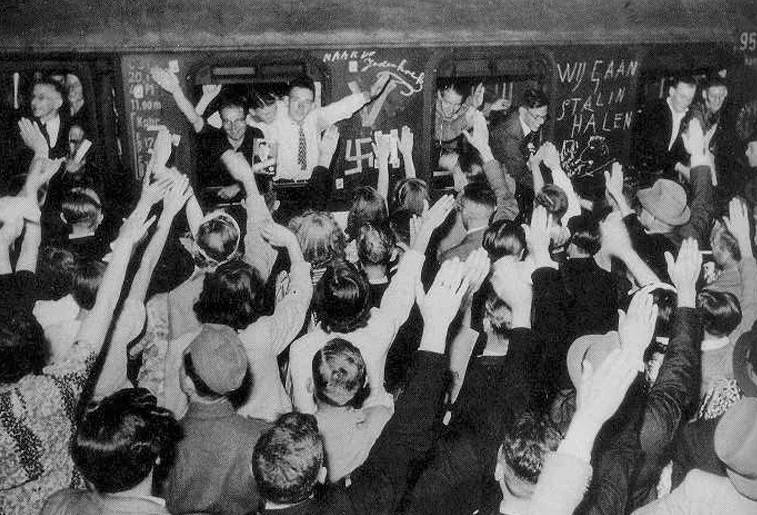 Dutch volunteers escorted to the Eastern Front. On the car on the right is written: "We are going to take Stalin"
Frank Nazis in 1935 managed to collect 8% of the vote in parliamentary elections. Now, party members felt completely at ease in power, literally treading all their opponents, especially if they were suspected of the slightest sympathy for the Communists. Along with getting used to the power seats, the party leader Müssert began a slow preparation for the overthrow of the legitimate authority of the Netherlands and the abduction of Queen Wilhelmina.

They were literally a month late. In 1940, the Nazis themselves crushed the Netherlands, the queen and all her associates fled to Britain on the British destroyer Hereward, and the Nazis elevated Anton Mussert to the throne on their own.

On the little things ...

Probably, it would seem to some that the author is deliberately exaggerating, because it is too difficult to believe that countries that are clogged with propaganda as “victims” themselves cultivated nationalism on an industrial scale. In addition, in this peculiar digest of the countries of pre-war Western Europe, far from all the states that find it extremely difficult to squeeze into the framework of “victims”. But citing precisely the list carefully wiped in stories facts, we can understand how national swagger was cultivated in Europe, the very “white man’s burden” that haunted them, and multiplied by the fear of the “ghost of communism”, pushed for the most hateful actions.

Posters of "united Europe" 40s. Nazi symbols are blacked out due to an extremely strange interpretation of laws by executive bodies
What, for example, haunted hundreds of neutral Liechtenstein citizens who, of their own free will, went to fight on the side of Germany? And at that time it was 1% of the total population of this microscopic principality. Only half of these fans of the “new Europe” returned home, and, of course, none of them were prosecuted.

Is it not this national swagger that inspired the Minister of Foreign Affairs of such a “peaceful” Switzerland, Marcel Pile-Gall, when meeting with representatives of official Berlin, to declare that the invasion of the USSR is “action in the interests of all of Europe”? At the same time, through the efforts of Major General and the talented physician Eugen Bircher, Switzerland established a Swiss patriotic association with a frank inclination towards Nazism. The association rallied a huge number of ordinary officers and even high-ranking military men like the commander-in-chief of the Swiss army, Henri Gisan. In addition, Bircher, as an aid to ideologically close Nazis, facilitated the sending of a group of Swiss doctors under the auspices of the Red Cross to the Eastern Front. True, these doctors treated only the same "ideologically close" Nazis, completely ignoring the death cries and moans of prisoners.

About Eastern Europe, the countries of Scandinavia, the Baltic States and the Balkans, read the following article.

We are in Yandex Zen
About Stalin and Khrushchev
How Latvia pragmatically and constructively cooperates with Russia
51 comment
Information
Dear reader, to leave comments on the publication, you must to register.