“I can see everything from above, you know it!” Museum of plans and reliefs in Paris 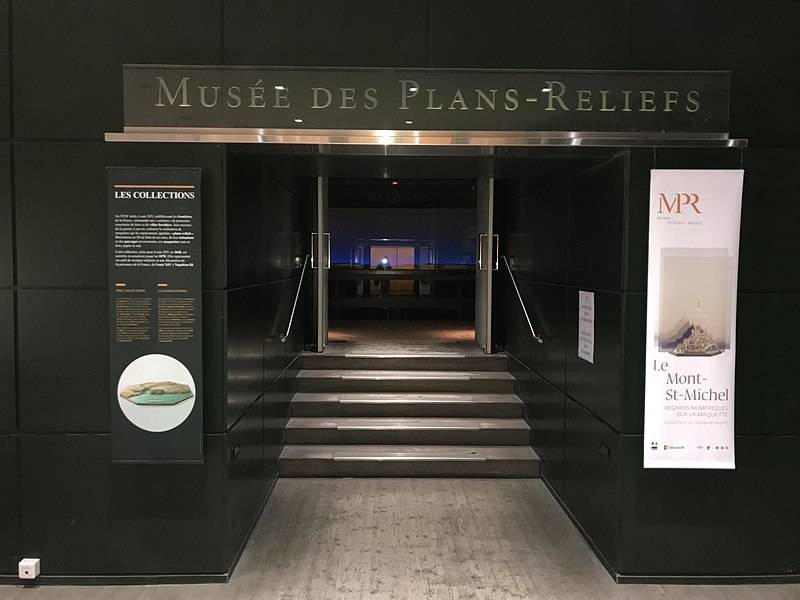 Entrance to the museum

Interesting museums. On pages "IN" We have already talked about what can be seen in the Museum of the Army. It’s just that there is so much there that in one day it can only be bypassed ... But in order to examine it, you need to allocate at least two days, and then it will be a very, very cursory inspection.

There is another museum in the Paris Army Museum, so to speak, a museum in the museum, which is worth visiting at least out of curiosity alone, since there is no other such museum anywhere else. This is a Museum of plans and reliefs, created by chance after the idea of ​​drawing relief maps to King Louis XIV was prompted by his Minister of War Luvois. Obviously, this was more obvious, and besides, with the help of relief maps, the fortresses under construction were easier attached to the terrain. The outstanding military engineer Vauban took up their development, but Louis gave all the mock fortresses created by him the status of especially important state secrets. In total, more than 20 such cards were created. And they were stored in the Louvre, in a well-guarded room. Special people were sent to take plans from fortresses in other countries, and the Sun King was particularly interested in strengthening Holland. But along with the death of the king, his secrets died with him. Rather, they seemed outdated and unnecessary. 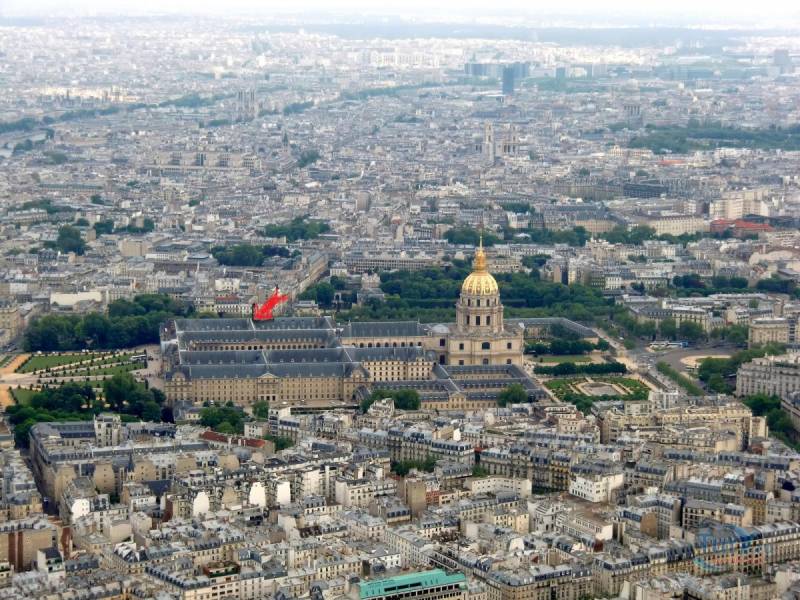 Bird's eye view of the Disabled House. Pay attention to the two blocks of buildings on the left, reminiscent of two huge numbers 8. So the museum we are interested in is located in the distant block just in the middle of the GXNUMX (the red arrow points there)
Only after the Seven Years' War began, Louis XV decided to update the old maps, than in 1754 and the Minister of War took up the Duke de Broglie. It was possible to restore about 15 maps, to which several new ones were added. But then they became outdated and in 1777 they were all transported to the House of Disabled. Disabled people had to work so that there was something to feed them, as well as pour a wine portion, deprivation of which was one of the most serious punishments there! But they needed to give work according to their strength - disabled people all the same, - then they thought up so that they would work on the production of such relief maps and plans! The production of relief plans was resumed during the Revolution and continued under Napoleon 1. It was discontinued only after the 1870 war in connection with the refusal to build bastion fortifications.

Chamber of cards in the Louvre.
But from 1668 to 1870, 260 (!) Relief maps of 150 fortified objects located on the borders of the kingdom, as well as in its former possessions, were made. The collection was traditionally kept secret for a long time, but became an amazing monument stories fortification and breadboard modeling. 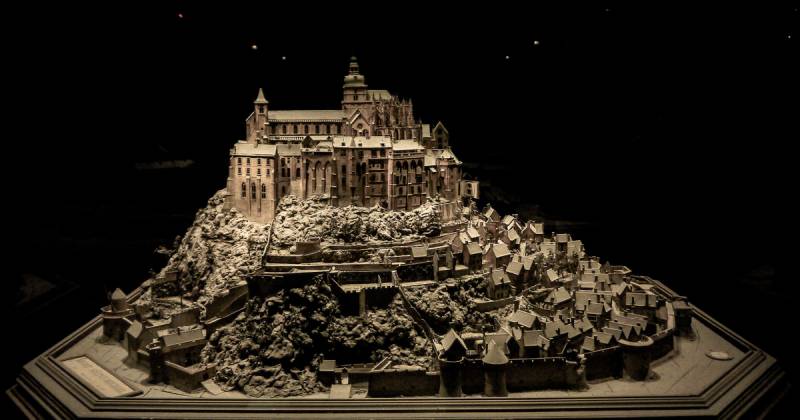 I always really liked Mont Saint Michel. But when else can I see him close. And here - here it is, with all the details
It was opened for public viewing only in 1953. By that time, museum workers had about a hundred relief maps and about seventy detailed plans of different cities belonging to different eras. But the museum got visual aids, which taught military engineers. Well, the oldest and most valuable exhibit, which dates back to 1686, is the plan of fortifications of Perpignan, developed and implemented by Vauban, a city on the border with Spain. 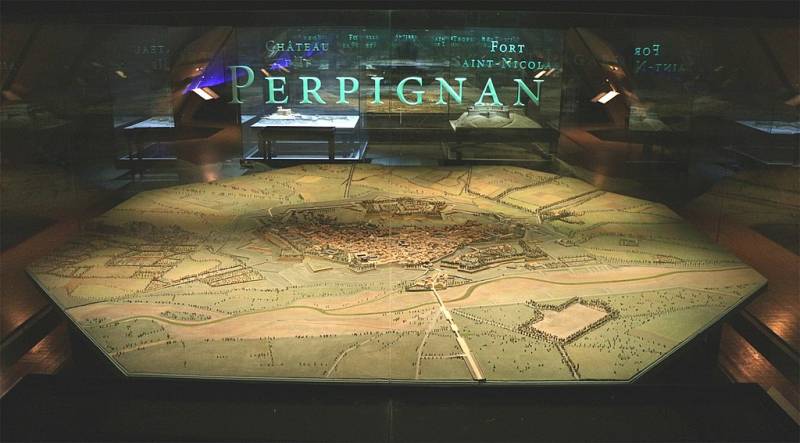 Here it is, this plan
Well, one of the most beautiful is the layout of the fortifications of the famous fortress island of Mont Saint-Michel in Normandy, made in 1691. This fortress was a stronghold of power on the northern coast of France, so even the English fleet could not capture it. 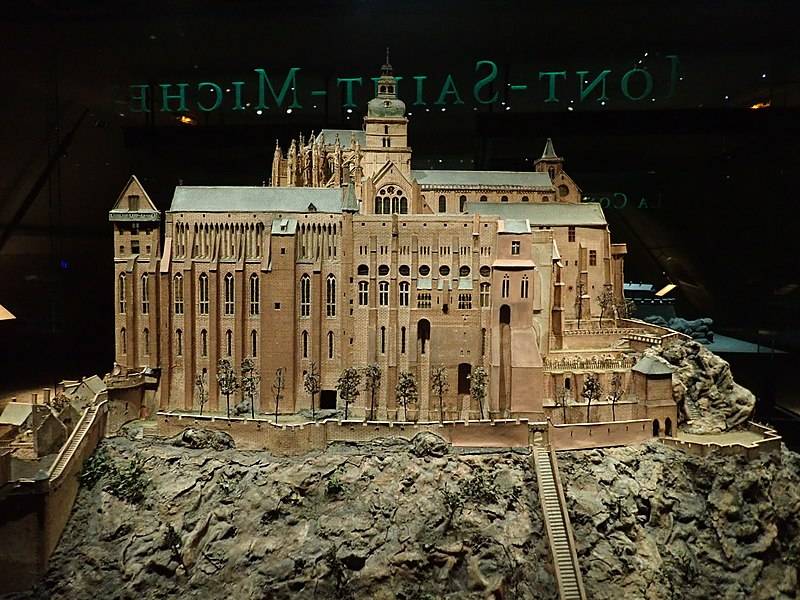 And again, the layout of Mont-Saint-Michel. Usually in all photographs we see it from the coast. But here we can see how he looks from behind ...
Interestingly, this very specific museum is the second most visited in the Museum of the Army - that's even how. Apparently, the desire to see huge cities and castles from above attracts people here like a magnet. It is interesting that only the exhibits themselves are lit in the halls, so a mysterious twilight reigns, only reinforcing the impression of what he saw. But it should be remembered that in no country in the world there were such accurate maps and terrain as those that were collected here. So, setting off for the next campaign, the French marshals should only pay a visit here and find out if there are plans here for a certain city or fortress to be conquered or not. Well, only then act according to the circumstances. By the way, many preserved relief maps are still being restored, so that the collection of this unusual museum is constantly updated. 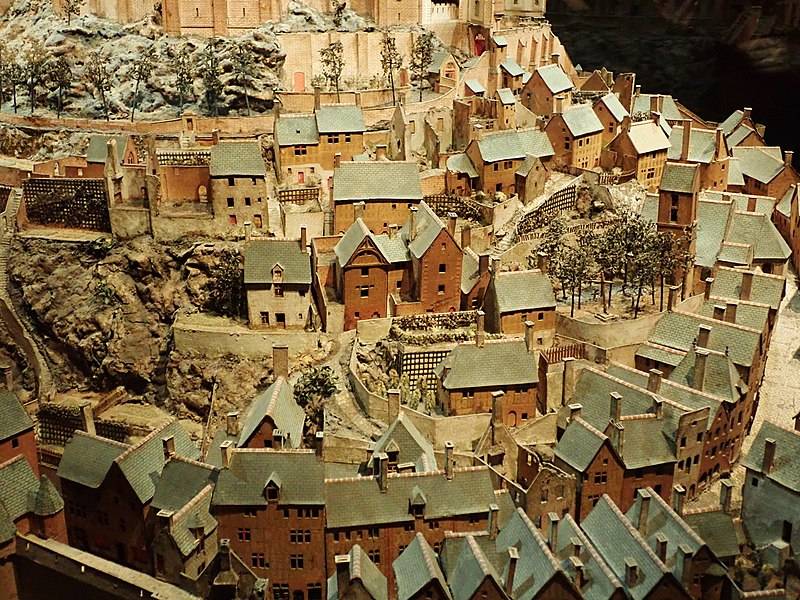 Mont Saint Michel. Such was his building at the end of the XNUMXth century. Masterfully made layout, right ?!
Here we digress a little from the topic, because we still need to explain in more detail why the need to create such mock-ups arose no earlier and no later than the era of Louis XIV. But the fact is that it was in his time that the power of artillery became such that not a single old castle or a single old fortress could stand up under their fire. That is why, from the 1750th century, the upper parts of medieval towers begin to be dismantled, and their bases covered with earthen ramparts, which better resisted the cast-iron cores. So the concept of bastion fortification was born, brought to perfection by the same Vauban in the 1777th century. But it required a more accurate reference to the terrain than medieval castles, that's why visual layout plans at that time appeared. Due to the accuracy of its execution, relief plans have become for us an important source of information on the construction of cities before the era of industrial revolutions. Indeed, not only fortifications are present on the models, but also farms, mills, ports, roads and bridges. First, relief plans under the royal decree were made on the ground, directly in the settlements. Then, from XNUMX, the workshop for their production was located in Mezieres, and in XNUMX she was transferred to the House of Disabled. The manufacturing technique and scale of the layouts were gradually standardized. So, the corresponding relief was sawn from a tree, which was then covered with a layer of fine sand and silk. The trees were made of silk fibers twisted on the base of metal wire. Buildings were cut out of small wooden blocks, after which they were pasted over with corrugated or dyed paper. 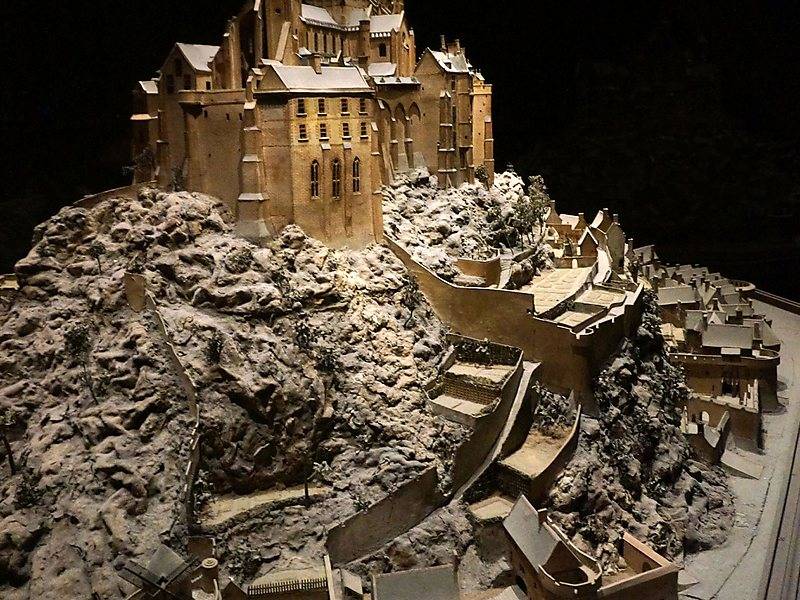 And so, this layout depicts the rocks that make up the island itself.
The main scale is 1: 600, which allows even large objects such as entire cities to be shown on the layout.

Well, now we’ll take a little walk around this museum and see what it has in it is so very interesting. At the entrance to it hangs a map on which all the objects whose layouts are on display are marked. And above all, these are the fortifications of the English Channel, the main of which is the monastery-fortress of Mont Saint-Michel. It is a vivid example of a fortress built on a rocky islet. In the east of France, it is the city of Strasbourg, the defense complex of which was further fortified in the 2nd half of the XNUMXth century. the construction of Fort Chavagnac. 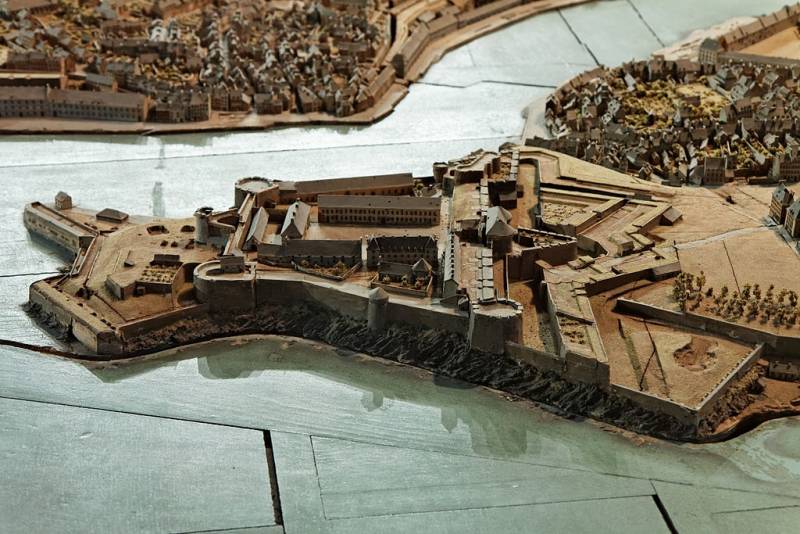 But this is the fort of the port of Brest, 1807 - 1811.
On the Atlantic coast, many fortresses were built by the notorious Minister Colbert. Here, special attention is drawn to the layout of the Belle-Ile citadel (well, the very one that the well-known Porthos strengthened in the Dumas novel), reproducing this settlement after the work carried out there under the direction of Marshal Vauban.

The mock fortifications of Onis province are primarily forts on the islands of Re, Oleron and Aix, and completed with the construction of Louis XIV in order to cover the port of Rochefort, built by Colbert in the depths of the Charente River estuary.

In Aquitaine, the coast was monitored from the port of Bayonne, the strengthening of which continued until the 1700th century. The Bordeaux coast was also protected by a number of fortifications by Fort Blam, Fort Pate and Fort Medoc. All of them were built between 1705 and 1701 and were directly related to the defense of the French coast during the Spanish Succession War, which lasted from 1713 to XNUMX. 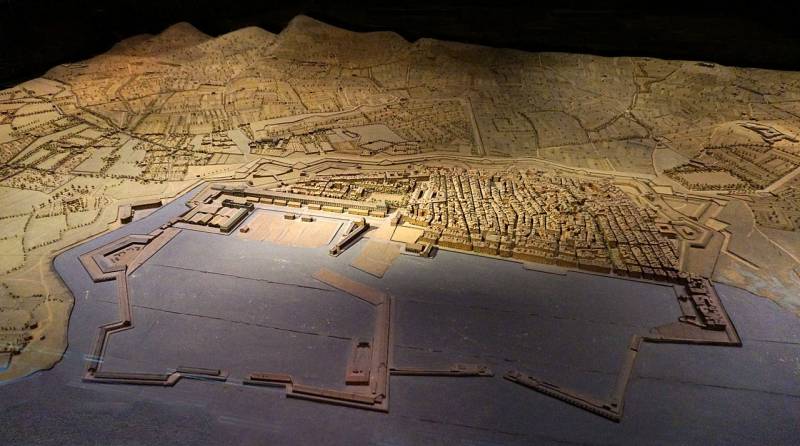 Museum interior and Bayonne layout
Large-scale fortifications were carried out by Vauban and the Pyrenees, and were launched in 1679 at his request after the war between France and Spain revealed the vulnerability of the Franco-Spanish border. Fortifications and forts were erected in pairs, such as Fort Lagarde and Fort Le Bon on the border in and around Perpignan. 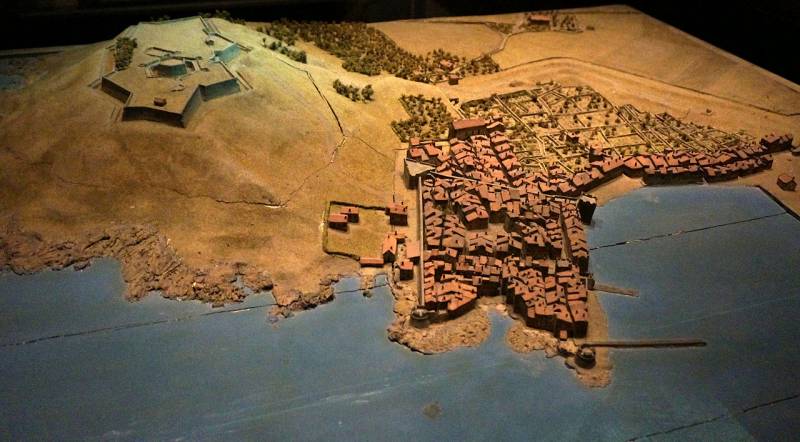 The famous Saint Tropez
In the Mediterranean direction, one of the most popular layouts is the model of If Castle in 1761. Well, I see, because Edmond Dantes, Count of Monte Cristo, was also kept there! Also in the collection of the museum there is a model of the Tower of London and the fortifications of Rome. 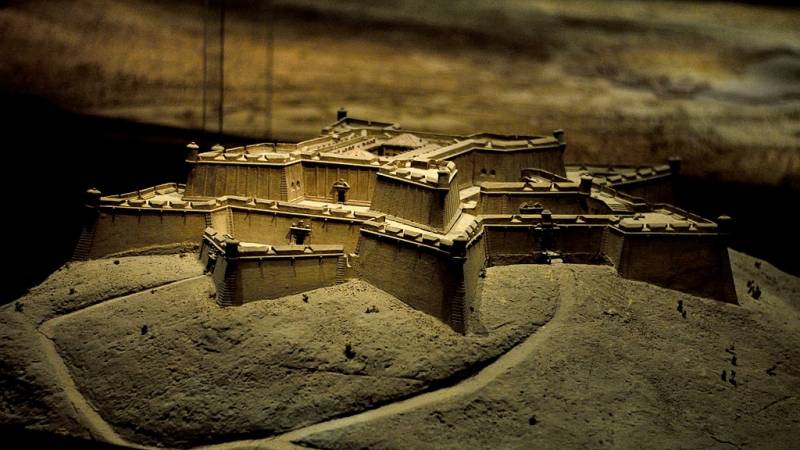 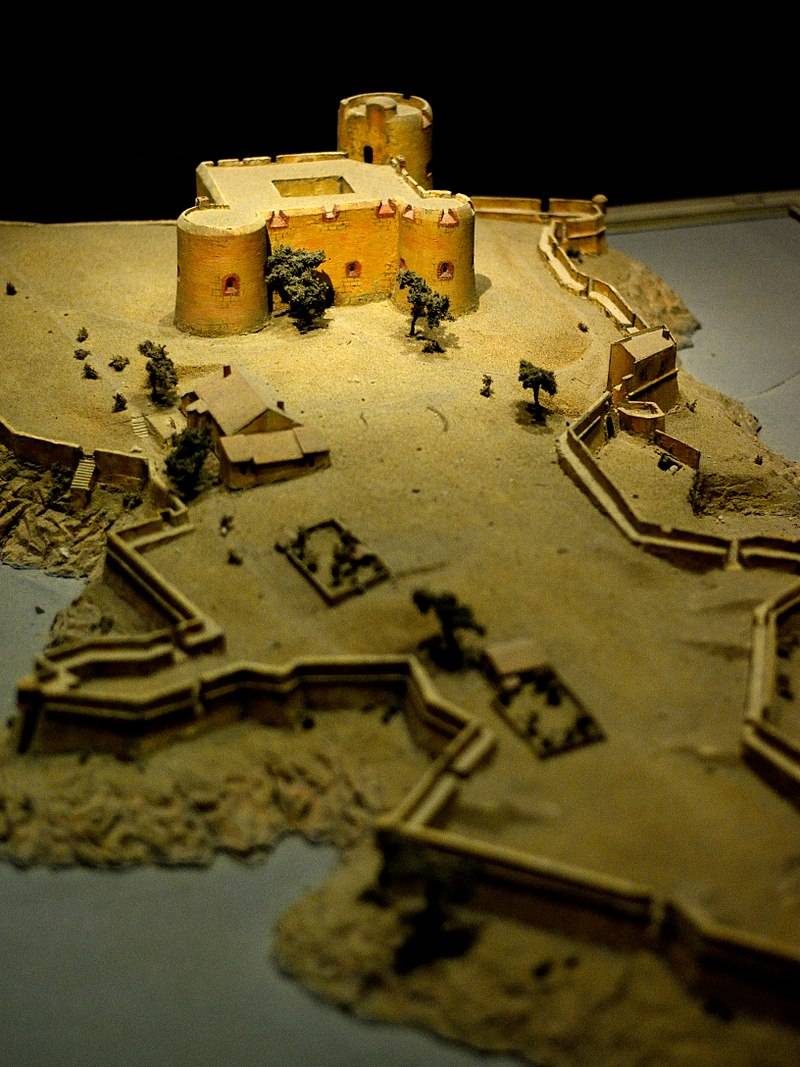 Illustrious If Castle
So you will be in the Museum of the Army, do not be lazy, go up to the fourth floor of its left wing and visit the Museum of Plans and Reliefs.

We are in Yandex Zen
Chernobyl notebook. Part of 3
Father told
23 comments
Information
Dear reader, to leave comments on the publication, you must to register.