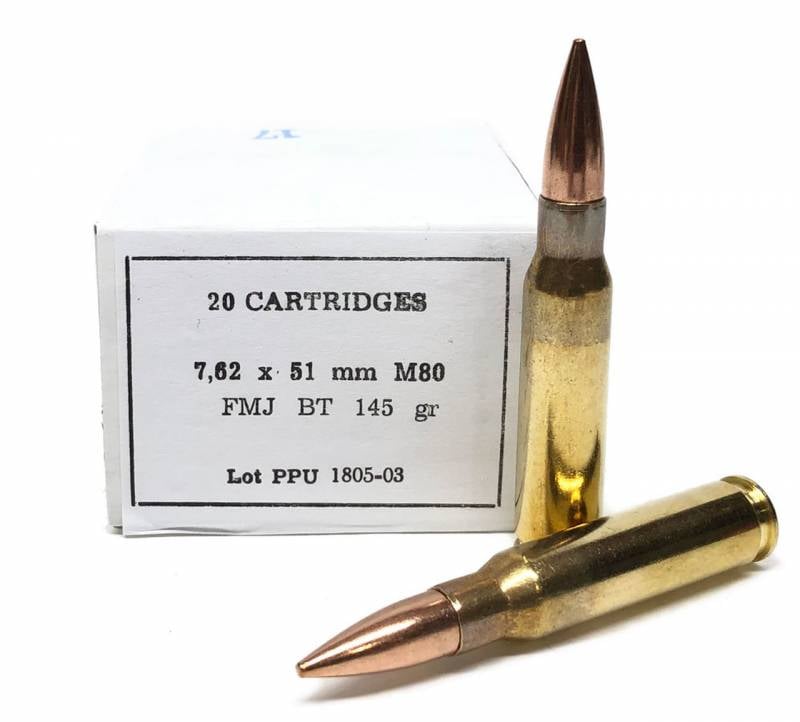 In 1954, the main rifle cartridge of NATO became the American ammunition 7,62x51 mm. It was planned to be used with rifles and machine guns, and soon a wide range of compatible weapons. However, after only a few years, the United States decided to abandon the rifles under this cartridge and replace it with a more advanced one. The result of the following work was the adoption of 5,56x45 mm ammunition.

The development of the T65 cartridge, the future 7,62x51 mm NATO, began at the turn of the forties and fifties on the initiative of the US Army. Existing .30-06 Springfield rifle cartridge, showing high performance, proved to be excessively powerful for advanced automatic rifles, and was also quite large and heavy. The army needed a more compact and lightweight, as well as a less powerful cartridge with close ballistics.

With the participation of several enterprises and organizations, a line of experimental T65 cartridges was created with different bullets and capabilities. After all the necessary tests, the ammunition was adopted by the United States, and then sold as a standard for NATO. 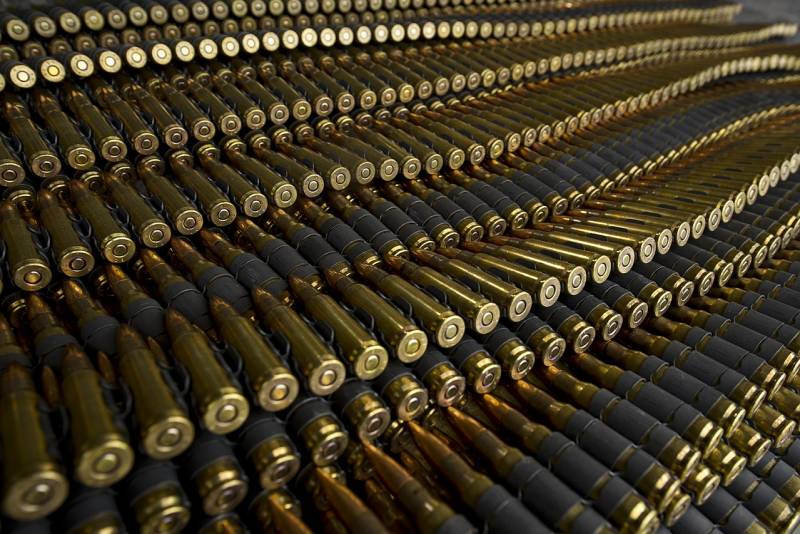 Weapon for the cartridge

The army ordered the development of new weapons under the cartridge of 7,62x51 mm - an automatic rifle and machine gun. The result of subsequent work was the adoption of the U.S. rifle M14 and machine gun M60. In addition, several countries developed the same munitions for foreign countries.

Even at the stage of work on the future M14, disputes began about the feasibility of using a rifle cartridge. From previous experiments it was known that a full-sized rifle cartridge is excessively powerful for hand-held automatic weapons and limits the accuracy and accuracy of fire. Nevertheless, such a cartridge at the same time gave certain advantages. 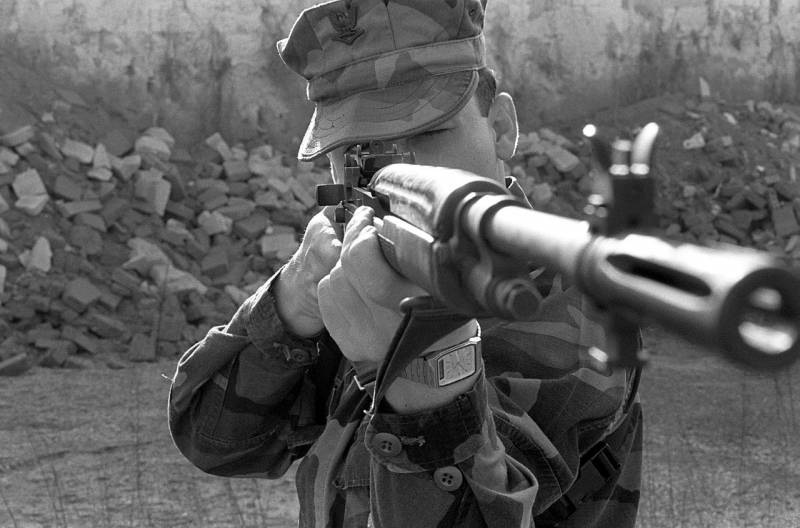 Marine with rifle M14. It is unlikely that he should shoot bursts
In 1959, the M14 rifle entered service. Its strengths were considered low weight and acceptable dimensions. The rifle cartridge gave a high effective fire range and had a good damaging effect. At the same time, the rifle could not shoot accurately in bursts: excessive recoil made it difficult to hold it, which led to increased dispersion. Also the problem was the capacity of the store (only 20 rounds) and the excess weight of the ammunition. An equipped store weighed 750 g. Accordingly, 13 stores with 260 rounds of ammunition weighed almost 10 kg.

In the early sixties, a complex in the form of an M14 rifle and a 7,62x51 mm cartridge hit Vietnam, where it showed its advantages and - even brighter - its disadvantages. As a result, the army stepped up work to create new weapons that fully meet modern requirements.

Since the late fifties, several arms companies have developed promising rifle systems based on an intermediate cartridge. The essence of the new concept was the use of small-caliber ammunition with increased bullet speed; It was also required to increase the rate of fire. The resulting automatic rifle in theory could show characteristics at the level of existing samples. 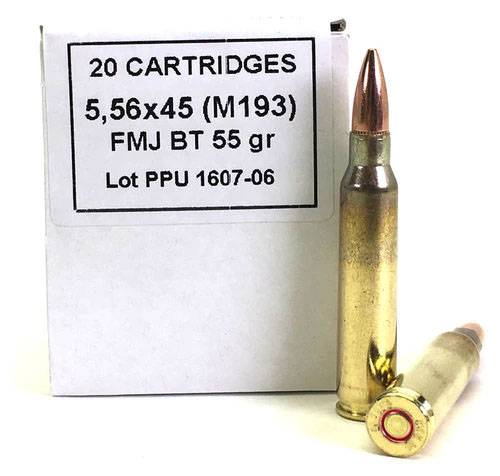 Cartridges 5,56x45 mm modifications M193
Together with others, ArmaLite and Remington Arms participated in the program. The first was developing a new rifle, and the second was attracted to develop a new cartridge. Later, their AR-15 rifle and .223 Remington cartridge showed advantages over competitors, won the competition and were recommended for adoption. In 1964-65 The U.S. Army began rearmament - new models were designated as M16 and M193.

Tests have shown that the new M16 rifle under the M193 cartridge shows the required accuracy and accuracy when firing in bursts and does not face the problem of excessive recoil. In addition, a smaller cartridge made it possible to optimize the dimensions and ergonomics of the weapon. There was a gain in the context of the ammunition: a magazine with 20 rounds weighed only 320 g. Thus, 10 magazines - 31 rounds - entered 620 kg. 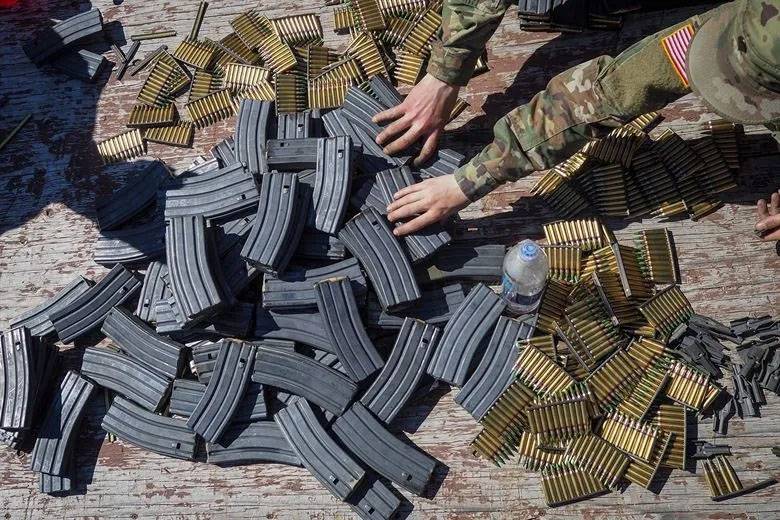 Photo: Justin Connaher
Stores for M16 rifles with 5,56x45 mm cartridges
Thus, for all the main parameters, the 5,56x45 mm cartridge and weapons for it, at least, were not inferior to previous samples of a larger caliber. All this led to understandable results. In 1964-65 The U.S. Army began rearmament with the M14 rifle to the newer and more successful M16, while replacing the cartridge. Ammunition 7,62x51 mm NATO was now planned to be used only with machine guns, but not with rifles.

Subsequently, the M193 cartridge was widely used in NATO countries. Initially, it was only about procurement or licensed production of ammunition. Then third countries began developing their own versions of the cartridge with one or another difference.

In the late seventies, NATO countries led by the United States conducted an extensive study comparing existing versions and modifications of the 5,56x45 mm cartridge. The winner of the competition was the Belgian version of the cartridge with a weighted bullet under the designation SS109. Soon, he was officially made the standard NATO ammunition. In the US Army, this product received the designation M885. 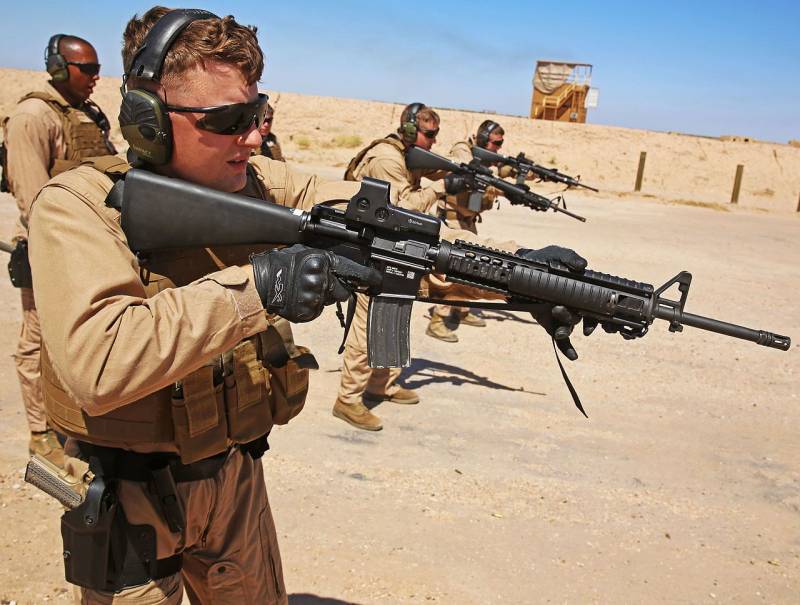 Photo: americanspecialops.com
M16A4 Riflemen
Over the following decades, the SS109 / M885 cartridge managed to become the basis for new munitions developed in several countries. A number of such products entered service, others went to the commercial market.

In the middle of the last century, all the leading countries headed for the improvement of infantry small arms by creating fundamentally new intermediate cartridges. However, in the United States this process was delayed, since the army first decided to rearm with a less powerful rifle cartridge. Soon, the disadvantages of such a solution became clear, which led to the intensification of work on intermediate cartridges.

The first version of the 5,56x45 mm ammunition was adopted more than half a century ago, later it was replaced by new modifications with improved characteristics. 5,56x45 mm NATO is still the main rifle cartridge of the United States and the countries of the North Atlantic Alliance, although there are already some prerequisites for its replacement.

In recent years, work is underway to create new intermediate cartridges capable of replacing the good old M193 / M885 in the future. However, the real results of such programs are not yet clear, and hypothetical rearmament remains a matter of the distant future. The 5,56x45 mm NATO cartridge remains in the US and other countries and continues to demonstrate its potential half a century ago.

We are in Yandex Zen
Sniper fire in local wars
Barrels in the style of Paramilitary
65 comments
Information
Dear reader, to leave comments on the publication, you must to register.