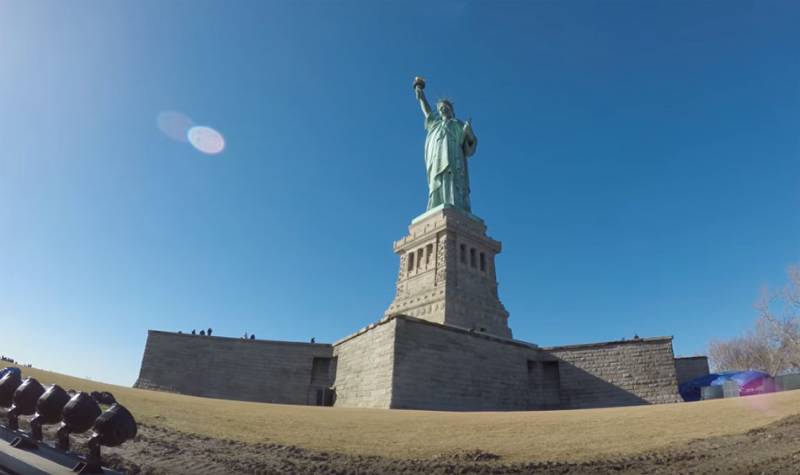 The engineering corps of the US armed forces came up with a rather unexpected idea of ​​truly epoch-making proportions. Pentagon experts suggest "once and for all" to solve the problem of devastating hurricanes attacking New York by building a cyclopean wall around the city, which will become a reliable protection against violent waves and winds. This project, which met with a far mixed reaction, has already provoked heated discussion in the circles of the American political establishment.


As a matter of fact, the military did not undertake anything to do such research. The research project, which is essentially a competition of concepts aimed at defending New York, started almost immediately after the city in 2012 was devastated by Sandy. According to scientists, such attacks by the elements on the Atlantic coast of the United States in the future will become more frequent and become increasingly fierce.

Presented by military engineers under the name "Alternative-2", the plan is simply the most ambitious. Well, of course, the most expensive. He envisages the construction of a giant wall around the Big Apple, which is a huge sea gate connected by artificial islands. She will have to rise in Lower New York Bay, between Sandy Hook and the Rockaway Peninsula. The total length of the defensive line should be 6 miles (9,6 kilometers). Estimated construction cost, which is expected to take 25 years - $ 119 billion!

It would seem that Donald Trump, whose idea of ​​building a wall on the border with Mexico regularly brings both houses of the US Congress to a nervous breakdown, should have supported this initiative wholeheartedly. However, there it was. The head of the White House called her "stupid, wasteful and harmful to the environment." And he advised the New Yorkers, instead of hoping for some miracles of fortification there, "to prepare buckets and mops." Obviously, for cleaning tons of ocean water from the streets and from his own houses ... Apparently, the President simply saw competition in his proposal for the Engineering Corps of his own kind - that’s got a hell out of it. It is clear that lawmakers, in which case, will allocate financing much more willingly to protect one of the main US megacities of the US than to a rather dubious construction site, which is being set up to isolate themselves from migrants from Latin America.

By the way, with regard to “stupid ideas” in the field of protection against superstorms, Mr. President can recall his own initiative - to destroy hurricanes in the ocean with the help of nuclear bombs. Who would say ... Very sharply, the mayor of New York, Bill de Blasio, dared to object to the head of state. In the debate on Twitter, he reminded Trump of the 44 city dwellers who had died during the Sandy strike and directly rebuked negligence for those whom the nation’s leader had "sworn to defend." Blasio called the president’s denial of climate change “not just dangerous, but deadly.”

However, there are quite reasonable objections to the megaproject. So, Scott Stringer, the financial inspector of the New York City Hall, pointed out a very significant point: the Great Wall might protect it from the rapid storms. However, it does not save the city from disasters inevitable as a result of somewhat less intense, but still dangerous floods caused by the constant rise in the water level in the ocean and increased tides. When designing a system of structures aimed at confronting the elements, all unpleasant prospects should be taken into account, Stringer believes. He does not dismiss the project from the threshold, but strongly recommends that the military “revise” it. In terms of construction costs, by the way, too.

The Engineering Corps still has time - they plan to publish the final version of the report on the surveys and their recommendations there and “transfer them to authorities” in 2022. Until that time, much could change - from the name of the US president to the attitude of Americans to the cost of protection from the elements. Recall that the same "Sandy" caused damage of $ 70 billion, not to mention almost two and a half hundred casualties throughout the country. In any case, it would be better if the US military really did something useful: for example, they would build walls in their own country, and not impose pseudo-democracy on strangers.

We are in Yandex Zen
Strangulation: the context, conduct and consequences of the American naval blockade of China
Geopolitical mosaic: Americans and Qatari planned a Russian chemical threat in Syria, and the Newtown shooter supposedly died a day before the tragedy in Sandy Hook
35 comments
Information
Dear reader, to leave comments on the publication, you must to register.