Kiev cannot decide what to do with military draft 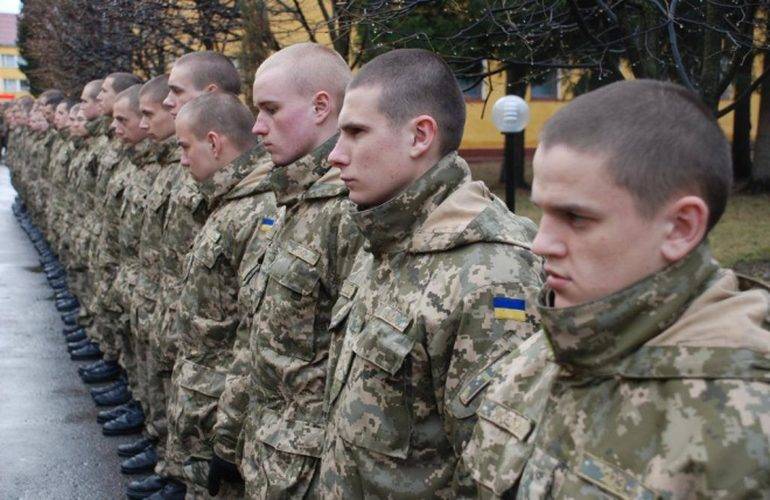 The decision of President of Ukraine Volodymyr Zelensky, who, by his Decree, returned the call for active military service to reach 18, and not 20 years, to put it mildly, did not add popularity either to himself or to the powerful "team" he leads.


Obviously, in connection with this, many of its representatives today make various proposals regarding how, nevertheless, it is necessary to organize the fulfillment by the citizens of the country of their military duty. From these revelations, the conclusion suggests itself that in Kiev today they don’t really understand what to do with the problem of manning their own armed forces.

Of course, the point of view of the current Minister of Defense of Ukraine, Andrey Zagorodniuk, is of most interest here. Who, if not him, should play the "first violin" in this matter? It should be noted that the views of the head of the defense department on the military service are quite peculiar. So, he believes that the first thing to do is ... reduce her term! According to the minister, this may make it impossible to avoid recruiting sites for those for whom the service does not coincide with "their life plans, because it lasts too long." Recall - to date, the duration of active military service in Ukraine is 12 months for those who have diplomas of education at the level of master and specialist, and 18 months for everyone else.

And, nevertheless, Zagorodniuk is sure that this period should become “much less”! Where else ?! How much then do you call, Mr. Minister - for half a year, for a month? “I’m here instantly - I’m running away, I’ll serve in the army ...” And this is in the context of the fact that the modern army requires professional training in the increasingly sophisticated models of equipment and weapons from soldiers. However, according to Zagorodniuk, the conscription service seems to be something like a fun shift in a pioneer camp, it should give “an absolutely unique life experience, useful physically and mentally.” Then, the minister is sure, it will be possible to “attract the general population to the army”. At the same time, he also speaks of the need for "quality training" of draftees and even their "service in combat units." How one is docked with one another in his head is completely incomprehensible.

It is especially worth noting that immediately after his appointment to a high post, Mr. Zagorodniuk, as far as is known, who did not wear a shoulder strap (especially soldier's) for a day, said that he sees his main goal as the abolition of military draft, as such. Then, however, he played back a little in accordance with the realities, but to this day he continues to insist that “urgent service should not remain in the form it is now, because it does not work ...”. There are serious doubts that with such a wonderful leader of the Ministry of Defense, she will ever “work” at all.

The fact that experiments with the conscription service system are rarely brought to good is eloquently testified by the rich world experience. In China, for example, for a more successful replenishment of the very vast ranks of the PLA, from this year they are moving to the order that is still working properly in Russia - the spring and autumn draft. Well, and accordingly, to the "demobilization" twice a year. But what the clumsy attempts to transfer to an exclusively professional army lead to clearly demonstrates the experience of Germany. There, they refused the call at all, canceling it in 2011. And what? There is simply no one to serve. But this is only one side of the problem. German human rights activists are sounding the alarm - according to them, the desperate Bundeswehr is "luring" minors to itself!

So, only in 2019 more than one and a half thousand young men and even girls under the age of 18 were accepted for service there. And in all the years that have passed since the abolition of military duty through the army barracks, at least 13 thousand "youngsters" have passed, according to human rights activists. However, they all got there exclusively on a voluntary and contractual basis. Nevertheless, the guardians of “democratic legal norms” accuse the “rude soldiers” of “costly and harmful militaristic propaganda”, which entices young creatures in the military network. But you could, like normal Europeans, go to gay parades!

One way or another, but before starting to innovate in the canons of military service that have been established for centuries, any country should think hard. In particular, and over the one who is at the helm of that department, which is entrusted with its defense and security.

We are in Yandex Zen
Situational analysis of the death of the MH17 flight (Malaysian Boeing 777), made on the basis of engineering analysis from 15.08.2014
Results of the week. “In our cooperative, the board is always agreed”
25 comments
Information
Dear reader, to leave comments on the publication, you must to register.