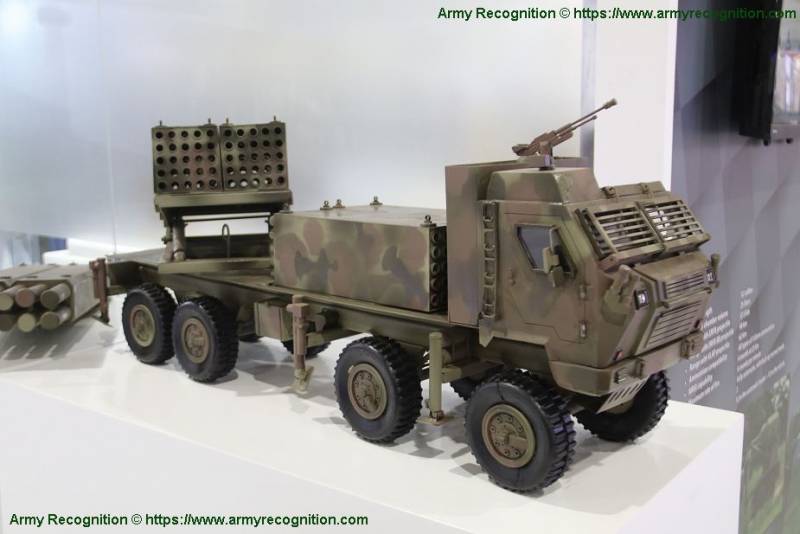 The Serbian state-owned company Yugoimport SDPR offers foreign customers a wide selection of various weapons and equipment of its own production. Since last year, the product catalog contains the promising modular multiple launch rocket system "Tamnava". Its characteristic feature is the ability to use shells of caliber 122 and 267 mm with increased efficiency.

Materials on the Tamnava project were first presented in December 2018 at the Egyptian exhibition EDEX. At the Yugoimport stand there were advertising posters and a large-scale MLRS model with two sets of packages for different types of missiles. At that time, it was argued that a full-fledged prototype should soon appear, and if orders were available, mass production could be launched.

Soon, the Serbian industry fulfilled its promise and in June demonstrated the prototype “Tamnava” with all the necessary equipment. Specialists and the public were able to inspect the product and evaluate its design.

In October 2019, a military parade was held in Belgrade in honor of the 75th anniversary of the liberation of the city from Nazi invaders. In the parade involved various serial and promising samples, including new multi-purpose MLRS.

The main objective of the Tamnava project was to create a modern MLRS capable of effectively delivering strikes with various types of rockets. All this was achieved through the use of modern components and a modular architecture that allows you to replace the basic structural elements. 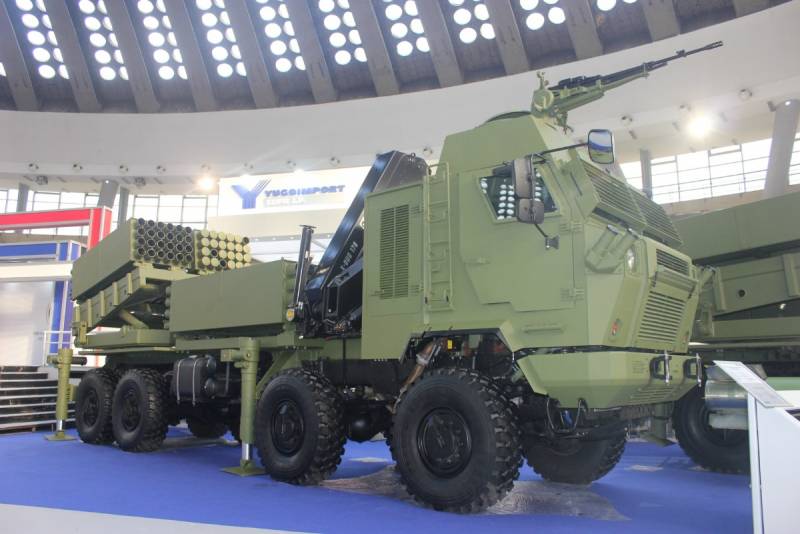 Experienced "Tamnava" at the exhibition in 2019. Photo by Yugoimport SDPR / yugoimport.com
At the heart of the "Tamnava" in its current form is the four-axle chassis "KamAZ-6560" of Russian production. An armored cabin is installed on it, and behind it is a platform for the target equipment. On the cargo area are sequentially located their own crane, replaceable modules with spare ammunition and launcher. The platform is equipped with jacks for hanging.

In the rear of the machine placed launcher with remote control. Provided horizontal aiming within 110 ° to the right and left of the axis and vertical from 3 ° to 60 °. The installation has a movable frame with mounts for mounting two launch modules with missiles.

In front of the launcher, a space is provided for transporting two additional modules that are moved by crane. After the main ammunition is fired, the crew can remove the empty modules and replace them with spare ones for a new salvo. Then MLRS needs the help of a transport vehicle with new modules.

The launch module is made in the form of a rectangular protected unit with longitudinal guiding tubes for rockets. Two options for such modules are offered. One is designed to store and launch 122-mm missiles and carries 25 such products. Rockets caliber 267 mm fit in the amount of six pieces. Thus, the ready-to-use ammunition of the Tamnava MLRS includes 50 shells of 122 mm caliber or 12 267 mm caliber. 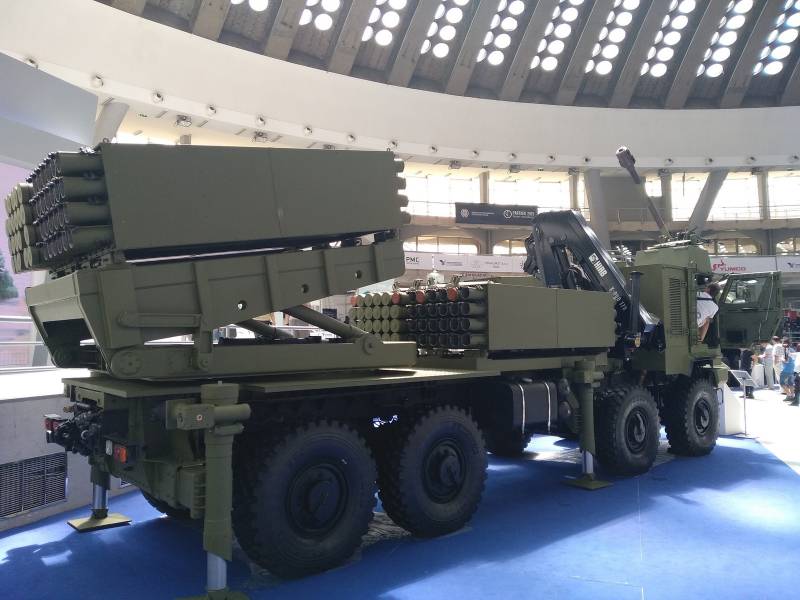 View from a different angle. Photo Yugoimport SDPR / yugoimport.com
The combat vehicle can use all existing 122-mm rockets of the type of ammunition of the Soviet "Grad". Several rockets of 267 mm caliber with different characteristics and capabilities are also offered. When using shells of a smaller caliber, "Tamnava" hits targets at ranges up to 40 km; range of 267 mm products - up to 70 km.

The fire control system includes inertial and satellite navigation, as well as a radio station for data exchange. Calculation of data for firing and aiming control are automated; modes for the use of shells of various types and calibers are provided. Shooting is single, series or full ammunition with an adjustable interval. Declared high accuracy achieved by jacks, perfect LMS and guidance drives.

The crew consists of three people and is located in the cockpit. Its safety is ensured by bulletproof armor and glazing. The windshield is additionally covered by a folding grate. During preparation and during firing, the crew remains in its place and performs all operations remotely. If necessary, the remote control can be removed from the machine and used with a 25th cable.

For self-defense, the crew has a heavy machine gun on a characteristic cabin superstructure. Smoke grenade launchers are also provided on the forehead of the cabin. 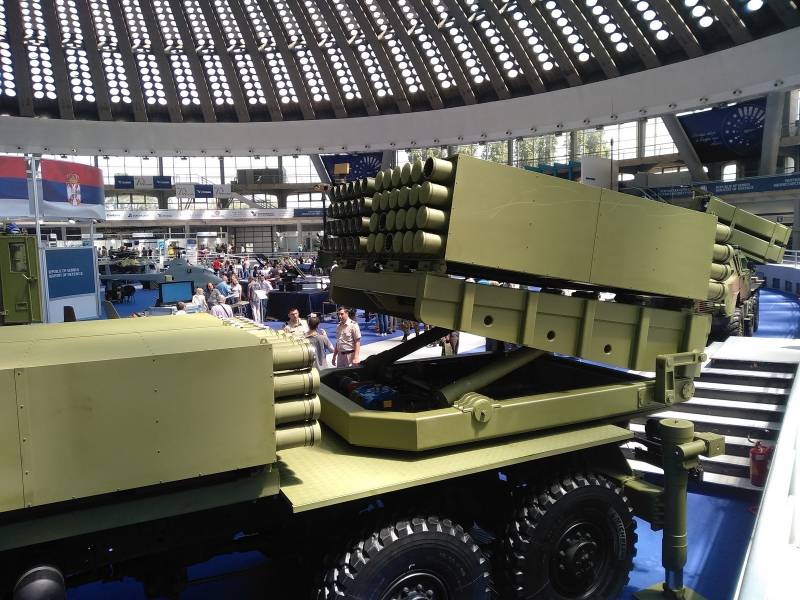 Launcher in the fighting position. On the left are modules for additional ammunition. Photo Yugoimport SDPR / yugoimport.com
Due to the specific layout, the Tamnava MLRS is distinguished by its large dimensions. The length of the combat vehicle is 10,5 m with a width of 2,6 and a height of 2,8 m. The combat weight with the heaviest ammunition configuration reaches 35 tons. At the same time, the vehicle is able to move along the highway and off-road, overcome obstacles, etc.

The Tamnava project is based on several interesting ideas that can influence combat qualities. With the help of standardized launch modules, this MLRS can use a wide range of shells of two calibers. At the same time, the machine carries both ready-to-use and additional ammunition, and is also capable of independently replacing modules for a new salvo.

Other design features should also be noted. This is the use of a load-lifting highly mobile wheel chassis, an armored cab, maximum automation of processes, etc. Such solutions are actively used in almost all modern projects and have long shown themselves to be in the best possible way.

"Tamnava" stands out in the line of MLRS Serbian production, offered for export. In terms of calibers, it can only be compared with the M-87 Orkan system, which carries 12 262 mm caliber missiles with a range of 50 km. Only the M-94 Plamen-S system of 128 mm caliber has the ability to transport additional ammunition. Otherwise, the new sample is unique and compares favorably with older ones. 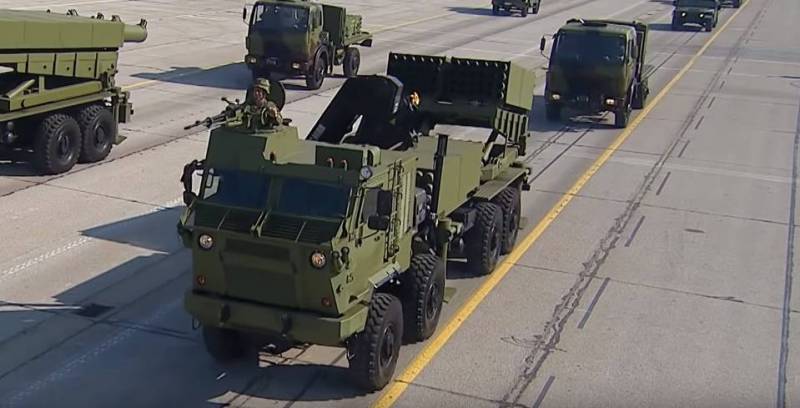 "Tamnava" in the parade. Photo by the Ministry of Defense of Serbia
An important advantage of the MLRS "Tamnava" is the ability to use 122-mm rockets of all existing models. Such ammunition is very widespread around the world, which has known consequences. Any army with stockpiles of such missiles could become a potential customer for Tamnava - for the benefit of itself and its manufacturer.

From a technical point of view and in its combat qualities, the new Serbian MLRS Tamnava is of great interest. This sample is quite capable of finding a place in the armies of different countries. However, bringing the system to the market can be very difficult.

First of all, the Serbian army can order a new MLRS. Moreover, the Serbian military has already shown “Tamnava” at the parade. However, a prototype was involved in the events, and mass production has not yet begun.

“Tamnavoy” may be interested in foreign countries who want to upgrade rocket artillery and have large reserves of 122-mm shells. In this case, the new equipment will allow for re-equipment with maximum effect and minimum expenditure. However, negotiations on export contracts have not yet been reported.

In general, the new Serbian development looks quite interesting and promising. She is quite capable of finding her place in the armies of different countries and increasing their combat effectiveness. However, Tamnava is not the only model of its kind in the market, and it will have to face serious competition. Perhaps Yugoimport will be able to find customers, and then the new MLRS will realize all its advantages.

We are in Yandex Zen
Overview of artillery. Part of 4. Rockets: from square firing to precision strike
Heir "Katyusha"
33 comments
Information
Dear reader, to leave comments on the publication, you must to register.