In the service of Russia. Peter Khristianovich Wittgenstein

July 21 2012
5
In the treatise “The Art of War”, Sun Tzu described a universal formula for success for any battle: “That military leader wins, who has a good army and who is not disturbed by his sovereign decree.”

Not once or twice this judgment was confirmed by the biographies of the generals. She found her confirmation in the life of a skilled Russian military leader Peter Christian Wittgenstein.

Peter Khristianovich was born in 1768 in the city of Nizhyn in a noble family belonging to an ancient Germanic family. At twelve, he was enrolled as a sergeant in the Semenov regiment. The young age of determining the sovereign's service is typical for that time, it was used as a kind of legal maneuver for circumventing the “Table of Ranks” 25-year service life. Separate noble children recorded the service from infancy, and in 25 years, a young nobleman completely fulfilled his duties before the state. Wittgenstein the opportunity to leave the army did not take advantage.

In 1789, he began a real service with the rank of sergeant of the equestrian regiment of the Life Guard.

Through 4 of the year, in 1793, Peter Wittgenstein was promoted to the rank of Prime-Major in the Ukrainian Light Regiment, and in 1794 he sought transfer to Poland to quell the uprising under Kosciuszko. Here he brilliantly proved himself in the battles of Ostrolenka, and during the assault on the outskirts of Warsaw.

After the defeat of the Polish uprising, Peter Hristianovich came under the command of Count V.A. Zubova and in the corps are participating in the company against Persia. For services to the capture of Derbent, Wittgenstein was honored to personally deliver the keys to the city to St. Petersburg.

Already in 1798, Peter Khristianovich was given the rank of colonel, and a year later he was promoted to major general and appointed to command the Elizavetgrad hussars. With the accession of Paul I falls into disgrace and sent to the emperor to resign. In 1801, Alexander I is enlisted in the army by the commander of the same hussar regiment. 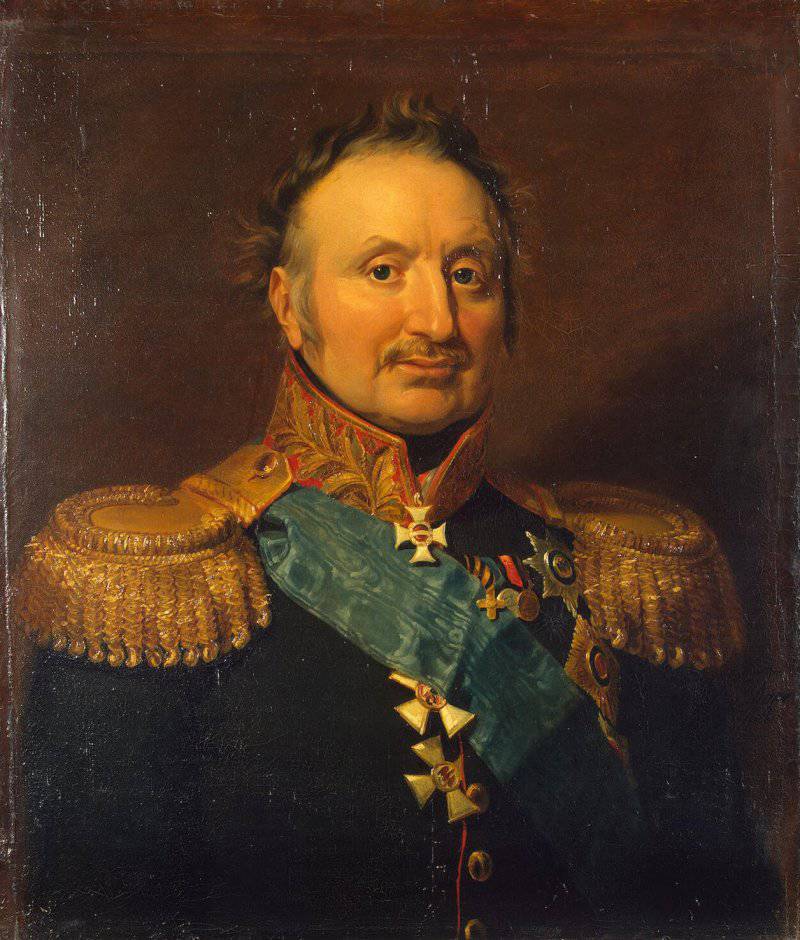 Peter Khristianovich collided with French troops for the first time in 1805, fighting as part of coalition forces. He served under the command of Bagration and Miloradovich. In the rearguard battle near Amstetten, three cavalry attacks of the cuirassiers Murat fought off. In the battle of Visau, he decisively defeated the French with only three cavalry regiments: more than 400 of the French were taken prisoner. He also distinguished himself in the battles of St. Pölten, Rausinice, Krems, Stremberg, and fought against the Turks of Moldova. On account of the merits of the company in Europe, he was promoted to lieutenant general and was appointed chief of the Hussar Life Guards Regiment. During the Russian-Swedish war, 1808-1809 gained experience in command of infantry; at the head of a detachment numbering in 9 thousand guarded the coast of the Gulf of Finland.

By the beginning of World War 1812, under his command consisted 1th Infantry Corps, covering the right flank of the 1th army of Barclay de Tolly.
Upon arrival at the fortified camp at Drissa, it became clear that the plan proposed by Pfule did not work and the army needed to join the army Barclay de Tolly marched into Vitebsk, and the Wittgenstein corps as part of 20 thousand soldiers had to cover the northern direction - the ways of possible offensive on Petersburg.

Wittgenstein was opposed by the corps of Marshal Oudinot and Marshal Macdonald. Realizing the futility of trying to defend a stretch of road the length of 600 miles, Wittgenstein decides to split the corps of the French separately.

The fighting developed as follows. Marshal Oudinot, seeing the difficult situation of the Russians, sought to cut off the Wittgenstein 1 infantry corps from the rear areas of the Pskov highway. To do this, the French crossed the Dvina at Polotsk and, taking the city, moved in the direction of Sebezh - Pskov. Peter Khristianovich made the decision to attack the Udino corps, despite the enemy’s considerable superiority in numbers, which, according to various estimates, ranged from 8 to 10 thousand.

The battle took place near the village of Klyastitsy and lasted 3 day from 28 to 30 July. In the very first clash, the vanguard of General Kulnev (4 of the hussar squadrons and 500 of the Cossacks) defeated the 3 regiment (12 of the squadrons) of the French cavalry. On July 30, Udino’s troops were driven out of the village of Yakubovo and forced to retreat to Klyastitsy. The continuation of the attack required the Russians to force the river Nyshta, otherwise the initiative would have been lost. Realizing that the continuation of the battle threatens with inevitable defeat, Udino orders his artillery to burn down the bridge across the river, thereby knocking down the Russian offensive. However, the bold attack of the 2 Battalion of the Pavlograd Grenadier Regiment over the burning bridge, as well as the Kulnev bypass maneuver, compel the French to retreat beyond Driss to the captured Polotsk.

On August 1, when crossing the Drissa during the pursuit of the French, Major General Kulnev’s squad was ambushed. The general himself died, the survivors retreated, but the French pursuing under the command of Verdier fell into a similar situation and were defeated by the main forces of Wittgenstein. In this battle Peter Khristianovich was slightly wounded on the cheek.

As a result of the battle near Klyastitsy, the offensive of Napoleon's troops against St. Petersburg was thwarted, the first major victory was won, and Peter Wittgenstein became known to all of Russia as "the savior of Petrova Grad."

A further offensive against the French, however, failed. In the first battle of Polotsk, Wittgenstein was defeated by the united forces of Udino and Saint-Cyr who came to his rescue. The corps of the latter was removed from the main direction and weakened the main forces of Napoleon.

After the first battle near Polotsk, battles in the north acquired a positional character. The troops of Saint-Cyr and MacDonald guarded the communications of the Great Army. Wittgenstein saved up his strength and replenished his troops at the expense of the St. Petersburg and Novgorod militia.

In October, the Russian army increased in number to 40 thousand people and resumed active operations. October 19 was released Polotsk, and 30 suffered another defeat to the French - this time the connected corps of Saint-Cyr and Victor. 7 November Vitebsk released.

Next, Wittgenstein receives an order from Kutuzov to follow Borisov to join up with Chichagov’s army and the encirclement of the retreating French. Maneuver Peter Khristianovich failed. Historians point to different reasons: from tactical miscalculation to unwillingness to take risks in clashes with Napoleon himself. Be that as it may, Kutuzov to a greater degree blamed Wittgenstein. Despite this setback, the authority of the “savior of Petersburg” was not shaken. 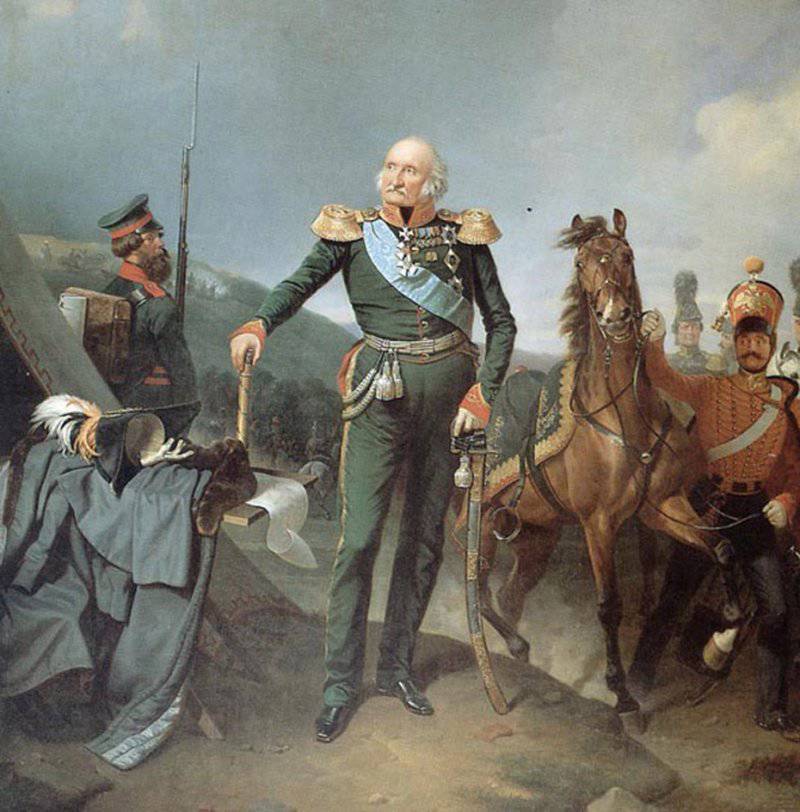 During the foreign campaign of the Russian army, the troops under the command of Peter Khristianovich occupied Koenigsberg, and later Berlin, ahead of the corps of Eugene Beauharnais. And on May 3, 1813, Beaugarne was defeated under McCurn.

In Lutzen, at the insistence of Alexander I, Wittgenstein took the supreme command of the army from Tormasov's general-in-cavalry who temporarily headed her after Kutuzov. However, the Russian emperor and the Prussian king are not in a hurry to move away from the army - the laurels of the victor of Napoleon are too valuable a trophy for the royal vanity and political weight.

In the battle of Lutzen, the need to coordinate every step with the sovereigns, in many ways, became the cause of defeat. In addition, Wittgenstein was opposed by Napoleon himself, commanding superior forces. As a result of the battle, the Russian-Prussian troops retreated, and the French suffered more heavy casualties.

The next major battle of the Sixth Coalition was the battle of Bautzen. Here the bet was made on a favorable defensive position and the corresponding course of action. The main ally in this battle for Napoleon was Emperor Alexander I the Blessed. It was he who at the critical moment of the battle insisted on sending a reserve to the place of a false attack, which was what Bonaparte wanted. Only the lack of a sufficient number of cavalry in the French army allowed the allied forces to retreat in an organized way. Of course, Wittgenstein was to blame for the defeat. On the advice of General Miloradovich, he withdrew the powers of the Supreme Commander, who passed to the Minister of War Barclay de Tolly.
As commander of individual units, Wittgenstein took part in the final battles of the foreign campaign.

After the end of the war with Napoleon, he led the garrisons in Courland and Livonia. Since 1818, the commander of the 2 Army and member of the Council of State. In the 1828 year, with the start of the next Russian-Turkish war, already in the rank of field marshal, Wittgenstein was appointed commander of the 100 Russian army operating against the Turks in Europe. At the initial stage, the fighting developed quite successfully. Russian troops quickly occupied the Danube principalities, but they faced fierce resistance in the fortresses: Varna, Silistria and Shumly. The pace of attack was slowed down, which caused displeasure of Emperor Nicholas I.

After the seizure of Varna in 1829, Peter Christian Wittgenstein asked for dismissal for health reasons - the consequences of a severe wound received during the Napoleonic wars.

The last years of his life Petr Hristianovich spent at his estate Kamenka, where he was given the title of hereditary prince of the Most High.

In the 1843 year on the way abroad - in Lviv - Peter Khristianovich died. Buried in the estate of Kamenka, Podolsk province.

With the beginning of the First World War, a wave of Germanophobia is rising in Russia. Petersburg is renamed Petrograd, the Russian Germans are beginning to leave the country. People with German surnames are suspected of spying for Germany. Painfully familiar situation. The descendants of the heroic general also did not escape the common fate. The surname Wittgenstein sounds unreliable.

During World War II, the great-grandson of Russian General Peter Christian Wittgenstein - German military pilot Ludwig zu Sein-Wittgenstein had already fought in the ranks of the Luftwaffe. Takova, the irony of the military fate of generations, is such a difficult one история long-suffering Europe ...