You need to fight for memory 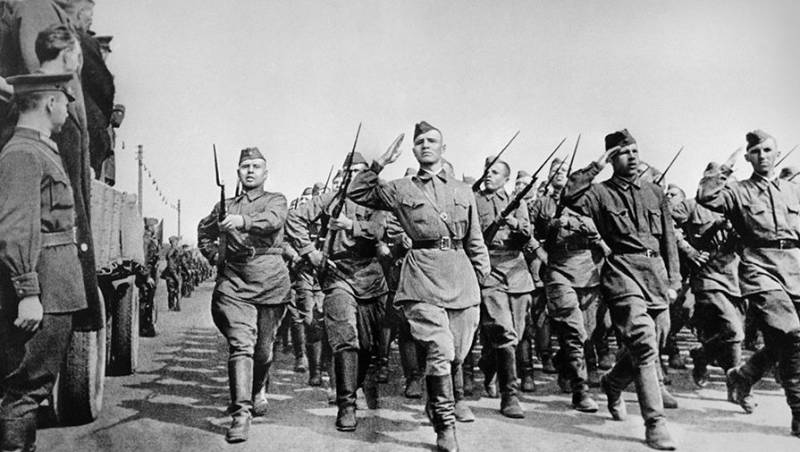 History winners write. There is probably no person who does not know this expression. It is difficult to argue with this statement. Indeed, it is the winners who have great opportunities to truthfully tell about everything that happened, objectively, on the basis of documents and other available evidence.

Understanding of historical processes from the "truth-seekers" from the Internet

For many decades, they have been proving to us that our history connected with the Great Patriotic War is just a well-written play. That, in fact, everything was exactly the opposite. And, worst of all, many people have appeared among us who agree with this.

Personally, I have not met a person who would never have heard or read the opinion about the unnecessary victory over fascism. “If we had not won, we would have been drinking Bavarian beer now, and not the bourd that we call beer” ...

I’m not talking about politicians, public oppositionists or traitors who fled abroad. I’m talking about ordinary citizens of Russia who do not really understand what is happening. About those who "fundamentally" do not watch TV. By the way, somehow imperceptibly it was “not watching TV” that became a kind of test for a correct understanding of history in Russia. You can’t trust the TV, but you can blogger.

Where does the “new history” of the Second World come from

But let's look at the story written by us, the winners, on the other hand. Inside out, if you will. Yes, the story we wrote. In my opinion, the origins of those falsifications that breed almost daily in Western countries lie precisely in us.

Those who are 55-60 years old, remember childhood. How many of us have not watched the beautiful Polish series Four Tankers and a Dog? Who was not sure that the Poles were on our side? That they, the Poles, consisted of "Yaneks", "gusliks" and other heroes of this series?

And how then was the Craiova Army perceived? Yes, they were partisans who independently, without our help, fought against fascism. About the same as the army of Joseph Broz Tito in Yugoslavia. Allies in the struggle, although they did not accept the ideas of socialism.

We bashfully mentioned the traitors from among the Soviet people as a very small group, deceived by fascist propaganda, about illiterate people who, if they were to explain the situation, would return to us and fight on our side.

It was strange for me, then a boy, to see the reaction of the partisan grandfather, who beat the fascists in Belarus, to the Ukrainian movement, which was a lot in the most famous Soviet pre-war films. Grandfather, then a 50-year-old man, simply left at the first words in this language or turned off the TV.

It was later that I learned that my grandmother, my father’s mother, was not my own. That it was Ukrainians who shot their grandmother as the partisan’s wife. It was later that I found out that the inhabitants of a small Belarusian village where my father grew up were driven to the board three times to burn alive. And Ukrainians also wanted to burn my dad. And they saved ... the SS men. They banned the execution, because they knew that the partisans simply would not let them leave in this case.

We, the Soviet ones, have been and remain internationalists who take great care of the image of “friends”. We were silent about the fact that the French fought for Hitler, and only a small part was against it. Although, even then I had questions. For example, why we had partisans, but in France they talk about the Resistance. And so it was with all our "friends."

Even today, this trend exists. Even today, any boy will tell you that we fought with the Germans. The rest, Hungarians, Romanians, and others, it seems, were not there. We even set monuments to the poor occupiers. Near the graves of those they killed. Roman Skomorokhov wrote a lot about this on VO.

How the "new history of war" was born

If the winners take such a position, then what should the conquered do? What should be done to those whose fathers fought on the side of Hitler? They also make up a story. In the beginning, for myself, for my family, for my village. They tell fictional stories about the fight against the Germans. They remove the memory of the atrocities of their own fathers.

After all, it was then that the version of what they fought under duress appeared. There were no volunteers among the punishers. And the atrocities, which are still remembered, were actually carried out by disguised NKVD officers to discredit the patriots. And we swallowed it! This was against our upbringing.

Even the fact that this story made up by our enemies has become “real” for many, we are to blame. Is it a shame? Of course, we became grave diggers of the memory of our fathers and grandfathers. They began without even realizing it. But let's be honest to the end.

Side effect of the collapse of the USSR

After the collapse of the USSR, it was here that we “broke the sewer”. How much dirt surfaced then! It is dirt. How many versions of the famous events of the war were then discussed! Remember the exploits of Zoe Kosmodemyanskoy or Alexander Matrosov. Remember the well-made film "Bastards." Remember the "Shtrafbat". Remember the stories that appeared from somewhere about the atrocities of the NKVD, about hundreds of executed by SMERSH.

Our, excuse me, shit has helped to come up with everything that causes our indignation today. That "family" story, which was invented for their own consumption, became the "real" history of the war. Remember the Ukrainian president Poroshenko, whose father "found out in a concentration camp what real coffee is."

"New History" has long been no fiction of politicians and ideologists. I often hear that people and politicians are different people. Let's not fool ourselves. Politicians - this is part of the people. Does anyone doubt that today in Ukraine, Poland, the Baltic countries and some other countries, people sincerely believe in what the local “historians” are talking about?

Why do they believe it

I sometimes communicate with citizens of these countries. It is hard to believe, but even those who once studied in Soviet schools, today the vast majority believe precisely their historians. To all my arguments in favor of the “old” history, the standard answer follows: “It’s just that you still do not have democracy and the government is hiding the uncomfortable truth.”

Russia has opened part of the archival documents. The documents relate to the liberation of the Polish capital. Everyone can see them on the website of the Ministry of Defense of the Russian Federation. These are facts that are hard to argue against. But will they be perceived precisely as facts? It is doubtful.

And you know why? Yes, simply because for most Poles the site of the RF Ministry of Defense is an empty phrase. How many readers of this material watched the site of the Polish MO? The average layman does not like to look at documents. It is enough for him that on this occasion they will say on television or write in the press.

An example is already there. I’m talking about the response to the publication of the Deputy Minister of Foreign Affairs of Poland, Pavel Jablonski.

“On January 17, 1945, the Red Army entered Warsaw, destroyed after the Warsaw Uprising, when the Red Army stood and watched from the other side of the Vistula how Warsaw was destroyed. This was not liberation, it was the bringing of a new communist captivity, and we must remember this, respecting, of course, individual soldiers. ”
I think this quote is enough to understand the position of Poland. “You're lying.” I would not be surprised if, in a few years, a version appears that the Polish uprising had triumphed. And the Red Army destroyed the victors exhausted by the struggle against the fascists in order to appropriate the victory for themselves.

How should a simple Polish citizen, who knows the history of the Warsaw Uprising at the school level, to perceive a phrase from the quotation that I quoted above. "... The Red Army stood and watched from the other side of the Vistula, how Warsaw is being destroyed." How would we perceive something like this if the matter concerned our capital?

A fight for memory will be brutal

We often hear the expression "hybrid warfare." A universal explanation of everything that happens today. In my opinion, today we are starting a “hybrid war” for the memory of our fathers and grandfathers. Yes, a war whose outcome is unknown. A war that can develop into a hot phase, or can subside to a new aggravation in the future.

The war for memory is a war for Russia. True, any, convenient or inconvenient for us, today, is a guarantee that the tragedy will not happen again. As long as we remember the truth about that war, while we see the mass graves of soldiers of that war, as long as there are memorials of concentration camps, while there are documents of that era, we exist.

They will always blame us for all mortal sins. Just because we won, and they surrendered to Hitler, licked the ass to the Nazis in order to preserve their own skin. So what? No matter how much the jackal Tabaki shouted that he was brave and strong, he was always just a jackal. He does not become a tiger or a man. He is always destined to receive kicks from stronger or bolder ones.

As for Poland, Ukraine, the Baltic states, the cat scratches its ridge. How many times in history has this happened! At first everyone went to the East. Then they ran amicably back from the received kick. And all this happened on the territories of those who today most of all advocate for our death ...

We are in Yandex Zen
Situational analysis of the death of the MH17 flight (Malaysian Boeing 777), made on the basis of engineering analysis from 15.08.2014
Results of the week. “In our cooperative, the board is always agreed”
289 comments
Information
Dear reader, to leave comments on the publication, you must to register.