Lexington and Concord: voiced slap in the face to elite units from civilian hats 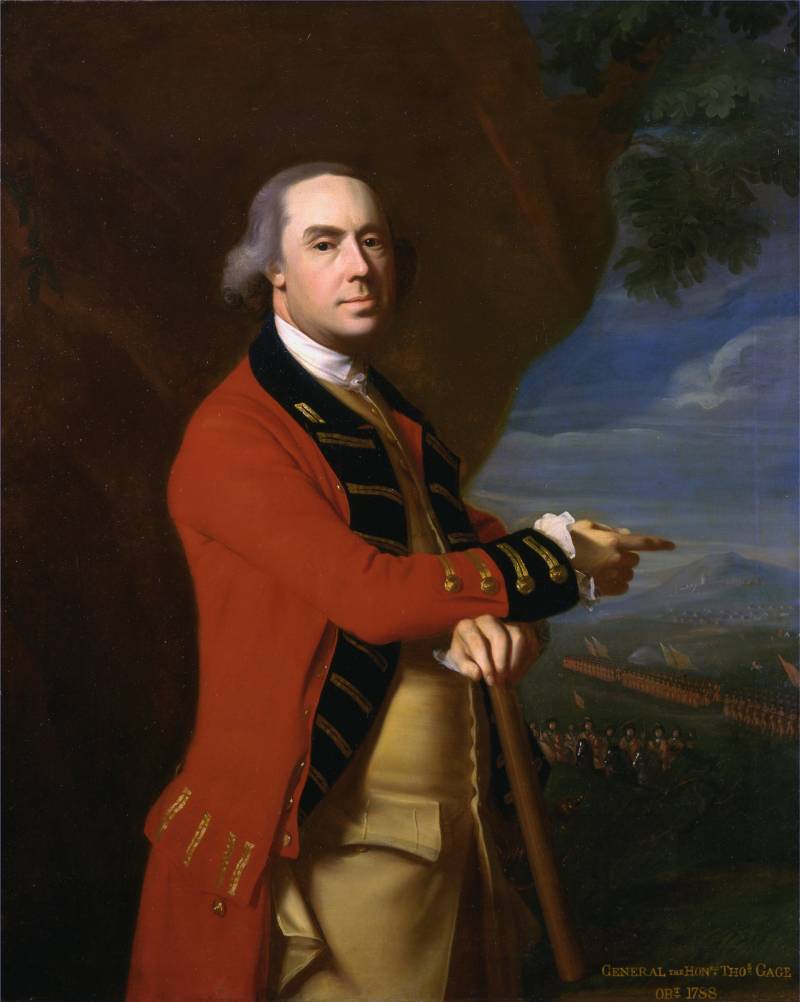 Thirteen British colonies in North America began to rage since the 1760s. Then the Seven Years War had just ended. The Empire won it, but paid for it with a solid hole in the budget. To close it, the government in London imposed additional taxes on the colonists. Guided by this principle: “You have the royal army there, which only yesterday protected you from the French, and continues to protect you from the Indians. It is time to pay for its maintenance. ”

The colonies were in no hurry to agree with these arguments - give us, they say, at least a representation in parliament, and not just a legislature of self-government, then we'll talk about taxes. In London they answered that the parliament for America is a bit greasy. Well, in response, the colonies boycotted the collection of duties by all means - from mass smuggling of goods to riots on the streets.

The process, of course, was uneven. Some colonies were more radical, some, like Georgia, which had problems with the Indians, were more calm. But after the adoption by the British of the “Intolerable Laws” (among which was, for example, the act of closing the Boston port) called upon to curb the presumptuous radicals of Unbearable Laws, America was already blazing for real.

The colonists actually went into a state of open rebellion, having convened an illegal, from the London point of view, Continental Congress, and having produced a number of smaller congresses - they replaced the local "official" legislatures. These "mini-congresses" immediately began to arm themselves, creating militia units.

Money for weapon and ammunition came from emergency fees and donations from local merchants. The latter were not always voluntary - a rich man who refused to pay could very well turn into an object of persecution. Having become the persona non grata, he quickly lost all business contacts and eventually went bankrupt. Therefore, it was cheaper to pay.


One of the centers of the rebellion was the Massachusetts colony and its capital, Boston. Thomas Gage, the man who fought in America with the French in the Seven Years War, was appointed the governor of this difficult colony. It was believed that he knows the colonies better and is able to cope with the crisis.

These ideas soon crashed into reality. Gage, who knew the situation on the ground, was inactive just because of his understanding of how bad everything was. The governor could not influence practically anything - he invariably met at best with passive resistance. And in the worst case, it turned to open disobedience. Dosed use of military force in such conditions would only aggravate the bitterness of the local population. And in order to conquer Massachusetts again, Gage simply did not have enough resources.

The governor proposed that the King and Parliament repeal the Unbearable Laws - this would weaken the radicals. And, at the same time, send more soldiers to America to really take control of the colonies. But in London, it was believed that the matter was only in the sporadic riots of Boston mob. It is enough to show firmness - and the colonists will retreat.

Gage received angry letters from England. He should have immediately shown the result - well, or at least something that could be given out as such. London demanded that the governor at least arrest members of the local Massachusetts congress.

Gage knew that the chances of this were small - if he sent few soldiers, they would simply be stoned, and if there were many, then a big noise would rise and the congressmen would have time to escape. Therefore, he chose, as it seemed to him, the middle ground — a raid on the militia's weapons and ammunition depots located in the cities of Worcester and Concord.

The raid started late in the evening on April 18, 1775. 700 British soldiers - grenadiers and light infantrymen - advanced from Boston to their intended target. The British counted on secrecy of movement and surprise - and he failed at the very beginning of the operation.

Of course, it was impossible to hide the nomination of such a mass of soldiers in a city where the British were closely watched by the whole population. To be precise, the Americans knew about the British intention to go somewhere and do something the day before the nomination - the English sergeants did not always keep their mouths shut. 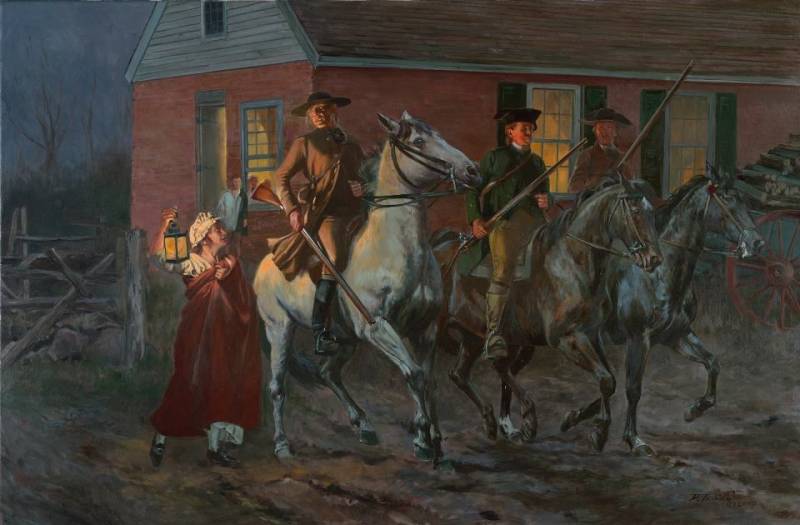 Militias leave home to go where the British are seen
The troops did not move very fast - and from time to time they stopped to receive and consume provisions. The British themselves must have realized that their plans were revealed - as the column advanced, the locals lit lights. Such clarity and speed of occurrence of the latter clearly said - this is a warning system.

In addition to the lights, horse-drawn couriers were put into operation. They rushed to neighboring villages and woke the militias. One of these couriers - Paul Revere - forever entered the American pantheon of national heroes. He managed to wake Samuel Adams and John Hancock, the leaders of the American Revolution, while hiding from the British patrols, and prevent the British from arresting them.

Therefore, when the British began to approach the places of the alleged deployment of weapons depots, neither weapons nor radical leaders were there.

The first clash took place in Lexington. The British approached there early in the morning. Local militias - less than a hundred people - opposed six companies under the command of Major John Pitcairn. Last was naval officer, and poorly understood infantry tactics. But the recently assembled militia, who did not have time for joint training, absolutely “unplayed,” understood it even worse. In addition, they were five times inferior.

And yet, the militias lined up and waited for the approaching British. Everyone understood how unequal both the strength and the training were. The war has not yet begun, and it has not yet been drawn to shoot its own British colonists. So Pitcairn shouted to the militias to drop their guns and fail. They completed the second part, but completely ignored the first.

Pitcairn did not appreciate this interpretation and repeated the demand. And then someone - both sides ascribe this to each other - shot. After which the British fired two volleys. The militia responded absently and ineptly. As a result of the first skirmish, 8 militia were killed. The British escaped with one slight wound. 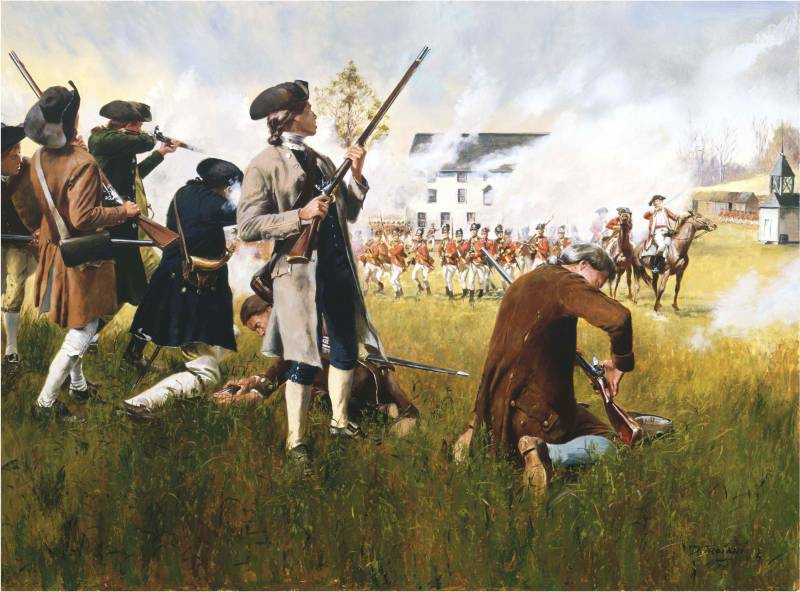 Hassle under Lexington. In red uniforms, of course, the British
But that was only the beginning for them.

Lexington militia fled, and the British continued on to Concord. The avant-garde freely entered the city and began to look for weapons. Finding nothing, the British in the process of searching managed to turn over some lamp and set off a fire.

Until this moment, around 400 militia gathered around Concord. They knew that the weapons depots were taken out of the city, and saw no reason to rush into battle. But when the fire started, the colonists decided that the British were going to set fire to Concord.

The militia, trying to keep the line, went ahead. Soon they stumbled upon a hundred British light infantrymen, who did not have time to fully deploy to fire. And the outcome of this skirmish was left to the colonists.

Smooth-bore muskets could not gather a plentiful harvest. Therefore, the losses of the parties were modest - the British killed 2, and the Americans 3 people. After which the British completely lost their ranks and retreated disorganized under enemy fire. If regular European units were in the place of the Americans, the matter would end with a bayonet and a complete defeat, but the colonists still did not know how. Therefore, trying to pursue, they finally broke their system, allowing the enemy to retreat to the main forces.

The raid commander, Colonel Francis Smith, was in a difficult position. He did not achieve any intelligible results, but at the same time, it seems, he finally turned the civil confrontation into a full-fledged war. And now it was still necessary to return to Boston intact.

This was not so easy to do - by this time several thousand militiamen had gathered in the Lexington and Concord area. And every minute new ones arrived. Inexperienced and "unplayed" Americans could not attack the British correctly - all together and holding the ranks within the units. Instead, they individually and in small groups attacked a convoy from the flanks, firing at the enemy from behind stones, fences, and trees.

The British, of course, organized counterattacks from time to time. Once this led to losses within these most fragmented groups, and once the colonists simply retreated to return again after 15 minutes. Be that as it may, this did not change the essence. 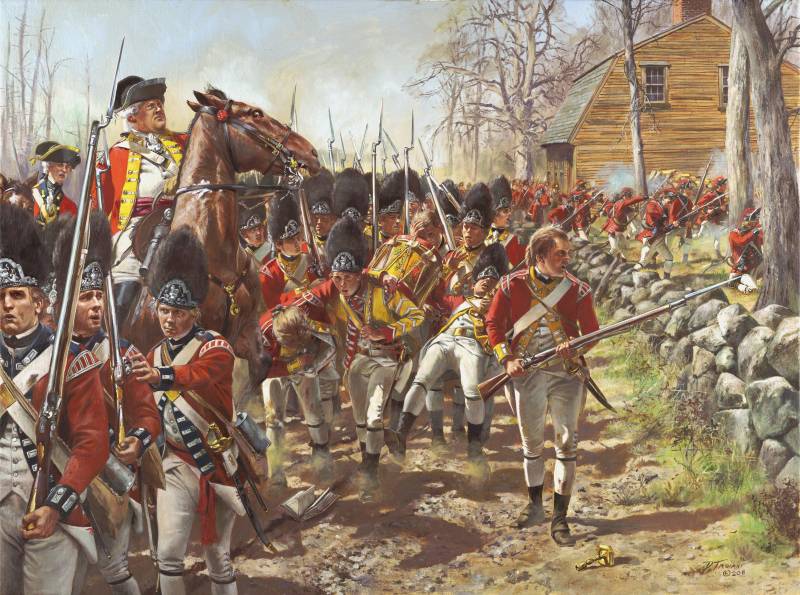 The British retreat under fire
Continuously fired, the British somehow reached Lekstington. There they met - to their immense happiness - a thousand bayonets reinforcements. For a while, the British were left alone, and they were able to move to Boston. But then they were piled on from two sides - both fresh militia forces in the front, and the colonists from Concord pursuing from behind.

A rather hot fight happened - it even came to hand-to-hand combat. But in the end, the British fought back and were able to continue moving. As a result, they broke away from the enemy.

The result was disappointing for the British. Objectives not achieved. Irreversible losses - 124 people (among militias - 54). But, worst of all, an open military confrontation began. And the enemy - some militias from farmers and merchants - was not routed completely. He also won on points.

Militias acquired the most expensive thing for themselves - the understanding that they could beat the British. Courage. And, as a result, the confidence that they have stepped on the right path. The global result of the skirmishes at Lextington and Concord was the transition of the confrontation between London and 13 colonies to a new level.

And in this sense, everything was just beginning.

We are in Yandex Zen
Chernobyl notebook. Part of 3
The hunt for the Blackbird
128 comments
Information
Dear reader, to leave comments on the publication, you must to register.