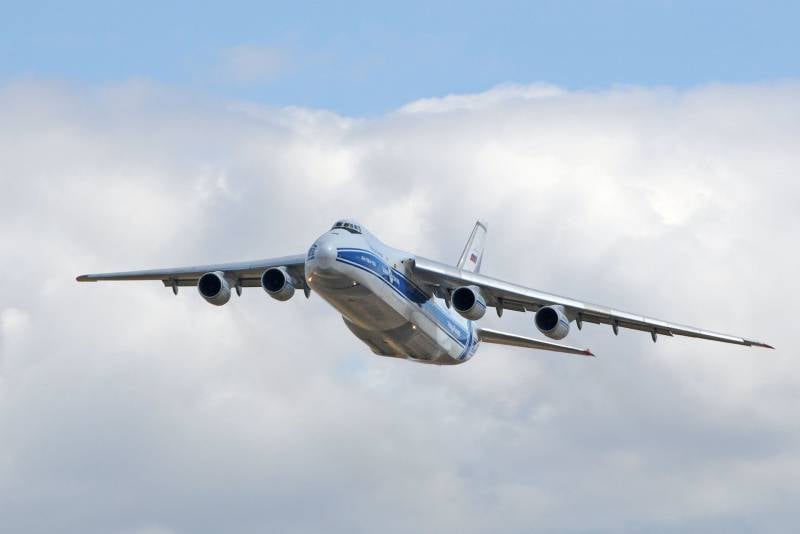 Superheavy domestic transport aircraft An-124 Ruslan is planned to be modernized once again. According to the Interfax agency, more than a billion rubles will be needed only to develop a new technical project for the modernization of aircraft. A deeply modernized version of the legendary military transport aircraft will receive Russian-made equipment. The modernization project will affect both the replacement of on-board electronic equipment, as well as general aircraft systems.

An-124 Ruslan, created in the USSR by Antonov Design Bureau specialists, is still a unique aircraft and the most load-carrying among all production models of similar equipment. The first flight of a super-heavy transport aircraft took place on December 24, 1982. The aircraft was mass-produced between 1985 and 2004. During this time, 55 Ruslanov were released. Of these, 36 were collected in Ulyanovsk on the basis of the Aviastar-SP large aviation enterprise. It has been in Ulyanovsk since 2004 that the modernization and repair of the Russian Ruslan has been carried out.

Especially for the armed forces, a modification of the An-124-100 aircraft for the BTA was created at the enterprise in Ulyanovsk. It is these vehicles that are in service with the military transport aviation Russia, it is planned to modernize in the near future. According to The Military Balance 2019 annual bulletin, the Russian military transport aviation is armed with 9 An-124-100 Ruslan aircraft. Also, the operators of Ruslan aircraft in Russia are the 224th Flight Detachment (a subsidiary of the Ministry of Defense, specializing in irregular commercial cargo transportation), there are at least 8 Ruslanov in the company's fleet, as well as the Volga-Dnepr cargo airline, whose fleet has 12 An-124-100 Ruslan aircraft capable of transporting bulky cargo weighing up to 120 tons. 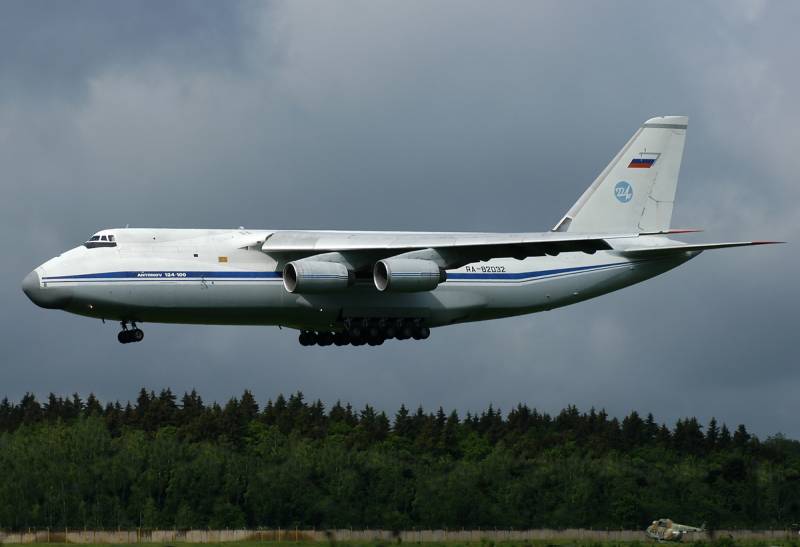 What will be replaced in the An-124 Ruslan aircraft

After the upgrade, the flight performance of the updated An-124 Ruslan heavy transport aircraft will remain the same. This means that the altitude and maximum flight speed, as well as a set of geometric characteristics will not change. The main objectives of the modernization of the aircraft: the transition to equipment and components of Russian production, a significant extension of the airworthiness of the machines, as well as improving flight safety and protection from possible attacks from the ground.

It is planned that during the modernization, the service life of the An-124-100M aircraft will be increased to 50-60 years. At the same time, a special program will be created to maintain the airworthiness of aircraft that have served for more than 45 years. Initially, the life of the An-124 aircraft was 24 thousand hours of flight or 25 years of operation. And if the planes are not approaching the first indicator, then a quarter of a century has already exchanged almost all Ruslans, the construction of the vast majority of which was completed before 1995. After 1995, only three An-124 aircraft were completed in Ulyanovsk.

As part of the modernization, An-124-100M military transport aircraft will receive modern avionics (BREO). The airborne communications system, the sighting and navigation flight system, and the airborne information system will be updated. It will affect the modernization of military aircraft and airborne transport equipment, lighting, oxygen and household equipment, the entire power supply system. The workplaces of the transport aircraft crew will also be replaced. Ultimately, with the upgraded version of Ruslan, it is planned to completely replace all obsolete, non-manufactured and imported equipment. 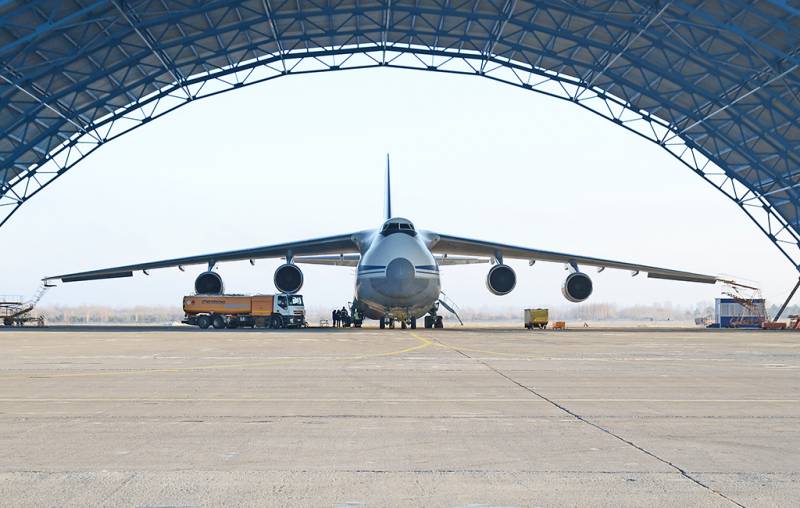 Photo: UAC
A distinctive feature of the An-2020 aircraft being modernized in the 124s will be the presence on board of a special defense complex, the main purpose of which is to protect the transporter from defeating MANPADS from the ground with radar and optical-electronic homing anti-aircraft missiles. The terms of reference state that the airborne self-defense system installed on board the Ruslan should automatically protect the aircraft from defeat in one attack with a probability of at least 90 percent of the following man-portable air defense systems distributed around the world: Stinger, Needle, Mistral.

Also in the technical task, some of the features of which were in the public domain and were published in the Russian media, it says that the modernized An-124-100M aircraft should become less noticeable to the enemy radar. In particular, it is planned to carry out work to reduce the radar, laser, acoustic, optical and radio visibility of military transport aircraft.

After modernization, the Ruslans will finally become Russian planes in every sense of the word. Finally, it is planned to put into practice what was said throughout the 2010s, especially actively after 2014 - the An-124 aircraft will receive exclusively Russian equipment and assemblies. True, one “but” still remains. The upgraded version of the transporter will retain the Ukrainian D-18T engines. 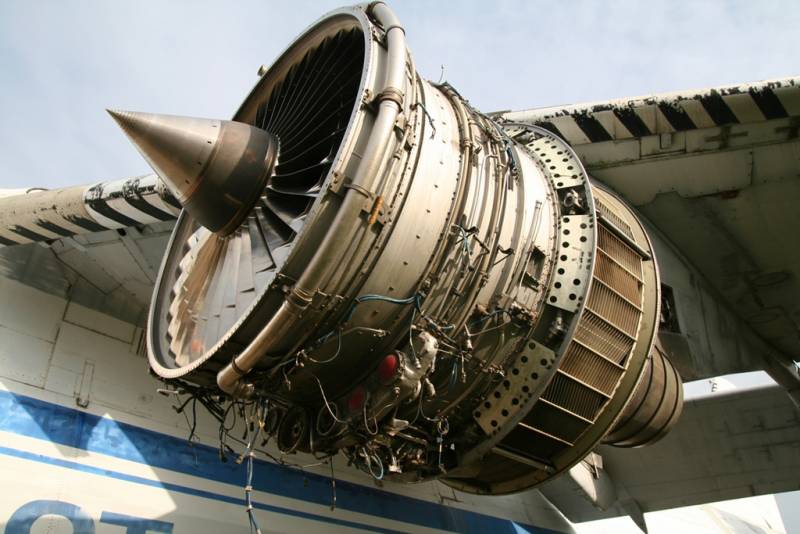 Photo: Igor Bubin
D-18T engine
In total, during the deep modernization of the aircraft, which, according to Denis Manturov, will make it possible to consider the aircraft Russian, it is planned to completely replace 29 units of Ukrainian production and three production systems of NATO and EU countries. The issue of import substitution in the development of experimental design documentation for a modernized aircraft is specifically addressed in the terms of reference.

In this case, the engine is more or less clear. Developed back in the 1980s at the Zaporizhzhya engineering design bureau Progress, the D-18T turbojet dual-circuit engine was specially created for the super-heavy aircraft An-124 Ruslan and An-225 Mriya. In Russia, this engine at this point in time simply has no analogues, as previously mentioned by the Director General of the Central Institute of Aviation Motors named after P.I. Baranova Mikhail Gordin.

In this regard, the numerous statements of Russian officials who have been discussing for a long time the possibility of resuming the serial production of the An-124 Ruslan aircraft in Russia appear to be ordinary populism in the current political situation. There would be nothing to install on new aircraft, since the available fleet of Soviet-made D-18T engines is seriously limited. 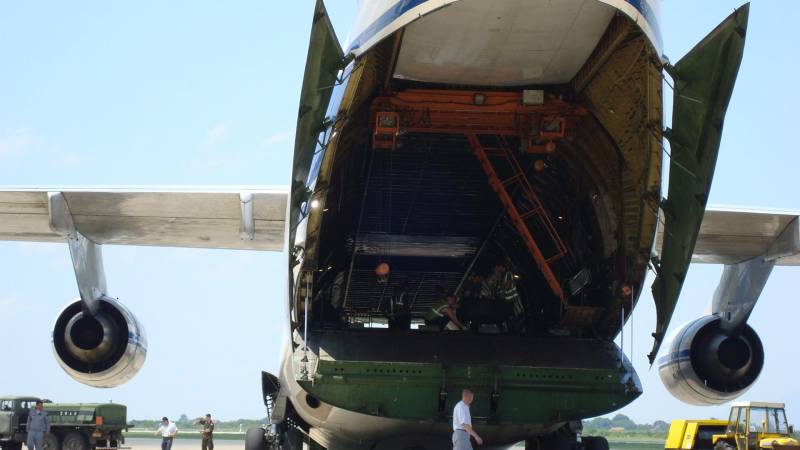 Photo: wikimedia
In the absence of new engines and the termination of cooperation with the Ukrainian company Motor Sich, Russia was able to establish repair and maintenance of D-18T turbojet engines with take-off thrust of 23 kgf. The fact that in Russia it was possible to establish a full-fledged repair of these engines, it became known in July 430. In an interview with Interfax, Deputy Prime Minister Yuri Borisov, who oversees the country's military-industrial complex, said that the first repaired D-2019T engines had already been received. In the future, it is planned to repair 18 of these engines a year, which will allow us to upgrade or extend the flight life of three aircraft. According to Borisov, such a repair rate is enough to increase the serviceability of the entire fleet of aircraft.

In the distant future, Russia will create its own aircraft engine of high thrust. This project is known under the designation PD-35. This new Russian dual-circuit turbojet engine is designed for installation on promising military transport aircraft, as well as wide-body civil airliners, including the Russian-Chinese passenger plane CR929. In its capabilities, the PD-35 should significantly surpass the Soviet D-18T engine. The new engine, which Mikhail Gordin refers to the sixth generation models, will have a thrust of about 35 kgf. True, at present the project is still at the stage of research work. The first demonstrator is planned to be presented only in 000, and the full completion of engine development is planned for 2023.

Design work on the modernization of the world's largest cargo serial transport aircraft will cost the Russian budget in excess of a billion rubles. According to the information contained in the SPARK-marketing system, during 2019 Ilyushin managed to conclude 15 contracts for the implementation of the bulk of development work on the creation of a modernized version of the An-124-100M aircraft for the needs of Russian military transport aviation . It is expected that the design, scientific and technical groundwork created in the framework of these works will be used in the future and in the creation in Russia of a promising aviation complex for military transport aviation (PAK BTA).

The total cost of design documentation to create a modernized version of the military transporter and its units exceeds one billion rubles, while the lion's share of the allocated funds will go to the EMZ company, the Myasishchev experimental engineering plant (EMZ). It was with this enterprise that Ilyushin entered into a contract for about 830 million rubles. The contract involves the creation of a technical project for the An-124-100M aircraft, the expected completion date is the end of this year.

Preliminary figures are also known for the cost of re-equipping existing An-124-100 military transport aircraft with the An-124-100M modification. Back in mid-2019, it was reported that the Ilyushin Aviation Complex expects to modernize the first An-124 Ruslan aircraft by 2022. Work will be carried out in Ulyanovsk at the facilities of Aviastar-SP. Earlier it was reported that the conversion of one aircraft to the An-124-100M variant, as well as conducting its comprehensive tests, would cost the Russian budget 3,5 billion rubles. Thus, we can roughly imagine that the modernization of all 9 An-124-100 aircraft of the Russian military transport aviation will cost more than 30 billion rubles, and if in the future the modernization of the aircraft used by the 224th Flight Detachment is carried out, then the cost of the project will more than double.

We are in Yandex Zen
An-12 in Afghanistan
Today and tomorrow "Ruslanov"
51 comment
Information
Dear reader, to leave comments on the publication, you must to register.