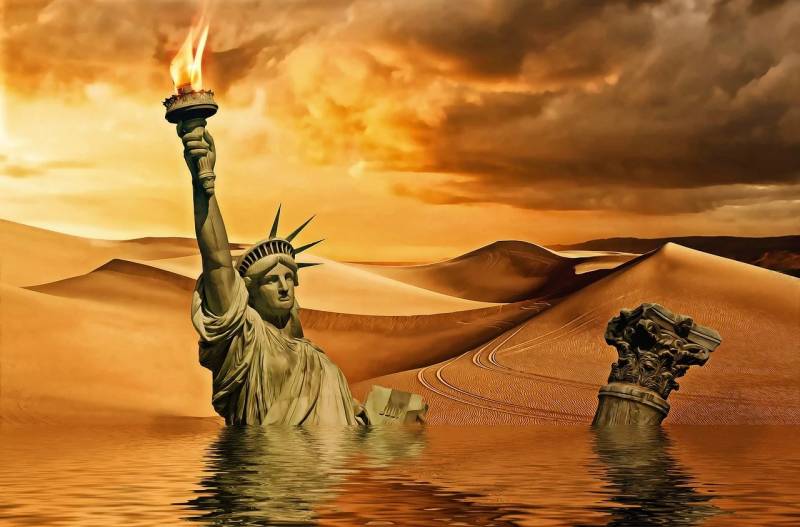 While we are excitedly discussing Putin’s reform of January 15, America has launched an impeachment process for US President Donald Trump. According to our Americanists, Republicans, supporters of Donald Trump, can take up weapon... The American deep empire with all its "democracy" is in danger!

How do empires die

The first sign of an empire’s catastrophe is unbridled morals. In America, they guessed to legalize it by endowing LGBT people with “human rights”. That was due to the lack of historical experience, the infancy of the American empire ...

The Russian Empire died in popular opinion when the "collective Rasputin" arrived. The imperial elite could not tear it away, in the end its representatives killed Grigory Rasputin at the very end of 1916. But it was too late ...

A “collective transgender” came to the USA and received “human rights”, became the first person in America. They are represented in the Democratic Party by ex-vice president and presidential candidate Joe Biden. Under Obama, as vice president, Biden from his high post publicly threatened all countries in the world in which they would not respect the rights of LGBT people. All the rest are as if possible, but LGBT - in no case.

For a still normal America, President Trump is the last light in the window, with all its gadgets, narcissism and arrogance. Otherwise, transgender advocate Joe Biden or his deputies in the Democratic Party will come. America is too late to take medicine, because the "American Rasputin" has already arrived, and it is even legalized. Only surgical treatment.

Democracy, as an ideological system, cannot resist the arrival of unbridled passions into society; on the contrary, it condones and promotes this. After all, perverts of various kinds are also from the people, and in the upper strata of society under democracy they gradually find themselves in the majority. Law of nature?

A people happens to be great, and sometimes it is small, it happens, and it turns into hoax, ruled by villains and passions, the ancient Platonists and Aristotles warn of the dangers of democracy. Today, expert Evgeny Satanovsky speaks of the democratic power of villains over a crowd of fools. Therefore, all supporters of the human norm involuntarily take the side of the gods and political autocracy, of greater imperialism. Today it is Trump - in America and Putin - in Russia. In this sense, Democrats in the United States declare Trump "Putin's agent."

The killing of Suleimani

In this American struggle against impeachment in Baghdad, on the orders of Trump, the Iranian General Suleymani, who arrived in Iraq on a state visit, is killed. Although the murder was committed in Baghdad, this is the first shot in a political war in America.

The resolution of a political war in the USA can only be the victory of one of the parties, and in an obvious way - by force. With the complete political defeat of their opponents. No “victory” of one of the parties with a preponderance of votes in the presidential election will suit any losing side: it will not recognize it. All parties to the conflict in such cases are planning a “small military coup”, like the Decembrists in Russia in 1825, but then, as a matter of fact, they will order it ...

The Democratic Party's impeachment of President Trump in the lower house of Congress is an unlawful attempt to remove Trump from power. Earlier, Democrats falsified Trump's accusations of "conspiracy with Putin." The LGBT Democratic Party knows no measure, no law, and no taboos. What can be the restrictions for passions? They are, by definition, infinite.

And President Trump also goes to lawlessness, orders the assassination of Suleimani in distant Baghdad, but this is a demonstration of the strength and determination of his opponents in America. Suleimani was the first victim of a political war in the United States.

What do we care about America?

The political storm in the United States will affect the whole world and Russia, it is already affecting, because LGBT people are shaking their rights in Russia too, and we, embarrassedly smiling, already recognize their “rights”. Fortunately, they are still far from their legalization, both in the USA and in Europe, for which American and European Sodomites poison us with “Asian” and “uncivilized”. So, through the old "Sodom sin," the question of God again arises before us.

Fyodor Mikhailovich Dostoevsky once said: if they prove to me that there is no Christ and never was, I will still believe in Him. Because otherwise - an inevitable catastrophe, that is, all the same, Satan will come to the world in the form of a catastrophe and by his arrival he will prove the existence of a God who is definitely not.

This proof was presented to us in the 20th century by the party of the RSDLP (b), the heiress of the great European ideas of the Enlightenment in the interpretation of Karl Marx, with a moral foundation in the form of “militant atheism”. In the 1934s, under the cover of Leon Trotsky and under the leadership of the European Freudian psychoanalysts, Russia also plunged headlong into the sexual revolution with all the LGBT orgies, from which Stalin pulled it out. And in 1937 he adopted the famous law on "sodomy", which became one of the moral pillars of our future Victory. Our historians are still silent about this shameful page of our revolution, although it is very relevant: this is one of the reasons for the XNUMX repressions against the Trotskyists.

The Bolsheviks in Russia went through their entire circle of hell: from the destruction of churches through the repression of their comrades (“faithful Leninists”) to the chairman of the Communist Party of the Russian Federation Gennady Zyuganov, who now puts candles in the church. And if there is Satan with his "Sodom sin," then there is God, according to F.M. Dostoevsky.

Now America has to go through its circle of hell because its foundation is rotten to the rights of an LGBT person.

We are in Yandex Zen
Testament of Valentin Rasputin
On the other side of the "red" and "white." Report Izborsk club
185 comments
Information
Dear reader, to leave comments on the publication, you must to register.