From ship to shore. New modification of the NSM rocket for the US Navy and the ILC 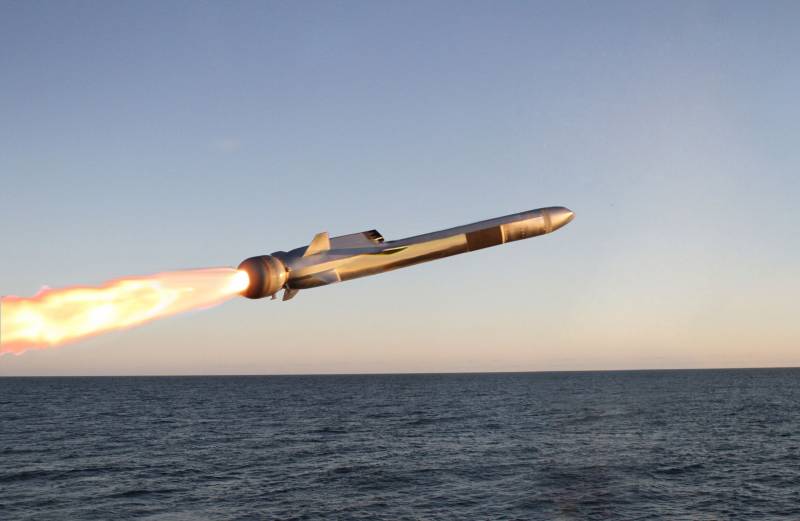 NSM Rocket In Flight
One of the latest strike weapons of the US Navy is the Norwegian-developed Naval Strike Missile anti-ship missile. Now the fleet is deploying and developing this weapons on some ships, and in parallel is making new plans. It became known that the Navy and ILC would like to get an onshore missile system using NSM missiles.

The United States hosted another National Navy Surface Association symposium last week, during which officials made a number of important statements. Among other things, it was alleged that the naval forces and the Marine Corps are considering the possibility of creating and purchasing a new coastal missile complex based on the existing anti-ship missiles.

The basis of the complex should be the NSM anti-ship missile developed by the Norwegian company Kongsberg Defense & Aerospace. This product has been adopted by the U.S. Navy and is manufactured at the Raytheon factory. The missile in the basic version with ship-based showed high performance, and now the option of its transfer to the land platform is being considered.

The onshore version of NSM is still at the stage of exploring opportunities and prospects; real design work has not yet started. Nevertheless, the current stage of work will not be too long, and a final decision can be made in the near future. If the Navy and the ILC really want new weapons and order them, the development will be able to start within the next few months.

The basis of a promising coastal complex should be a Norwegian-designed NSM missile, put into series in 2007. Initially, it was designed to arm modern ships of various types. In 2013, the coastal complex based on NSM entered service with Poland. Development in progress aviation NSM versions under the designation JSM. 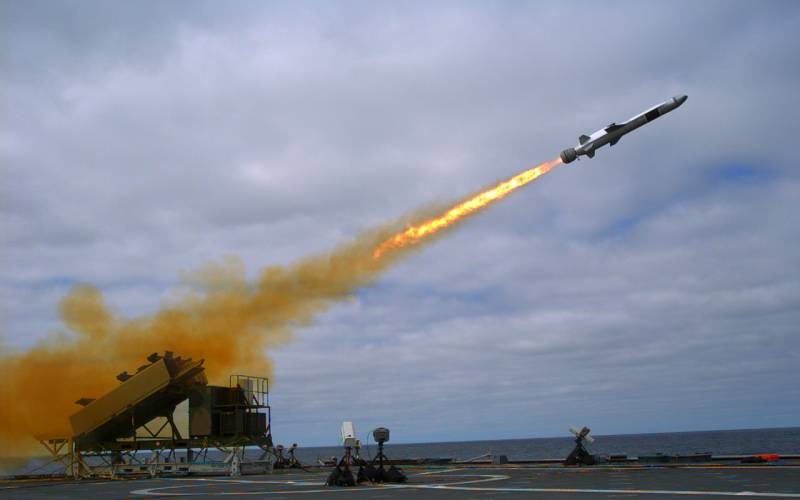 Photo: US Navy
First NSM launch from USS Coronado (LCS-4), 2014
Norwegian-American cooperation on the NSM project began in 2014. In the middle of the year, the announcement of early missile tests on an American ship appeared, and in September the first launches took place. The tests took several years, and to date, work has begun on the full-scale introduction of new weapons.

RCC type NSM are installed on the littoral ships LCS of two projects. According to current plans, by 2023, such weapons will receive most of the existing and under construction LCS. The presence of these missiles should significantly increase the shock potential of launch vehicles.

Now the U.S. Navy plans to deploy NSM missiles not only on ships, but also on coastal complexes. The ILC has the same plans. However, technical details, approximate terms and other features of a promising project remain unknown.

The NSM anti-ship missile was developed by Kongsberg Defense & Aerospace as a promising high-performance weapon capable of showing advantages over other systems of its class. The result was the appearance of medium-sized anti-ship missiles (length less than 4 m, weight - 410 kg) with modern guidance and 125-kg warhead. 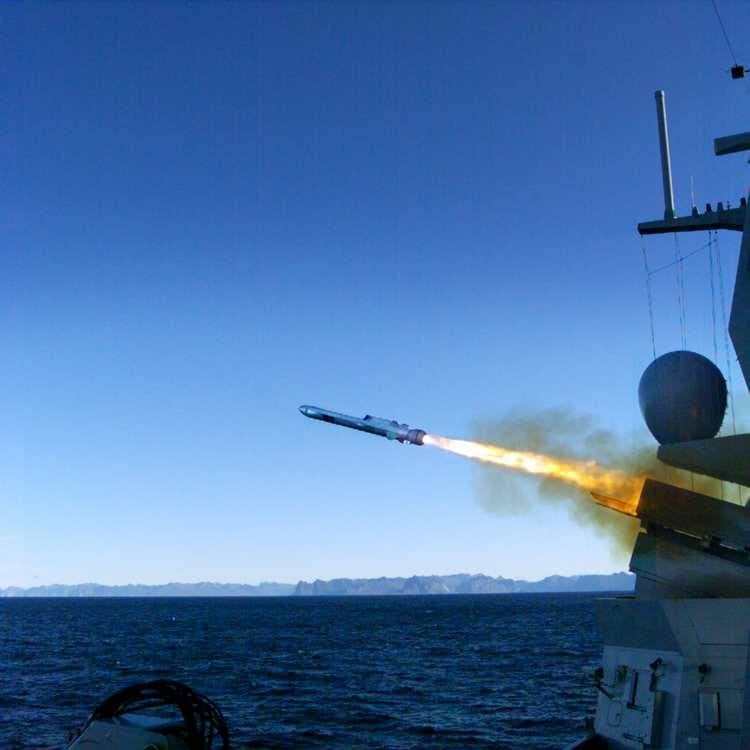 Photo: Raytheon / Kongsberg
Start of a rocket
Glider RCC NSM is made mainly of their composite materials, and also has special contours, which reduces visibility for the radar. The power plant includes a solid fuel starting engine and a marching turbojet engine Microturbo TRI 40. Due to such devices, a flight with high subsonic speed for a range of at least 185 km is provided, depending on the profile.

The NSM project provides for the use of combined guidance tools that are protected from opposition by enemy means. The flight to the target area is carried out using satellite and inertial navigation, as well as a surface tracking system. Search for targets using infrared seeker type IIR. Different flight profiles are provided to ensure effective destruction of different targets. The manufacturer claims the possibility of attacks by surface ships and ground targets.

In the case of RCC ships, the NSM is used with its own launcher. This device is mounted on a carrier deck and can hold from one to six missiles. Depending on the configuration and the number of launch cells, the equipment of the missile system can weigh up to 10-12 tons.

Kongsberg offers several NSM-based anti-ship missiles, including land. The coastal complex includes a command post, a surveillance radar and self-propelled launchers with four missiles on each. All the facilities of the complex are carried out on automobile chassis and interact using wired or radio communications. A similar system has already been adopted by Poland. 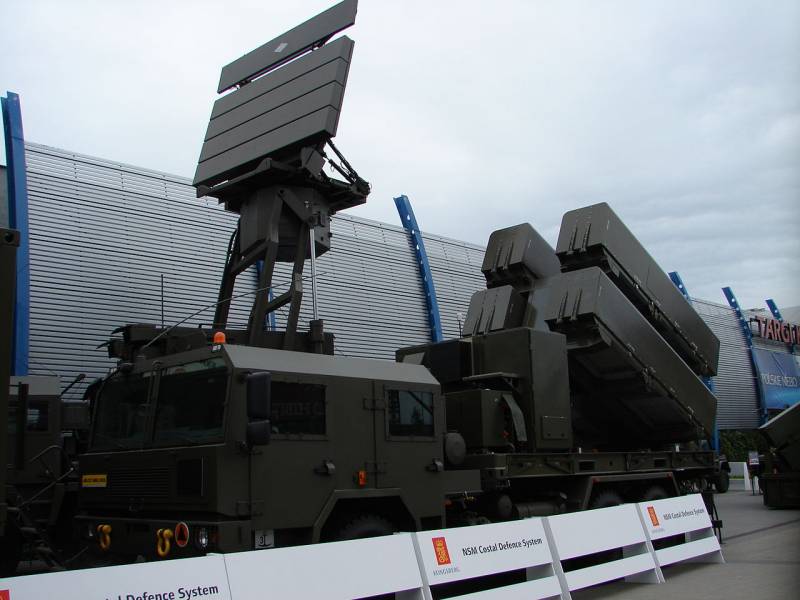 Фото: Wikimedia Commons
Coastal complex with NSM from the Armed Forces of Poland.
What kind of missile system the US Navy and Marine Corps want to get is unknown. It can be assumed that it will be built according to already known schemes proposed by the Norwegian developer. At the same time, certain changes are possible in accordance with the wishes of the customer. However, the overall composition of the funds should remain the same.

The foreign press is now separately discussing the possible appearance of the coastal complex for the ILC. An assumption is made about the possible adaptation of the HIMARS MLRS launcher to new missiles. The Marines have already experienced such combat vehicles in different conditions, including on the deck of the ship and received remarkable results. Whether it comes to such a unification is unknown.

Interest in the coastal missile complex is associated with new threats and challenges. The main geopolitical rivals of the United States are developing their naval forces, and are now able to pose a threat to coastal areas. To protect its maritime borders and land facilities, the United States needs new ground-based weapons, which it is proposed to use the NSM missile.

Mobile coastal complexes can be deployed in hazardous areas in order to exclude enemy active activity in the coastal zone. With the help of NSM on land platforms, it will be possible to cover both the continental United States and overseas bases. Moreover, in the light of current challenges, the protection of remote databases has the highest priority. 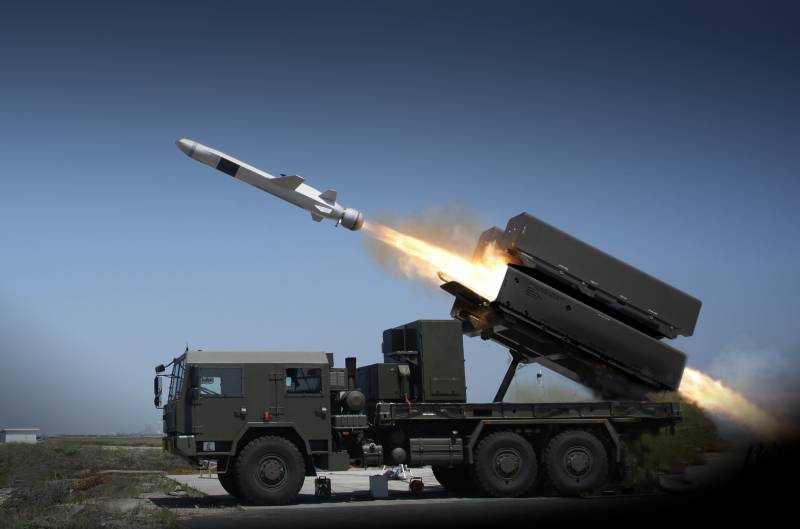 Photo: Raytheon / Kongsberg
Rocket launch onshore complex
The main element of the complex will be the NSM rocket, and such a choice is obvious. This RCC is the latest weapon of its class in the US Navy and compares favorably with its predecessors. Its transfer from ships to land platforms will more fully reveal the existing potential for defense.

In the evaluation process

However, while the coastal missile system based on NSM is virtually absent. The Navy and the ILC assess the prospects of such a hypothetical model, and only after completing these works can a real project start. It will take several years to carry out the necessary work, and a ready-made missile system can appear no earlier than the middle of the new decade.

At the same time, another scenario cannot be ruled out in which the ILC and the Navy will negatively assess the idea of ​​the coastal complex and refuse further work. In this case, the NSM’s anti-ship missiles will remain only two types of strike weapons.

However, a negative scenario seems unlikely. There are no coastal systems with anti-ship missiles in service with the Navy and the ILC, which can complicate coastal defense. The development of such systems will obviously change the situation and allow for more effective protection of maritime borders. With all the possible difficulties and costs, the creation of a coastal complex will have positive consequences for defense.

We are in Yandex Zen
Modular virus. The concept of modular ships does not work. Nowhere
About the future of underwater robotics
16 comments
Information
Dear reader, to leave comments on the publication, you must to register.