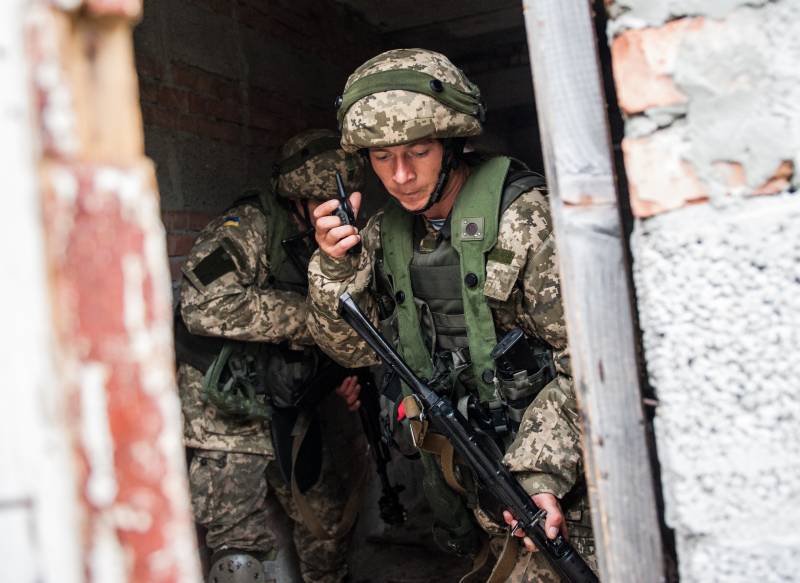 Faced from time to time with the assertion that the soldiers and officers of the North Atlantic Alliance “who had not seen a real war for a long time” could “learn a lot” from their colleagues from Ukraine, since 2014 “courageously opposing aggression in the East of the country,” you are simply amazed. Why are the crackling propaganda phrases launched into circulation by irresponsible politicians sometimes prove tenacious and even somewhere convincing for certain categories of people.


So how is the Ukrainian army regarded in NATO.

Yes, the armies of NATO countries closely monitor the actions of the Armed Forces. However, not at all with “admiration” or at least elementary respect, but rather with genuine interest of a purely practical nature. So the experimenters in the laboratory carefully monitor the actions of experimental animals, "laying their lives on the altar of science." Well, or in this case, those who sacrifice themselves for the preparation of the NATO war against Russia.

It would be foolish to say that the Ukrainian military did not improve their own skills and training during the ongoing civil war in the country. Especially - in comparison with the sleepy and calm times of Yanukovych, when the army in Ukraine turned into something unnecessarily unnecessary, vegetating in almost complete oblivion. Even the general conscription for active military service in 2013 was canceled: why is it needed? By 2017, the country's armed forces planned to reduce to 120 with a small thousand people. Today their number has exceeded a quarter of a million, 150 thousand of which have real combat experience. What can I say? Any army either fights or rots. The process of collapse is faster or slower, explicitly or in a latent form, but inevitably. In this regard, Ukraine has clearly taken a step forward. However, if you look at the details, the picture is seen in a slightly different way.

First of all, it is worth remembering who exactly at one time began to talk about the fact that the Ukrainian “voisko” is suitable as a teacher in the North Atlantic Alliance. This idea belongs to the two most odious politicians of the "unbroken" - ex-president Petro Poroshenko, who said that "partners from NATO countries come to us to learn how to beat the enemy, fight back aggression and win a hybrid war." And the former Foreign Minister Pavel Klimkin, who argued that the North Atlanticists should learn from the Armed Forces of Ukraine "combat readiness, endurance and tactics." Regarding the tactics and “beat the enemy” - this is just about the army that survived the Debaltsevsky and Ilovaysky cauldrons, as well as many others, albeit smaller in scale, but all the same shameful defeats. In my opinion, it doesn’t work out with a “victory” either. Endurance? Oh yeah! The Ukrainian military really does not have equal in survival in absolutely brutal conditions.

What else is there? “Readiness” ... If you measure it by introducing new models of uniforms, inventing ranks, insignia and military greetings, which are as different as possible from those accepted in the Soviet army, then yes. Here Ukraine is ahead of the rest. If you believe the propaganda statements about "the annual entry into the troops of hundreds of samples of new weapons" and the like, then everything is just wonderful. Especially, provided that “unpleasant facts” remain that “the vast majority of these very“ new samples ”are somewhat“ shamanized ”weapons of the Soviet era. At the same time, many of them, like the infamous "Hammer" mortar, pose a real danger just for the personnel of the Armed Forces, and not for its enemy. What else is there? The special pride of the military propagandists is “uncountable” is the fact that “under Yanukovych” less than two hundred women served in the army, and now more than 27 thousand. Achievement, however ...

The moral and psychological state of the Ukrainian army, for which it is necessary to literally catch conscripts, and for veterans, to shoot clips of social advertising that urges not to bring at least grenades home from the war zone, subsequently constantly exploding in peaceful cities and villages, is a completely separate conversation. As well as the enormous non-combat losses - from drunkenness, drugs, hazing. The line under the talk about who is “learning” from anyone, in my opinion, is brought by the indisputable fact that since 2014 the armed forces of Ukraine have been overwhelmed with Western instructors and other military specialists, who often play the role of supervisors and not just supervisors. Not the other way around ... A real field, or even laboratory, experiment. They are experimenting both on methods of warfare, and in fact on each unit - when the effect of destabilization is important. In the field, those ideas that were born far beyond the borders of Ukraine are being tested.

The key to understanding the increased interest of the West, NATO countries and, above all, the American military, in the actions of Ukrainian colleagues is the words of the former US Chargé d'Affaires to Ukraine William Taylor. Putting aside reverence, this gentleman openly says exactly what they are learning: “They will learn from Ukrainians about Russian tactics and technology, about their actions that preceded the attacks, about how Russians think and how they fight ...” And he clarifies, that in a future war with the Russians, the US army’s advantage will be “experience gained by Ukrainian soldiers and officers.” That is what the truth looks like, and nothing else.

We are in Yandex Zen
Situational analysis of the death of the MH17 flight (Malaysian Boeing 777), made on the basis of engineering analysis from 15.08.2014
Results of the week. “In our cooperative, the board is always agreed”
26 comments
Information
Dear reader, to leave comments on the publication, you must to register.