Each country has a Glock. Israeli pistol IWI Masada 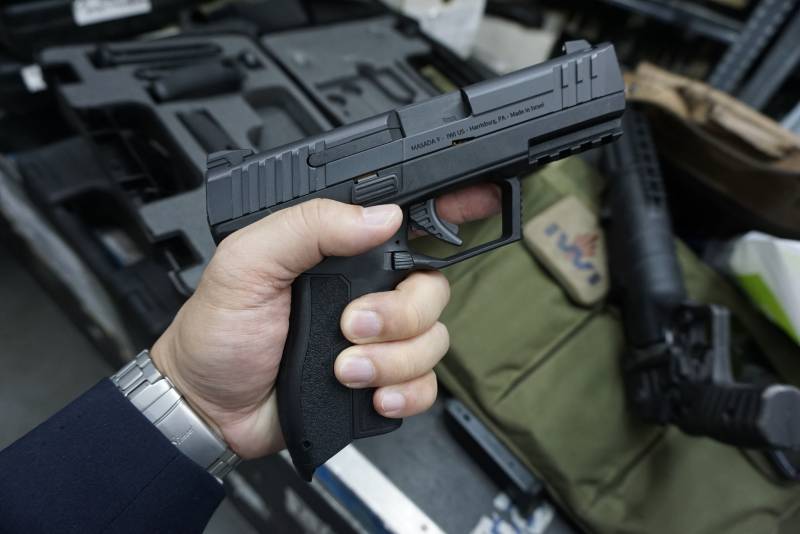 Today, many countries of the world have produced their own pistols based on the classic Glock. Glock 17 with a polymer frame was the first such pistol with an impact trigger. Later, many pistols around the world began to be compared precisely with the brainchild of designer Gaston Glock, simply for the reason that his pistol was the first. At the same time, Glock 17 is already legendary weapon, which is in service with the army and police in more than 30 countries and is well represented in the civilian market. It would be strange if other states did not try to bite off their portion of this weapon pie, offering their own versions of a pistol similar in technical characteristics to the market. Israel did not stand aside either, in which IWI introduced the compact 2017 mm IWI Masada pistol in 9.


Choosing a name for his new pistol, IWI continued its practice of borrowing historical and geographical names. "Masada" is the name of an ancient impregnable fortress, which was located on the southwest coast of the Dead Sea. The fortress was built during the reign of King Herod. For residents of Israel, this fortress is a symbol of heroism.

For the first time, an Israeli pistol, dubbed Masada, was presented at gun shows back in 2017. By 2020, the model is already well "mastered" in the international market. Israel Military Industries (IWI) competes with this model of short-barreled weapons not only with numerous Austrian Glocks, but also with Beretta, SIG-Sauer, Heckler & Koch and other well-known manufacturers, who introduced their own models of plastic strikers or hammer pistols on the market (Striker - drummer).

The Israelis themselves do not feel too modest when promoting their new pistol, which, in principle, is absolutely true. So the representative of IWI US, Inc. (American division of the arms company), calls the new pistol under the eternal cartridge 9x19 mm Parabellum "a serious competitor in the international market for state and civilian arms customers." According to representatives of the developer company, the new gun was created in accordance with all modern requirements of the military, and the technical characteristics of the Masada model were formed on the basis of feedback from the rifle community: processing feedback from military personnel, law enforcement officers, as well as shooting athletes . Involvement in the creation of small arms athletes involved in practical shooting, is becoming an increasingly common practice in the modern world.

True, not all experts share a similar approach to creating weapons. For example, the editorial board of the Kalashnikov magazine believes that the development of a pistol that takes into account the interests of such diverse consumers can lead to the creation of an average model that will be lost in the lineup of the same Glock strikers, which are very well adapted for solving various problems.

At the same time, the use of modern collimator sights can be an additional advantage of Israeli Masada pistols. The manufacturer claims support for the Trijicon RMR, Vortex Venom, Leupold Delta Point Pro and Sig Romeo1 sights. The success of the Masada pistol version with such “optics” can be facilitated by the reasonable price and the fact that the fashion for pistols with collimator sights has not yet passed. The cost of a gun for the American market at the moment is $ 480 (approximately 29 rubles at the current rate). 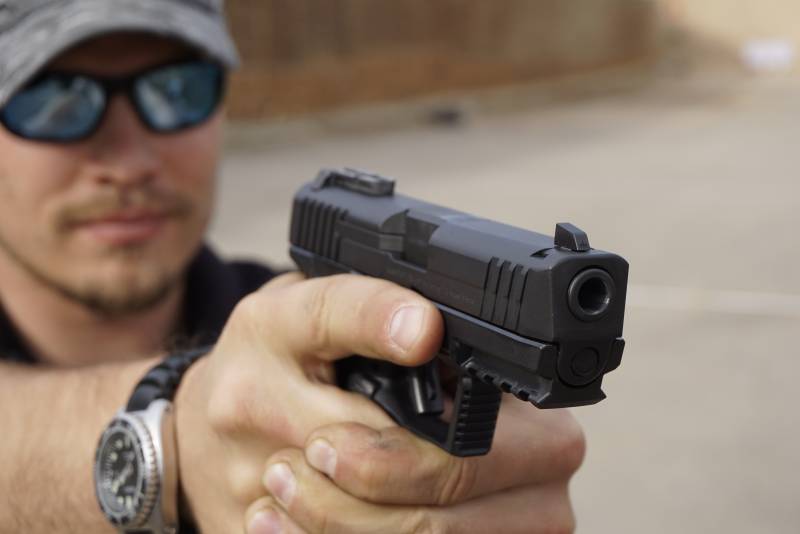 The IWI Masada pistol is a weapon chambered for a 9x19 mm Parabellum cartridge. The cartridge, created back in 1902 by Georg Luger (hence the second name “Luger”), is still manufactured and is widely used in a huge number of small arms around the world, feeling fine in the 17st century. The standard for the gun is a box magazine, designed for 10 rounds. A version with a 10-charge magazine is also available. XNUMX-charge versions of the store are designed primarily for the civilian firearms market. For example, in some US states there are restrictions on the number of rounds in a magazine.

The new Israeli gun is quite compact. The total length of the weapon is 188 mm, the barrel length is 104 mm. The barrel of the IWI Masada pistol is cold forged. The mass of the gun without a magazine is 650 grams. For comparison, the founder of the genre, the classic Glock 17 is equipped with a 114 mm barrel, the total length of the weapon is 204 mm, and the mass without a magazine is 625 grams. At the same time, the barrel of the new Israeli pistol is specially located very low. This solution reduces the toss of weapons during firing and allows faster and more efficient to conduct aimed fire. 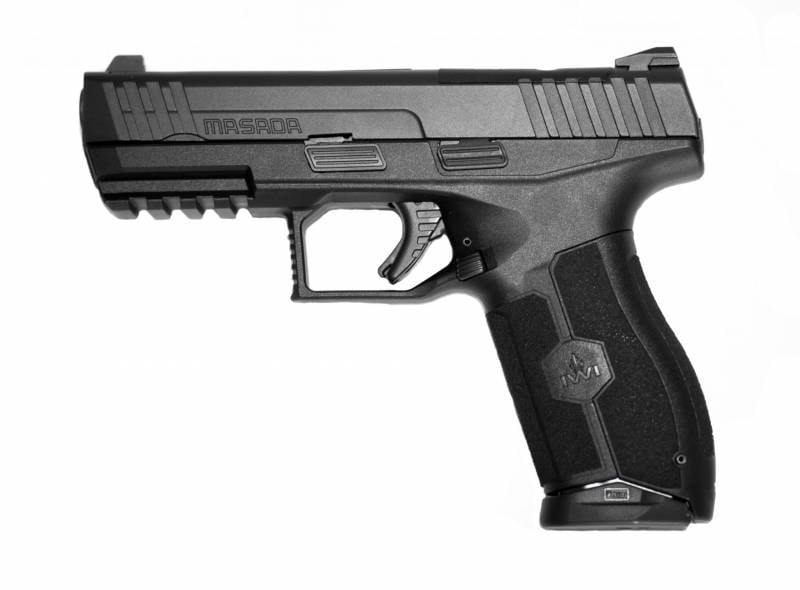 By the principle of operation, the new Israeli Masada pistol is no different from other modern compact self-loading pistols. It is based on automation with a short stroke of the barrel. At the same time, Masada, like the numerous followers of the Glock 17 model, is an impact pistol with a frame made of high-strength, impact-resistant reinforced polymer material, which reduces the weight of the model. A characteristic feature of such pistols is the absence of a trigger and a safety switch (manual fuse is available only as an option). The principle “snatched and shoot” is implemented in the pistol. One of the features of the model is an interchangeable trigger made of stainless steel. If necessary, this solution makes it easy to disassemble and maintain weapons, as well as change the mechanism itself.

The 9 mm IWI Masada pistol received an effective automatic fuse, which is integrated into the trigger to increase the safety of the shooter. The fuse is a key on the front of the trigger. The manufacturer claims an average downhill effort of 5,5 to 7 pounds (2,5 to 3,18 kg). The gun will never fire unless you pull the trigger. At the same time, the user’s safety is also enhanced during maintenance and cleaning of the weapon, since disassembling the gun does not require pressing the trigger.

Open sights are standard on the gun. The model received an open mechanical sight with a large front sight and the whole. Optionally, models of collimator sights of certified manufacturers can be installed on the gun. Also available as an option for shooters is the option with three tritium dots glowing in the dark, making it easier to aim and shoot from a pistol in low light. 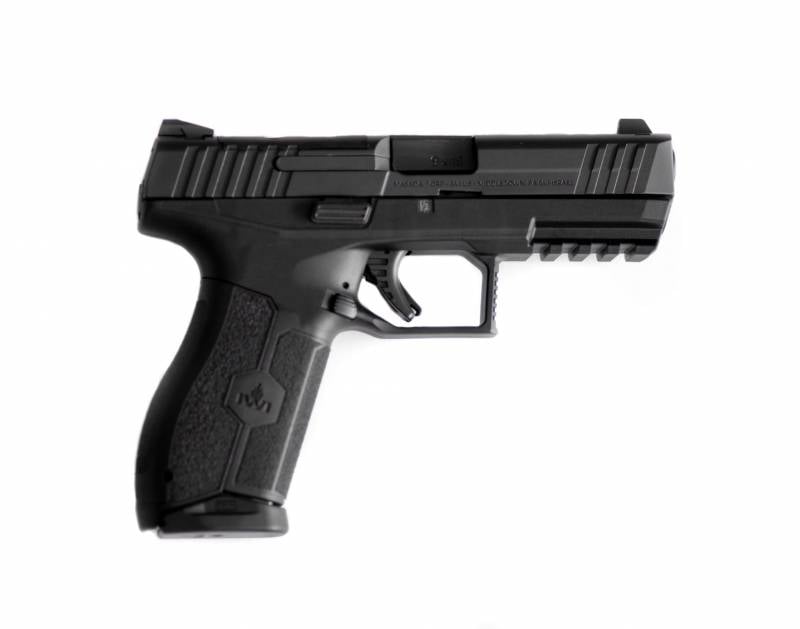 Advantages of the IWI Masada Pistol

Like almost all models of modern pistols, the new Israeli hammer pistol with a polymer frame is a model with good ergonomics and the ability to adapt to a specific shooter. For better retention of weapons on the pistol grip there is a finer corrugation. Especially for this model, the IWI gunsmiths provided three interchangeable pads on the handle sizes: S, M and L. The shape of the handle and the ability to change pads make it easy to adjust the weapon to any grip depending on the size of the hand. It is worth noting that this is a very important feature for the army pistol model, especially when you consider that a large number of women serve in the Israeli army.

In addition to improved ergonomics, the IWI Masada pistol is an ambidextrous weapon, both right-handed and left-handed can be used. The weapon is equally convenient for those and for others, since the gun controls are duplicated: the magazine latch button and the slide stop lever are double-sided.

Returning to the ergonomics of the model, it can be noted that the 9-mm Masada pistol received an increased trigger guard. Such a bracket allows the shooter to confidently use weapons even with gloves on. At the same time, enough space is left on the model to accommodate a standard Picatinni type underbarrel bar (integrated element), which can be used to place a tactical flashlight or laser target designator. 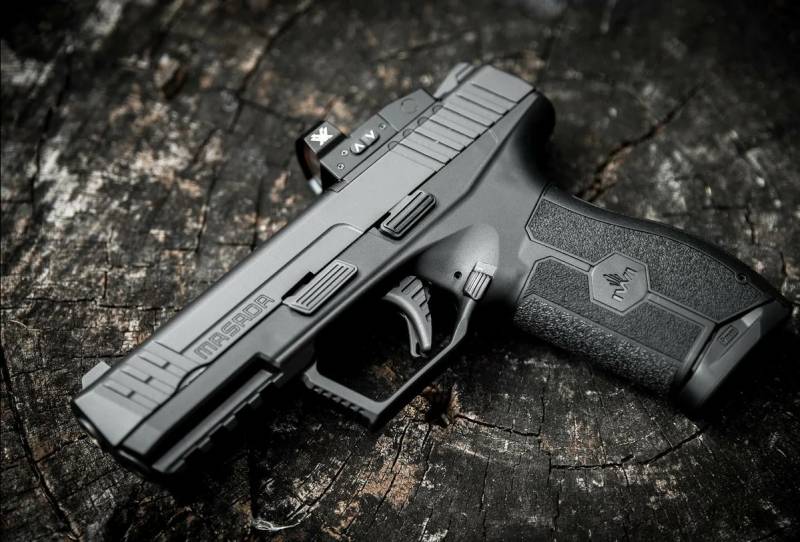 Another important small detail of the new Israeli pistol is the bottom of the store, which has recesses on each side. Such recesses allow the shooter to easily reach the store in difficult operating conditions. For example, when the store is dirty, bent or with slippery hands (gun grease, sweat).

For many models of modern pistols, all of the above is in the order of things. But at the same time, these are very important details that are designed to increase the competitiveness of the model in the market. Much today is tied precisely to the ergonomics and ease of use of weapons, because the basic technical solutions were invented decades ago. It is no coincidence that while promoting the Masada pistol, IWI focuses on ease of maintenance and safety in handling, as well as a high level of ergonomics and ease of use.

We are in Yandex Zen
Glock Ges.mbH
Pistol Glock 17 (Austria)
67 comments
Information
Dear reader, to leave comments on the publication, you must to register.