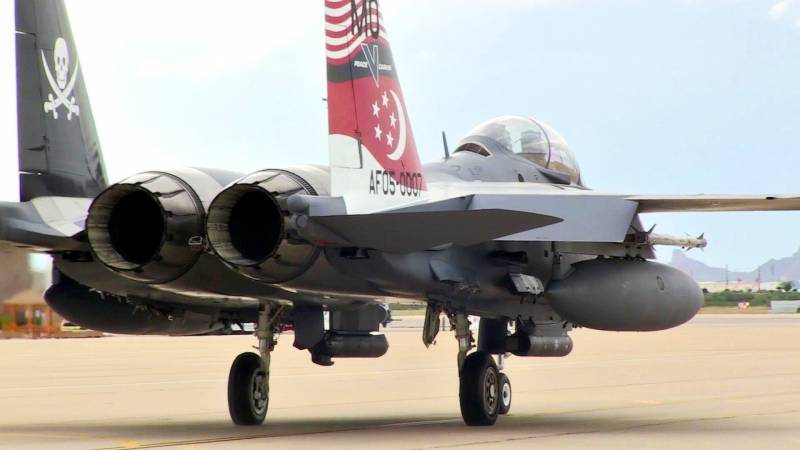 In early January 2020, Singapore received approval for the acquisition of a dozen F-35B aircraft in the United States, along with spare engines and parts, electronics, equipment, simulators and other necessary equipment. The value of the contract will be $ 2,75 billion.

In general, quite a walk-through news, at first glance, especially since the Singaporean representatives did not place a particular emphasis on this. Singapore Minister of Defense Ng Eng Hyun emphasized that the latest aircraft are designed to gradually replace F-16 C / D fighters, of which there are currently 60 units in the Singapore Air Force.

It seems to be a bit of these aircraft. 12 units - this is half of the Singapore Air Force squadron in quantity; probably, aircraft of this type will be consolidated into a separate squadron. But still there is something in this news. Singapore is little threatened to take and arm like this.

Singapore is a small but well-armed island

Singapore is already well armed, not bad for such a small island nation. The army has 72 thousand people. The Singapore Air Force is 319 aircraft and helicopters of various types and 14,8 thousand personnel located at four major air bases. The basis of Singapore's striking power aviation now make up 40 F-15SG and 60 F-16 C / D. 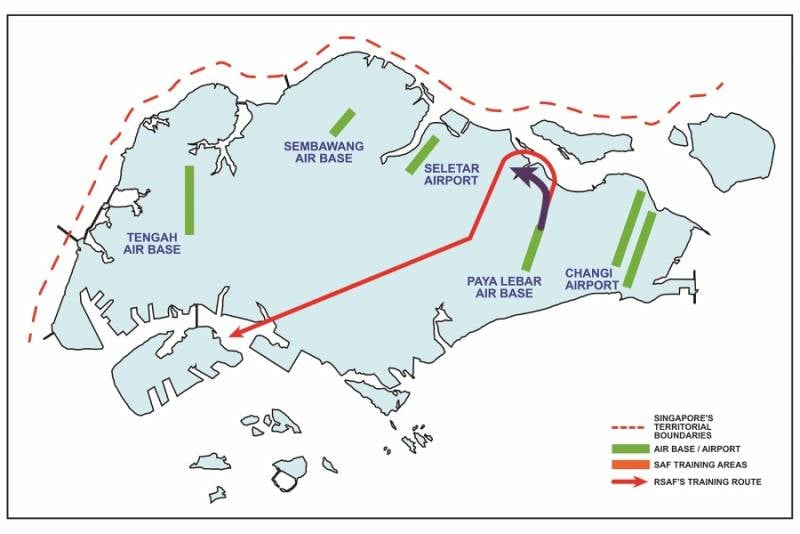 Map of Singapore Airbases
There is another factor that seriously increases Singapore's military potential. He is in close allied relations with the United States and its allies. Singapore, in particular, is part of the Five Power Defense Arrangement military agreement with Great Britain, Australia, New Zealand and Malaysia. Singapore provides US support in the region. American planes can visit the Paya Lebar airbase, and warships can enter the Sembawang naval base. Joint military exercises are being held. For example, in October 2019, U.S. and Singaporean warships sank a decommissioned USS Ford frigate (FFG-54). That is, the two countries are preparing to fight together, and this fact makes Singapore a de facto part of the American coalition in the western Pacific. The United States takes this seriously, since they are actively involved in arming the Singapore Air Force with the latest aircraft.

This is not surprising, since we are talking about strategic interests. Singapore is located at the eastern exit from the Strait of Malacca - the most important shipping line in Southeast Asia, along which the main sea freight flows from Asia to Europe and Africa. About 50 thousand merchant ships pass through the strait annually. A shipping channel runs along the south coast of the island, and Singapore controls the airspace above it.

Strait of Malacca Shipping
Therefore, a small island is of great importance in the likely sea blockade of China. In the event of a major US-Chinese conflict, Singapore, of course, will take the side of the United States and will be able to impose a ban on the passage of Chinese ships along the Strait of Malacca, which will create serious and intractable problems for China.

China cannot do anything about it. It does not have such newest aircraft to withstand the latest Singaporean aircraft, and does not have the ability to create its numerical superiority in the air in the region of the Strait of Malacca (a strait outside the combat radius of Chinese aircraft based on coastal airfields). Theoretically, if China had three full-fledged aircraft carriers, it could try to ensure the passage of its ships with a strait. But the Chinese carrier fleet in the event of a conflict there will be many other equally important tasks. So the Strait of Malacca will be closed, and China will not be able to open it with military force. This is a fact of very great strategic importance.

US Assistance in Conflict with China

But the matter is not limited to one control of the strait. The Singapore Air Force is clearly preparing to fight far from its native airfields. All forty A-15SGs from the 142nd and 149th squadrons are based at the Paya Lebar airbase, and five KS-130B air tankers from the 122nd squadron are based here. At Changi East airbase, 20 F-16D aircraft of the 145th squadron and four A330 MRTT airborne tankers of the 112th squadron are based. In essence, these are air units in which tanker aircraft are attached to fighter jets. With air refueling, Singaporean Air Force aircraft can operate in almost the entire South China Sea.

And where can Singaporean fighters with tankers go? The only area outside the combat radius of Singaporean aircraft without refueling in the air where warfare can be expected in principle is the disputed Spratly Islands in the South China Sea, about 1500 km northeast of Singapore.

It is interesting that Singapore acquires aircraft with vertical take-off and landing, although it does not have special problems with basing its aircraft on ground airfields. Singapore also does not have remote islands where aviation presence would be required and where it would be difficult to build a full-fledged airfield. In the United States, Britain and Japan, the F-35B is designed to be based on aircraft-carrying ships: aircraft carriers, large landing ships or helicopter carriers, as in Japan. However, there are no such ships in the Singapore Navy, and probably are not expected.

From this we can conclude the following. It is assumed that the Singapore F-35B can operate with the support of aircraft carriers of the United States or Japan. For example, American ships of the Wasp type or similar Japanese ships of the Izumo type can support the operation of these aircraft.

So Singapore’s acquisition of the latest aircraft, in essence, represents a strengthening of the forces allied to the Americans in the South China Sea in the event of an aggravation of the situation, clashes over the disputed islands, demonstrations of force, and similar military actions. For island defense, the F-35B is clearly redundant; Singapore has no close opponents who could challenge him. Relations with Indonesia are friendly and partnership, relations with Vietnam also pursue the goals of developing strategic partnership. The recent controversy over the invasion of Vietnam in Kampuchea in 1979, in which Singaporean Prime Minister Li Xianglong accused Vietnam, did not affect the relations between the two countries and could not be the reason for the purchase of weapons. There remains only the option of helping the United States in a possible conflict with China.

Help can be very effective. In combination with Allied aircraft carriers, Singaporean F-35Bs can generally be in the most unexpected places like Taiwan or Okinawa and can operate as part of mixed formations.

Since the aircraft require the deployment of ground handling services, the purchase of these aircraft by Singapore creates a fundamental opportunity for the F-35 allies (USA, UK, Australia, Japan) to base and be serviced at Singapore air bases. Especially for the UK, with 15 F-35Bs. This feature reduces the dependence of US aviation and its allies on refueling in the air and facilitates the conduct of probable military operations.

We are in Yandex Zen
Situational analysis of the death of the MH17 flight (Malaysian Boeing 777), made on the basis of engineering analysis from 15.08.2014
Results of the week. “In our cooperative, the board is always agreed”
27 comments
Information
Dear reader, to leave comments on the publication, you must to register.