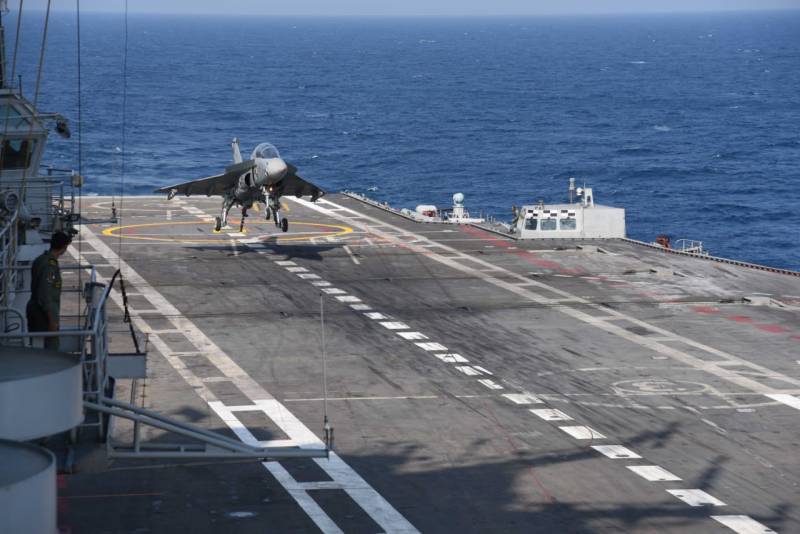 January 11, the Indian fighter Tejas carrier-based modification first landed on an aircraft carrier. The next day, the first take-off took place. Over the next few days, new flights took place to collect the necessary information. Trials of a carrier-based fighter may be cause for pride, but the real state of affairs in the Tejas project does not lead to optimism.

As you know, the development of the promising LCA Tejas fighter for the Indian Air Force started back in the early eighties, and the first flight was completed only in 2001. A few years after that, there was a proposal to develop a deck-based modification of the aircraft that can serve existing and promising aircraft carriers.

The development of the deck modification of the N-LCA Mk 1 Tejas was carried out by Hindustan Aeronautics Limited in the 2009s. In 2012, the Ministry of Defense ordered the construction of six prototypes. In April 1, flight tests of the first prototype with the designation NP2015 began. In February 2, flight tests of the single-seat NPXNUMX prototype began. For several years, construction of another machine has been ongoing. The rest of the aircraft ordered will probably never be built.

Even before the end of the tests, in October 2016, it was decided to stop work on the N-LCA carrier-based aircraft. The main problem was the lack of performance characteristics. During the tests, it was found that the “Tejas” has insufficient thrust-weight ratio. Take-off from the springboard at maximum weight was not possible, which severely limited the combat qualities of the aircraft. 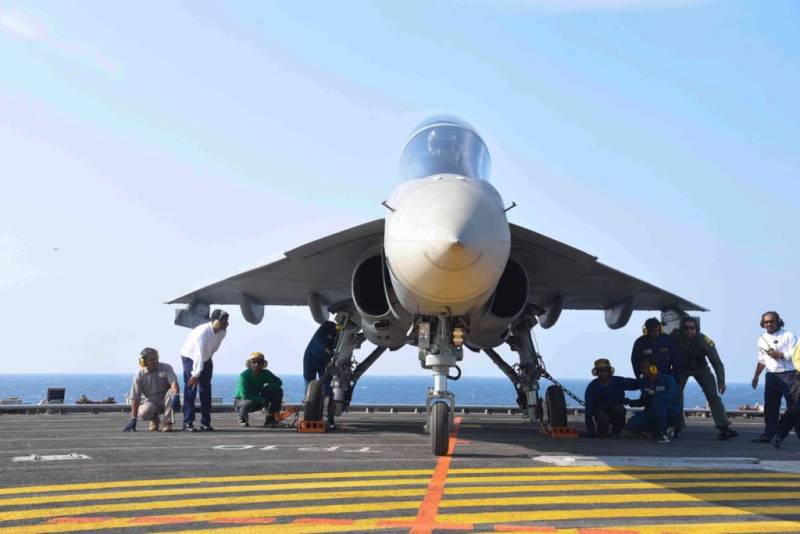 Photo: Indian Navy / www.livefistdefence.com
In connection with the abandonment of the existing deck Tejas Mk 1, it was proposed to develop a new aircraft for fleet with higher performance. They also launched a tender to find a suitable foreign car.

In March 2018, the Indian Ministry of Defense came up with a new proposal. As part of the Made in India concept, it was proposed to expedite the work on the LCA Tejas program as a whole - including the resumption of the design of the deck aircraft. Despite the lack of a common opinion and some resistance in naval circles, the two decked "Tejas" returned to the test.

In July 2018, the prototype Tejas NP2 took off again. Before this test phase, the aircraft was finalized with the installation of new equipment, including landing hook. A few weeks later, tests began on the ground-based complex Shore-Based Test Facility (SBTF), which simulates the deck of an aircraft carrier with a springboard and finishers.

Last September, at the SBTF complex, full-scale take-off and landing tests began with maximum simulation of work on an aircraft carrier. Prototypes NP1 and NP2 took off from the springboard and landing on the finisher. Tests on the ground deck simulator made it possible to work out all take-off and landing modes, after which permission was obtained for testing in real conditions. 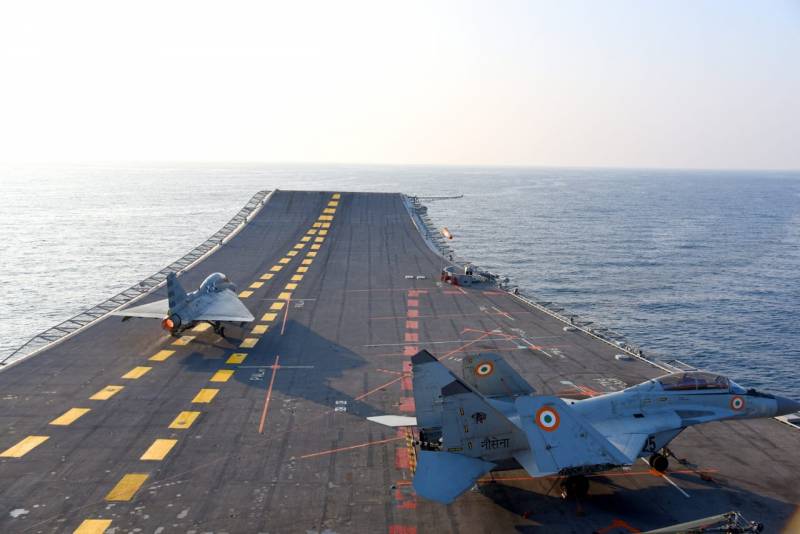 Photo: Indian Navy / www.livefistdefence.com
On January 11, 2020, the experimental N-LCA Tejas NP2 aircraft first landed on the deck of the Vikramaditya aircraft carrier. January 12, the first take-off from the springboard. Over the next few days, new flights were conducted with take-off and landing on the deck. As part of these activities, the necessary data was collected, which should be used when refining a deck aircraft.

The LCA Tejas program is constantly confronted with a variety of problems. They led to a serious delay in the design, construction and testing of experimental equipment, etc. Now, the same setbacks haunt the design of a carrier-based fighter. As a result, the prospects for N-LCA Tejas are at least unclear - if successful completion of the project is even possible.

The construction of the experimental “Tejas” deck-mounted was launched a little more than 10 years ago, and since then only two of the six machines ordered have been made. The remaining ones, probably, will not be built for one reason or another. The NP1 and NP2 fighters are already in their second test cycle, but their future is uncertain.

Already during the first phase of testing in 2012-16. it was found that the carrier-based fighter has insufficient characteristics and cannot solve part of the combat missions. To correct these shortcomings, a substantial revision of the project is required, which can ensure the growth of the main characteristics. However, such work was not carried out, and the equipment was brought to a new stage of testing without key modifications.

Last fall, two Tejas fighters were tested at the SBTF ground complex. A few days ago, flights from a real ship took place. Prototypes have shown their ability to take off and land on the deck of an aircraft carrier, but you can’t count on more. 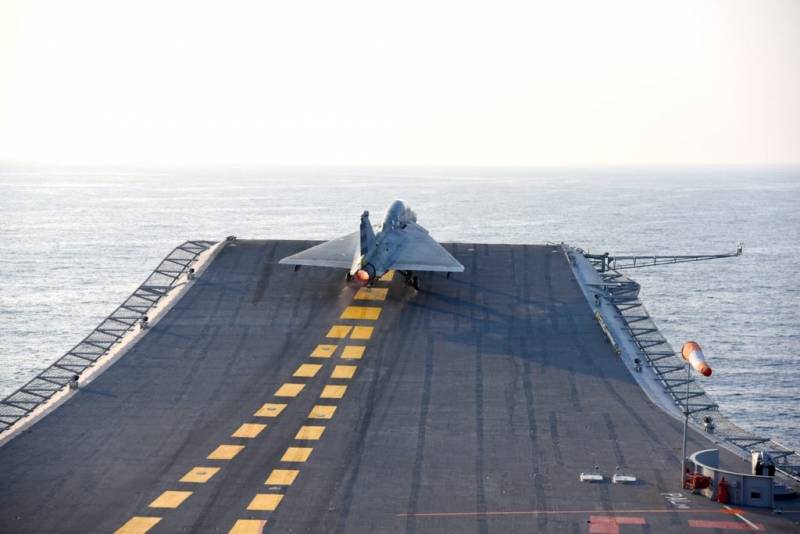 Photo: Indian Navy / www.livefistdefence.com
Tests at Vikramaditya were carried out with rather stringent restrictions on take-off and landing weight. As a result of this, only the fundamental possibility of working on an aircraft carrier is shown - without demonstrating specific combat capabilities. However, in the past it was established that, with restrictions on mass, the Tejas is still able to carry some ammunition.

Thus, at the moment, the N-LCA Tejas Mk 1 project looks very strange. The aircraft was brought to the test on an aircraft carrier and confirmed some of its capabilities. With all this, the real combat qualities of a carrier-based fighter are far from desired. Due to weight restrictions, the Tejas cannot carry a large fuel supply and maximum ammunition. As a result, the future of the decked Tejas in its current form is uncertain.

Back in 2016, there was a proposal to create a new version of the carrier-based fighter with higher characteristics. The N-LCA Mk 2 project, proposed by DRDO and HAL, provided for the modernization of the Tejas using a more powerful foreign-made General Electric F414 engine. Then this proposal received nominal support, but over the past time has not actually advanced beyond the preliminary study.

Last year, aircraft manufacturers launched a new proposal called the Twin Engine Deck Based Fighter (TEDBF). This project offers a modification of the N-LCA Mk 2 aircraft with two F414 engines. The first experimental aircraft of this type is promised to be built in the middle of the decade. The Indian Navy is still studying this proposal and has not yet issued an order. 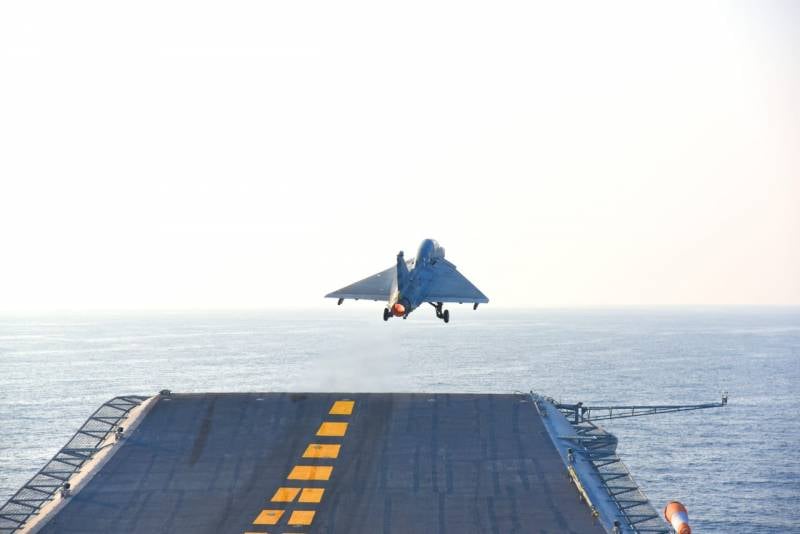 Photo: Indian Navy / www.livefistdefence.com
After stopping work on the N-LCA in 2016, a tender was announced for the purchase of carrier-based fighter aircraft of foreign design. To equip its aircraft carriers, the Indian Navy intends to buy 57 aircraft. Now the fleet is studying the proposals and is preparing to choose a winner.

The tender for the purchase of foreign equipment is actually an alternative to the domestic project N-LCA Mk 1. The situation with the TEDBF project is different. Such a fighter is proposed to be developed regardless of the outcome of the current tender. Its development should not exclude the purchase of finished samples.

A future without a future

The LCA Tejas program has long been notorious. The project is extremely slow and cannot give all the desired results. Moreover, due to constant problems and time shifts, the promising Indian fighter is hopelessly outdated even before being adopted. An attempt to develop a decked version of this aircraft is also far from successful completion.

The base fighter Tejas Mk 1 does not differ in high performance, which is why its deck modification has very limited practical value. The consequence of this was new projects and a tender for the purchase of imported equipment. Recent tests of deck aircraft on the ground complex and on a real aircraft carrier have allowed me to gain the necessary experience, but cannot change the future of the project.

Apparently, over the next few years, the Indian Navy will still choose a new decked aircraft to equip its aircraft carriers. However, it will be an imported car, and the deck modification of the N-LCA Mk 1 Tejas has no real prospects in this context. New developments on the basis of "Tejas" may be more successful and successful - however, results of this kind will not appear earlier than the middle of the current decade.

We are in Yandex Zen
Fighter HAL Tejas. Failure or reason for pride?
An-12 in Afghanistan
16 comments
Information
Dear reader, to leave comments on the publication, you must to register.