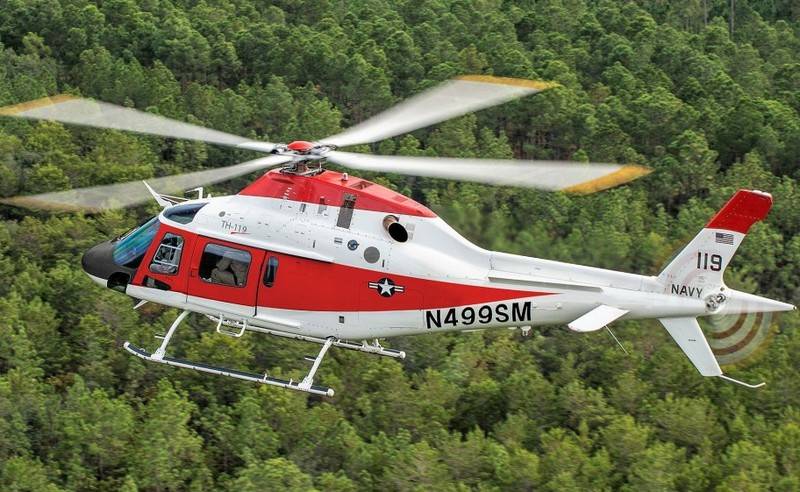 
On January 13, the AgustaWestland Philadelphia Corporation received a contract from the United States Navy for the supply of the first 32 light Leonardo AW119Kx helicopter training helicopters. Helicopters that will receive the US official military designation TN-73A should be delivered by the end of October 2021.

According to the bmpd blog, the Italian company Leonardo with its AW119Kh helicopter won the U.S. Navy competition for replacing the Bell TH-1985B / C Sea Ranger helicopters used in 57 as a military training modification of the well-known Bell 206B-3 light helicopter. In addition to the Leonardo AW119Kx helicopter, Bell 407GXi and Airbus Helicopters H135 helicopters participated in the US Navy competition.

In total, the US Navy plans to acquire 130 TN-73A helicopters as part of a program to upgrade the fleet of training helicopters. Contracts for the next 98 cars are planned to be issued from 2022 to 2024 financial years. Helicopters will be armed with three training squadrons of the 5th training aviation wing of the sea aviation U.S. Navy at Whiting Field, Florida. Helicopters will also receive a Helicopter Instructor Training Unit (HITU).

The AW119Kx helicopter has a maximum take-off weight of 2850 kg and is equipped with one Pratt & Whitney Canada PT6B-37A turboshaft engine with a take-off power of about 1000 hp.

Previously, the AW119 helicopter was selected as the training and training of the Israeli Air Force.
Ctrl Enter

We are in Yandex Zen
The 20 rating of the largest arms deals, decisions on which were made in 2012
The helicopter market is expected to replenish
6 comments
Information
Dear reader, to leave comments on the publication, you must to register.