Parade of the Titans

More recently, the whole world was discussing launching the head of the Chinese universal landing ship type 075, which, recall, was carried out on September 25, 2019. And at the end of the year, they talked about adopting the new Chinese aircraft carrier, project 001A, or Shandong. And now, the inhabitants of the Middle Kingdom have a new reason for pride, and we have a new topic for discussion.

January 12, 2020 at the naval base of the North located in Qingdao (east of China) fleet The naval forces of the People’s Republic of China (PLA Navy) commissioned the first destroyer of Project 055 Nanchang. Recall that this ship began to be built in 2014, and launched on June 28, 2017.

From the side the event may seem insignificant. Indeed, what can one destroyer give the Chinese fleet? Especially against the background of such giants as Liaoning or Shandong. In fact, the answer lies in the details, although in this case it will not be difficult to discern them.

The fact is that the Nanchang became the largest non-aircraft carrier combat ship of the Chinese fleet: in size it is second only to the aforementioned Shandong and Liaoning aircraft carriers, UDC type 075 and Qinchenshan type helicopter carriers (or project 071). It is worth recalling that on the sixth of June last year, the Chinese launched the eighth such ship: now really, zeal that deserves respect. 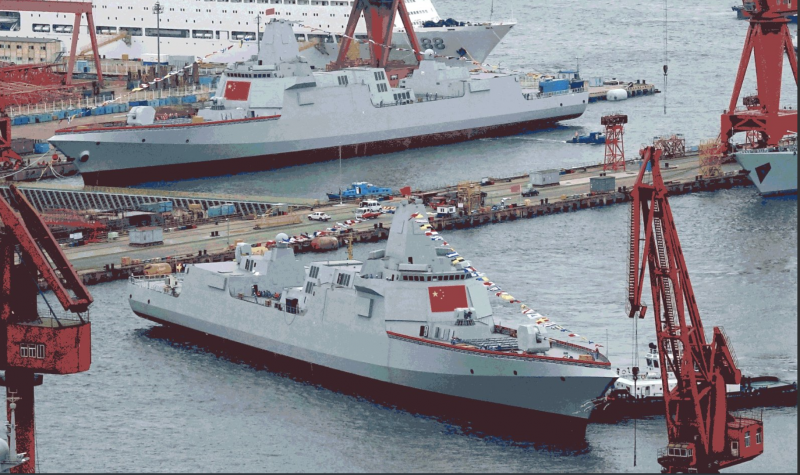 However, the size (and, accordingly, the potential capabilities) of the destroyer of the project 055 cost little. It will be appropriate to recall the American "Zamvolt" - the most powerful destroyer in the world. Which, however, due to its incredible cost, was built in a series of three ships and will not return to the project anymore. As you probably already guessed, the Chinese have a different situation: today, in addition to the Nanchang, five such ships have already been launched.

As The Diplomat reported in 2018, the PLA fleet wants eight Project 055 destroyers, but it is possible that this is only the beginning. Specialists at GlobalSecurity.org, citing military expert Gu Huoping, write that the number of destroyers of type 055 can reach 16. This, of course, is less than the number of Ticonderoges built in all time (27 ships) and much less than the number of destroyers built by Americans " Arly Burke "(67!). However, the old Ticonderogs began to be actively written off in 2004, and the Arly Burke is still substantially smaller than the destroyer of project 055. 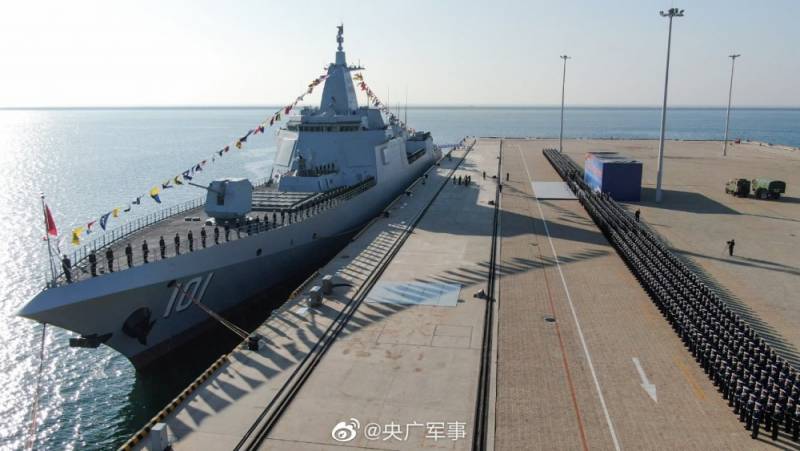 All this again does not make sense to consider outside the context of the combat potential of the ship, which we, probably, because of the "glorious" Chinese tradition, know little for certain. Undoubtedly, the basis of armaments is universal vertical launchers (UVP) with 112 cells for missiles for various purposes. 64 cells of transport-launch containers are placed in front of the superstructure, another 48 cells are located in the center of the superstructure, in front of the hangar. Perhaps a comparison with the Ticonderoga is not entirely appropriate, but the cruiser, as we know, has 122 UVP cells for Tomahawk cruise missiles and SM-1 anti-aircraft missiles.

A detailed classification of the composition of the weapons of the Chinese destroyer is difficult due to the lack of confirmed data. But according to English sources, universal launchers can be used for the following types of missiles:

The range of the anti-ship missile YJ-18, according to experts, can reach 540 kilometers. The range of the CJ-10 (at least in its ground version) is estimated at about 2000 kilometers. In addition, the ship carries one 130-mm H / PJ-38 artillery mount, one 30-mm H / PJ-11 anti-aircraft artillery system, and HHQ-10 anti-aircraft guided missiles (24 cells). The ship is also able to carry two medium-sized military transport helicopters Changhe Z-18. 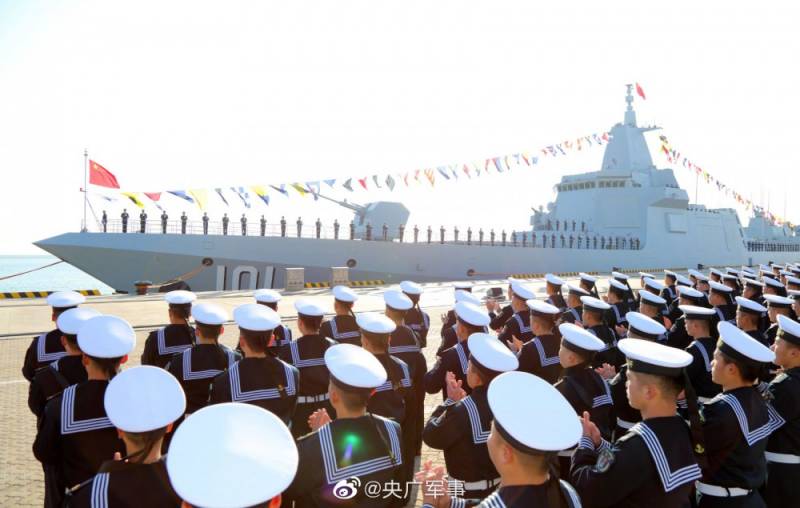 According to previously announced information, the power plant of the project 055 destroyer is built around the COGAG system, which is based on four QD-280 gas turbine engines with a capacity of 38 thousand horsepower each. Total power - more than 150 thousand horsepower. In addition, there are six QD-50 gas turbine generators on board. It is assumed that the speed of the destroyer will reach 30 knots (55 kilometers per hour). The crew of the ship is more than 300 people.


Great Britain in its best years used the principle of "equality of the fleet of the British fleets of the two strongest sea powers combined." America, by its example, does not threaten to realize something like this. Last May, Popular Mechanics magazine reported that China has more warships than the United States. The Chinese Navy was able to reach 300 ships, 13 more than the United States Navy.

And in December 2019, Chinese shipbuilders established a kind of world Record: they built and launched nine destroyers for their fleet in 2019. In total, in 2019, Chinese shipyards launched 23 surface ships in the interests of the Navy of the People's Republic of China, and these are, in particular, rather large combat units. 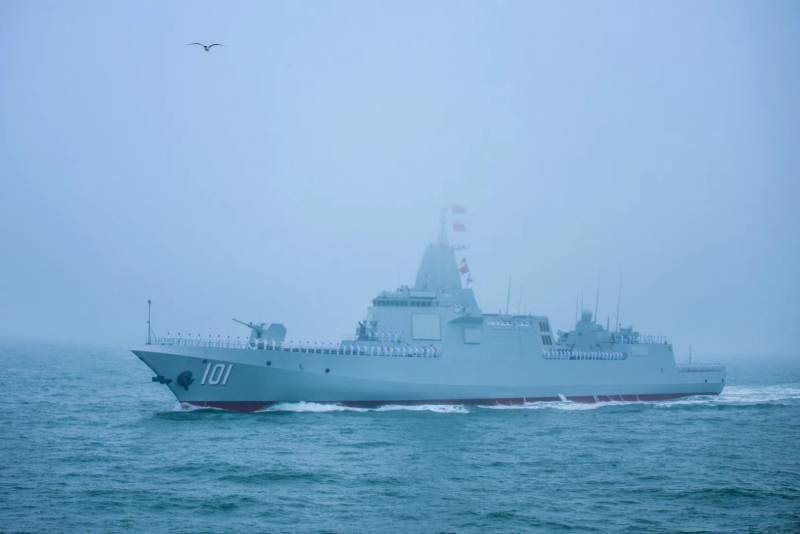 And yet there is a fly in the ointment. In November 2019, the South China Morning Post newspaper reported, citing a source in the Ministry of Defense of China, that the program for building Chinese aircraft carriers would be frozen, and China would have four such ships in total. This seems like misinformation, but it’s worth saying that the Chinese have not yet learned how to build “full-fledged” aircraft carriers: there are no launch catapults, no carrier-based invisible fighters. Not much experience. But there are problems with nuclear submarines ...

And what about the project 055 destroyers? By themselves, they are not a serious adversary for the US Navy: aircraft carriers are the main tactical unit after the Second World War. Thus, the destroyer is seen in the context of the regional strengthening of the Chinese fleet, and not at all as the “killer of American aircraft carriers,” as they once called (and, most surprisingly, continue to call it) the cruiser of Project 1144 Orlan.

We are in Yandex Zen
The combat capabilities of the new Chinese aircraft carrier Shandong
055 project. Chinese destroyer the size of a cruiser
115 comments
Information
Dear reader, to leave comments on the publication, you must to register.