The capabilities of the Su-57E in a competitive battle with the F-35A. Export potential without leakage of critical technologies 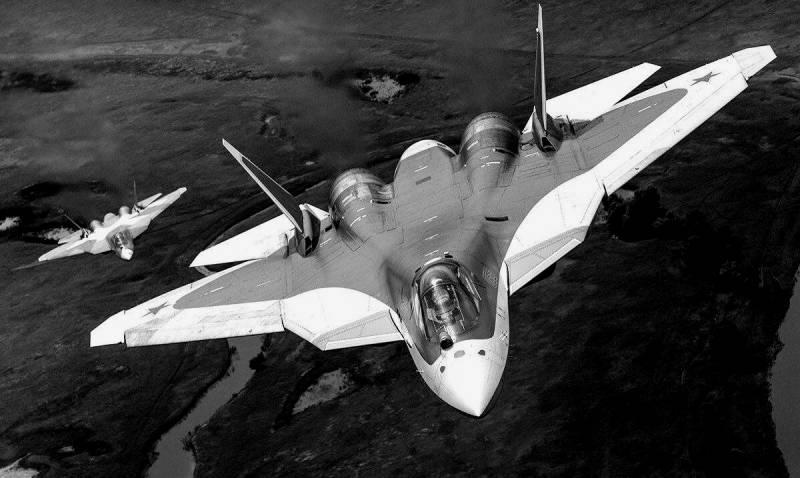 As you know, the criterion of "cost - effectiveness" is one of the primary indicators that provide experts and knowledgeable observers with the opportunity to assess the degree of success of a program for developing a particular type of promising military equipment, as well as to predict the future position of its export modifications on regional and global arms markets. Meanwhile, to conduct this kind of analysis, the expert should have information not only about the average cost of the product, but also about the “optional package” attached to this product under contracts concluded with foreign customers.


Against this background, the assessment of the export potential of the 5th generation Su-57E domestic multi-functional fighter is particularly relevant in comparison with the American promising Fn-35A Lightnung II fighter, which is actively promoted on the world arms market, all the more so since the Russian-Egyptian contract for the supply of the Air Force Algeria's first 14 vehicles, concluded between the defense department of this North African state and Rosoboronexport at the end of December 2019, are already ready for sale, and gaining operational b Eva readiness the first production Su-57 "first step" for VKS Russia will take place by July 2020.

The potential of the Irbis-E airborne radar is not colossal, but quite acceptable for a competitive confrontation

According to the Military Parity publication, citing anonymous informed sources, the “optional package” of Su-57Es prepared for export sales will be noticeably different from the electronic “filling” of the Su-57 combat aircraft of the Russian Aerospace Forces. In particular, the “heart” of the on-board electronic equipment of exported vehicles can be the on-board radar with passive FAR N035 “Irbis-E” mounted on multi-purpose fighters of the “4 ++” Su-35C generation, while the modification for the airborne complex will have a promising multi-module airborne radar system with AFAR H036 "Squirrel", represented by the X-band front-view antenna array H036, side-view antenna arrays Н036Б-1-01Л and Н036Б-1-01Б (centimeter X-band operation), as well as antenna modules of meter L- d wavelength range Н036L-1-01 integrated into the socks of the wing of the Su-57.

Unlike the AFAR-radar AN / APG-81, developed by the Electronic Systems division of the Northrop Grumman military-industrial company to equip the F-35A fighters, as well as the Squirrel (Sh-036) H121 radar from the Istok Scientific-Production Enterprise and NIIP them. V.V. Tikhomirova, with transmitting and transmitting modules with individual gallium nitride low-noise microwave transistors (amplifiers) and attenuators (attenuators) in the architecture of the receiving and transmitting paths, the onboard radar with passive phased array H035 Irbis-E can boast only one transmitter based on the lamp traveling wave, feeding a certain group of transceiver modules through phase shifters. As a result, the Irbis-E radar is incapable of generating a flexibly simulated radiation pattern with spatial “dips” in the direction of the directors of electronic interference from the enemy (EA-18G “Growler” aircraft, as well as carrier aircraft for the RE / ANQ-249 NGJ-MB containers) ), in connection with which the level of its noise immunity will be noticeably lower than that of the Lightning radar and Squirrel.

Moreover, the “optional package” of F-35A multi-role fighters in the “Block 4+” modification (both for the US Air Force and for export sales) provides for the introduction of electronic warfare mode in the AN / APG-81 airborne radars, which will be achieved through a software update armament control systems with loading software add-ons that enable the use of Radio Frequency Tunable Filters (RFTFs) integrated into the architecture of the APG-81 transmission path and feeding certain arrays of transceiver modules. Thanks to this, the APG-81 station will be able to form a narrow high-energy “interfering beam” in the form of targeted response, as well as imitation interference, significantly reducing the effective detection range of radars based on Cassegrain antennas, waveguide-slot antenna arrays, as well as passive headlamps. Unfortunately, Irbis-E does not have such a reserve.

Nonetheless, the unique energy potential of Irbis-E (peak power of about 20 kW and power in the “precise target tracking” mode of about 2 kW), providing a target detection range of type “F-35A” (EPR 0,2 sq. M ) more than 200 km, can still give odds to any Western European or American airborne radar station (especially when the enemy uses medium-intense radio electronic interference). For example, the same AN ​​/ APG-81s are capable of detecting the Su-57E (EPR about 0,2-0,3 sq. M) at a distance of no more than 120-130 km, and this is in a no-noise environment! When the pilot uses the "drying" of the on-board complex of electronic warfare Himalayas, this figure will decrease to 110 or 100 km.

At about the same distance, the Irbis-E radar will detect the F-35A, whose pilot will use the APG-81 airborne radar in the radio counter mode. Therefore, in a duel situation caused by a hypothetical long-range aerial combat, the Su-57E with the H036 radar and the F-35A staff will have approximately equal chances of establishing air supremacy, especially given the fact that the development program of the long-range long-range aerial combat rocket “Product -180 "with a" long-playing "dual-mode solid propellant rocket motor reached the final stage.

This solid propellant rocket motor, with a specific thrust impulse of more than 265 s, will provide the “Product 180” with high speed and energy qualities (and, therefore, the ability to perform intensive maneuvers during the interception of the target) even at the terminal section of the trajectory located 130-140 km from the vanishing point from the inside fuselage of the Su-57E suspension. As a result of this, the 5th generation export “drying” is able to establish stable parity even with those F-35A, which in the future will be equipped with the “long-range” Meteor MBDA “Air-Defense” with integrated rocket-propelled engines.

We are in Yandex Zen
F-35A and the new look of Hel Haavir. Netanyahu's loud statement "stumbles" about the power of modern Iranian air defense
Situational analysis of the death of the MH17 flight (Malaysian Boeing 777), made on the basis of engineering analysis from 15.08.2014
50 comments
Information
Dear reader, to leave comments on the publication, you must to register.