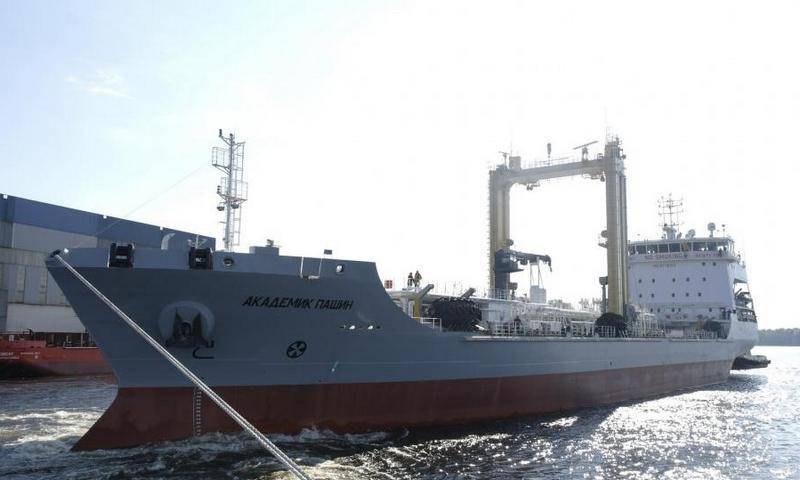 Project 23130 medium sea tanker “Akademik Pashin” will be introduced into the Northern fleet January 21 this year. According to the press service of the Ministry of Defense, the ceremony of raising the flag of the auxiliary fleet of the Navy will be held in Severomorsk.


According to the report, the crew of the ship, the command of the Northern Fleet and invited guests will take part in the ceremony.

As previously reported, last year the new marine tanker Akademik Pashin successfully passed the full test program in the Barents Sea. At certain stages, fleet warships took part in the test of the tanker, including the Peter the Great heavy nuclear missile cruiser and the Admiral of the Fleet of the Soviet Union Gorshkov frigate.

The construction of the Akademik Pashin medium-sized offshore supply tanker has been underway since April 26, 2014 under a contract with the Russian military. The ship is intended for the Northern Fleet. The tanker was withdrawn from the boathouse of the plant on March 18, 2016 and launched on May 26, 2016. Deadweight at maximum load of about 9000 tons. The length is the largest 130 meters, the largest width is about 21 meters, the maximum draft is about 7 meters. Maximum speed 16 knots. Autonomy of 60 days. The crew of 24 people. Cruising range is 9000 nautical miles, and one of the main tasks is escorting aircraft carriers.

The vessel is named in honor of Valentin Mikhailovich Pashin, Hero of Russia, an outstanding shipbuilding engineer, full member of the Russian Academy of Sciences, long-term director of the Krylov State Scientific Center.

We are in Yandex Zen
"Akademik Pashin" in construction
For the needs of the Russian Navy, a new medium sea tanker was laid at the Nevsky Plant
62 comments
Information
Dear reader, to leave comments on the publication, you must to register.