The disputes between Russia and America over medium-range missiles and strategic weapons have arisen mainly because, according to the Americans, China has sharply increased its combat potential. Without it, bilateral treaties lose their meaning.


The topic of disarmament does not interest China at all. In Beijing, apparently, they decided to equalize their potential with America and Russia and do not want to bind themselves with any obligations. Nuclear submarine missile carriers, modern destroyers, aircraft-carrying ships - real or potential carriers of nuclear weapons.

All this is quite well fixed by means of space intelligence of countries of interest. More complicated with China's missile programs. They are tightly covered with a veil of secrecy. One gets the feeling that through this veil one cannot break through the all-seeing eye of probable opponents.

It develops, first of all, among the Chinese themselves. This can be seen from the way their military experts puff their cheeks, how confidently the Chinese military publications are debunking the successes of others. Sometimes it comes to elementary indecency, not to say absurdity.

So it was after the recent crash near Khabarovsk of our Su-57. The Chinese edition of Sohu criticized the latest Russian aircraft and sarcastically advised to thank India for saving the pilot, hinting at joint Russian-Indian work on the ejection device. To top it off, to completely convince my readers of the worthlessness of Russian aircraft manufacturers, Sohu listed our catastrophes of the past year - from a submarine accident with fatalities to a fire on an aircraft carrying cruiser.

They can see everything from above, you know that ...

China sees everything, knows everything! Only he himself is an open book for prying foreign eyes. The US media published photos from the secret air base (range) of Dingsin, located in the Gansu province in the Gobi Desert. Photos are the freshest. They were made by Planet Labs on January 6, 2020. There are images from space, there are ordinary photographs of the modern Chinese military aviation technology, including the latest aircraft in a factory yellow color. 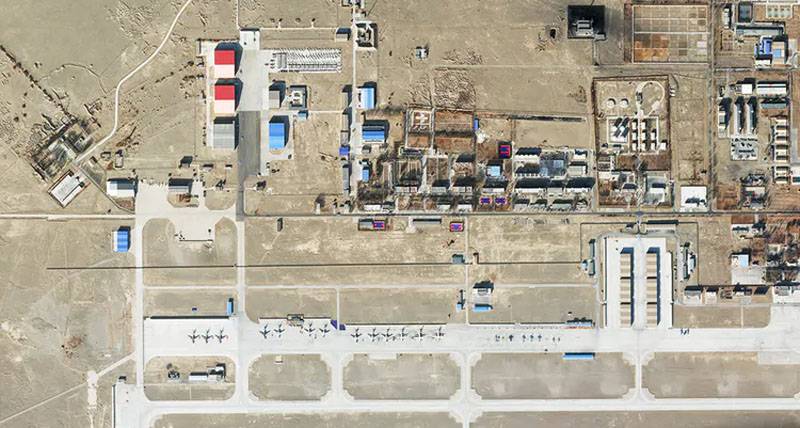 China also see. Moreover, not only intelligence agencies, but also the usual military publications open to all. The Dingxin Desert Air Base in the Gobi Desert in the 1960s and 1970s was built away from human eyes by the Chinese defense minister of that time, Marshal Lin Biao. Since then, the object has grown to a gigantic scale.

Actually, Dingsin himself became an aviation test base. At the time of the shooting, according to THE WARZONE, “there were about 13 H-6 bombers and other options, as well as six J-10, 5 derivatives of the Su-27/30 / J-11 Flanker, 12 JH-7, six aircraft F-7, four F-8s and three Y-9s. ” The photographs show many drones and aircraft intended for use in tests as targets.

A little north of Dingxin is an object for testing Chinese air defense systems. 45 kilometers away is the large JiuquanSatelliteLaunchCenter complex. One of the main space launch complexes of the country, supporting manned and unmanned space missions.

Finally, in the very north of this grand secret facility in the Gobi Desert, is one of the country's main missile ranges, where new types of weapons are being tested. It is not difficult to guess that this is being done under the vigilant American eye.

In the United States, there are pictures taken earlier, where three new Chinese stealth fighter J-20s are recorded. And it is praised by the fact that satellite imagery allows you to fully control the aviation exercises held at Dingsin, for example, the largest - the Golden Helmet or the Golden Dart competition.

In the United States, it is believed that this base is similar to the American Nellis base, where various kinds of tests of aviation equipment are carried out and variants of aerial combat using various means of aviation are often played out. Nellis is one of the most actively used US air bases.

It is possible that, based on observations, the Americans have already made their conclusions on the fifth-generation Chinese fighter. Earlier in the United States, information appeared that some F-35s of earlier versions were intended to be used as an imitation of the J-20 for training air battles with an attempt to analyze the functionality of a Chinese fighter.