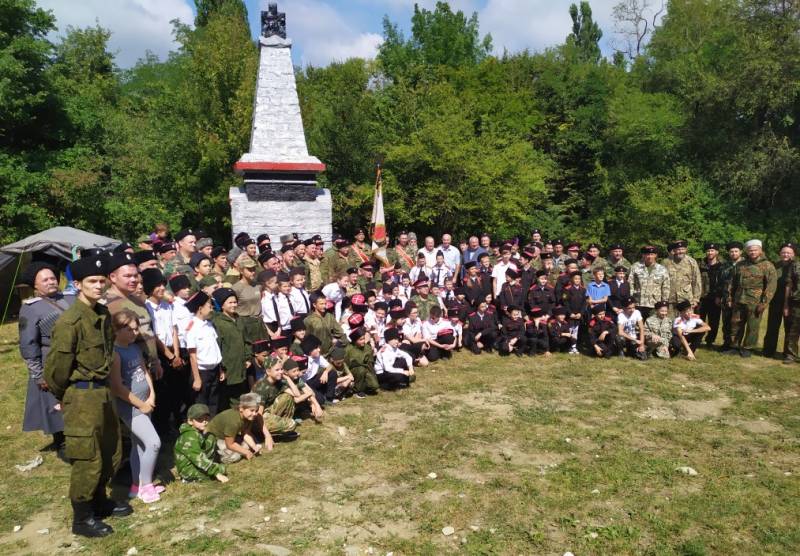 Lipkin commemoration at the monument to St. George's post

After the death of St. George’s post, the fallen heroes were buried in different places. One of them, along with commander Efim Gorbatko, rested in the cemetery of the village of Neberdzhaevskaya. Others, as it turned out later, were less fortunate; they were buried in the Neberdzhaev valley near the river, which later washed away the graves. Immediately after the funeral, the question was raised about installing a monument at the post, but for many years the battle site remained nameless.

The sad fate of the Neberdzhaevsky monument

History Monument to St. George’s post is sad. After the funeral in 1862, the construction of the monument and the collection of money for its construction were entrusted to Army foreman Vasily Stepanovich Varenik. Vasily Stepanovich, it is worth noting, took up the matter with all responsibility. Throwing a cry for the Cossacks, the foreman began to raise funds. But the region was just starting to settle in, new villages of Cossack migrants appeared, who still had to establish a way of life for their families, so the amount collected was not enough even for a memorial slab appropriate for the feat.

But Vasily Stepanovich did not stop there. His enthusiasm was fueled by the fact that the viceroy of the Caucasus himself, Grand Duke Mikhail Nikolaevich Romanov, initially took part in this matter. Later, this participation will be indicated in the inscription on the monument. However, when the foreman turned to the command with a proposal to add military funds to the collected money, he was refused. No matter how troubles Vasily Stepanovich, everything was useless. Finally, he had to turn over all the collected money to the Troops Administration. Such an injustice in relation to the fallen heroes is explained by the fact that the Caucasian war was on its way to an end, the state budget bore the burden of development of the Caucasus, as well as the resettlement of part of the highlanders, who for the most part voluntarily left these lands and left for the Ottoman Empire. 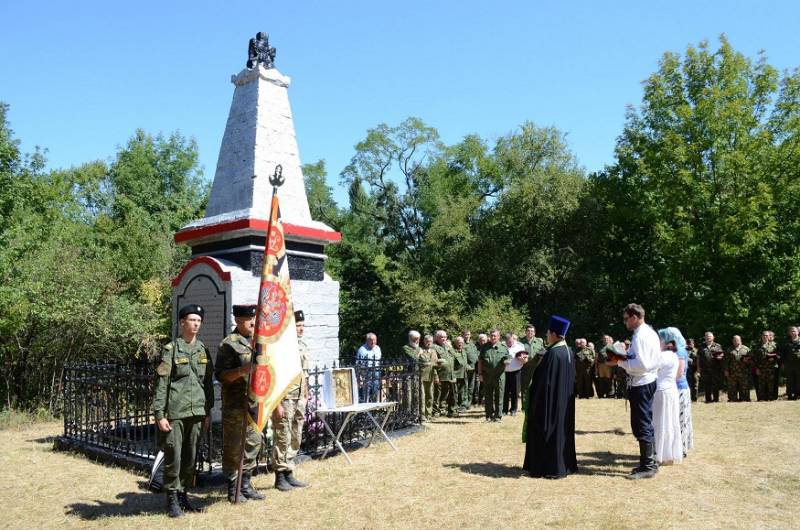 It would seem that history was forgotten, but the struggle for perpetuation of the memory of the Cossacks began Nikita Ivanovich Vishnevetsky. While still a 20-year-old officer, Vishnevetsky, with the permission of his superiors, comes to Novorossiysk and, spending his own money, conducts a survey of Circassians sailing to the Port, witnesses of the events at the Georgievsky post. Future Major General Vishnevetsky is one of those almost forgotten personalities, thanks to whom the memory of the heroes of the Caucasian War has been preserved. He is the author of many essays, including the fate of the centurion Gorbatko and his brothers in arms. In the latter, he explicitly points out that "the only purpose of this article of mine is to raise once again the question of setting up a monument."

But years passed, some wars gave way to others, and Neberjay continued to keep the terrible fate of a lonely fortification. By 1888, when Vishnevetsky once again raised the issue of the monument, the graves of the fighters of the St. George post near the Neberdzhay River were already blurred, and the fortification itself was torn down, turning into a plain mound. Only in 1900, the case of Nikita Ivanovich in perpetuating the memory of the Cossacks-plastunas of the post was successful. On September 4, 1900, with a large crowd of people, the long-awaited monument to the St. George Post was unveiled. By that time, Vishnevetsky was already a general, historian and philanthropist known in Yekaterinodar. 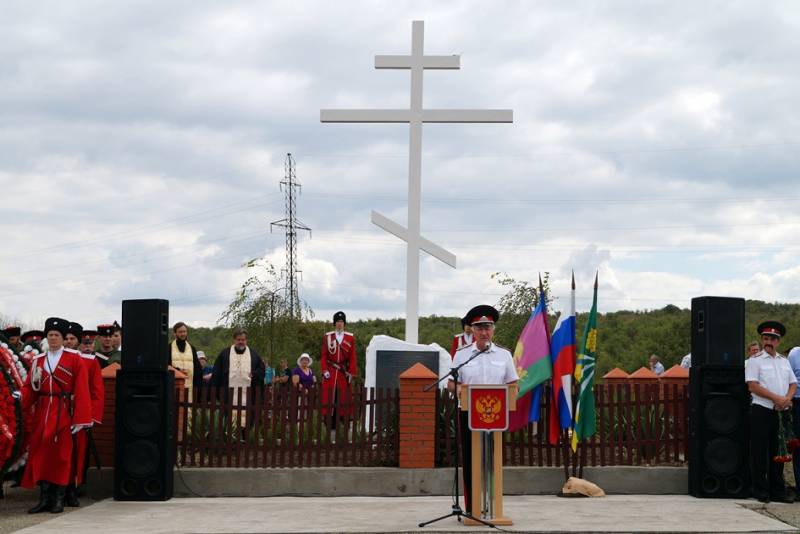 Monument to Gorbatko and his comrades in the village of Neberdzhaevskaya
Here the author is forced to note the following fact. In many materials, the installation of the monument is dated to 1882. However, the most striking initiator of the installation of this monument, General Vishnevetsky, who has visited Neberdzhay repeatedly, claims in his essays that even in 1888 there was no monument, so the date of 1900 is more likely to be correct.

Until 1920, young Cossacks took the oath at the monument on the site of St. George’s post. But the bloody wind of Russian hard times blew out this glorious tradition, and the monument remained abandoned.

The author does not want to discredit the Soviet period of power in our country, but at the same time, along with huge gains and undeniable successes, extremely specific problematic phenomena multiplied. So, in order to strengthen the position of the new government, Soviet historians quickly labeled colonialism at the last stage of the Caucasian War, despite the fact that hostile mountaineers were financed by capitalist opponents of the Soviet regime from France, Britain, etc.

The doctrines of the Soviet historians of the Caucasian War reached the point of absurdity. So, the Soviet Caucasian scholar Leonid Ivanovich Lavrov was so saturated with the doctrines of his time that in his 1937 Ubykhs he not only branded tsarism and Russian colonial (!) Troops, but also managed to weave Karl Marx and his ideology into his work, mentioning her more often than the name of Haji Berzek - the leader of the Ubykhs and the initiator of their resettlement to Turkey.

After such an ideological treatment, is it any wonder that some monuments to the heroes of the Caucasian war were literally rolled into concrete! For example, a monument to the heroic defense of the Mikhailovsky fortification and its main characters, Arkhip Osipov and staff captain Liko, was not just blown up in Vladikavkaz: valuable memorial material was later used to pave one of the stairs of the central park of culture and recreation.

In this situation, the only thing that saved the monument to the St. George post was its location - a mountain gorge away from the main roads, hidden by impenetrable forests. The monument, safely forgotten at the direction of new doctrines who want to curry favor with the authorities, calmly chach beyond the Markotkh Range. 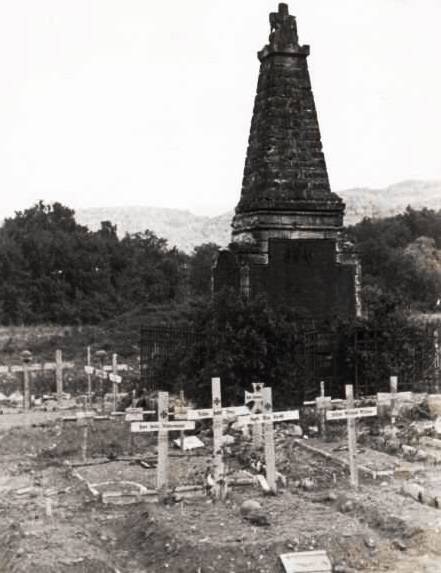 The next time he was captured on film due to ... the Germans. The Nazis decided that the place around the monument, on top of which a cross was erected, was just as well suited for the burial of German soldiers. And around the memorial to Russian Cossacks-plastunas, a German cemetery appeared.

In 1943, our troops knocked out Nazi invaders from Novorossiysk and the entire Krasnodar Territory, and the monument again plunged into sad nonexistence.

In 1954, construction began on the Neberdzhaevskoe Reservoir, which Novorossiysk urgently needed. A monument to the Cossacks also fell into the flood zone. It would seem that nothing more prevented just from flooding this area, nothing and no one but the builders themselves. Neberdzhai was built by war veterans who did not suffer from the doctrine of officials. Therefore, without unnecessary noise and public discussion, the monument was carefully moved from the flood zone to a safe place, where it is now.

Graves in the old cemetery of the Neberdzhaevskaya village

As the author has already indicated, part of the Cossacks found the last refuge in the cemetery in the village of Neberdzhaevskaya. At the same time, the brave Cossack woman, Gorbatko’s wife, was buried separately from her husband, who was buried with his comrades. A special monument was also erected above their grave - a large metal cross, the only one in the entire Neberdzhaevsky cemetery of that time. But this monument not only shared the fate of the long-forgotten memorial in the Neberdzhaev Gorge, it actually ceased to exist. 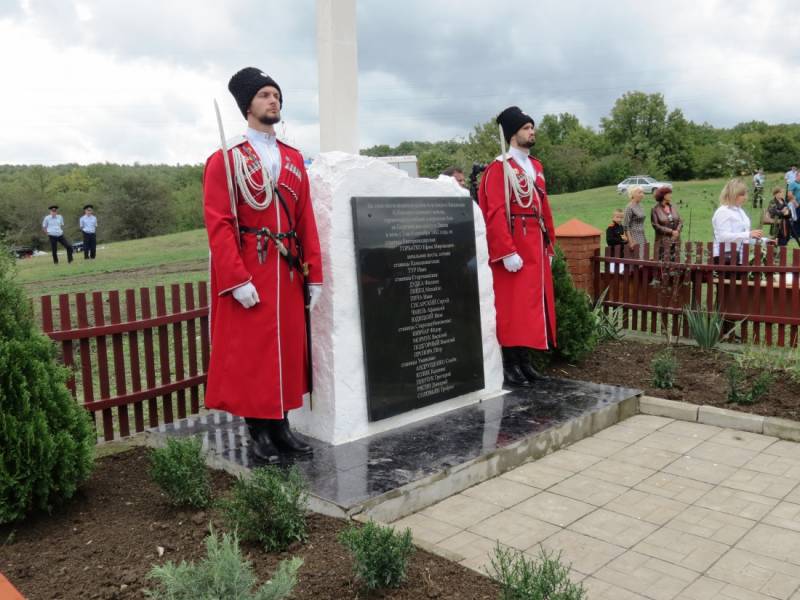 Local enthusiasts only after lengthy surveys of local old-timers were able to detect the burial of Cossacks. There was no trace of a metal cross, only oak boards remained, which were installed on top of the grave, because because of the rocky soil, the grave turned out to be shallow - not more than 70 centimeters.

In 2006, the restoration of the monument to the Cossack heroes began in the village of Neberdzhaevskaya. The monument was restored by different people. And the Cossacks, like Alexander Otrishko, and just the locals. Finances also attracted either their own or caring compatriots. 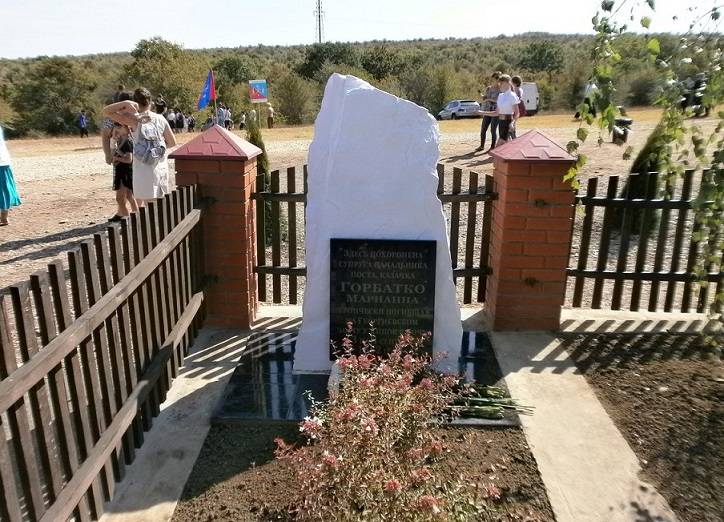 Monument on the grave of his wife Gorbatko
Along with the restoration of the monument, the process of adoption of the law of the Krasnodar Territory No. 1145-KZ “On the establishment of holidays and observances in the Krasnodar Territory” began. According to this law, the first Saturday of September is set as the date of the Lipkin commemoration. On this day, in the Neberdzhaevskaya valley and at the memorial cross in the village of Neberdzhaevskaya, Cossack events are held in memory of the ataman KKV, and the delegation of Cossacks from Taman, from Tuapse, Gelendzhik and, of course, Novorossiysk. Again, young Cossacks from the cadet corps reached this place.

The author hopes that this time the glorious history of the Fatherland will not be used for political purposes by either the left, the right, the “white” or the “red”.

Ctrl Enter
Noticed oshЫbku Highlight text and press. Ctrl + Enter
We are
The feat and death of the St. George postFeat Ikansko hundreds
8 comments
Information
Dear reader, to leave comments on the publication, you must to register.