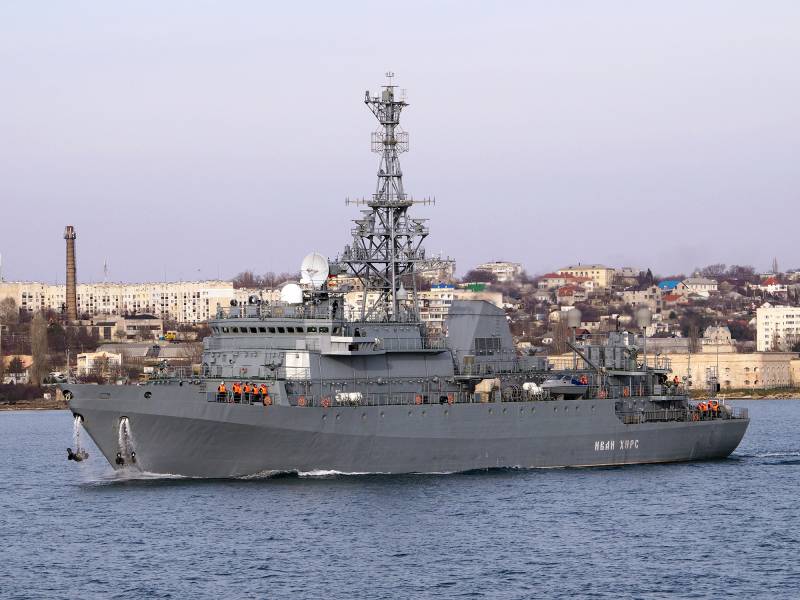 The incident involving two warships of the US Navy and the Russian Navy, which occurred in the northern part of the Arabian Sea on January 9, 2020, was treated differently by each of the parties and ultimately came down to mutual accusations. At the same time, the data news attracted increased attention to the participants in the incident with the dangerous rapprochement of two warships. First of all - to the new Russian reconnaissance ship (communications ship) "Ivan Khurs" of project 18280. Today it is the most modern reconnaissance ship of the Russian fleet.

Engineers of the famous Iceberg Central Design Bureau were responsible for the development of reconnaissance ships (communications vessels) of Project 18280. The main specialization of this Central Design Bureau is the creation of icebreakers, as well as auxiliary ships and special purpose ships for the Russian Navy. Back in Soviet times, the specialists of this design bureau created the world’s largest nuclear reconnaissance ship of the 1941 Ural project, which has no analogues in the world, and became the largest surface ship in the Russian Navy with a nuclear power plant on board. Also, Iceberg specialists designed reconnaissance ships of project 1826.

The new Russian ocean-going reconnaissance ships of project 18280, created by the specialists of the Iceberg Central Design Bureau, are a further development of previously implemented projects at a new technical and technological level. At the Severnaya Verf shipyard in St. Petersburg, two ships of this project were built for the Russian fleet. Officially, they are all designated as communication vessels. The first ship, named "Yuri Ivanov", was laid back in 2004, the ship was launched only in 2013, and the ship was accepted into the fleet in 2015. The second reconnaissance ship of project 18280 was named "Ivan Khurs." The ship laid down in 2013 was launched in 2017, and already in June 2018 it was included in the fleet. 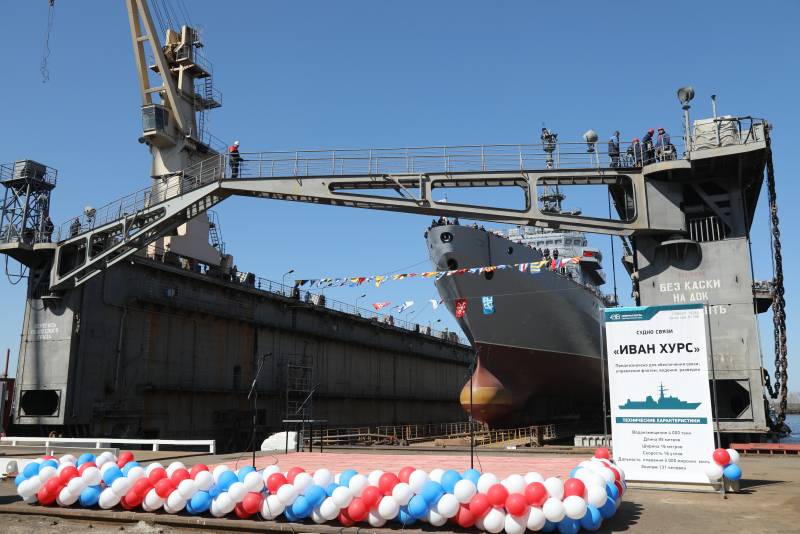 It is noteworthy that both ships of project 18280 were named after the sailors who made a significant contribution to the creation and development of military intelligence of the Navy of the Soviet Union. So Vice Admiral Ivan Khurs from 1979 to 1987 led the military intelligence of the Navy of the USSR. In total, it is planned to build up to four of these ships for the domestic fleet. Two more ships of project 18280 can be built before 2025.

Among the main tasks of reconnaissance, which can be solved with the help of ships of the project 18280, the following are distinguished:

- radio intelligence, which allows to determine the type, affiliation and characteristics of the detected sources of radio emission;
- surveillance of the components of the US sea-based missile defense system;
- radio interception of radio broadcasts at all frequencies;
- identification and systematization of sources of various electromagnetic radiation;
- compilation of electromagnetic and acoustic profiles of various surface ships and submarines;
- control of maritime communications;
- monitoring the actions of the probable enemy’s fleets, including during naval maneuvers and exercises. 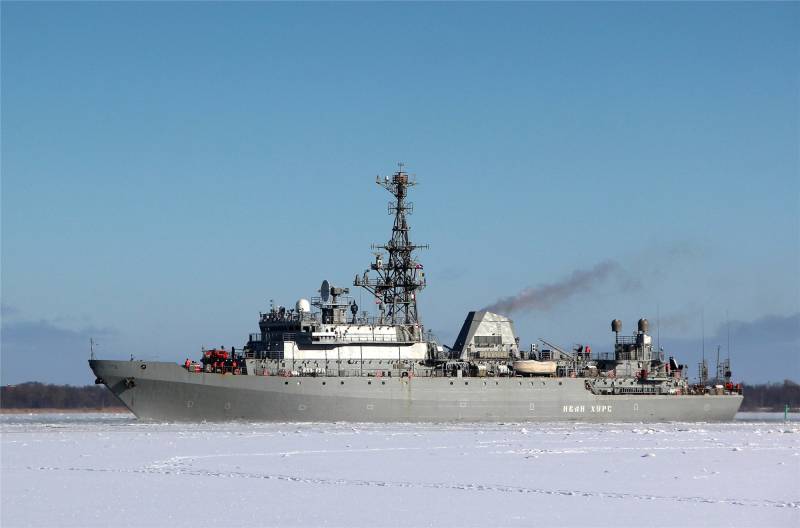 What is the reconnaissance ship "Ivan Hurs"

The main tasks of the ships of the project 18280 are to provide communications and fleet management, as well as solving special reconnaissance tasks. Ships are able to conduct modern reconnaissance and take an active part in electronic warfare. It is believed that one of the main tasks of such ships is to monitor the components of the US missile defense system (primarily marine), as well as anti-aircraft missile systems.

According to the assurances of the developers, in the ships of the project 18280 it was possible to significantly improve the operational characteristics of ship power, as well as the efficiency of use in comparison with similar ships of previous generations. On reconnaissance ships, automation of control processes for radio surveillance and communication systems was widely used, which made it possible to reduce the number of crew. Improved seaworthiness. In particular, to improve the maneuverability and controllability of the vessel, adjustable pitch propellers are installed on the ships of Project 18280.

According to the manufacturer, such ships are fundamentally new ships for the Russian fleet, significantly superior in their capabilities to ships of previous generations. The fact that the ships of project 18280 have better tactical and technical characteristics than ships of the Soviet era is beyond doubt, but many characteristics of the ships, including the composition and capabilities of the onboard equipment, are currently classified information. 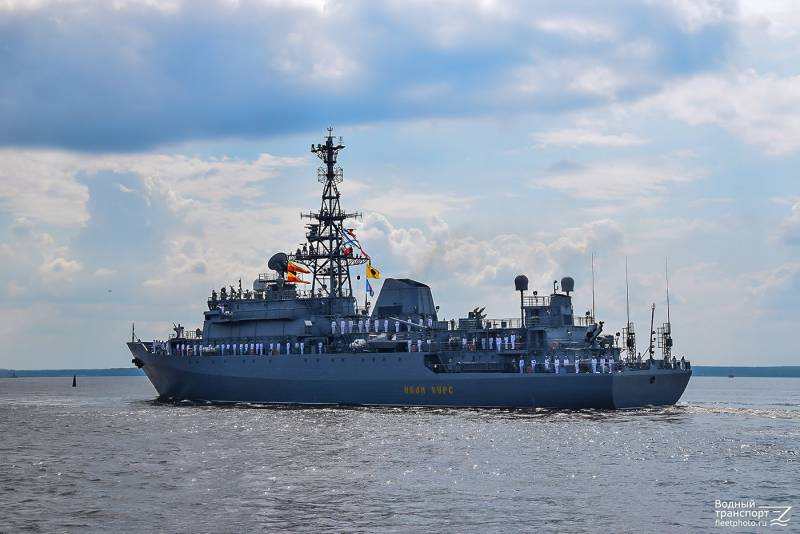 At the same time, the main technical characteristics of ships are well known. Project 18280 ships, which include the Ivan Khurs reconnaissance vessel, have a total displacement of 4000 tons. The ship is 95 meters long and 16 meters wide. The main power plant, developed by the specialists of the Kolomna plant, is installed on the ships. The ship’s power plant includes two modern 5DRA diesel-gear units built on the basis of the 8-cylinder diesel engine 11D42 8CHN30 / 38. The total capacity of the main power plant is 5500 hp. This is enough to provide the project 18280 ship with a speed of 16 knots (about 30 km / h). The cruising range of the ship is 8000 nautical miles (14 816 km). The crew of the ship is 131 people. All the data given is taken from the official website of the Severnaya Verf company, which built both ships of the series. It is worth noting that Soviet-built reconnaissance ships of the project 1826 differed in slightly larger dimensions - length 105 meters, total displacement 4550 tons.

The full composition and technical characteristics of the radio equipment on board are classified information. It is known that on board the ships of project 18280 the following were installed: navigation radar MR-231-3; the integrated bridge electronic system "Bridge 18280", which is responsible for positioning the ship, localization and orientation on the ground; the system of mutual information exchange "Subheading-23", which is responsible for the electronic compatibility of radar, detection and navigation stations. According to experts, the equipment placed on board the ship allows you to track signals of different power in different wavelengths.

The traditional armament of the ship is symbolic and is represented by a set of 14,5 mm heavy machine guns of Vladimirov (KPV) mounted on a special marine machine-gun mount (MTPU). In total, there are from two to four such installations on board the vessel, which can be used to combat surface and air targets, including lightly armored ones. The maximum aiming range for surface targets is 2000 meters, for air targets - 1500 meters. The ship’s crew also has Igla MANPADS or the more advanced Willow. 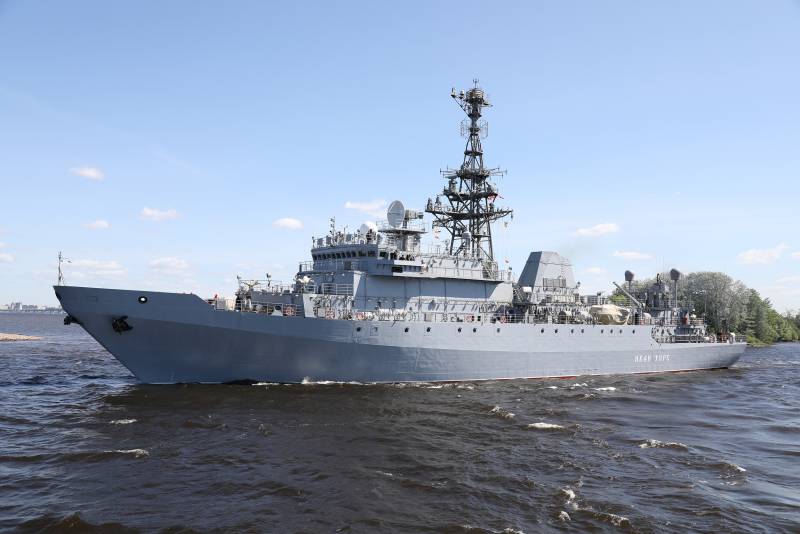 The crew of 131 people and the size of the vessel suggest a well-developed domestic infrastructure. On board, in addition to the crew’s cabins, medical unit and sanitary facilities, there is a large galley unit, designed to cater for more than 100 people. Only for cooking in the galley, approximately 30 items of various equipment are used: from standard ovens and cooking boilers to dough mixing units and flour sifters. Moreover, all equipment installed in the galley is of domestic production.

We are in Yandex Zen
Ilta Samonat (Finland): "18280 Project" is being tested in the Baltic - NATO missiles will not pass
"Svetlana". History of creation
11 comments
Information
Dear reader, to leave comments on the publication, you must to register.