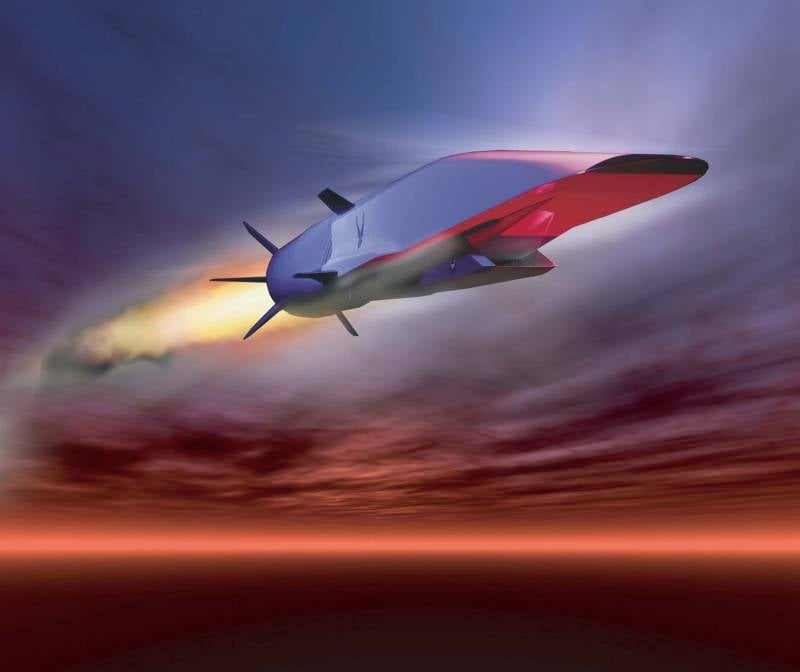 Words by Russian President Vladimir Putin that for the first time since the creation of the nuclear missile weapons our country has won a solid and unquestioned superiority in the field of creating the latest weapons, obviously, they are given a terrible pain in the hearts of the generals of the American military department.


The fact that Russia is not lagging behind the US, having to “catch up” with them, but setting the pace in this area for the whole world, frantically trying to acquire something like that, does not give them rest neither day nor night. Surely for this reason, from time to time, reports appear in the information space that the United States "is on the verge of creating hypersonic weapons", "has begun testing it" and is about to be able to "give a worthy rebuff to the intrigues of the Kremlin." How are things really?

This week, the United States military has pleased its fellow citizens with the news that its Office of Advanced Research Projects (DARPA) has signed a contract with Lockheed Martin to "conduct the third phase of the creation of a complex of hypersonic weapons." Apparently, in this case we are talking about a ground-based Operational Fires system designed for the ground forces, capable, according to the assurances of the military, "to act from positions that cannot be predicted." What is characteristic, the announced cost of the contract is about 32 million dollars. For Lockheed Martin, who usually devours budget money with the speed and ruthlessness of Australian forest fires, it is somehow not even solid. The point, obviously, is that this is, as mentioned above, the third stage. Probably, all that remains is to tint the casing and squeeze a couple of bolts ... Recall that the previous orders received by the corporation last year were just on the “hypersonic” topic, but in the air-based version: Hypersonic Conventional Strike Weapon (HCSW) and Air-Launched Rapid Response Weapon (ARRW) were calculated using completely different numbers. In total, this "pleasure" cost the American taxpayers one and a half billion dollars almost.

By the way, with the first of these ambitious programs, it seems that there was some kind of inconsistency. At the end of last year, the Pentagon announced the search for "having sufficient technical capabilities and qualified employees" contractors for testing, called Hypersonic Test Engineering, Mission Planning and Systems or HyTEMPS. What's the matter? Does the developers, Lockheed Martin themselves, have problems with the equipment or qualified personnel? Or did something go wrong and the project was transferred to someone else? Complete obscurity and mystery, covered in darkness. Although, perhaps, we are talking about another development altogether - for example, again, the land Common Hypersonic Glide Body (C-HGB). Above it, according to one of the Pentagon generals, experts from the national laboratory of the American Ministry of Energy are working tirelessly, not the creators of the F-35. On the other hand, tests on this project were announced no earlier than 2021. Again does not converge ...

Generally speaking, all these statements more than anything resemble persistent attempts to convince the American taxpayer that his hard-earned money, which regularly flows into the increasingly grandiose US military budgets, is used "to the fullest." The work is in full swing: specialists are working tirelessly, industrialists in four shifts “forge the hypersonic sword of the motherland”, and the brave warriors conduct tests one after another.

Regarding the tests, one can recall the bikes walking in the US media about the fate of the first model of hypersonic weapons developed in the USA, Falcon HTV-2. Its launch supposedly took place ten years ago and during this test the “miracle rocket” rushed into the stratosphere as much as 20 Machs! True, after that she rushed on - no one knew where ... An attempt made a year later was crowned with the same “success” - the test model did not last in the air for half an hour. After that, the project was curtailed as hopeless. It turns out that instead of hypersound in the USA there is still a hyperbluff. Another "Star Wars" on a different scale. Bluffing to the extreme - for the sake of allocating funds - as an option.

Most likely, the confession made at the end of last year by Pentagon chief Mark Esper regarding the fact that the real work to create “hypersound” was completely stopped by the United States several years ago and now they really have to catch up with Russia should be considered as close to the truth. At what pace and with what success is another question. Apparently, the words of Vladimir Putin that no country on the globe has hypersonic weapons, and even more of their intercontinental samples, are a bitter truth for the United States with which they will have to live for quite some time.