US strike deals with China on Siberian Power deal 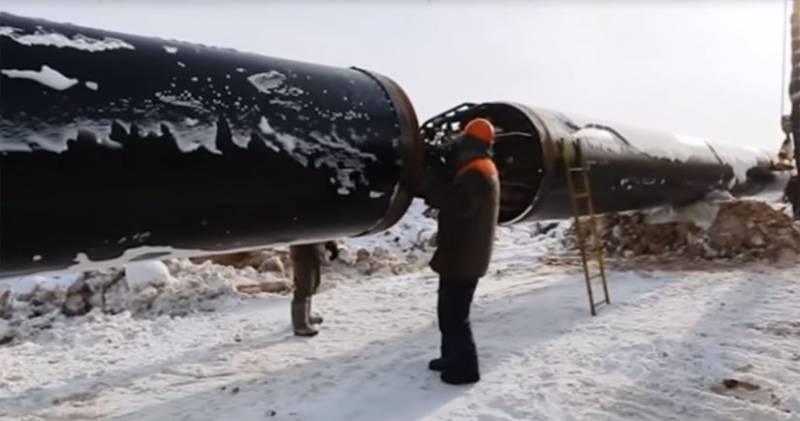 The launch of the Russian-Chinese Power of Siberia gas pipeline at the end of last year in a festive atmosphere initially provoked a somewhat mixed reaction in our country. A sufficiently large number of analysts spoke rather skeptically about the prospects for the payback of this far from cheap project, in which so far the political component clearly prevails over the economic one. And now they arrived news, forcing once again to think about whether the skeptics were right in this case.


While the whole world rejoices that Washington and Beijing have finally signed the first phase of the trade deal, Russia is fit to think. Yes, the fact that China and the USA have somewhat reduced the intensity of the confrontation, from which global markets have been feverish for more than a year and a half, is definitely good news - even oil has started to rise in price. However, there are nuances ...

One of the most important components of the agreement is the commitment of China to increase imports from the United States by $ 200 billion by 2021. So - more than a quarter of this huge amount (and specifically, 52.4 billion) falls on the purchase of energy! The specific “layout” of their types, of course, was not disclosed, but it is known for certain that the list will include not only coal, crude oil and oil products, but also liquefied natural gas. For comparison, based on plans announced at the official level, according to the contract signed by Gazprom with the Chinese CNPC, we are talking about the supply of 38 billion cubic meters of Russian “blue fuel” to the Celestial Empire per year. The total amount that is planned to be earned from this transaction in 30 years is 400 billion dollars. Feel the difference, as they say.

Of course, the Chinese energy market is huge, and growing every year. According to Gazprom’s management, China’s gas needs over the next decade and a half may well increase to 100 or more billion cubic meters per year. However, whether Beijing will increase consumption by increasing exports from Russia or whether it will continue to show loyalty to its main economic partner, the United States, is a big question. But in this case, the error can be extremely expensive. The construction of the second phase of the Power of Siberia gas pipeline was discussed back in 2018. It seems that the issue was even agreed upon at the level of personal negotiations between the leaders - Vladimir Putin and Xi Jinping. This means new investments by the Russian side, but will there be any sense in them? In the context of the “trade war” with Washington throughout 2019, Chinese imports of US energy were zero. And suddenly - such a breakthrough ... What will happen next? After all, the United States sees as its main task the ousting of Russia from any energy markets and is unlikely to cede to us China without a very serious battle. With their deal with the PRC, they actually strike a blow at the effectiveness of the “Power of Siberia”.

We should not forget about the desire of Beijing to achieve energy independence through the development of its own projects in this area. Recall: at the end of last year in the Middle Kingdom announced the creation of a national operator of oil and gas pipelines. This innovation consists in combining the pipeline networks of three large state-owned operators - China National Petroleum Corp. (CNPC), Sinopec Group and China National Offshore Oil Corp. into one company led by Zhang Wei, who had previously led CNPC. According to the corresponding official statement, this reform should, among other things, “contribute to the expansion of gas supply and the intensification of prospecting and exploration work” aimed at opening new energy fields in China itself.

No one, of course, says that we should not cooperate with Beijing in the energy sector. Still worth it! In any case, the diversification of domestic exports, so far “deployed” strictly to the West, is a positive moment. However, at the same time, Russia needs to clearly understand and firmly remember that China will always and everywhere act in pursuit of its own interests, both economic and geopolitical. It would be time for Russia to learn how to act in this way.

We are in Yandex Zen
Situational analysis of the death of the MH17 flight (Malaysian Boeing 777), made on the basis of engineering analysis from 15.08.2014
Results of the week. “In our cooperative, the board is always agreed”
118 comments
Information
Dear reader, to leave comments on the publication, you must to register.