Barrel around the corner. Shooting technology that scares Americans 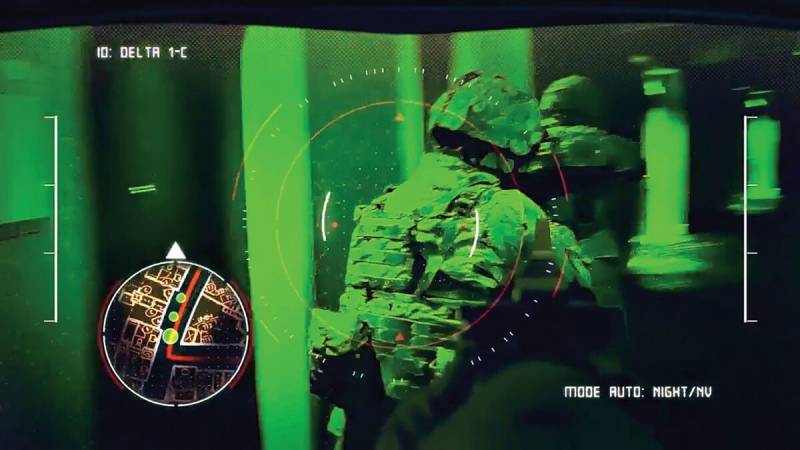 A long time ago weapon, allowing you to shoot from behind cover and at the same time not expose yourself to enemy bullets, it was considered almost shameful. It was a shame to use nozzles and crooked trunks to shoot the enemy with impunity. However, over time, an understanding of the absurdity of the term "dishonest weapon" came and almost all arms companies offered their solutions to this issue. And at the end of World War I, the American Albert Pratt offered an absurd pistol helmet. 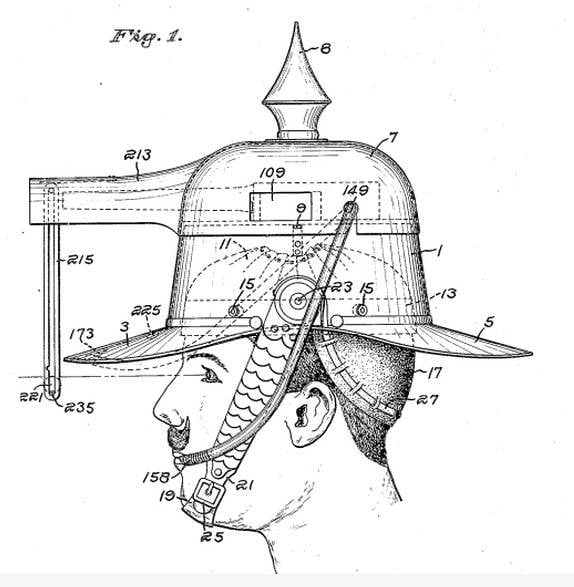 Albert Pratt Helmet Gun Patent
The humor of this melee device consisted in the method of firing: the owner of this miracle helmet had to blow the tube with force in order to fill the pear pulling the trigger. How much time passed before the shooter detected the target and opened fire, история is silent. A classic of such weapons technology, of course, is considered a crooked barrel. During the Second World War, the Germans used the Krummerlauf rifle attachment, which, however, did not allow aimed fire and seriously impaired the ballistic properties of the bullet. 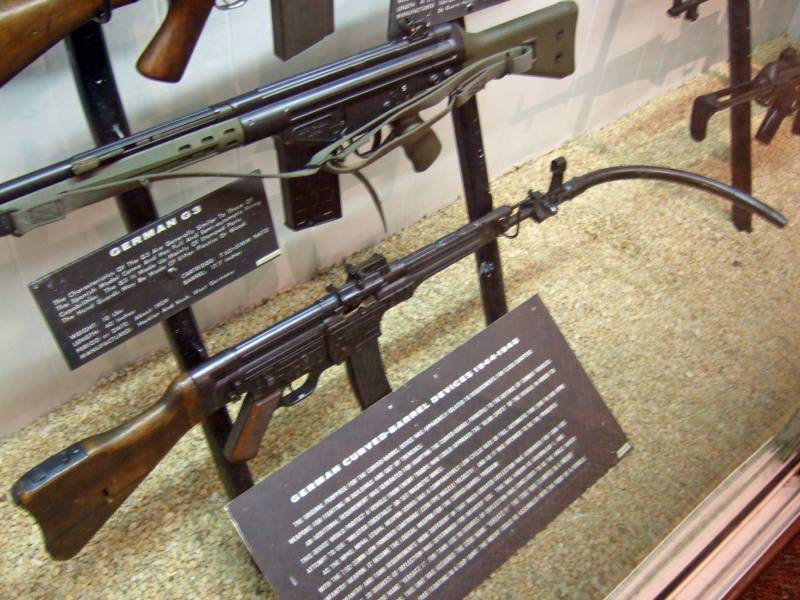 German StG44 with Krummerlauf
There were also trench rifles with a system of periscopes, which already made it possible to aim fire from cover. The TRAP T2 (Telepresent Rapid Aiming Platform) program from 1998 became an extreme manifestation of the desire to protect the fighter from the enemy bullet at all costs. This mechanic is designed for the most expensive soldier on the battlefield - the sniper. In fact, TRAP T2 is a stationary remote-controlled robot with a rifle, wirelessly connected to the operator. At the same time, the sniper shooter need not be afraid of suppressing the firing point even with the help of tank weapons, since the technique allows the operator to be removed 100 meters from the weapon. But the weight, high cost and low mobility did not allow the TRAP T2 to become a mass weapon. 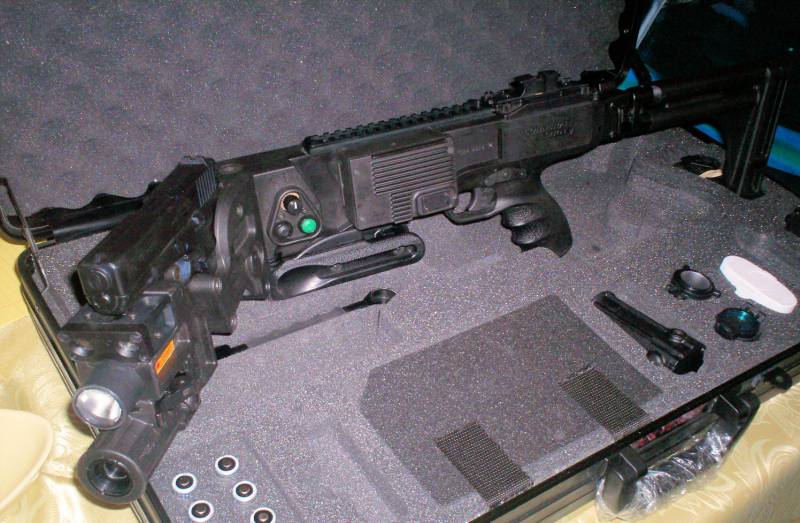 Corner shot
But weapons for special forces Corner Shot adopted by many countries. This flailing pistol (rifle, 40-mm grenade launcher) with a video camera performs its main function well - conducting aimed fire in tight spaces from around the corner during assault operations. But in ordinary life, it is excessively bulky and expensive.

The closest to the most optimal concept of safe shooting from around the corner were the French with the FELIN complex. A rather bulky infrared sight is mounted on the FAMAS F1 rifle, the FN Minimi light machine gun or the FR-F2 sniper rifle, equipped with an interface with an IEEE 1394 standard port for communication with the helmet-mounted OVD surveillance device. However, the clarity of the picture and the resolution of the display leave much to be desired. 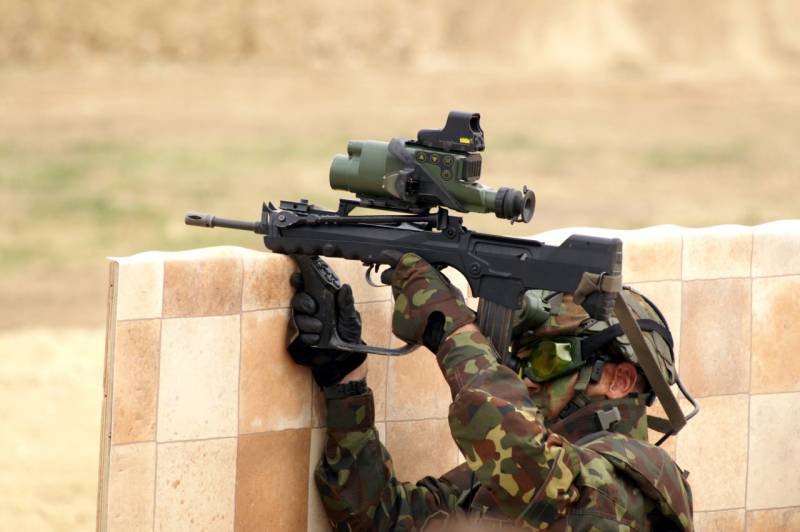 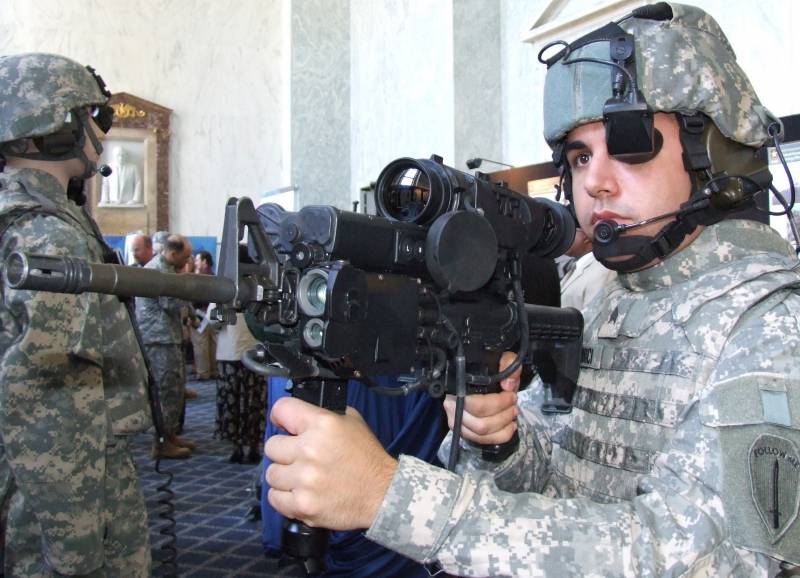 Land Warrior
In the 2000s, the United States implemented a similar project, Land Warrior, which laid down the possibility of broadcasting video from sight to helmet-mounted displays. In the first versions of such a system of wires, there were so many that it was sometimes easier for a fighter to completely leave the battle. Also, the excess weight and cost of the entire set made the project move to a sluggish state, although the Yankees are still actively testing it in Iraq and Afghanistan.

The American Rapid Target Acquisition (RTA) program from PEO Soldier, BAE Systems and DRS Technologies has incorporated the very best of the world of military high-tech firing techniques: compactness, low weight, energy efficiency and a high price (about $ 18000). The fighter is equipped with the latest generation AN / PSQ-20 helmet-mounted mono or binocular night vision binoculars, connected wirelessly to the FWS-I thermal imaging sight on the M16, M4 or M249. 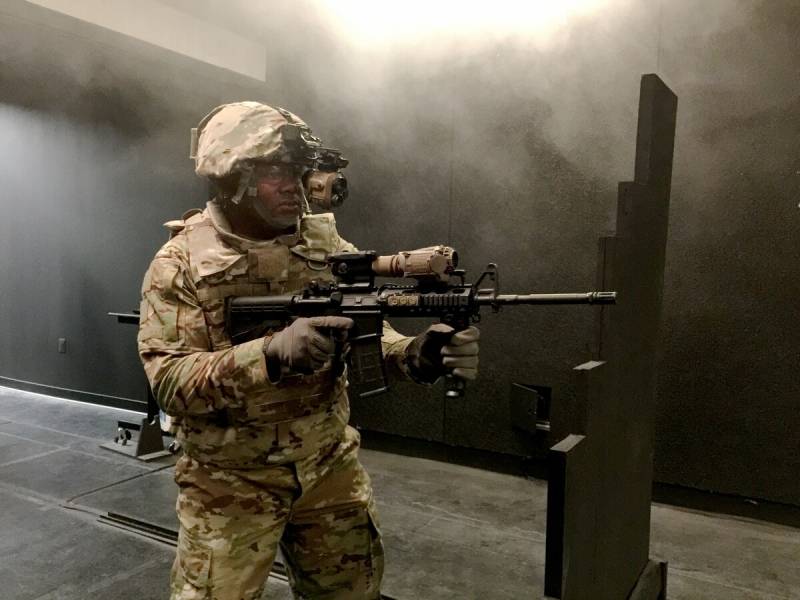 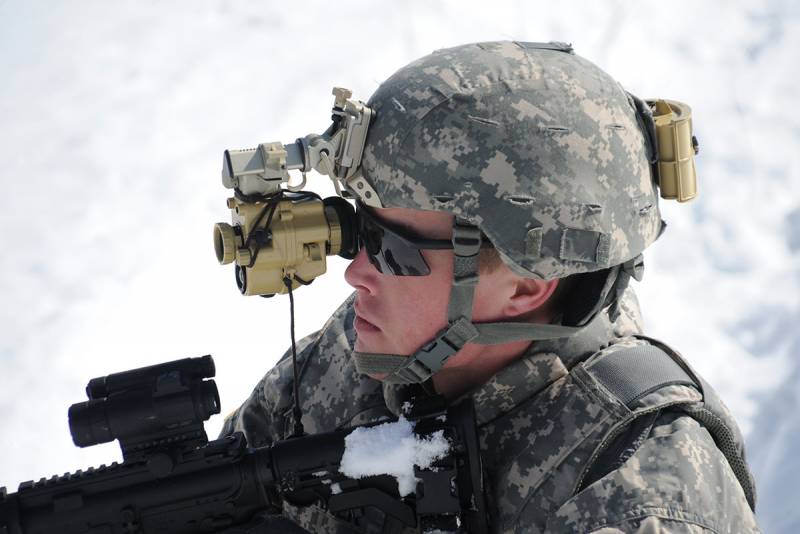 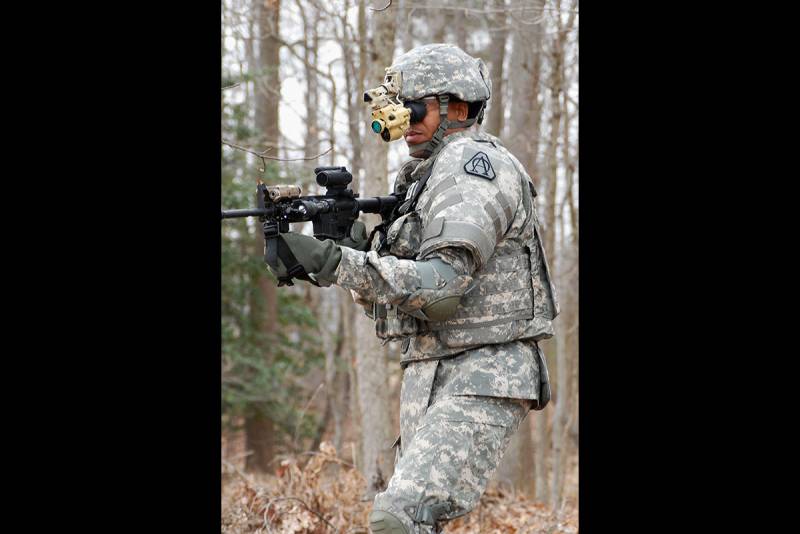 Complex developed as part of the Rapid Target Acquisition project
The equipment is quite compact and in the case of mass use will seriously change the picture of hostilities. Strictly speaking, it cannot be called a full-fledged firing system due to shelter. The Israeli Corner Shot will be more effective, since it completely isolates the fighter's limbs from fire from around the corner. In RTA, hands in some angles still stick out due to cover along with a rifle. But the American system has one undeniable advantage - versatility. During testing at the training ground, most of the fighters were able not only to hide from the shelter without raising their heads, to hit most of the targets presented, but also learned to conduct aimed single fire without putting weapons on their shoulders. This allows you to make a thermal imager in front of the eyes with a contrasting aiming mark. The RTA system simultaneously provides a 40-degree viewer of the surrounding reality, as well as an 18-degree visual field from the sight of a weapon.

Actually, what does this lead to? If the same fighters without RTA conditionally hit 17 out of 40 targets, and with RTA 34 out of 40, then this definitely reduces the requirements for the level of possession of weapons. A decrease in the skill of the shooter inevitably leads to a decrease in responsibility. From a professional of high standard, he turns into the operator of another gadget that can easily kill. In addition, the conduct of automatic firing without emphasis on the shoulder threatens with a sharp decrease in firing accuracy due to uncontrolled recoil. Moreover, in such cases, the accuracy of shooting disappears as a concept: bullets can fly anywhere and hit their own or civilians. The Americans seriously fear that adopting such systems will not allow the formation of stable skills in the recruits with a mark and safe shooting. 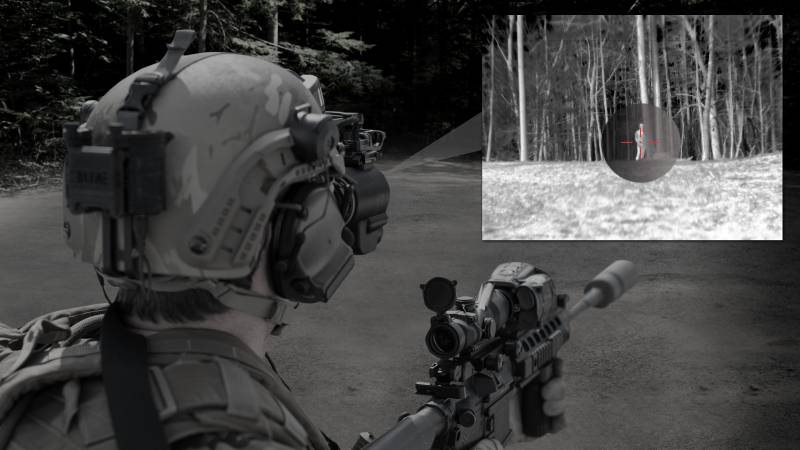 The second major problem is the combination of infrared and thermal imaging channels on ENVG-B displays. In some operating modes, the fighter does not see the person, but only his outlines of red color. This, by the way, is implemented in the Rapid Target Acquisition around the clock: fighters look at the world during the day through a thermal imager / night vision device. How to determine that in front of you is an armed person? It is not visible what is in his hands (of course, if it is not a machine gun or a grenade launcher) and what kind of clothes he is wearing. But even if the target is identified as a combatant, where is the guarantee that this is not your own? At the same time, the RTA system allows you to "see" through thin walls, doors, fog, snowfall or heavy rain. All this seriously increases the risks of shooting someone from fellow soldiers. 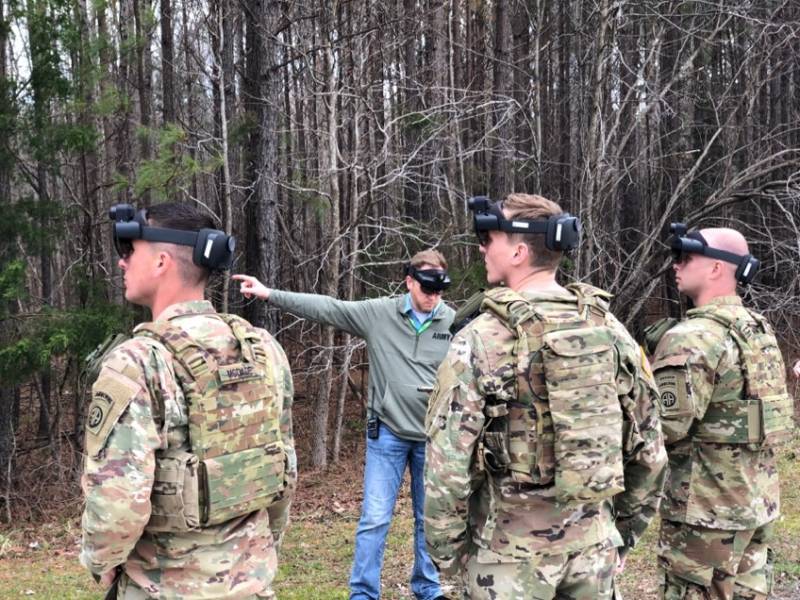 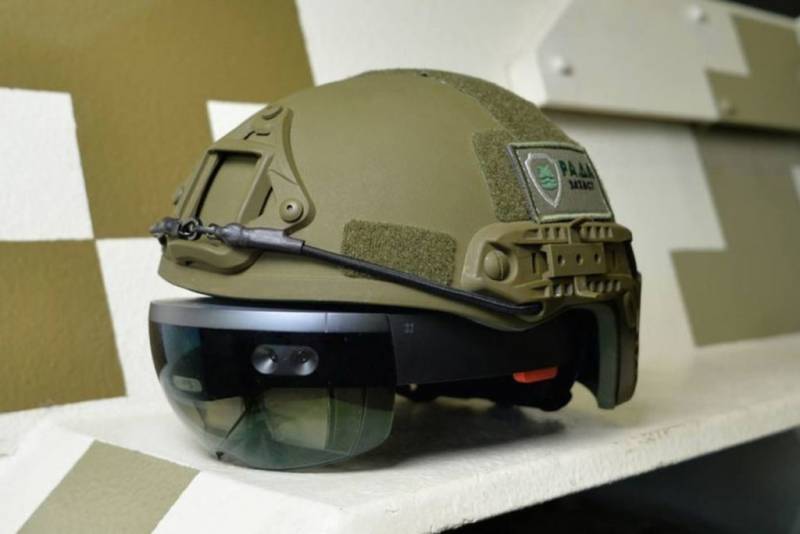 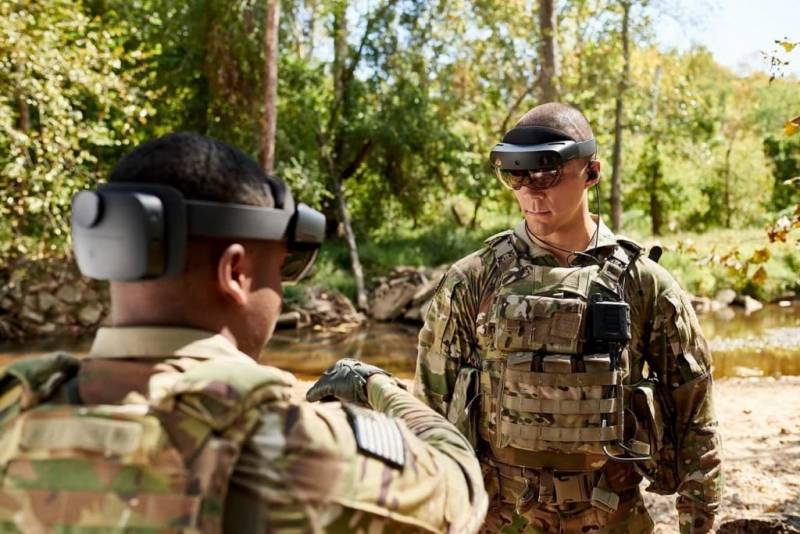 U.S. Army VR Prototype Testing
But it seems that this does not particularly concern the leadership of the US Army. In 2021, it intends to announce operable devices for the Integrated Visual Augmentation System (IVAS) project, which Microsoft has been working with since 2018. These are virtual reality glasses such as Google Glass or HoloLens, which will display on the transparent matrix everything that is most important for the fighter at the moment: maps, a thermal imaging picture of the surrounding area, a video sequence with mini-drones and, most importantly, highlight enemy targets. How this will be applied to people is not clear. There is an assumption that a fighter with IVAS will simply and thoughtlessly execute orders to defeat the goals specified by the system, without bearing any responsibility for this. What is not a cyborg killer from science fiction films?