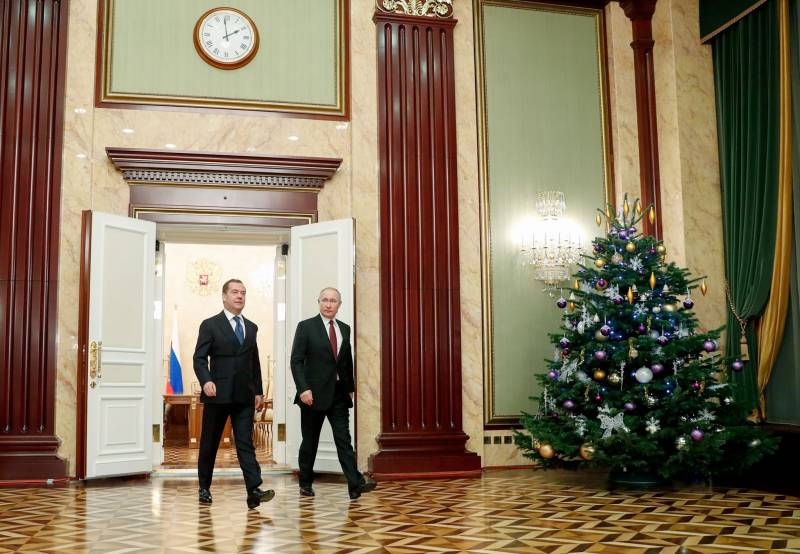 The resignation of Dmitry Medvedev’s government excited society more than the program message from President Vladimir Putin to the Federal Assembly. Russia has been waiting for this resignation for a long time, perhaps, since December 2013, when it became clear that the Medvedev team was not coping with the tasks that were required of it to lift the country.

By January 2014, the elite was already considering the post of prime minister as vacant. Rumors spread around the country that Dmitry Medvedev would be replaced immediately after the Sochi Olympics. But here Maidan happened in Kiev, then - reunion with Crimea, the conflict in the Donbass, sanctions ...

The tone of the rhetoric of the authorities has changed: they say, "horses at the crossing do not change." Although the "horse" was so-so. The government, for example, completely failed to implement the May 2012 decrees, from which Putin and the country were waiting for an upswing in many areas of public life and the economy.

However, the cabinet of ministers of Medvedev dealt the biggest blow to small and medium-sized businesses. For some reason, the liberal economic bloc of the government decided that it was large, budget-forming companies that needed preferences. So, they say, they can be pulled up to the level of transnational corporations.

Small businesses were crushed by taxes and draconian loan rates. Almost simultaneously, over half a million small enterprises and firms closed in the country. The country's GDP has rolled down. At the same time, the contribution to the consolidated budget from the income tax of citizens and taxes included in the cost of consumer goods began to grow. This was tried by the head of the Federal Tax Service, Mikhail Mishustin, who organized effective tax administration, which is now set as an example to the whole world.

A paradoxical situation happened: the Mishustin department collected taxes as a percentage much more than the country's economy grew. Meanwhile, the funds that had fallen into the treasury were hanging on ministerial accounts for many months. Departments could not provide them with timely documentary support to the economy and regional budgets.

With this baggage of negativity, Dmitry Medvedev’s cabinet lasted the entire third cadence of Vladimir Putin. In May 2018, the country reasonably expected changes. But inept officials habitually settled in long-established offices.

Only a year and a half after the fourth inauguration of Vladimir Putin, when it became clear that Dmitry Medvedev was failing promising national projects with his ministers and was unable to cope with operational issues (at least to eliminate the floods in the Far East), did the president dismiss the country's unpopular cabinet ministers.

Does the tandem go down in history?

The endorsement of this correct action by Vladimir Putin was replaced by bewilderment when he announced that the post of deputy chairman of the country's Security Council was being created specifically for Medvedev. Strictly speaking, this is a purely presidential structure (Security Council chairman - Putin), in which in their entirety the powers of the highest official of the state are combined. Simple logic suggests that Dmitry Medvedev now has a status that has risen to the level of vice president. Or is this a position for the sake of a post - for our officials are not able to go “far” after resignations.

I recalled the old Soviet practice, when a person who fell into the nomenclature became "unsinkable", despite all the failures and failures. I did not cope with the work of the director of a shoe factory - they transferred to a furniture factory, then to a poultry farm, etc. Instead of sending a person to ordinary work in accordance with his professional diploma. So nomenclature lack of courage could circulate for years in leadership positions, causing damage and harm to a variety of teams.

Something similar is happening in personnel practice today. In 2012, the rates of assistants and advisers were introduced specifically for not very successful ministers in the presidential administration. The names of these persons are known to the country. Less well-known are the benefits of their current employment.

You can also recall the scandalous ex-Minister of Defense Anatoly Serdyukov or his brother from the sports department Vitaly Mutko. Mutko was raised to the level of Deputy Prime Minister for Construction and Regional Development. Putin justified this appointment as an outstanding organizational ability of an official.

This autumn, the president’s recommendation fell to dust in the vast expanses of Siberia and the Far East, where Mutko, politely speaking, could not cope with his high responsibilities. As we know, the government (in this case, represented by Vitaliy Mutko) did not completely solve the problems of people affected by the floods in the Irkutsk region.

I do not think that someone is thirsty for "blood" and is ready to poison the "disgraced" officials to stupor. For the most part, we are people of Orthodox culture. Compassion for the fallen is clear and close to us. However, I want this compassion not to become forgiveness, and the choice between the good of the disgraced official and the country would still be in the country's favor. She deserved it. Including, and for eight years of Dmitry Medvedev's premiership.

On the one hand, it seems to be clear that there will be no previous “tandem”, that he is leaving for history. But on the other hand, given the described "unsinkability", who knows what to expect in the future with such manual control. So far, it turns out that the tandem is tired, the tandem has gone ... far, for how long ... Constitutional changes and a new version of the formation of the government after their adoption will give an answer to this question.