Isaac Salzman. The ambiguous fate of the "tank king" of the Soviet Union 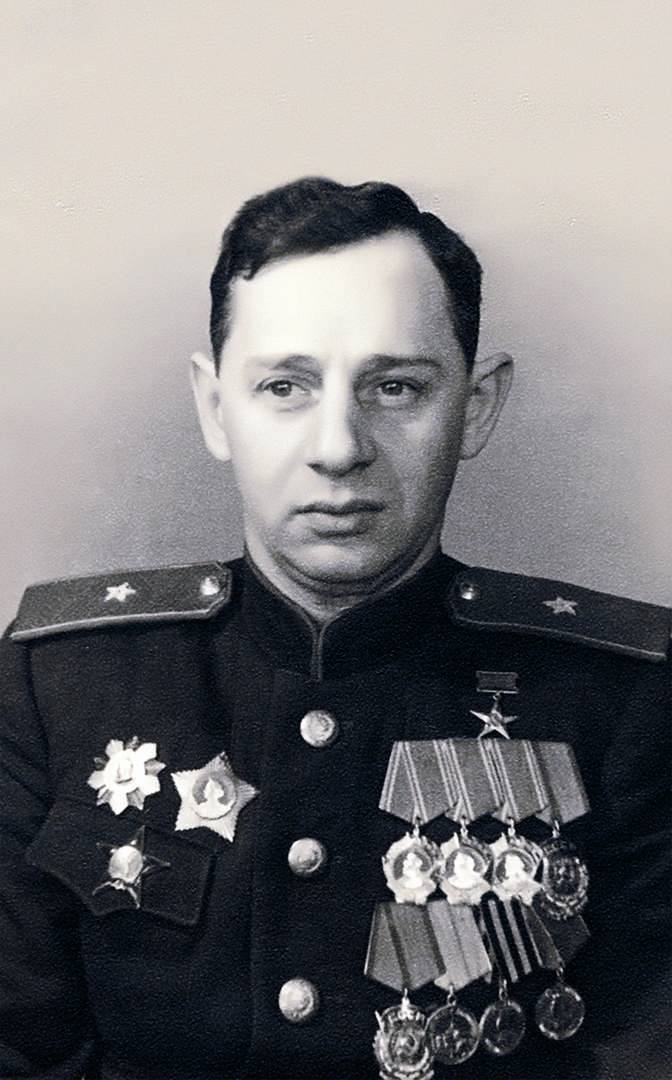 Myths about the king

In previous articles of the cycle about Chelyabinsk "Tankograd" there were already references to Isaac Moiseevich Salzman, but the magnitude of this extraordinary personality requires a separate consideration.

To begin with, there is still no unambiguous assessment of the role of the “tank king” in the emergency development of the production of armored vehicles at the evacuated Ural plant. In the previously mentioned book by Nikita Melnikov “Tank USSR industry during the years of World War II ”Zaltsman looks like a cruel and not always competent manager who almost harmed the organization of tank production. So, on October 13, 1941, Isaac Zaltsman, as deputy commissar of the tank industry, arrived in Uralmash in order to identify the reasons for the failure to fulfill plans for September. While examining the enterprise’s workshop (in particular, workshop No. 29), the deputy commissar saw the Texler imported front-grinding sander in the corner. This expensive equipment was used to process the towers of the KV heavy tanks at the Izhora plant. However, in the Urals, they worked with towers the old fashioned way on longitudinally milling and boring machines - for some reason, the use of Texler turned out to be low-tech. The head of workshop No. 29 responded with a refusal to Zaltsman’s demand to immediately include Texler - this would violate the existing production chain and slow down the assembly of tanks even more. However, the head of workshop No. 29, I. S. Mitsengendler, for his intransigence, at the insistence of Zaltsman, was fired and arrested on the same day. Surprisingly, the understanding that they had nearly buried such an important specialist came relatively quickly - in January 1942, Mitsengendler was returned to the department of the chief technologist of the workshop, and later he again took the place of the head of workshop No. 29. 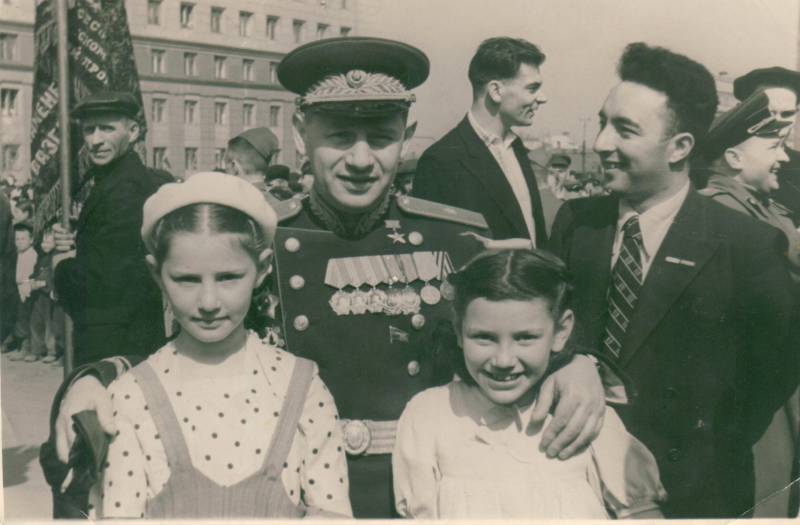 In general, in those terrible times, the position of director of a defense plant could sometimes be deadly. On October 24, 1941, Isaac Zaltsman continued his inspection already at the Ural Turbine Plant, which was not able to collect at least 5 V-2 tank diesels for the whole of September. It was not possible to assemble motors even from billets arrived from Kharkov. As a result, Isaac Zaltsman decided in an order to dismiss Director Lisin, put him on trial and evict from a departmental apartment. Lisin was lucky then - he lost his post, but remained at large, and in 1943 he became director of a new defense plant in Sverdlovsk. The strangest thing is that the removal of the director and the appointment of the former head of the Kharkov plant, D. E. Kochetkov, did not particularly improve the situation with V-2 engines at Uralturbozavod. This was often not the fault of the plant itself - Uralmash did not supply up to 90% of the necessary raw materials, and, in turn, the Zlaustovsky Metallurgical Plant did not send alloy steel in the required volumes. But Zaltsman’s decision in this regard was one - the director was to blame as the person responsible for everything, including other plants. 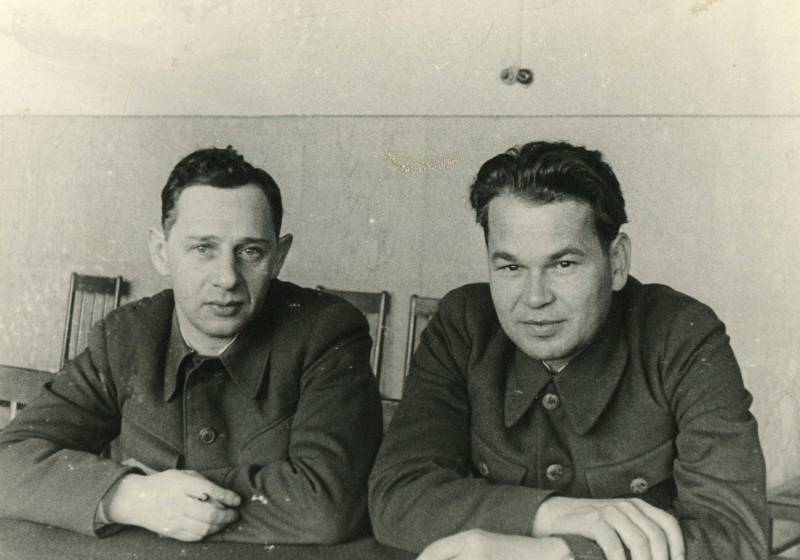 I.M. Zaltsman, People’s Commissar of Tank Industry of the Chelyabinsk Region and L.S. Baranov, 2nd Secretary of the Chelyabinsk Regional Committee of the CPSU (B.) 1943
The opposite point of view on the character of Isaac Zaltsman can be found in Lennar Samuelson's book “Tankograd: Secrets of the Russian Rear 1917-1953”. Here he is described as a talented manager who managed to reorganize the evacuation and operation of the Kirov plant in Leningrad in such a way that the company successfully produced tanks literally under German bombing.

In other sources, in particular, in the works of Alexei Fedorov, assistant professor of Chelyabinsk State University, Zaltsman again appears not in the best light. The official point of view is refuted, according to which the post-war disgrace of the Hero of Socialist Labor is associated with his unwillingness to slander the leadership of Leningrad (the famous "Leningrad affair"). Who was the famous “tank king” of the Urals?

Briefly about the biography of Isaac Mikhailovich. He was born in Ukraine in 1905 in the family of a Jewish tailor who managed to suffer from pogroms and died early. For some time, Zaltsman worked at a sugar factory, in 1928 joined the CPSU (b), five years later he graduated from the Odessa Industrial Institute. In 1938 he became director of the Kirov plant. Zaltsman's predecessor in this post was repressed. Incidentally, this fact was later adopted by ill-wishers, who accused the director of the plant of having risen in the wake of Stalin's purges. Well-wishers, on the other hand, said that in the People’s Commissariat of secondary engineering he was known as a “progressive, courageous and energetic man” and was in good standing with the leadership. Be that as it may, Zaltsman held out as the director of the plant until 1949 - he organized both his evacuation to Chelyabinsk and the creation of the legendary Tankograd. Zaltsman also launched the production of the T-34 at the Nizhny Tagil plant named after the Comintern, in the summer of 1942 he managed to master the production of the Victory tank in Chelyabinsk, and at the end of the war he oversaw the heavy IS program. In the official propaganda of wartime, the director of the Kirov factory turned out to be “the most prominent representative of the glorious galaxy of business engineers brought up by the Bolshevik party of Lenin and Stalin,” a talented tank builder, a brave innovator, order bearer, a friend of youth and a caring person. From the printed materials it followed that Zaltsman always strove for higher education, achieved the post of director with his own labor, and, together with other factory workers, was awarded for the production of new types of tanks, guns and tractors. Also, Chelyabinsk residents learned about Salzman that in the besieged Leningrad he “did not leave the factory day or night ...”; as a people's commissar, "did not break personal, operational communications with the Kirov factory"; for the development of the tank, the IS "returned to the factory", although it was rumored that this was due to its conflict with either L.P. Beria or V.A. Malyshev. The legendary director of Tankograd, the major general of the engineering and tank service and the Hero of Socialist Labor won the victory with three orders of Lenin, two of the Red Banner of Labor, orders of Suvorov and Kutuzov, and the Order of the Red Star. Perhaps the closest in influence to Zaltsman during the war was Nikolai Semenovich Patolichev, first secretary of the Chelyabinsk regional committee and the Chelyabinsk city committee. Patolichev and Zaltsman have developed constructive business relationships over the years of collaboration. Actually, they formed a fairly effective tandem, endowed with considerable power from the center of Patolichev was also authorized by the State Defense Committee. Both understood that Moscow's supportive attitude rests on the uninterrupted supply of tanks to the front. In any other case, no personal authority and experience would save them. 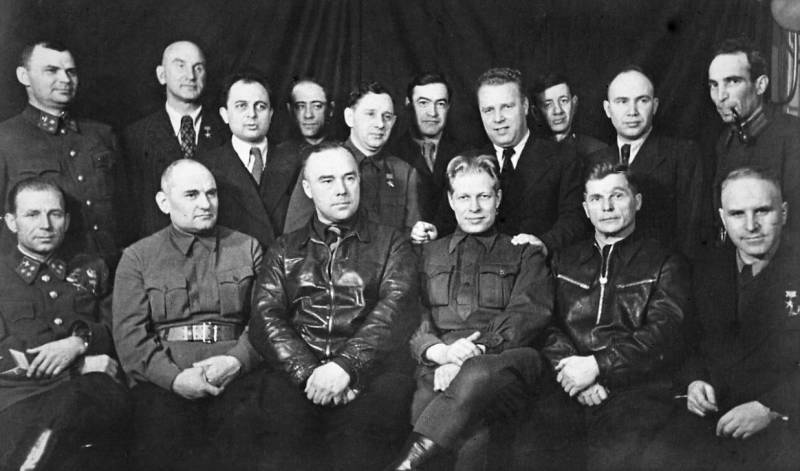 I.M. Zaltsman among prominent designers and engineers of the Great Patriotic War
Let's get back to the critics of the director. It is alleged that the quality of the armored vehicles manufactured at the Tankograd factories was sometimes appalling: the number of products increased due to the low level of assembly. And the relatively successful evacuation of the Kirov plant is due to a number of other directors and managers, but not to Zaltsman personally. The post-war dismissal of the director from all posts was not a mythical consequence of the Leningrad affair, but simple incompetence. Say, the legendary “tank king” could not organize the production of tractors, tanks and, what is very important, equipment for the nuclear industry that was emerging in the Urals in peacetime.

Among the workers of the Kirov plant, Salzman was known for his ambiguous character. In particular, there were stories about his "Odessa things", which we talked about at the beginning of this material. Zaltsman could with all demonstratively remove a person (director, shop manager) from his post, and then, after some time, tête-à-tête “forgave” the culprit and reinstated. The director of Tankograd easily decided on unexpected solutions to problems. Personally, he went in search of a party of tank radios that got stuck somewhere near Omsk in a private plane. And for the construction of pedestrian walkways to the entrance of the plant, he pointedly landed the managers responsible for this in a puddle and invited them to "slander" to the door. He also earned popular love by the case of a young factory worker who was standing barefoot at the machine tool - Zaltsman called the shop manager and forced him to give his boots to the boy. Dissatisfied with the director of "Tankograd" were outraged by meager food, lack of housing, difficulties with re-evacuation, but in wartime this, for obvious reasons, did not go outside. But in the early postwar years there were even open speeches against Zaltsman and his entourage. Letters were sent to Moscow stating that Zaltsman was "a capitalist, a skinner, an arrogant man who cares only about his well-being."

Since 1949, Zaltsman’s name has long been erased from official history, and in 1957 G. E. Nikolaeva’s novel “The Battle on the Road” was released, in which the negative hero, the director of the Valgan tractor factory, was much like the disgraced Hero of Socialist Labor. We learn about why this happened in the continuation of the story.

We are in Yandex Zen
Chernobyl notebook. Part of 3
Myths of the Great Patriotic. Papier mache helmet
53 comments
Information
Dear reader, to leave comments on the publication, you must to register.