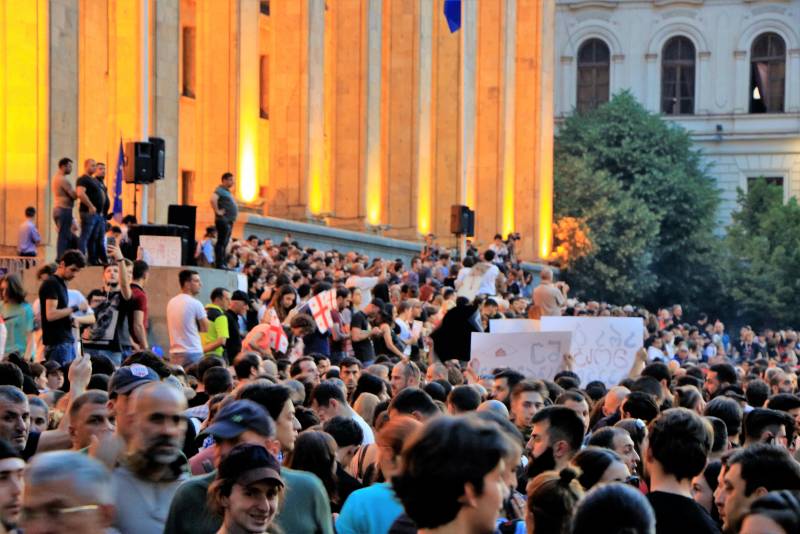 It seems that in Tbilisi, where until recently it was bitterly complaining about the much more expected economic damage from the loss of Russian tourists by the country, they still misunderstood something.


Extremist statements about the possible visit of Georgia by the Russian Foreign Minister have already marked one of the leaders of the party “European Georgia” Gigi Ugulava. This figure, as an institution, insists that the leg of Sergey Lavrov, who visited “without agreement with Tbilisi” Sukhum and Tskhinval, can in no way touch the Georgian land. Everyone who misses the Russian diplomat, who is a “violator of the law“ On Occupation ”, will become criminals themselves and will answer to the fullest extent! Recall - a possible punishment for those who break this, to put it mildly, peculiar legislative act can be not only a large fine, but even imprisonment for up to two years. Representatives of another Georgian party, whose "political platform" is absolutely clear from its name - from the "Unified National Platform", make similar provocative demarches.

On this occasion, I would like to note that one attempt to "put the Russians in their place" on a completely absurd and far-fetched occasion made by local "hot guys" trying to put together a political capitalist and make PR for outright Russophobia already cost Tbilisi extremely expensive. Anti-Russian covens, which only an absolutely blind and deaf person who shocked Tbilisi last June could take for “peaceful rallies” by the decree of the Russian president banning direct passenger flights with Georgia. Thus, a fat cross was put on the flow of domestic tourists to this country. For what, as they say, they fought, and ran into it.

Initially, official Tbilisi tried to invigorate, ranting at all angles that nothing terrible had actually happened. Just think, there are some vacationers from Russia there! Yes, we will do well without them! At the same time, usually, as the “incontrovertible arguments”, the calculations of some Western rating agencies, or even NGOs, were cited, assuring the Georgians that if they lost their compatriots in anti-Russian rudeness, then they were mere pennies. The reality turned out to be far from so rosy: in early autumn, Mariam Kvrivishvili, head of the Georgian National Tourism Administration, estimated the financial losses suffered by the country in July and August 2019 at 113 million dollars. Further more. The direct damage from lost profits was superimposed on inflation that broke the chain and all its attendant “charms” in the form of rising prices and the negative processes in the economy caused by them. The country's national monetary unit, the lari, once again threatenedly "staggered" ... In the end, as the head of the National Bank of the country, Koba Gvenetadze, was forced to admit, speaking to Georgian parliamentarians, the June “leaps”, rudeness of TV presenters and similar tricks cost treasury of at least $ 300 million.

Apparently, some Georgian politicians calling to meet with Sergei Lavrov as the next “mass protest rally against the Russian occupation” consider their country to be very rich. Well, if they are ready to ensure that its economy does not receive such amounts ... Moreover, they try to guess exactly by the beginning of the tourist season, which Georgia will not see at all this year if their ideas are put into practice. Well then, the master is the master. True, the more sane representatives of Tbilisi, such as the vice speaker of the parliament there, Grigory Volsky, are already trying to avoid the impending problems. They remind the "hot minds" that during the summit the capital of Georgia will symbolically fulfill the role of the "capital of the Council of Europe" and, accordingly, the street political demarches arranged at this time can go sideways with it not only in relations with Moscow.

Well, we’ll see that this time Georgia will prevail: common sense, backed up by elementary arithmetic, or still the desire for another cheap PR on Russophobian slogans.

We are in Yandex Zen
Russia and Georgia: traps from "well-wishers"
Good bye, genatsvale!
48 comments
Information
Dear reader, to leave comments on the publication, you must to register.