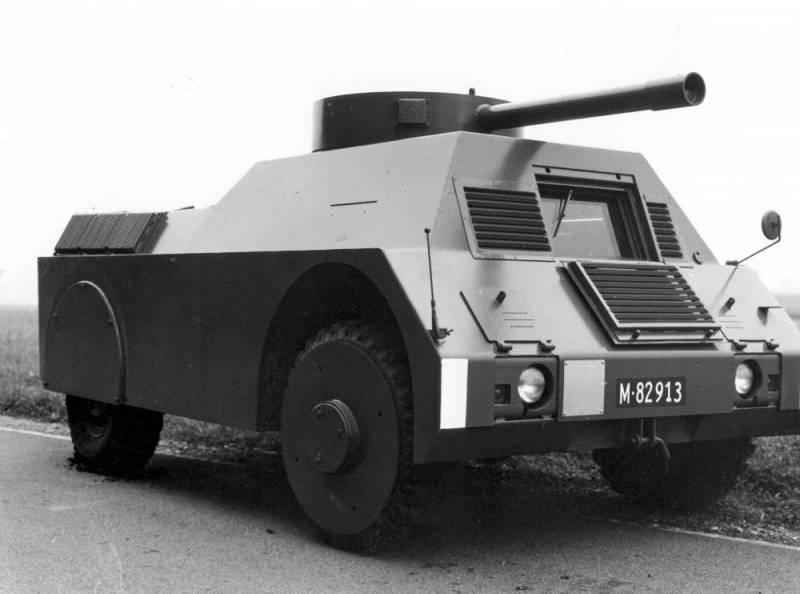 In the product catalog of the Swiss company MOWAG at different times there were various samples of armored vehicles of all main classes. Among them, the Panzerattrappe specialized armored training vehicle is of particular interest. With its help, it was possible to carry out training of crews, as well as to train infantry in the fight against armored vehicles.

From combat to training

In the early fifties, taking into account the requirements of the international market, MOWAG was developing new models of light wheeled armored vehicles. They planned to offer customers a whole line of machines with different characteristics and capabilities.

Together with other vehicles, an armored car was created on a promising all-wheel drive two-axle chassis T1 4x4. However, the fate of such a machine was determined quite quickly. A potential customer in the person of the Swiss army became interested in auxiliary equipment on the proposed chassis, but the armored car project did not suit him. The future of this car was in doubt. 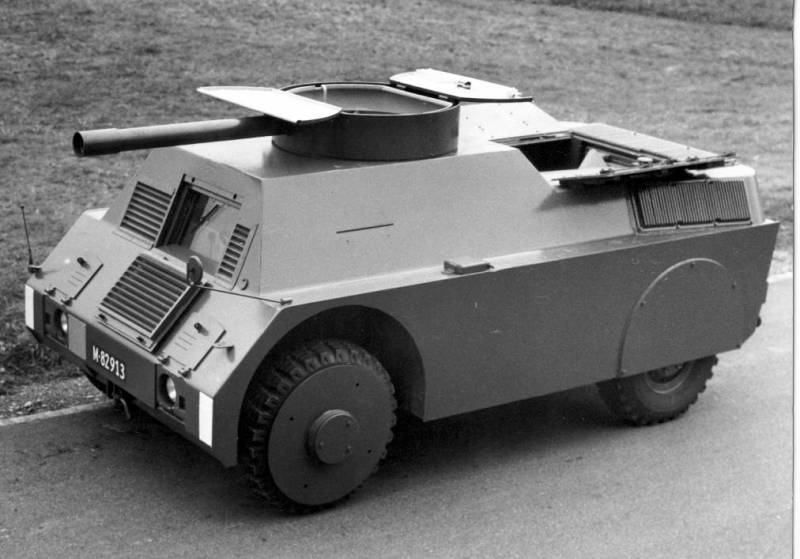 The same car, a view from a different angle. Photo Shusharmor.livejournal.com
Fortunately, MOWAG found a way out, and the project was not wasted. The existing armored car was significantly rebuilt and changed its purpose. Now it was proposed to use it not in battle, but in training crews and in training infantry. In this role, the armored vehicle interested the army and entered the service.

Initially, the MOWAG armored car was considered as a reconnaissance vehicle with machine gun or cannon armament, characterized by high maneuverability and a sufficient level of protection. Some of these features could be useful not only in battle, but also in training personnel.

According to the idea of ​​MOWAG, a training armored car called Panzerattrappe was supposed to maintain the existing bulletproof protection. It should be supplemented with some new elements of various kinds, while weapons were no longer required. 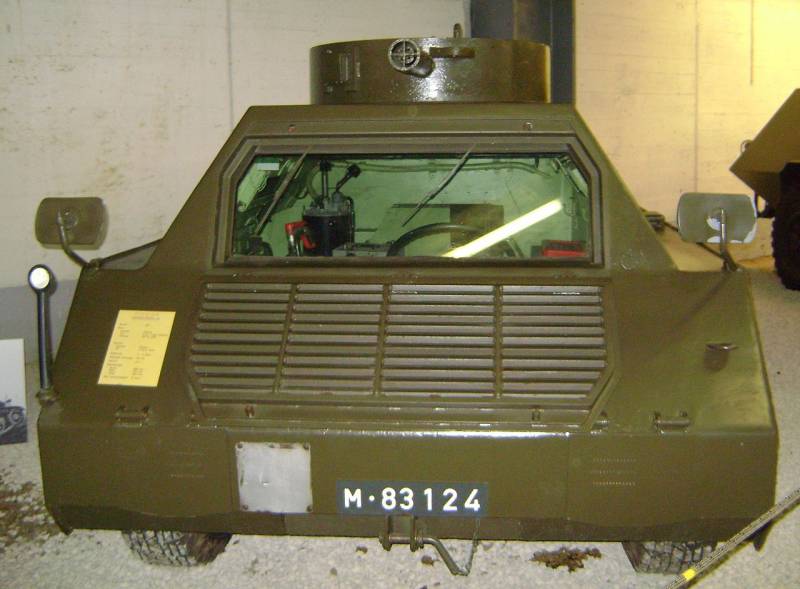 One of the surviving samples. You can consider the interior. Wikimedia Commons Photos
The finished armored car was suitable for the initial training of driver mechanics, shooters and commanders of armored vehicles. He could also perform the functions of a self-propelled moving target. In this case, infantrymen armed with a rifle could train on an armored car weapons and light anti-tank systems - naturally, with training ammunition.

The Panzerattrappe combat and then training armored car was built on the MOWAG T1 4x4 chassis. It was a universal chassis, suitable for mounting the necessary units for various purposes. So, the Swiss army bought seven different vehicles based on the T1. One of them was a training armored car.

The chassis was equipped with a 137 hp Dodge T103 gasoline engine. and a mechanical transmission providing four-wheel drive. There were four forward gears and one reverse gear. The necessary cabs / vans and special equipment were mounted on the chassis. 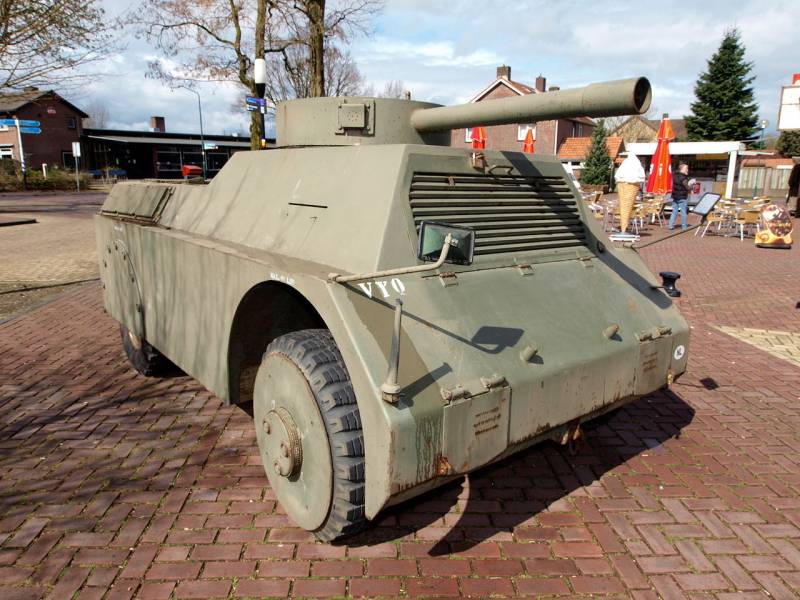 Target armored car in the museum of Overloon. Wikimedia Commons Photos
In the MOWAG Panzerattrappe project, the T1 chassis was equipped with a welded armored hull based on existing experience. The case was made of armor plates with a thickness of 10 mm and was supposed to provide protection against non-armor-piercing bullets and light fragments. Protection parameters were determined taking into account the characteristics of existing infantry weapons.

It is curious that when developing the hull, special attention was paid to protecting the side projection - it was precisely on it that the infantrymen were to shoot. However, other parts of the body had appropriate protection.

The hull was divided into a front inhabited compartment, characterized by a higher height, and aft engine compartment. The frontal leaf of the hull had an opening under the windshield. For additional protection, the glass was covered with blinds. As the project and production developed, the shape and dimensions of the glazing and the blinds changed. The view to the sides and back was provided with viewing slits. On top of the inhabited compartment was a tower with a gun simulator. 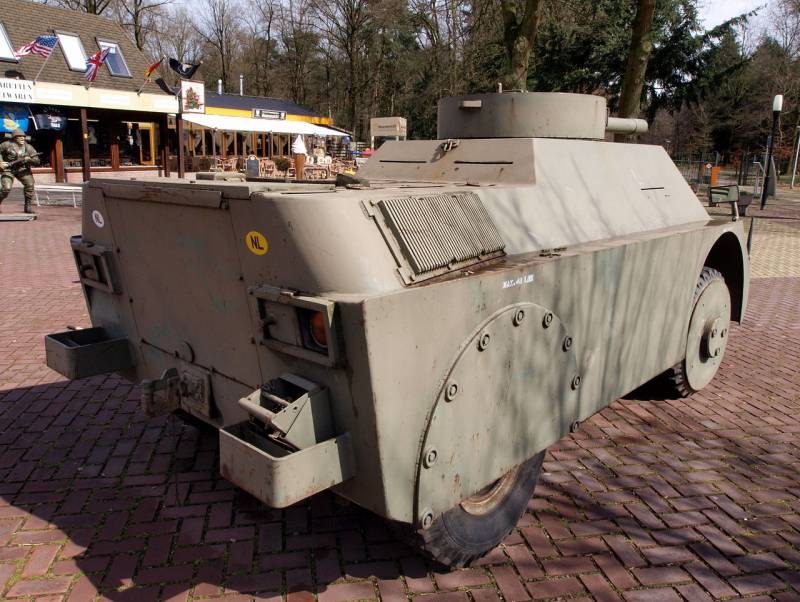 He is a view of the stern. Wikimedia Commons Photos
The chassis also received protection. The rear wheels were covered with armored covers. The front mounted their own shields, overlapping most of their lateral projection. The frame and main units were closed by the lower sections of the body armor.

The MOWAG Panzerattrappe armored car did not have its own weapons. The full-time crew included three people, one of whom served as an instructor. When performing individual work in the car could accommodate six people. For greater crew safety, the hull did not have side hatches, and access to the car was provided by a large hatch in the roof of the tower.

In 1953, the Swiss army ordered MOWAG to mass-produce new equipment based on the T1 4x4 wheeled chassis. The contract provided for the supply of seven different types of machines on a unified basis. The army wanted to get trucks, ambulances, training armored cars, etc. 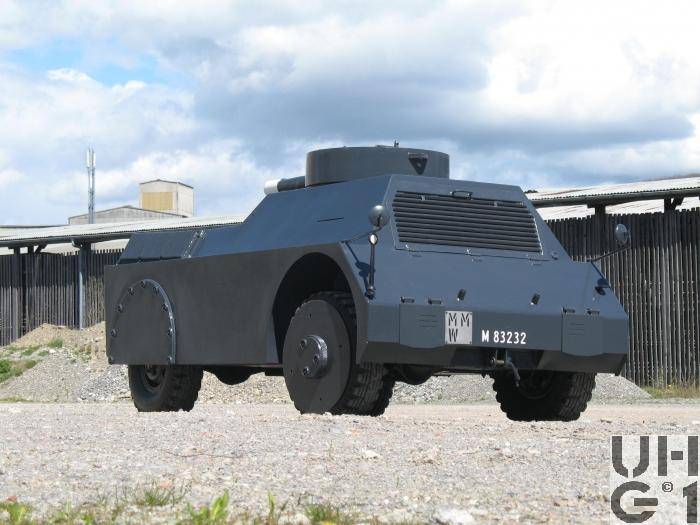 Armored car from the collection of the Militärmuseum Wildegg, Switzerland. Photo Militaerfahrzeuge.ch
The first MOWAG Panzerattrappe armored vehicles were built in 1953 and soon began to serve at the training grounds. Fast enough, they earned a reputation as successful machines for solving all the basic tasks of training personnel. Armored cars equally successfully coped with both driver training and work as targets.

Panzerattrappe production continued for several years, and during this time MOWAG built 240 units. They were distributed between different parts and polygons. Due to the special role, such armored cars were operated very actively, and therefore they had to be regularly repaired or even decommissioned and replaced with new ones. In the sixties, the group of self-propelled targets was “strengthened” with new Zielfahrzeug 68 vehicles based on tank. For a long time, armored cars and tanks worked together. 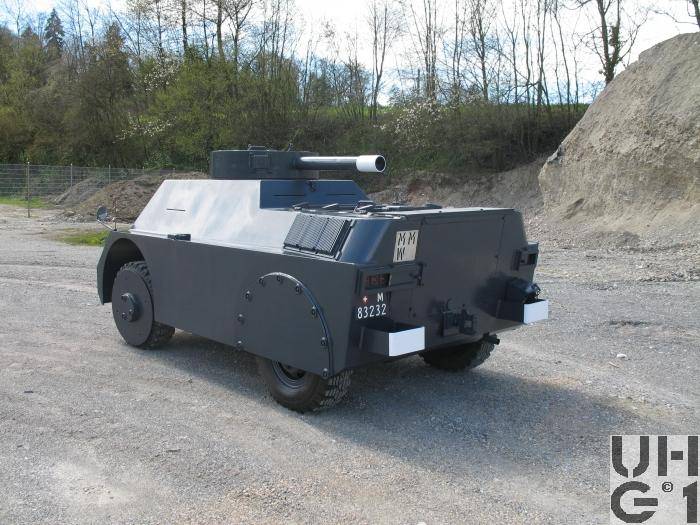 View of the stern. Photo Militaerfahrzeuge.ch
Morally and physically obsolete armored cars were decommissioned. Most of them went for disassembly, but several cars survived. In museums and private collections in Switzerland and other countries, there are about a dozen Panzerattrappe in different conditions. Some cars are still on the move, while others require restoration.

After abandoning the obsolete MOWAG Panzerattrappe, the Swiss army did not begin to order new such models. Now, as a “tactical object” for the training grounds, only decommissioned armored vehicles or special targets from the training complexes are used. The idea of ​​a specialized guided armored car was abandoned.

However, the original MOWAG project is of great interest. Not the most successful armored car, which the army refused, was turned into a special model with the required characteristics. Moreover, the training machine for many years successfully coped with its tasks and literally "survived" in the service of several military models of its era.

However, moral and physical obsolescence led to well-known results. The existing MOWAG Panzerattrappe were decommissioned, not being searched for a replacement.

We are in Yandex Zen
Piranha military wheeled vehicles strengthen their position in the global market
Light machines at a turning point (part of 2 from 3)
6 comments
Information
Dear reader, to leave comments on the publication, you must to register.