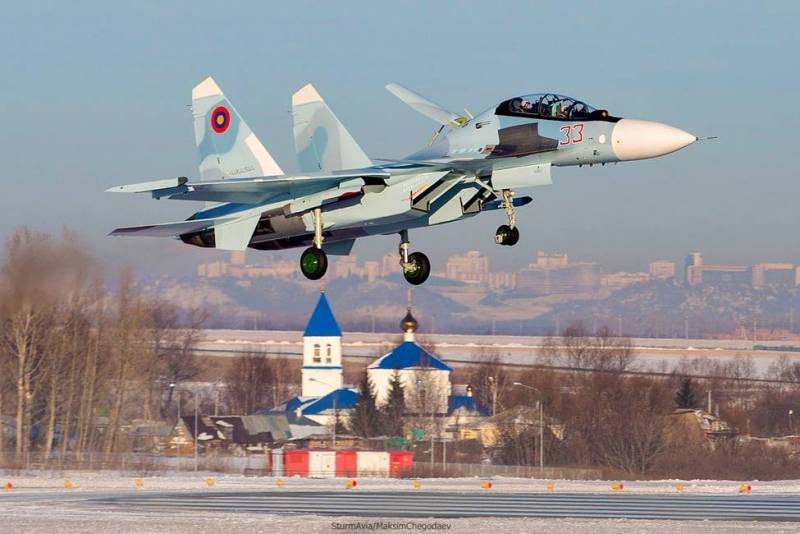 Recently, Armenian military experts have begun with a very high degree of certainty to assert that from now on their country can lay claim to almost complete and undivided dominance in the sky of the explosive Transcaucasus region that continues to remain explosive. At least - in relation to the similar capabilities of Azerbaijan, in which Yerevan continues to see the main military-political probable enemy. What exactly can we talk about in this case, and is that so?


First of all, about the supplies of Su-30SM multipurpose fighter jets that have already begun to this country, the first four of which landed at the Shirak airport in Gyumri at the end of last year. It is expected that Yerevan plans to purchase from 12 to 16 such combat vehicles. The importance there is attached to this deal is more than convincingly indicated by the presence at the reception ceremony of fighters arriving from Russia not only of the entire military leadership of Armenia, but also of its prime minister, Nikol Pashinyan. Despite the doubts put forward by some skeptics about the advisability of acquiring such expensive aircraft (although, as a member of the Collective Security Treaty Organization, Yerevan received them at an internal Russian cost, not at a market price), there is no limit to the enthusiasm of the Armenian military about this purchase. Still - after all, the Su-30SM was originally designed specifically to gain absolute dominance in the air, and this machine fully demonstrated its excellent combat qualities in Syria.

From now on, in Armenia they allow themselves to look down on Baku: they say that without obtaining consent in Moscow to purchase the same fighters, they did not find anything better than to choose as an alternative to them the JF-17 Thunder, manufactured under a Chinese license in Pakistan. Armenian experts in the field of armaments with great relish analyze the tactical and technical characteristics of both combat vehicles, according to which the Su-30SM, of course, bypasses the competitor in all respects. And the flight ceiling has almost one and a half thousand meters more, and the suspension points of the weapons are almost double against the "Pakistani Chinese", and there is no need to talk about the combat load - 8000 kg against 3600 for the JF-17 Thunder. It, however, is not surprising - this machine, unlike our formidable "master of the sky" was originally developed as a light fighter - and nothing more.

Anyway, all theories about the purchase of these aircraft by Azerbaijan so far can be considered exclusively as versions that are more or less likely. Yes, it seems that negotiations are underway. However, at what stage they are, about the supply of how many cars and in what specific time frame we can talk about - a secret covered in darkness. Today, Baku has exclusively Soviet models of combat aviation in the form of Su-25 attack aircraft and MiG-29 fighters. Also, of course, good cars (especially in skilled hands), but they are certainly not rivals to the Su-30SM.

To a considerable degree, the enthusiasm of those who in Armenia speak about the indisputable superiority achieved in the air is also a significant renewal and strengthening of their air defense systems by this country, due to, again, the latest products of the Russian military-industrial complex. First of all, it’s over, it’s necessary to mention the Tor-M2 air defense systems, which have also recently been put into service with the army there. In combination with Buk air defense systems previously acquired by Yerevan and, of course, S-300 systems, they, in the opinion of local military experts, make it possible to talk about creating a full-fledged and comprehensive air defense system of the country both at the distant, at the middle and near levels. Recent events in the Middle East have convincingly demonstrated the importance of this link in the defense of any state, so that the joy of the Armenian military is understandable.

But in Azerbaijan they doubt the superiority of Armenia in the air of Transcaucasia.

All this wave of enthusiasm is somewhat offset by the presence in Azerbaijan, again Russian, of S-300 systems, which are a serious argument for "sorting out the relations" of air defense systems, if that, God forbid, will happen (and some external forces would like to). Perhaps this factor of the Azerbaijani air defense is for the better - so that neither side of the joy of acquiring new types of weapons develops into a warlike itch and a desire to use them for their intended purpose. Nobody needs this for sure - neither in the Transcaucasus, nor in Russia.