“Russia will buy everything”: in Ukraine, the “battle” for land law is resuming 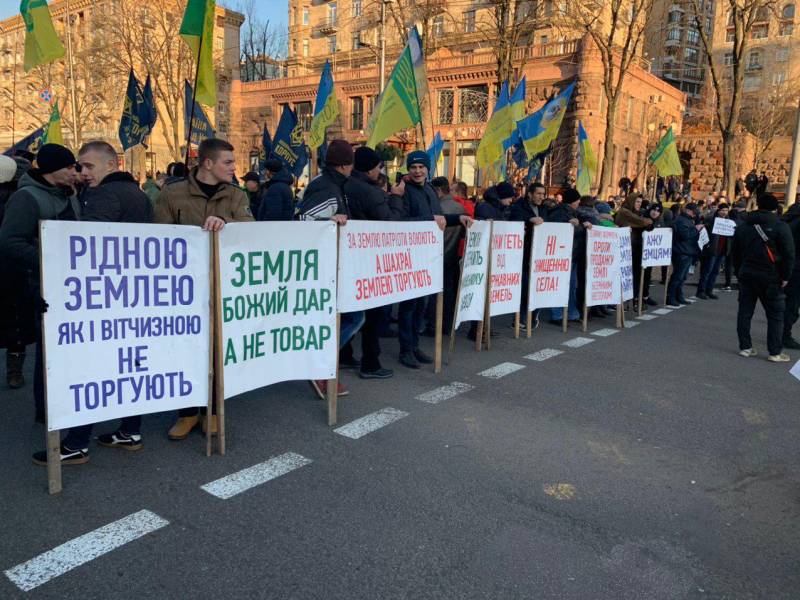 The deputies of the “unbundled” parliament have adopted a law on the opening of the agricultural land market, which the curators from the International Monetary Fund demand from Kiev, on the nose. There is reason to believe that it will be tabled for discussion at the next meeting of the Ukrainian parliament as "urgent." At the same time, starting January 14th, the Joint Headquarters for the Protection of Ukrainian Land announced the continuation of protests against the “anti-people’s decision to sell off the national treasure.”

In the current, absolutely surreal and pretty psychic clinic everyday life, the realities of Ukraine in order to reliably cajole any undertaking, they try to tie Russia to it one way or another with the words: "Russia will buy everything." If the case burns out - victory, count in your pocket. It is on the basis of this proven know-how that one of the main smokers of protest actions against the "land sellers" acts - radicals from the same "Freedom." They say that it is worth the deputies to vote “for” - the oligarchs from the “aggressor country” will flock in packs with full suitcases of money, and they’ll buy everything up to the last hectare. And there will be nowhere for the poor patriots, who have not yet left to work in Poland and other "Europeans", to go ...

A terrible prospect. Heartbreaking, I would say. But only in this case there is a typical shift from a sick head to a healthy, so beloved by the throaty and unscrupulous tribe of professional "patriots" in almost to the foundation of a destroyed country. It is precisely against any persons or companies participating in the purchase of Ukrainian black soil, at least somehow, albeit indirectly associated with Russia, the “fuses” in the bill are the most reliable ones. Starting from a direct ban on acquiring at least a couple of hundred to persons with Russian citizenship or enterprises having those among the founders to not allowing “persons from the sanctions lists” to offshore companies and companies whose ultimate beneficiary is impossible to establish. In preparation for adoption, the law in black and white means: to sell only to citizens of Ukraine and the firms they founded. So, there are no problems and all the violent protests with pigs in a coffin - a storm in a glass of water? Not certainly in that way.

Sober-minded Ukrainian experts note that the mass of loopholes that were invisible to the naked eye and several times rewritten to complete unrecognizability was left behind. And it is precisely because of them that the “non-fallowing” agrarians, especially small farmers and ordinary peasants, can really lose their land-nourishment. Moreover, all attempts to nod at the “Moscow hand” in this case are simply ridiculous. First of all, Russia has enough of its land, if it were hands to cultivate it ... But the main point is that initially the initiative to turn the agricultural land of Ukraine into a purchase and sale site belonged to the curators of Ukraine from the IMF. In recent years, it was they who entangled Kiev with so many commitments of both material and political nature that, in principle, they could demand that the authorities controlled by them take any decisions to suit themselves. To the fact that bill No. 2178-10 was written out just under the interests of international financial tycoons, there is reinforced concrete evidence.

The only, in fact, foreign companies that can freely buy up fertile black soil, as well as other soils of Ukraine, in accordance with it, are banks! Moreover, if for other owners there is a restriction on the purchase of 10 thousand hectares, then for financial institutions, including foreign ones, it is absent as such. The “relatively fair weaning” scheme is as simple as lowing - bankers will receive land as collateral for loans. The fact that any loan can be made irrevocable in principle, to clarify, I think is not necessary. Within two years, the financiers who allegedly have to own the land will supposedly have to sell it - but it is clear that the property will be transferred to "their" people.

Well, the "battle" for the law continues. And, having invested a lot of money in support of the “post-Maidan” Ukrainian authorities, international bankers are eager to get at least something in return. In addition to agricultural hectares, a country with completely destroyed industry and infrastructure has virtually nothing. Now the Ukrainians can only say: “Goodbye, earth ...”