The project of the aircraft carrier "Lamantin" returns hope to Russia 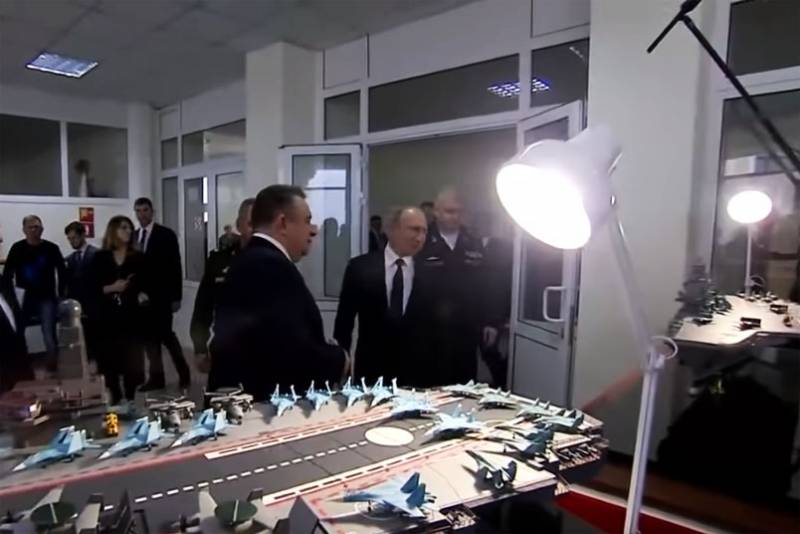 Last week, in Sevastopol, at a promising weapons exhibition, Russian President Vladimir Putin was shown a model of the new Russian aircraft carrier of the Lamantin project, developed at the Nevsky Design Bureau of St. Petersburg.

In the new century, aircraft carrier projects appeared in the public space of Russia with enviable regularity. Design bureaus (mainly the Krylov Scientific Center) presented them in the form of light, medium and heavy aircraft-carrying ships, in atomic and non-atomic versions. (Many advances were given, for example, to the Storm project.) The composition of the air wing varied from three dozen to almost a hundred aircraft.

The initiative audience enthusiastically accepted each new project. Armed for confidence with hats, she declared the next product of design thought “unparalleled in the world.” Then the excitement quietly subsided.

It soon became clear that the project was born as a result of the initiative of the designers themselves. The state didn’t order anything for them, and military officials were interested in the new development in the same way as the public on the Internet networks adjacent to the Ministry of Defense.

The next project provoked two mutually intersecting discussions: whether we need aircraft carriers in principle and - where to build them. Most of the participants in the discussion agreed that the interests of Russia end somewhere on the beam of Yamal or Kamchatka, and by definition, she has nothing to do in the far sea zone. The topic of the weakness of the Russian economy was finally brought up.

Against the background of these disputes, the shipbuilders leisurely made submarines, experimented with small missile ships and modifications of corvettes, put composite minesweepers on the water, and even after long delays they handed over the fleet a pair of surface ships of the first rank.

There is reason for optimism

Disputes about aircraft carriers revived after the not-so-successful expedition of the aircraft-carrying cruiser Admiral of the Fleet of the Soviet Union Kuznetsov to the coast of Syria, and then after the fire on this ship. However, notes in new disputes sounded different. First of all, many people realized that a world power cannot limit itself only to the coastal fleet. Because her interests extend to distant overseas countries.

Last summer, at the International Naval Salon in St. Petersburg, the country saw a draft of the new atomic aircraft carrier 11430E Lamantin. The layout very much resembled the heavy nuclear-powered aircraft-carrying cruiser of project 1143.7 Ulyanovsk, which the Soviet Union could not finish building at the Nikolaev shipyard of Ukraine.

Confused letter "E", which appeared in the literature "Manatee." The designers politely hinted to the authorities that the new project could be launched for export. The same India, for example. Meanwhile, the presentation of "Manatee" in St. Petersburg, in contrast to previous layouts, gave some reasons for optimism. Firstly, there was a feeling that after the events in Venezuela, the authorities felt the need for such a powerful lever of influence on the international situation as the flag carrier group demonstrating the flag.

Secondly, in the Far East, a shipyard is growing up, which is quite tough in a couple of years to master such a serious construction. There are competencies and personnel for the implementation of the project in the country. Finally, in recent years, the Russian budget has been making up with an enviable surplus. A worthy reserve box has been formed, where you can find 200-300 billion rubles that developers ask for the project.

The second appearance of the public of the Lamantina model for the year indicates that the government has matured to the scale of the project. They are impressive. The aircraft carrier is seen by designers with a nuclear power plant with a displacement of 80-90 thousand tons. The hull length is up to 350 meters, the maximum speed is 30 knots, the autonomy is 120 days.

The crew of the ship will be 2800 people. 800 - will ensure the work of the air group. About 60 aircraft will be placed on board (AWACS aircraft, heavy and light fighters, helicopters and drones, including percussion - such as "Hunter"). The ammunition of the wing will draw 1600-2000 tons.

Rumor has it that the new aircraft carrier will be laid at the turn of the years 2023-2024 and put into operation at the end of the decade. Let's hope that this will happen in spite of the prevailing practice of untimely fulfillment of the state order (last December, for example, the commissioning of half a dozen ships was disrupted - from the frigate Admiral Kasatonov to the underwater strategist Prince Vladimir). The project returns hope to Russia.

The Supreme Commander’s interest in the new aircraft carrier suggests that the Manatee project is viable. Not to be mistaken in this assessment ...