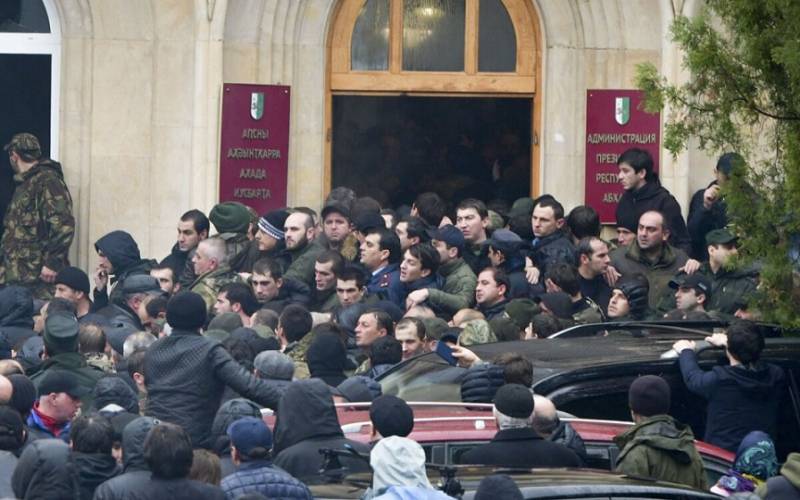 Abkhazia, which recently gained independence in historical terms, is currently in a severe political crisis. Of course, against the background of the situation around Iran, Libya and Ukraine, a crisis in a country with a population of less than 250 thousand people may seem like an easy steam release, but it would be a big mistake to think so. In Abkhazia, the interests of Russia, the collective West, Georgia and Turkey converge. Being closely woven into the Caucasus, Abkhazia is quite capable of becoming a springboard for the expansion of any forces entrenched in Sukhum.

How to light a flame this time

At the moment, there are just over a dozen political parties and movements in the republic. The current president, Raul Khadjimba, is supported by the FNEA (Forum for the Unity of Abkhazia). For the first time, Khadjimba, whom some describe as a “moderate nationalist with a KGB hardening” (Raul was an employee of the KGB of Abkhazia from 1986 to 1992), became president in 2014. At the same time, he stormed the post several times in a row, and just protests in Sukhumi seized the throne with the seizure of the presidential administration and all the ensuing consequences.

Hopes for the rule of Khajimba, to put it mildly, did not materialize. For example, it was repeatedly noted that the rampant crime not only did not decrease, but also began to sweep tourists from the republic like a broom. And the hopes of becoming a tourist paradise, not only in summer but also in winter, have fallen to the bud. Only at the end of November last year, three people were shot dead in the Sukhumi restaurant “San Remo” - two men connected with criminality and a waitress accidentally caught by bullets. A presidential guard was detained on suspicion of murder.

Khadjimba’s view on Abkhaz citizenship also creates no less problems. With all the sweet speeches towards Moscow, which continues to invest significant amounts in Abkhazia, it is almost impossible for a Russian citizen to obtain Abkhaz citizenship. The authorities of the republic have placed so many discriminatory barriers that, even having learned the Abkhaz language, having lived in Abkhazia for at least 10 years, having paid all taxes and having bought property in Sukhum or Pitsunda, a Russian could very well fly with citizenship like plywood over Paris. At the same time, property will be bought at best for nothing.

The opposition forces of Abkhazia, among which the Congress of Russian Communities, often call this situation a kind of apartheid. At the same time, everyone indicates that this state of affairs blocks the influx of both money and well-motivated personnel from Russia: after all, one cannot expect a simple belief in the success of a business from their homegrown specialists who grew up in the atmosphere of the frozen 90s. . 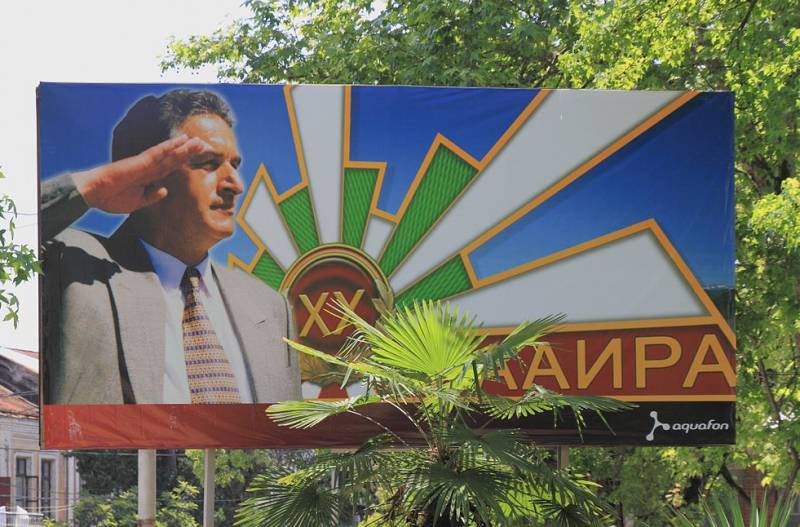 Raul Khajimba's election banner
Against this bleak background, on September 8, 2019, the second round of the presidential election was held. Raul Khajimba gained 47,39%, and his rival, the leader of the Amtsakhara party Alkhas Kvitsiniya, received 46,17% of the vote. And since, according to the law of Abkhazia, only a candidate who received more than 50% of the vote can become the president of the country, the opposition did not recognize the elections and insisted on re-elections.

On September 11, Kvitsiniya appealed to the Supreme Court of the Republic, but was refused. After that, the leader of Amtsakhara filed a cassation appeal against the court decision. The wait dragged on. Finally, in early January 2020, mass demonstrations began. On January 9, deputies of the parliament (People’s Assembly) of Abkhazia proposed Khajimba to voluntarily resign. Already on January 10, a new composition of judges of the cassation board was formed, which recognized the elections as invalid. The rallies continued, because Raul, of course, did not want to resign. Only on January 12, the former security officer signed a letter of resignation.

Fear of the armed crowd

In addition to the difficult criminal situation in Abkhazia and the no less difficult legacy of the Georgian-Abkhaz war, which in the republic is called the domestic war of 1992-1993, the emergence of small arms in discontented crowds is pushed as historical experience and nature of the politics of Abkhazia.

The history of Abkhazia is difficult and sad. Despite the image of the southern paradise being created, almost all the time of its existence, the region was plunged into the abyss of military-political battles. In a small area, the population has always been somewhat divided by views on the future. For example, before entering the Russian Empire, the Principality of Abkhazia was torn apart by an undeclared civil war between two siblings - Sefer-Bey and Aslan-Bey, both were legitimate children of the ruling Abkhaz Prince Chachba. Sefer was guided by Russia, and Aslan by the Ottoman Port. The main thing is that both applicants in a certain period of time maintained relations with both the Turks and the Russians. And, despite the kinship, both brothers were ready to slaughter both each other and Abkhazia.

Application weapons There has never been a taboo in the political game in the Caucasus. Although deep in the old days you should not climb. And modernity promises to bring its share of pepper in the growing crisis. For example, the predecessor of Khajimba, Alexander Ankvab, did not just capitulate to the opposition in 2014. He actually fled from them and took refuge at the Russian base in Gudauta, fearing to be killed. But Alexander Ankvab is not a timid person, a former employee of the USSR Ministry of Internal Affairs, during the war was acting Minister of the Interior, was involved in the exchange of prisoners and went through the whole war. 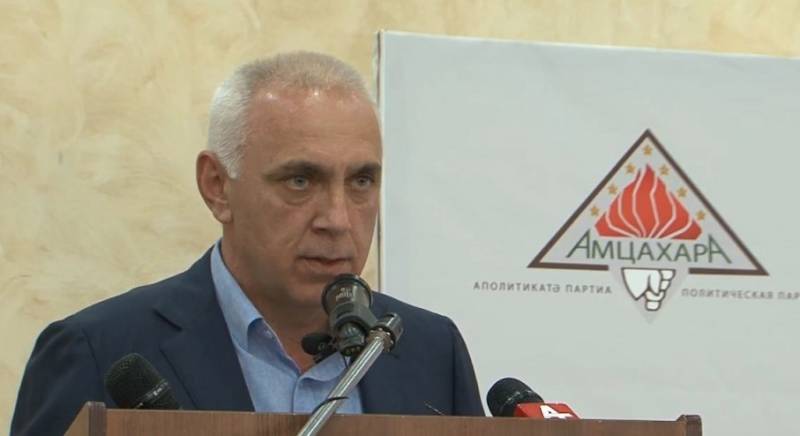 Alkhas Kvitsiniya speaks at the event of the Amtsakhara party
Such a “heredity” is able to repeat itself at any moment. At the same time, given the balance of power, this state resembles a precarious mutual deterrence, since the use of weapons is a bonus of most parties. For example, Quicinia is not just a war veteran. His party, Amtsakhara, was founded without a political agenda in the form of the Union of War Veterans. And after three years, assessing its capabilities, the Union became a significant political force.

In addition, such comrades as Major General Aslan Bzhaniya (a former KGB officer) and Hero of the DPR Ahra Avidzba, who back in December 2019 accused the once acting president of special relations with thieves in law, are opposing Khadjimba. Thus, the use of force is a double-edged weapon.

It’s no secret that the respectable costume of Recep Erdogan hides dreams of Osman’s sultan saber. His pan-Turkic views are also not a secret, and even go far beyond the foundations of this radical idea. In this regard, it is worth recalling that the Ottoman flag once fluttered over Sukhumi, and, of course, Erdogan knows this. He also knows that the last prince of the formally independent Principality of Abkhazia, Kelesh Akhmat Bey Chachba, was educated in the Port and was seated on the throne with the help of Ottoman troops.

The piquancy of the situation is that many presidents of already independent Abkhazia maintained extremely close relations with Ankara due to the presence of a large Abkhaz community in Turkey, which appeared there after the defeat of pro-Turkish political forces and as a result of various historical upheavals. Moreover, some prominent statesmen of Abkhazia were descendants of re-emigrants from Turkey, and Raul Khadjimba belongs to the assimilated Abkhaz family of Turkish origin.

Despite the lack of official diplomatic and trade relations between Abkhazia and Turkey, Turkish business climbed into the country quite tightly and even got "their" people in the field. Thus, Soner Gogua, President of the Apsny Foundation, entrepreneur and plenipotentiary of the Chamber of Commerce and Industry of Abkhazia in Turkey, openly declares that Turkey is the country's second economic partner, and foreign trade between the countries has already reached $ 200 million annually. Gogua also does not hide that "more investment comes from Turkey through our representatives of the diaspora than from Russia." By the way, Gogua himself is a repatriate born in Turkey. 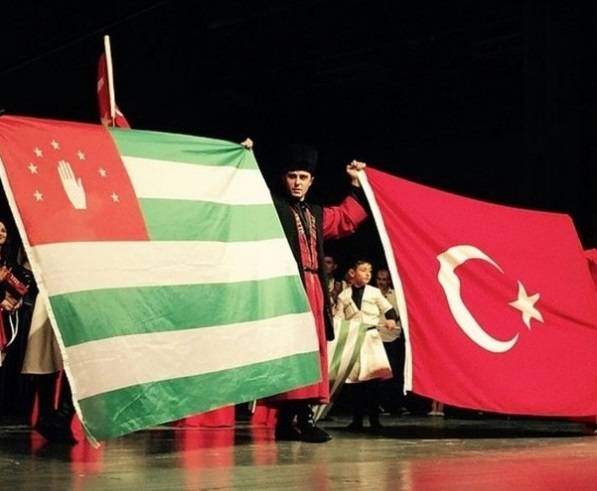 Is the flag of Abkhazia and Turkey just a friendly gesture?
Of course, these relations are officially in the nature of relations between the homeland and the Abkhaz diaspora. But to consider that in authoritarian Turkey with Erdogan's sultan ambitions, whose interests have long spread to the Balkans, the Caucasus, Central Asia, the Middle East and North Africa, they simply forgot about Abkhazia, it is unusually naive. Moreover, Abkhazia is only a springboard for Turkey, because the Abkhaz people are kindred and historically connected with the Adyghe, Abazin and Kabardin residents living in Adygea, Kabardino-Balkaria and Karachay-Cherkessia. Already, there is a dense "cultural" interaction in the framework of various associations and projects.

Unfortunately, there is a lasting impression that Russian officials who regularly pay visits to the republic do not notice all these nuances. They simply try to fill its problems with financing, but as if nobody was in a hurry to think about lobbying the interests of the state and its citizens. At the same time, financing of the republic in the end has a negative impact both on Abkhazia itself and on Russia, which puts money into the void.

And if Turkish finances flow precisely as investments with the prospect of their return, then Moscow pours money to the local authorities almost in the hope that those with their lucrative performances will spend them for the good of the republic and integration with Russia. Moreover, no one is engaged in the education of their own personnel for the management of Abkhazia. With such a policy, one should ask: how many years are left until the person who was educated in Istanbul sits in the chair of independent Abkhazia, whose peaceful sleep is protected by the 7th Krasnodar Red Banner Orders of Kutuzov and Red Star? Moreover, once the Georgian Adzharia is already economically occupied by Turkey.

We are in Yandex Zen
Nikolay Silaev, Andrei Sushentsov: Georgia after the elections and prospects for Russian-Georgian relations
Religious conflict in Abkhazia? It is possible
49 comments
Information
Dear reader, to leave comments on the publication, you must to register.