Corvette project 11664: there are chances to get to the construction 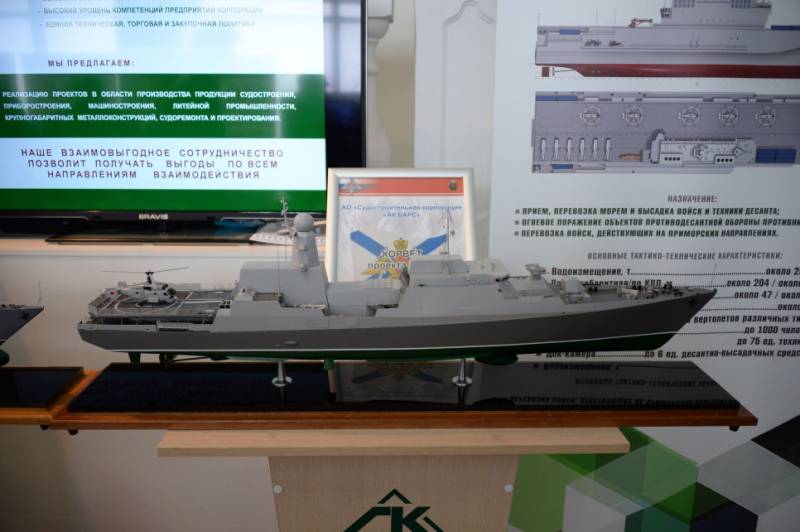 In the interests of the Russian naval fleet new warships of all major classes are being developed, and several of these projects have recently been presented to the country's leadership. On January 9, an exhibition was held in Sevastopol on the prospects for the development of the Navy, during which all the major shipbuilding enterprises showed their latest products. Thus, Ak Bars shipbuilding corporation for the first time showed materials on the project of the 11664 corvette.

Promising prospect 11664 was developed by Zelenodolsk Design Bureau, which is part of Ak Bars Insurance Company. The ship’s layout was presented to the country's leadership by the chief engineer of the Zaliv factory in Kerch. Probably this particular enterprise is considered as a site for the construction of new ships. Together with the “11664” corvette, several other developments were demonstrated.

Like a number of other promising ships, the corvette pr. 11664 is an option of deep modernization of the frigate pr. 11661 "Cheetah", previously created Zelenodolsky design bureau. When creating a new project, the existing experience combined with modern ideas was used. In particular, the design uses ideas that correspond to the current trends in world shipbuilding.

From the ships of the previous project, the new corvette, pr. 11664, is distinguished by increased dimensions and displacement. The length increased to approximately 110 m, displacement - up to 2,5 thousand tons. It is noted that in connection with this, the new corvette turns out to be "a ship of the transitional class between the corvette and the frigate." A conditional definition of “small frigate” is also proposed.

The main differences from its predecessor are a different layout of electronic weapons, increased ammunition of the main strike weapons and more powerful air defense. Also provided is a permanent basing of a deck helicopter designed to carry out anti-submarine defense. 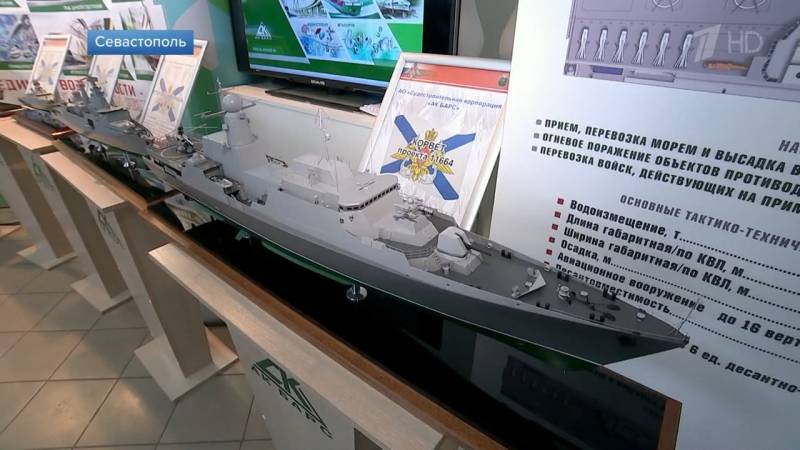 View from a different angle. Frame from t / n "Time", Channel One
The proposed "small frigate" has advantages over other ships of the existing types. So, he bypasses the "Cheetahs" in the number and effectiveness of weapons. Also, project 11664 is compared with patrol teams of project 11540. With comparable armament, the new corvette has almost half the displacement, which positively affects the cost of construction. According to Ak Bars Insurance Company, as a whole, the “11664” corvette has no equal in terms of the ratio of the main characteristics.

To date, Zelenodolsk Design Bureau completed the preparation of the technical design of the new corvette. If the Ministry of Defense orders such a ship, Ak Bars Corporation is ready to prepare the remaining documentation as soon as possible and begin construction. At the same time, there was a hint of readiness for mass production.

The presented layout and tabular data show the main features of the new project and allow us to evaluate some of its qualities. In general, the ship is similar to other domestic developments, but has significant differences - in some cases, they give advantages over other models.

Etc. 11664 uses a body of smooth contours, as similar as possible to that used in Project 11661. Probably, approaches to the design of part of the systems are preserved. The construction of the add-on is noteworthy. Like on a number of other ships, it is divided into several parts of different heights, and the middle one is given under the launchers of an attack rocket complex. On the aft part of the superstructure, which accommodates a hangar for a helicopter, there is an integrated mast with antenna devices - a characteristic feature of modern ships.

The type of power plant is not specified. At the Cheetahs, a combined installation with diesel and gas turbine engines is used. Probably a similar architecture is preserved in the project 11664. 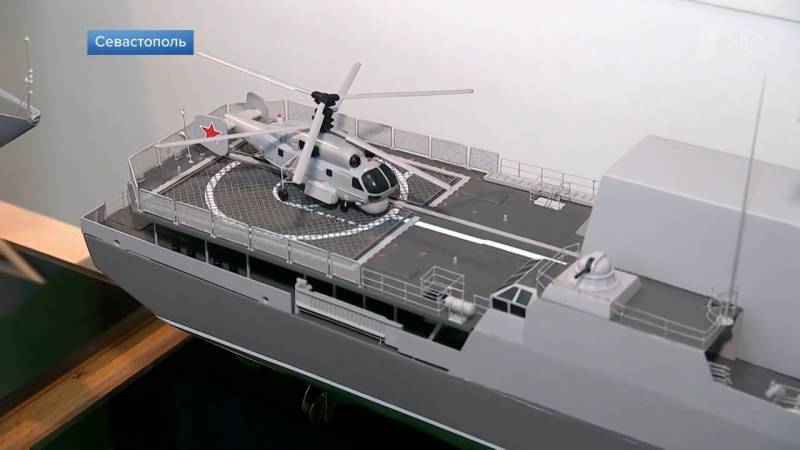 Aft superstructure and deck. Frame from t / n "Time", Channel One
The composition of the corvette's armaments is interesting. On the tank in front of the superstructure is a tower artillery installation. Behind it, on a superstructure, is the Palma air defense missile and artillery complex. Near the hangar are two six-barreled anti-aircraft guns. The central part of the superstructure accommodates a universal vertical launcher with 16 cells for missiles of various types. Such launchers can use Onyx, Caliber, and, probably, perspective Zircon missiles.

The composition of electronic systems is not specified. Probably, the project uses modern samples of all the main classes, providing search and target detection, communication and electronic warfare.

Aft deck is made in the form of a landing pad for a helicopter; there is a hangar next to it in the superstructure. Helicopter type Ka-27 or similar dimensions can be based on the ship on an ongoing basis and perform various tasks.

The developer corporation has already prepared the technical design of the “11664” corvette and is ready to start construction in the shortest possible time - if there is interest from the customer. The Ministry of Defense has not yet announced its opinion on the new corvette. Accordingly, the real prospects of the project remain unknown.

In the presented form, project 11664 looks quite interesting and promising. Zelenodolsk Design Bureau on the basis of existing experience and turnkey solutions completed the ship with characteristic advantages over existing combat units. The new corvette will be able to surpass some of the "competitors" due to greater combat potential, and others due to economic advantages. 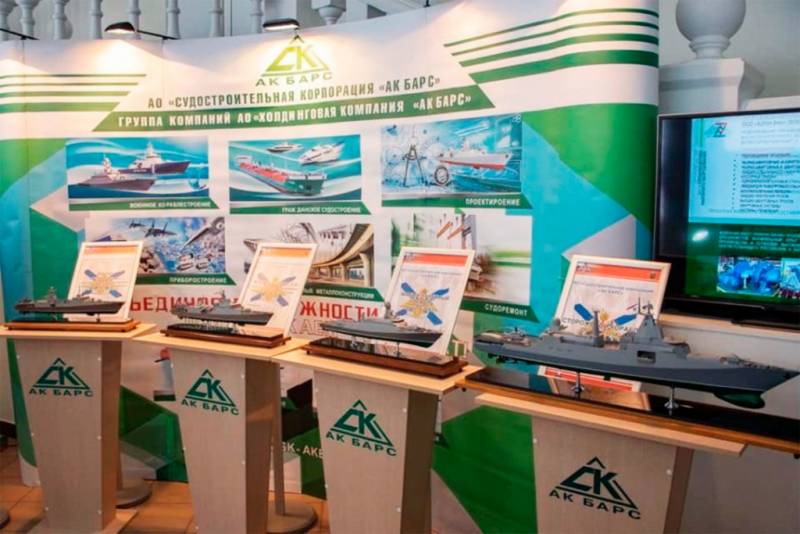 Models of new ships from SK "Ak Bars". Photo SK "Ak Bars" / sk-akbars.ru
The new project 11664 can be a modern replacement for older designs that have similar characteristics, but lose in combat qualities. According to the organization-developer, a promising corvette is able to replace both ships of its class and larger combat units.

However, you can find reasons to criticize the new project. The main problem of the new development is related to the general state of affairs in military shipbuilding. For the fleet, ships of different types with unified weapons are being built, and shipbuilding bureaus offer new projects. The construction of ships for all new projects simply does not make sense, since it leads to the unification of the fleet. For this reason, project 11664 will have to compete with other developments of its own and related classes.

In the near future, the Ministry of Defense will have to familiarize itself with project 11664 and make its decision. If the project suits the fleet command, an order will appear for the development of the necessary documentation and subsequent construction. However, another development of events is possible in which the project will not be implemented in metal.

It should be noted that at the exhibition in Sevastopol, several other similar layouts were demonstrated. Ak Bars Insurance Company presented several options for further development of pr. 11661, including project 11664. They will also have to be proposed by the Ministry of Defense for evaluation, which may result in another order.

Thus, our armed forces are again offered several projects of promising warships. Thanks to this, the Navy gets the opportunity to choose the most successful models that more fully meet the requirements. Which of the recently submitted projects will be of interest to the Ministry of Defense, time will tell. Project 11664 has certain chances to reach the construction site, however, one should not show excessive optimism and overestimate its prospects.