Wing "Seagull-2": waiting for the customer 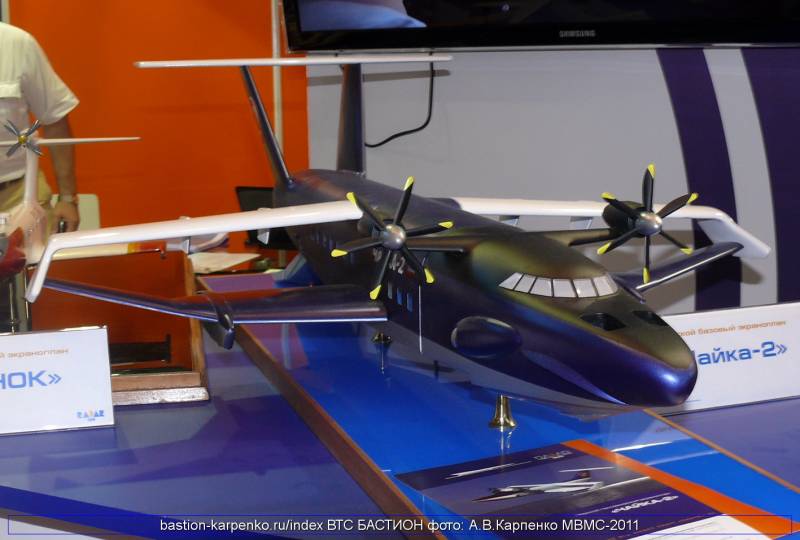 A meeting was held recently in Sevastopol, during which the leaders of the country and the armed forces discussed the prospects for the development of the navy. An exhibition of promising samples of various kinds that could be of interest to the Navy was also held. Together with other samples, the country's leadership was shown the ekranoplan A-050-742D "Seagull-2". This development has been featured at exhibitions for many years and receives high marks, but so far has not even reached the test.

Work on the WIG project A-050 Chaika-2 started about ten years ago. Materials for this development were first presented back in 2011, and since then, mock-ups of a characteristic appearance have regularly appeared at major domestic exhibitions. It was argued that if there was an order, the first model of the new machine could be built already in the middle of the decade.

Subsequently, the Central Design Bureau for the SEC introduced several new modifications of "The Seagull-2." A multipurpose model for the Navy could become the basis for a passenger car with the ability to transport up to 100 people at a distance of several thousand kilometers. In parallel, the A-080 ekranoplan with higher technical characteristics was being developed. 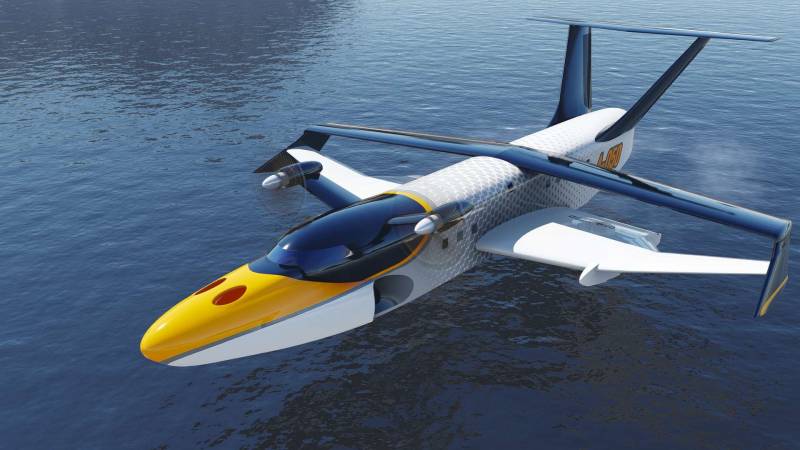 In 2017, for the first time, they showed materials on the next modification of the ekranoplan with the designation A-050-742D. The NPP Radar MMS participated in the creation of this project. During the first show, it was argued that the construction of the experimental “Chaika-2” new modification could be completed as early as 2019-2020.

A few days ago, the already known WIG model A-050-742D "arr. 2017 ”was again shown to a potential customer in the person of the military and political leadership of the country. Despite the high ratings and bold plans of the development organizations, the real prospects of the sample have not been determined. Moreover, the future of the entire direction of ekranoplanes remains unclear.

WIG A-050-742D "The Seagull-2" is a machine of characteristic appearance, capable of solving a wide range of tasks. It is positioned as a service traveling, transport, sanitary, etc. facilities. In fact, we are talking about a platform with the ability to install various equipment for different jobs. The ekranoplan is proposed to be used on lakes and reservoirs, as well as in coastal areas of the seas. Use on flat snowy areas is not ruled out.

The proposed ekranoplan design is very interesting. All projects of the A-050 line offer the use of an aerodynamic scheme of a biplane with wings of various shapes. The lower plane should have a slight sweep, while the upper one is straight and has a shorter chord length. The tail unit is made in the form of two keels with a slight collapse, on which a stabilizer is installed. 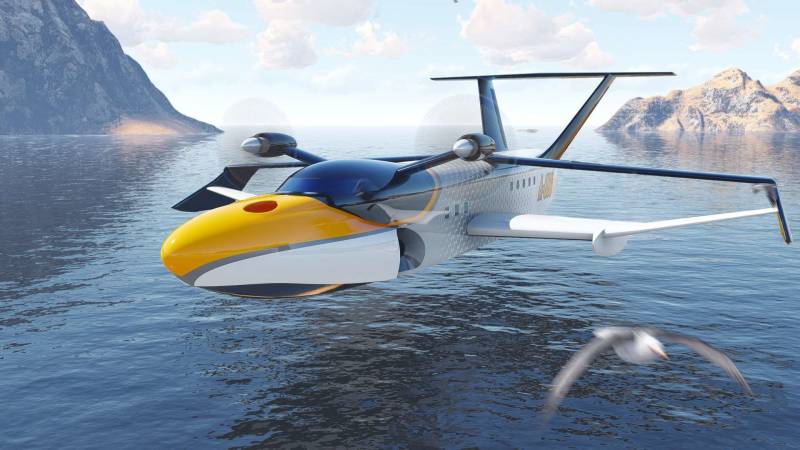 It was previously mentioned that Chaika-2 should receive a set of four engines - two starting and two marching. In the nose of the fuselage, it was proposed to place two turbojet R-195s used for dispersal and take-off from the water. On the side pylons, at the cockpit level, gondolas with turboprops TV7-117CM, which are responsible for the flight, are placed.

According to the project, the machine has a length of 34,8 m with a wingspan of 25,35 m. The total displacement / take-off weight is 54 tons. The carrying capacity is set at 9 tons. When flying at the screen, the cruising speed is 350 km / h, and when climbing higher - 450 km / h The maximum range when using the screen is 5 thousand km. Take-off and landing are possible at a wave height of up to 1,5 m; flight - without restrictions. If necessary, the machine can fly at altitudes of up to 3 km, but in this case, the benefits associated with the use of the screen are lost.

The ekranoplan “Chaika-2” has been demonstrated at exhibitions since 2011, and the development organization constantly talked about its advantages and great prospects. It was noted that such a model of equipment may be of interest to the Russian armed forces and civilian structures, including commercial. Other states were also named as potential customers. Negotiations with potential buyers from third countries were even mentioned.

However, over the past years no fundamental changes have occurred. The model of the A-050-742D product is shown at exhibitions and give it high marks, but the construction of a real ekranoplan has not yet begun. Moreover, it is not clear to the end whether it will be possible to launch it in the near future. The prospects for the project as a whole are still vague and leave a lot of questions. 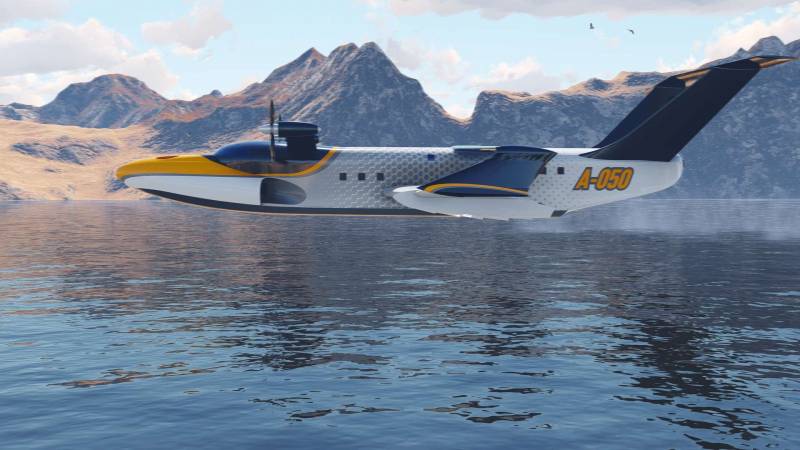 The reasons for all this are obvious. The military department and various civilian structures do not yet see the need for urgent purchase and implementation of ekranoplans. The technique of this class is distinguished by its specific appearance, and also has characteristic pros and cons. As a result, its implementation in existing structures can be complex and far from always advisable.

However, the possibility of developing, building and adopting new ekranoplanes is not completely ruled out. A few years ago it became known about the plans of the Ministry of Defense to study the topic of ekranoplanes with missile weapons. However, the implementation of such projects was planned for the distant future - not earlier than 2020. The indicated dates have already come, but no new messages have been received on this topic. It is possible that the direction of ekranoplanes again refused.

Thus, Russian structures, considered as potential customers, have not yet shown real interest in the entire direction of ekranoplans. Because of this, new projects are shown year after year at exhibitions, but do not reach full implementation. So far, this fully applies to the joint project of the Central Design Bureau in the SEC and Radar MMS A-050-742D Chaika-2.

However, despite the lack of interest from customers, the developers of new technology continue their activities and improve their projects. Based on the available data, one can imagine what Chaika-2 can do in case of receiving an order and launching mass production. 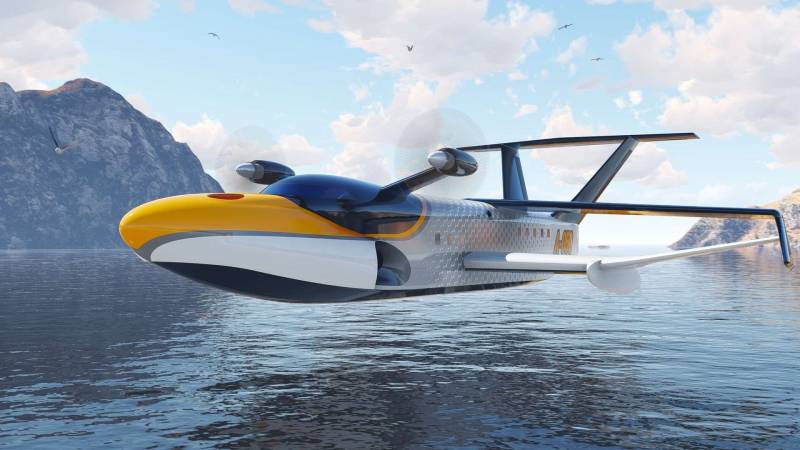 In the proposed form, the A-050-742D ekranoplan is a multi-purpose vehicle capable of taking on board various payloads. It can be considered as an alternative or addition to transport (military transport) aircraft or small displacement ships. At the same time, the ekranoplan according to different characteristics has advantages both over ships and over airplanes.

The main task of ekranoplanes of the A-050 line should be the transportation of people or cargo over considerable distances. Such functions may interest military or civilian structures. It is possible to install various monitoring equipment, which will allow the ekranoplan to conduct patrols in the interests of the Navy or to carry out scientific monitoring. Last fall, domestic media reported on the possibility of using "Seagull-2" in the space sector. So, during launches from the Vostochny cosmodrome, part of the trajectory of rockets and ships should lie over the Pacific Ocean. WIG can be involved in search and rescue operations.

The domestic industry, represented by several enterprises at once, is working on the creation of new ekranoplan projects. However, the main customers, state and commercial structures, are not in a hurry to order such equipment. As a result of this, a whole series of promising projects, such as A-050-742D Chaika-2, has so far been implemented only in the form of models and does not advance beyond exhibitions.

Nevertheless, in this situation there are some reasons for cautious optimism. Central Clinical Hospital for SEC. Alekseeva, Radar MMS and other enterprises continue research and development, due to which they retain the necessary competencies and develop new experience, as well as create various options for promising ekranoplanes. Thus, in the future, when a real customer appears, they will be able to complete the design and start construction at the minimum time. However, the appearance of the customer, and with it the prospects of the entire direction, is still in question.

We are in Yandex Zen
Ekranoplanam - to be!
Flying over the waves
Military Reviewin Yandex News
Read Military Reviewin Google News
Loading ...
102 comments
Information
Dear reader, to leave comments on the publication, you must to register.