Whose submarines is preparing to sink Ukraine: on the situation in the Navy of the Armed Forces of Ukraine 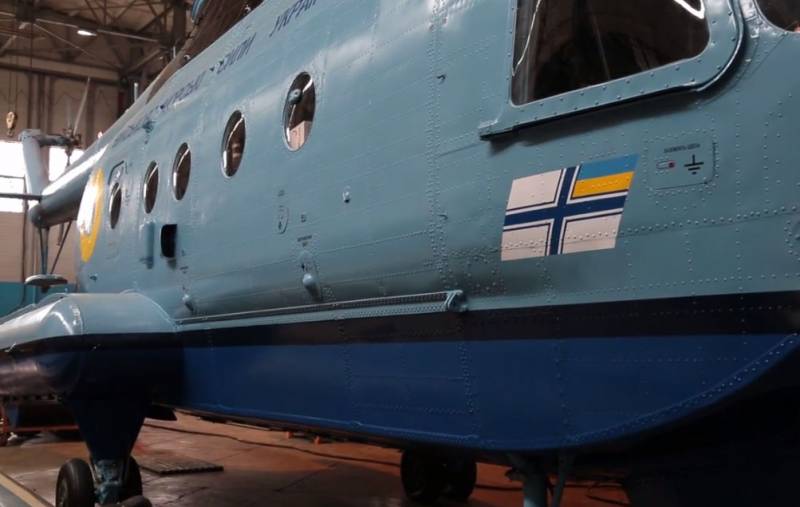 Recently, the “non-down” armed forces have been suspiciously paying much attention to the development of forces and means aimed at combating enemy underwater means. Due to the complete, almost complete lack of military fleet, the main emphasis here is on combat Aviationor, more precisely, for helicopters, which in Ukraine, taking into account the available industrial capacities, can at least support them in a state of combat readiness. Judging by the available information, the APU intends to bet on them in a hypothetical "submarine war", where by definition they can have only one probable enemy.


So, before the end of 2019, it was expected that the Mi-10PCh (Mi-14PL) anti-submarine helicopter would be part of the 14th naval aviation brigade of the Ukrainian Navy. The machine, of course, is far from new, however, in addition to the overhaul, it also had to undergo a major modernization - with the installation of multifunctional navigation and communication equipment, a navigation indicator, new intercom systems, weather radar and more. According to the declared capabilities, the helicopter will be able not only to search for enemy underwater objects and track them with the help of special radio-acoustic buoys, but also to destroy them independently using bomb and torpedo weapons. Going to drown submarines ...

The airborne brigade of the Armed Forces of the Armed Forces of the Armed Forces and the recently adopted Mi-8MSB-V helicopter recently adopted armaments. They really worked on him quite seriously. For example, a new TV3-117VMA-SBM1V engine manufactured by the Ukrainian Motor Sich was installed instead of the previously existing TV2-117. Also, this machine had thermal reflectors, reducing the possibility of hitting it with missiles with the corresponding homing heads, some more useful options were added. However, the main thing is the expected installation on Mi-8MSB-V of a new development by Ukrainian craftsmen from the military-industrial complex of new missile weapon systems - both unguided (B8V8MSB) and managed.

According to the developers, the Barrier-V guided missile system, which is designed to be installed on Mi-8MSB-V and (in the future) Mi-24 helicopters, is quite replacing the Soviet-style Sturm-V complex production. Both its control system and missiles are products exclusively of Ukrainian enterprises. It should be noted that "anti-submarine" tactical exercises are carried out by the Naval Aviation Command fairly regularly. Last summer, Mi-14, Ka-27 and An-26 aircraft participated in them, which, of course, “conditionally sunk” the “conditional submarine of the enemy” quite successfully. Now, with the receipt of new technology, such maneuvers, presumably, will take place with even greater scope and even more convincing conditional victories.

Generally speaking, Ukraine is building up its own naval component at an accelerated pace. This year, according to Anatoly Petrenko, the Deputy Minister of Defense for European Integration, in addition to the two American Island class boats received from the United States, six more Russian-made military ships, the Centaur Project 58503 landing assault boats, must join the Navy there. and small armored boats of the project 58155 Gyurza-M. Yes, yes - those who "lit up" during the "Kerch incident." In addition, as far as is known, the Ukrainian Cabinet of Ministers supported the idea of ​​purchasing another 20 patrol vessels worth $ 136 and a half million dollars from the French company OKIA. Add to this the very real prospects of Kiev receiving anti-ship missiles from Washington, recently voiced by William Taylor, former US Chargé d'Affaires in Ukraine.

Given the complete absence of naval forces in the republics of Donbass, as well as the “nervous itch” that has significantly increased lately in Ukraine over the Crimea, questions about who it is planned to use against all of these accumulated, as they say, “from the world over thread "of forces and means can hardly be considered appropriate.