Combat aircraft. "Beast" which is a hell of a duck 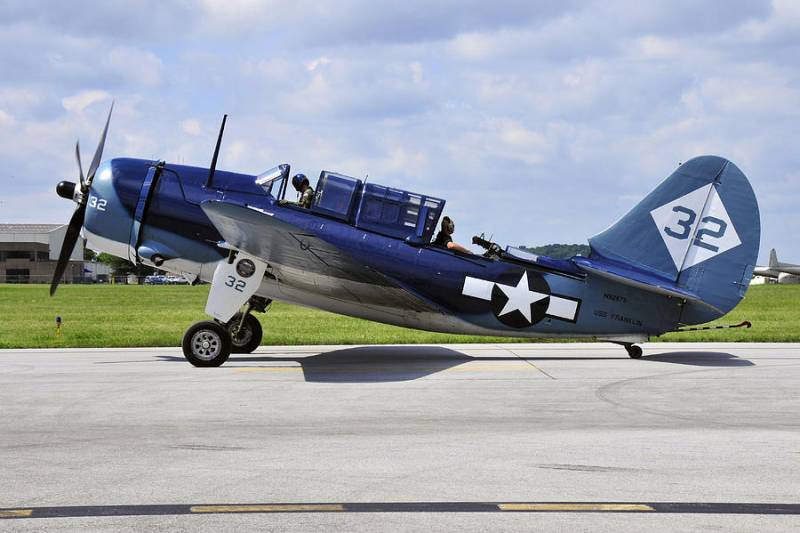 History aviation - a difficult thing, and sometimes it’s very difficult to clearly determine whether the plane was bad or good. Or it even happened that a plane, at first clearly considered disgusting, showed itself in such a way that it left a good memory.


An example is the American bomber B-26 “Marauder”, which first received the unflattering nickname “widower”, and ended the war in the rank of one of the best front-line bombers. Or the very controversial Soviet LaGG-3 fighter, which became the La-5 and La-7 with the help of an air-cooled engine, by airplanes appreciated by Soviet pilots.

That's about the same thing happened with the "Infernal Diver." In general, the name of the plane has nothing to do with some mystical diver to hell. No mysticism. Helldiver is just a duck. Motley toad, found in both Americas. Just a bird, distinguished by the fact that it can dive very deeply and for a long time, swimming fairly decent distances under water and diving unexpectedly and with special effects. Therefore, the British nicknamed the duck a "water witch", and the Americans a "hellish diver."

The products of the company "Curtiss" "Infernal plunger" had the name "accustomed." So called deck bomber, which were developed by the company.

The first, the Curtiss F8C, appeared back in 1929. He is considered the progenitor of the class of deck diving not only in the United States, but throughout the world. Naturally, it was a biplane. 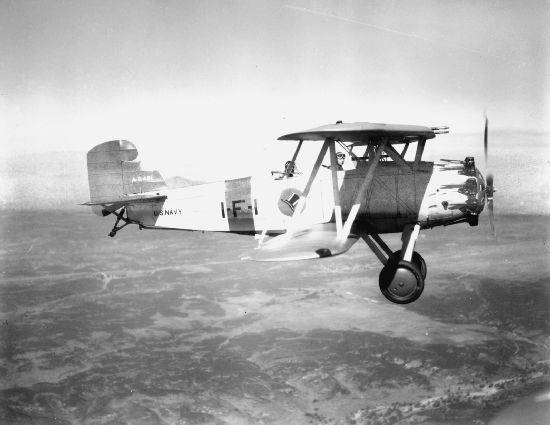 Then, in 1935, he was replaced by an SBC reconnaissance bomber, also made in a biplane scheme, but more advanced, with a retractable landing gear and an enclosed cockpit. And the SBC went down in history as the last biplane in service with the American fleet. 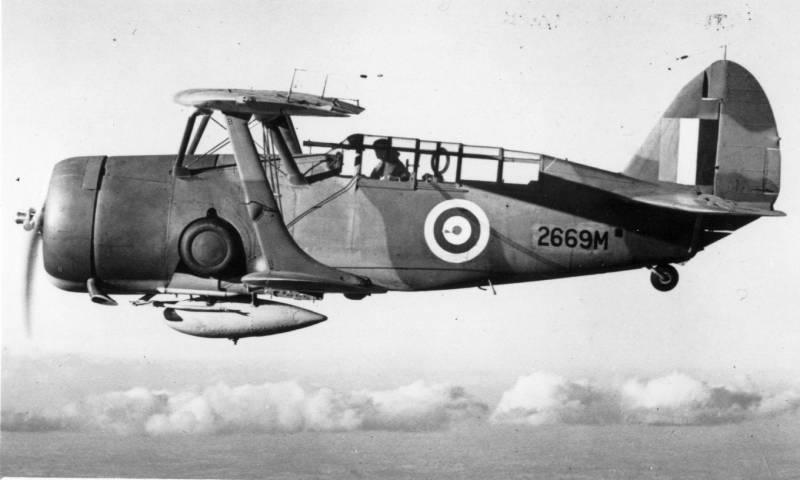 Well, the third "diver" was our hero. 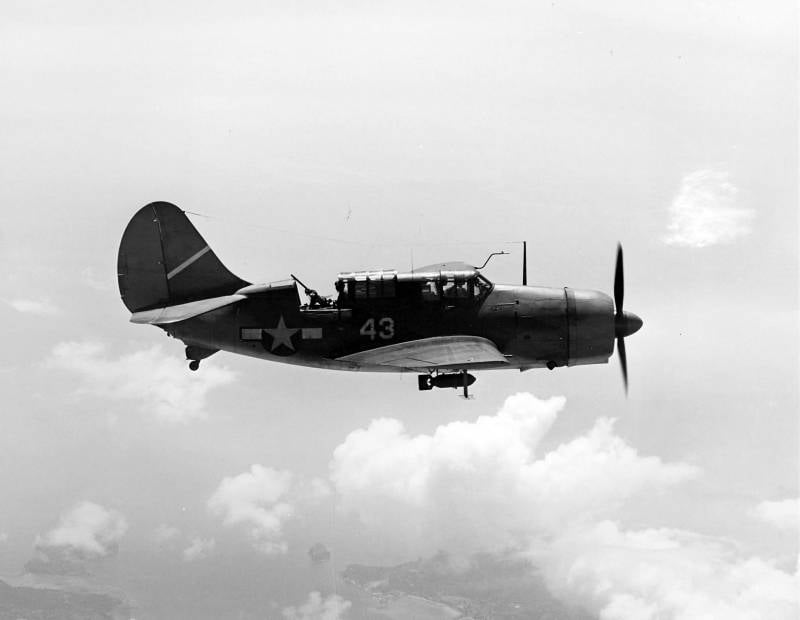 In general, in 1938, the US Navy adopted the Douglas dive bomber made by Douglas. The car was quite modern, a monoplane with a closed cockpit, retractable landing gear and good flight characteristics, but something prompted the naval command to declare tactical and technical requirements for a new deck dive with even higher characteristics.

The US Navy wanted a new bomber, with increased speed, range and bomb load.

Dontless's standard combat load was a 500-pound (227 kg) bomb, but at the end of the 30s this ammunition was no longer considered sufficient for the sinking of large warships. In accordance with the requirements of the new bomber, the bomb load increased exactly twice - either one 1000-pound (454 kg) bomb or two 500-pound bombs.

But the most terrible requirement for a new car was dimensions. Many firms even refused to try to build an aircraft that was supposed to fit into the geometric requirements of the protocol.

The stumbling block was the platform of a standard aircraft carrier lift-aircraft lift on an aircraft carrier - 12,2 x 14,6 meters. Navy commanders categorically insisted that TWO aircraft were to be placed on this platform.

As a result, there were only two people who wanted to compete for the contract. Curtiss and Brewster.

The Curtiss plane immediately puzzled engineers, demonstrating too high a stall speed and low track stability. I had to join the battle with the plane, which really did not start flying.

The first drawback was eliminated by increasing the wing area from 35,9 to 39,2 square meters. m and the installation of automatic slats, which were produced and removed synchronously with the chassis.

The second was more difficult, because the classic way to increase stability by lengthening the rear of the fuselage was not good here because of the already mentioned overall limits. The HellDiver is already very short and very thick. I had to solve the problem by increasing the area of ​​the tail.

But very well managed to frolic in terms of weapons. Then the Yankees from Curtiss pulled away to the fullest, sending a 500-pound bomb on the Dountless's external sling to the past.

In the voluminous bomb bay of the fat "Helldeiver" easily placed two 500-pound or one 1000-pound bomb. To avoid dropping the dropped bombs into the dive propeller, they were hung on special swinging trapezoid.

And then miracles began that were allowed by the Wright-Cyclone R-2600-8 with a power of 1700 hp. In the reloading version, with a limited fuel supply, it was possible to suspend a 1600-pound (726 kg) bomb or Mk.13 air defense pedal. In these cases, the bomb compartment flaps remained half-open, which markedly reduced flight data, but it was possible to sulk from the heart.

But there was order with small arms. Two synchronous 12,7-mm Browning was installed above the engine and two more - in the center section of the wing, outside the rotor disk of the screw. To protect the rear hemisphere, the Browning spark of 7,62 mm caliber on the annular turret of the radio operator arrow served.

To increase the area of ​​their shelling, the aircraft was equipped with a fashionable novelty of the time - a folding, retractable garrot, called the "turtle." 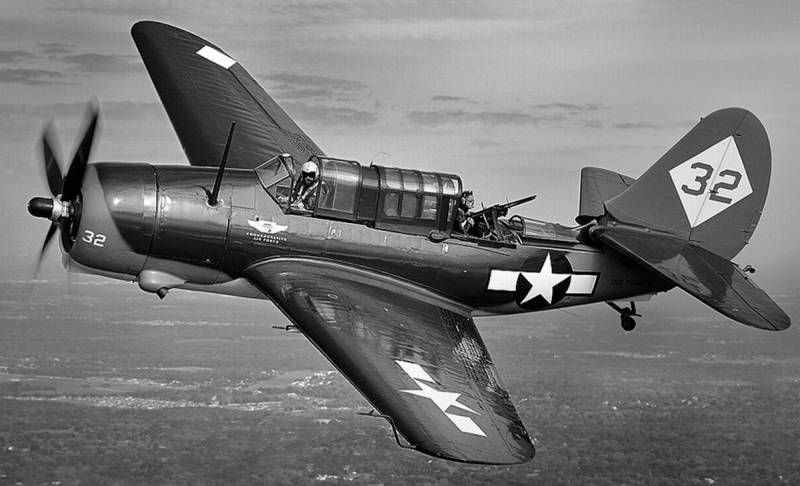 In general, according to the project, they wanted to install a shooting tower on the Helldiver like the one on the Avengers, but it simply did not fit in and had to abandon the tower.

Flight tests began on December 18, 1940. Tester reports were highly controversial. On the one hand, the plane showed really good flight data. The maximum speed reached 515 km / h - a rather high indicator for the bomber at that time. But at the same time, the car was not stable enough on all three axes and poorly controlled at low speeds. This was especially sad, because it was necessary at precisely such speeds to land the plane on the deck of an aircraft carrier. 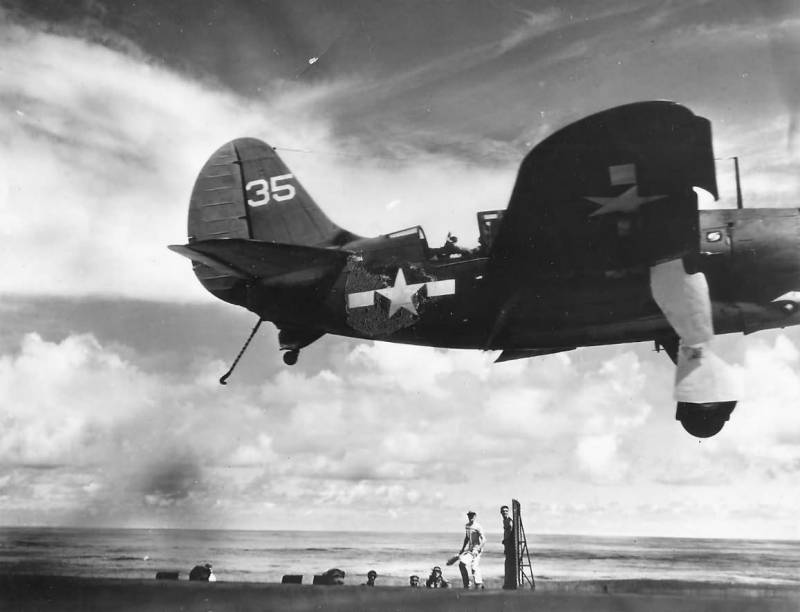 She needed new bombers urgently and in large quantities. And there was nothing to choose from. The second participant in the competition, the Brewster’s aircraft, the Bukanir, turned out to be even worse than the Helldeiver. He was nevertheless launched into the series, but not one of the 750 built cars got to the front. They did not dare and used the aircraft as a training or target towing vehicle.

And here the Americans decided to take a chance at the full. Since there was only one way out, namely, to bring the Helldiver to mind, because the test results could not be called successful. And a very risky decision was made: to launch the Helldiver in a series, and further tests and the introduction of necessary changes to the design should go in parallel with the serial production!

The alignment was very risky. But in June 1942, the first production SB2C-1 came off the assembly line. 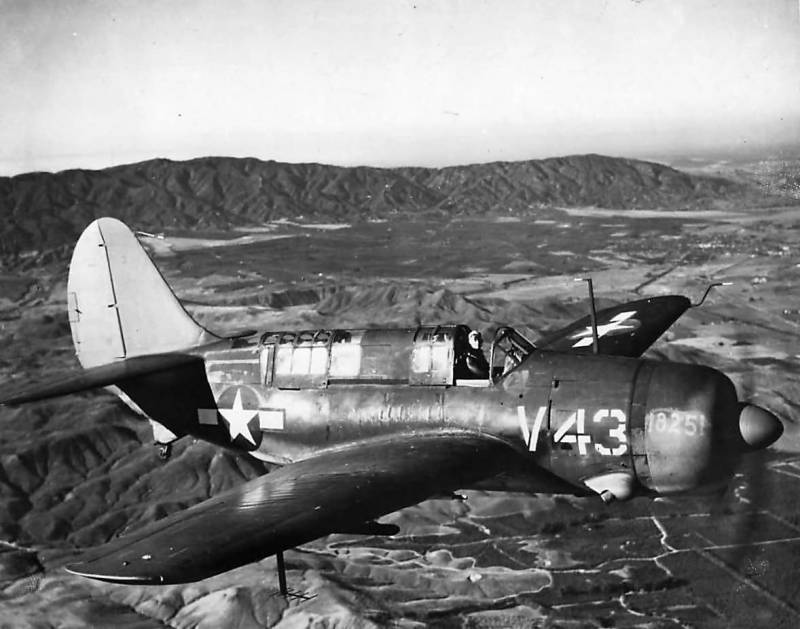 SB2C-1 was quite different from the prototype, and not only for the better.

Under the wing consoles, pylons were reinforced to suspend two 100-pound (45-kg) bombs, additional 220-liter fuel tanks or machine-gun containers. 12,7 mm synchronized machine guns, standing above the engine, were transferred to the center section, and the turret 7,62 mm "Browning" was replaced with one "Browning" 12,7 mm.

From the equipment, a radio compass and ASB anti-ship radar were added.

The protection was also strengthened by installing frontal armored glass and an armored back for the pilot, having reserved a place for a radio operator shooter, the fuel tanks were protected.

Nevertheless, the naval leadership had nowhere to go. While in the fields, more precisely, in the waters of the Dontless’s battles, they were still carrying out combat missions from the last forces, the US Navy command ordered 4 Helldivers. 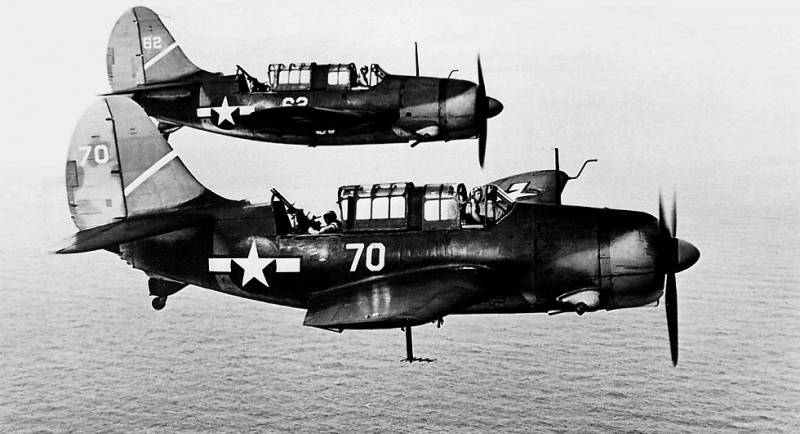 The first "Helldeivers" began to arrive in combat units only in the late autumn of 1942. The first new aircraft received squadrons of aircraft carriers Essex, Bunker Hill and Yorktown. 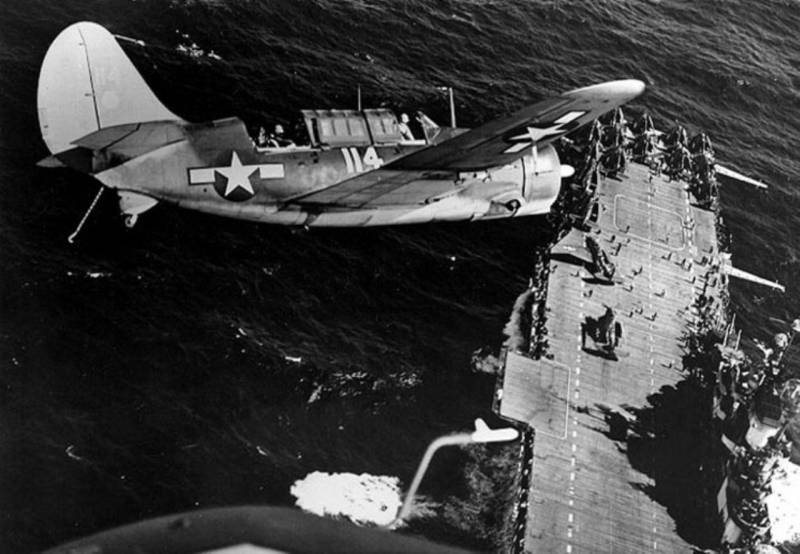 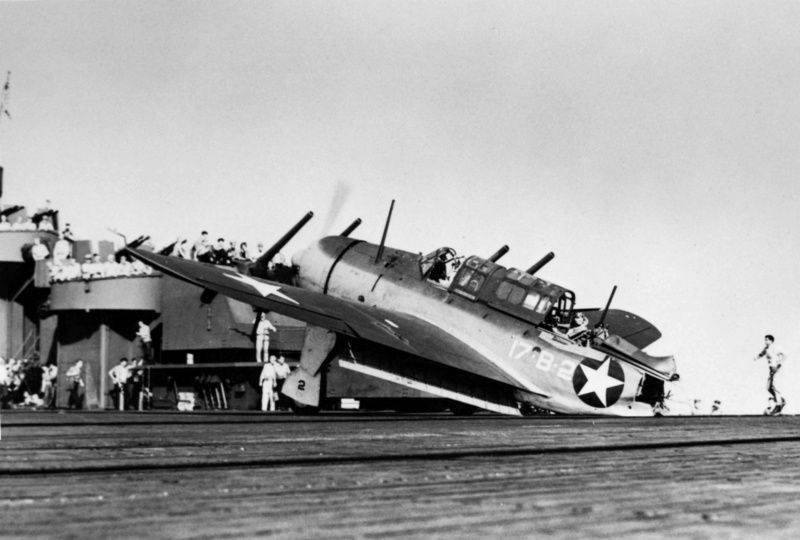 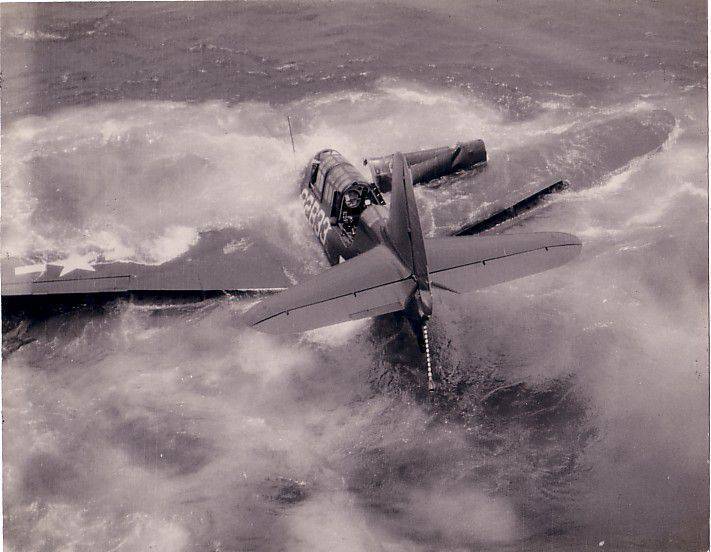 Pilots, accustomed to the extremely obedient and easy-to-manage Dontless, were pretty tormented with the more rigorous and sophisticated Helldiver. Accidents during landing on deck became a common occurrence, and the plane received the offensive nickname “Beast”, which can be translated as “monster” or just “cattle”.

The rodeo continued throughout the winter of 1942-43 on aircraft carriers. Pilots tumbled on the decks of aircraft carriers, tore brake cables, crashed into superstructures and flew overboard, trying to curb the "cattle". Some have already begun to say that the HellDivers should be sent to the landfill as soon as possible and the good old Dontless should be returned.

And then ... Then it started to work out!

Gradually the pilots got used to the Helldiver’s increased landing speed and its tight maneuverability, and it was time to go into battle. 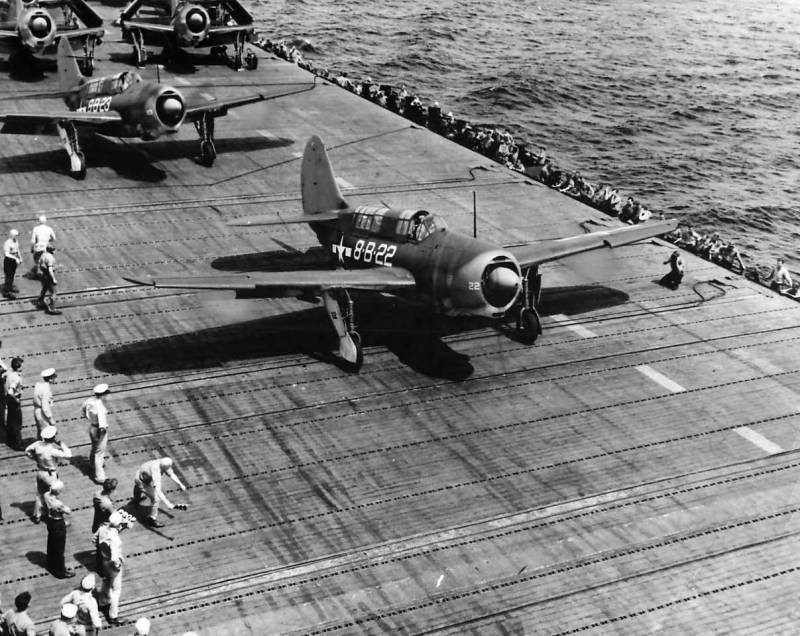 The baptism of fire of the “cattle” took place on November 11, 1943. Squadron VB-17 from the aircraft carrier Bunker Hill participated in a raid on Rabaul - the largest Japanese naval and air base in the South Pacific. 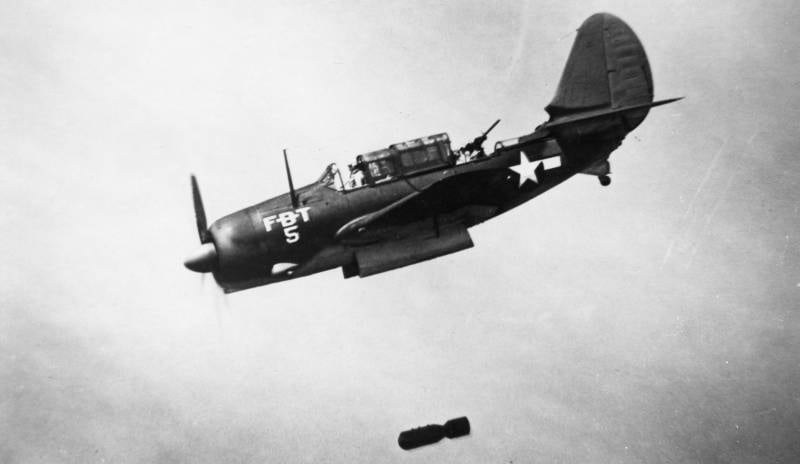 The next combat operation "Helldeivers" was the air support of the landing on the atoll Tarava, which was more than successful. Mainly due to the very weak air defense of the Japanese.

But the success of the Helldeivers over Rabaul and Tarawa significantly improved the reputation of the aircraft, and the naval command made the final choice between the Heldiver and Dontless, and in January 1944 a quick process began to replace the old dive divers with new ones.

At "Curtiss", meanwhile, continued to work on the aircraft, improving it. In the spring of 1944, a new modification of the Helldiver SB2C-1C began to arrive in the squadron. The last letter "C" in its index meant cannon, that is, the modification was cannon. 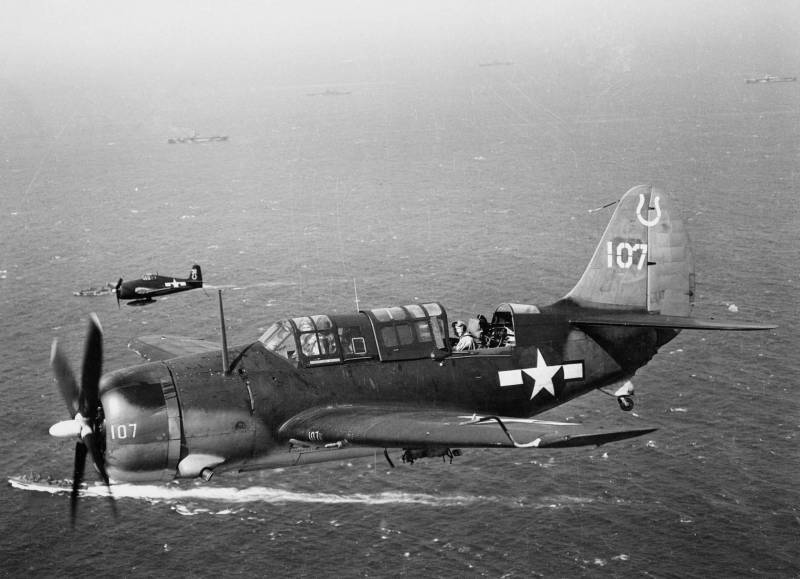 The fleet was offered a float version of the Helldeiver. 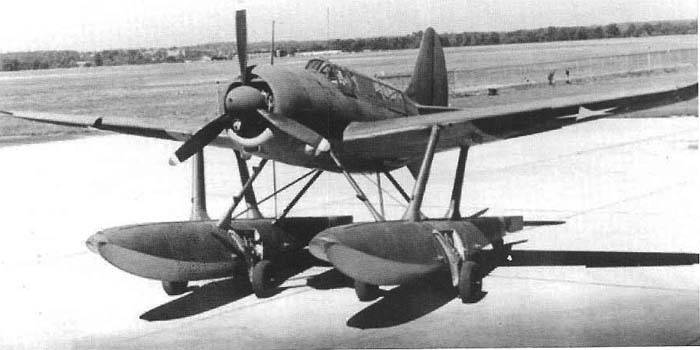 At first, the fleet became interested in the machine and even ordered 294 production units, but then they decided that there was no special need for such an aircraft, and the order was canceled.

By the way, the land version was also produced, without marine equipment and folding wings. A-25s were produced in the amount of 410 vehicles and transferred to the United States Marine Corps.

In general, despite a rather sad start, the Helldiver became the most popular naval dive bomber.

It is difficult to say today how much mistakes and improved the aircraft worked at Curtiss, but there was just a small choice. More precisely, he was not at all, and the American pilots sat at the controls of this aircraft and did their duty.

Throughout the second half of the war, the HellDivers flew over the entire Pacific theater of operations as scouts, attack aircraft, bombers and torpedo bombers. With one degree or another success.

There were also frankly unsuccessful operations, for example, in the battle of the Philippine Islands out of 50 aircraft of this type 41 were lost. But in general, the aircraft was a pretty tough nut for Japanese fighters.

Was the Helldiver a “hell of a duck” or was it a “cattle”? The British did not appreciate it, and they refused the Lend-Lease "Helldivers". 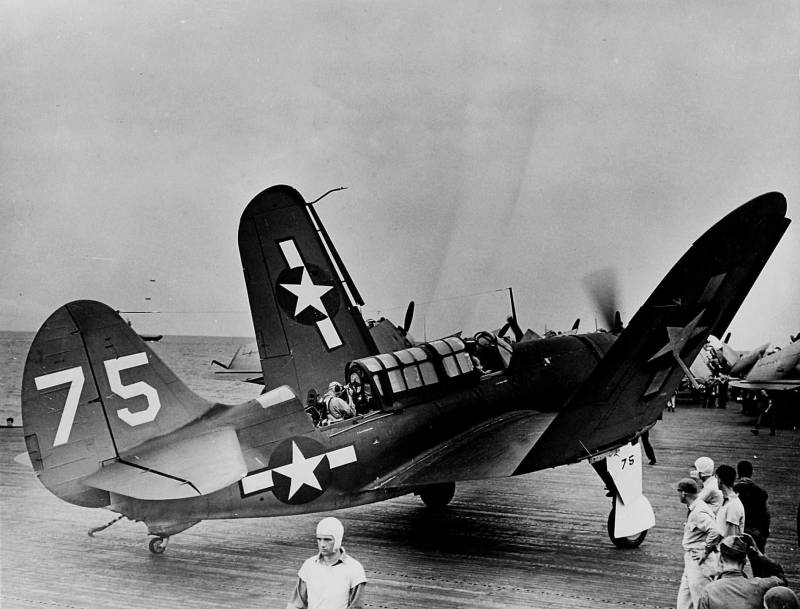 In the United States, on the decks of aircraft carriers and coastal airfields, the Helldeiver was listed as a combat aircraft until 1948, after which it was withdrawn from service. Some of the bombers were transferred to Italy and France, and it was the French who remained the last flying machines of this type, having managed to fight in Indochina. 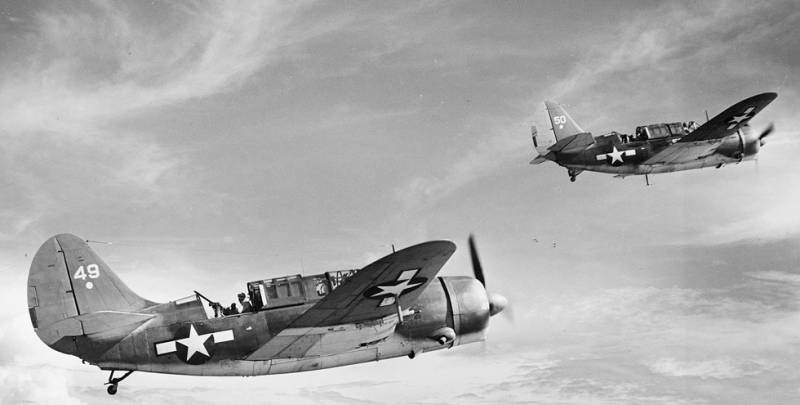 So here the situation can even be compared with our pilots, who fought not on what I would like, but on what happened. So the Americans fought on the HellDivers, and fought successfully. 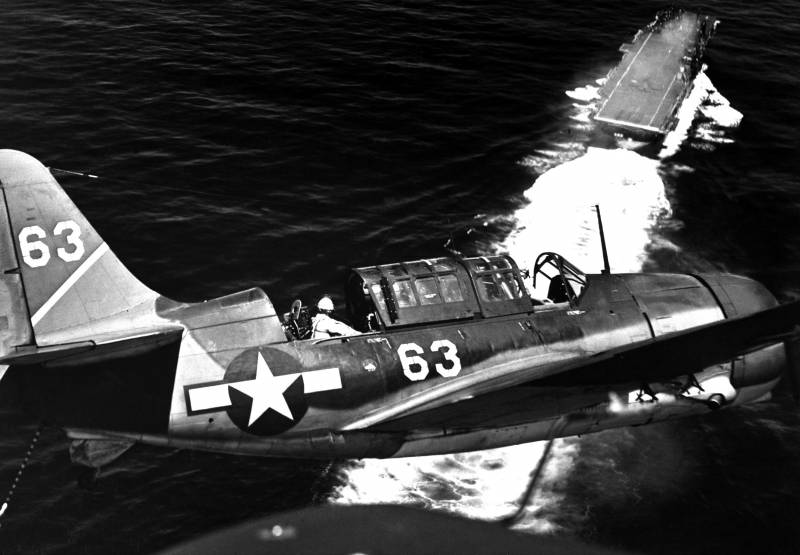