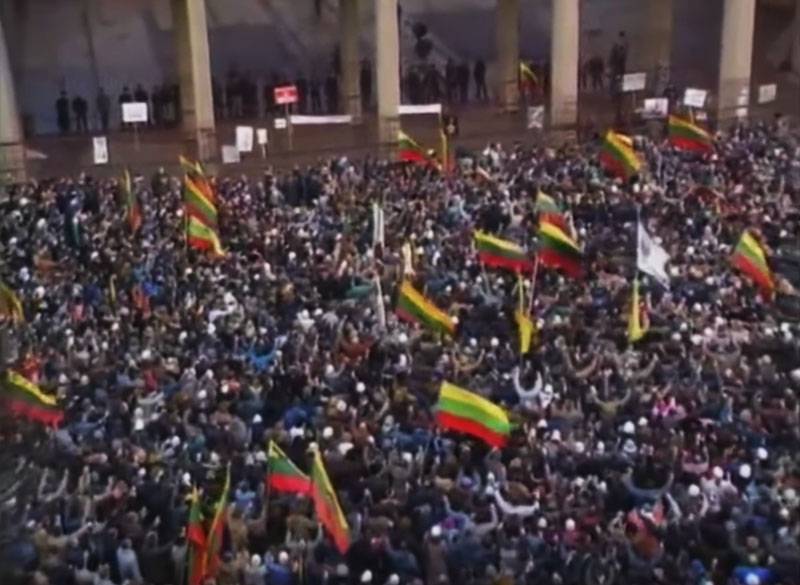 On the night of January 12-13, 1991, personnel and armored vehicles of the Soviet Army and special forces of the Alpha group were introduced into the center of Vilnius. There was an assault on the Vilnius TV tower, during which 13 people were killed.


Lithuania took a clear course towards leaving the USSR at the very beginning of 1990. On the night of March 11, 1990, the Supreme Council of the Lithuanian SSR proclaimed Lithuania an independent state. Moscow then did not recognize the sovereignty of Lithuania, but the nationalist forces already felt very confident in the republic. The Soviet government tried to resist the secession of the republic, but it did so very sluggishly and reluctantly.

In early January 1991, special forces of the KGB of the USSR from the Alpha group arrived in Vilnius. And almost simultaneously on January 7, 1991, the Cabinet of Ministers of the Lithuanian SSR began to "liberalize prices." The cost of basic foods immediately increased by more than three times.

The next day, units of the Pskov airborne division were transferred to Lithuania, and on January 10, Mikhail Gorbachev himself demanded the restoration of the Soviet Constitution on the territory of the Lithuanian SSR and the repeal of anti-Soviet acts adopted by the Supreme Council of Lithuania.

Despite their activity, the nationalist forces of Lithuania at first did not show serious resistance to the Soviet military. At least at 12 a.m. on January XNUMX, Soviet paratroopers occupied the building without any problems, which housed the Territory Protection Department, a Lithuanian security agency not controlled by Moscow.

On the night of January 13, two columns of armored vehicles of the 7th Guards Airborne Division, as well as fighters of the Alpha group, advanced to the center of Vilnius. One column went to the building of the Supreme Council of Lithuania, which gathered thousands of Lithuanians, and the other to the television tower, where crowding was also observed. 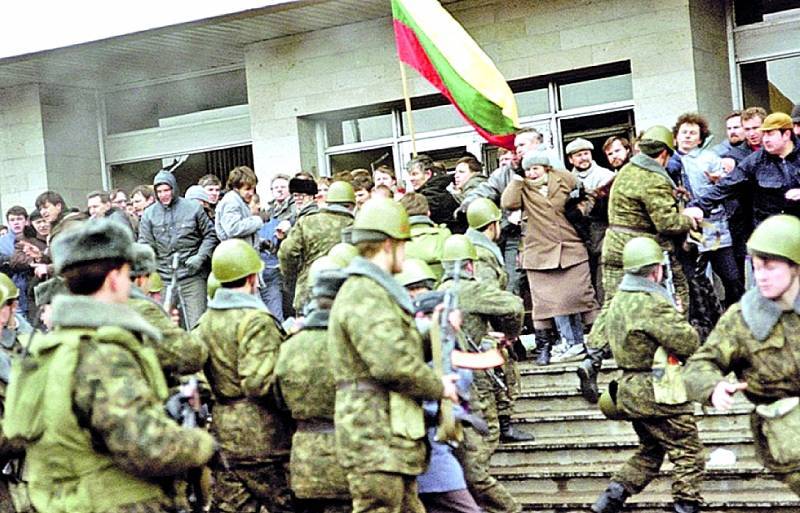 10 first tanks cleared the barriers from cars driven by the "defenders" of the TV tower, and then the Alpha special forces took the building of the television center by storm. At 2 hours and 10 minutes, a Lithuanian television announcer broadcast live that the television center was captured by the Soviet military. At the same time, a message was broadcast on Vilnius radio about the beginning of the USSR aggression against sovereign Lithuania.

During the siege of the tower, 14 people were killed (according to the version of the Lithuanian prosecutor’s office - 15 people), 140 people were injured. Among the dead, by the way, was Lieutenant V.V. Shatskikh, who served in the Alpha group.

By 5 a.m., Soviet troops moved away from the buildings of the Supreme Council of Lithuania and the television center. The order to withdraw the troops was allegedly given by Mikhail Gorbachev himself. However, none of the top officials of the Soviet Union took responsibility for the assault on the television center. Gorbachev himself has repeatedly stated that he did not know anything about the deployment of troops to the center of Vilnius.

An investigation into all the circumstances of the events of January 12-13, 1991 began almost immediately after the final separation of Lithuania from the Soviet Union. In November 1996, a trial began in Vilnius in the case “On the coup d'état of January 13, 1991”. The highest party officials of the Communist Party of the Lithuanian SSR on the platform of the CPSU were in the dock. The first secretary of the CPL Central Committee, Mikolas Burokevicius, was sentenced to 12 years in prison, the head of the ideology department, Juozas Ermalavicius, was sentenced to 8 years, 4 more people received sentences ranging from 3 to 6 years in prison.

However, the Lithuanian authorities really wanted to bring to justice the military personnel who participated in the assault on the television center. Many of them already had Russian citizenship by that time. In 2010, charges against them were reclassified to charges of crimes against humanity and war crimes. In 2011, Colonel Mikhail Golovatov, the former commander of the Alpha group, was detained in Austria, but he was immediately released despite protests from the Lithuanian authorities.

However, speculation on the assault on the telecentre continues. On January 27, 2016, the Vilnius District Court began proceedings on the assault on the television center. 65 people were recognized as accused, of whom only two fell into the dock - Russian citizens Yuri Mel (commanded the tank) and Gennady Ivanov (was the head of the missile and artillery armament service of the 107th motorized rifle division), both officers who were not lucky enough to fall into the hands of Lithuanian authorities already many years after those events.

In the fall of 2019, Yuri Mel made a statement about the threat to his life - according to Mel, in a Lithuanian prison he is not held with political prisoners, but with ordinary criminals - murderers, drug dealers, robbers, and in such conditions he cannot feel safe.

Russia, of course, expressed its protest to the Lithuanian side, but the matter did not go beyond formal statements. Meanwhile, Russian officers remain in a Lithuanian prison, becoming banal “switchmen” responsible for the deeds of the powerful, and the same Mikhail Sergeyevich Gorbachev continues to calmly travel around the world without fear of detention and criminal cases.