The consequences of the Iranian “mistake”. Downed Boeing: from protests in Iran to Turchinov’s “diagnosis” 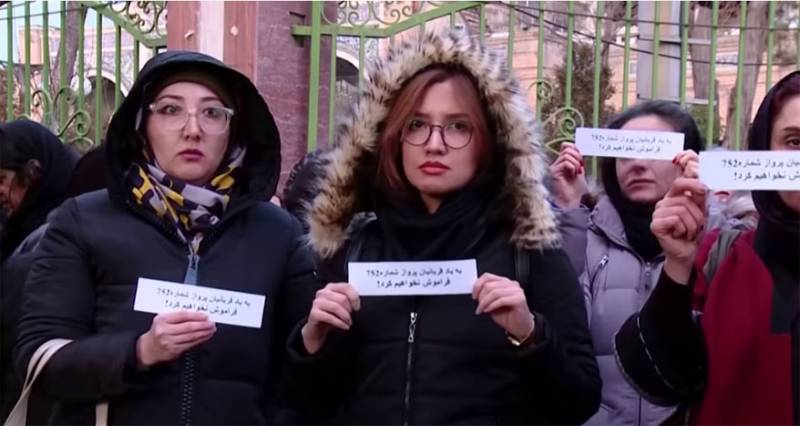 The Boeing 737-800 of Ukraine’s International Airlines, flying to Kiev, was hit by a rocket shortly after departure from Tehran Airport. One hundred seventy-six people were killed, including nine crew members and one hundred and sixty-seven passengers from different countries: Ukraine, Canada, Germany, Sweden, Afghanistan and Iran.


After the Iranian authorities recognized the “error” of the air defense and made a public statement about the downed Ukrainian plane, unofficial mourning processions took place in the cities of Iran. The exit of people on the streets should be recognized as spontaneous. The procession quickly grew into real protests against the current government. In Tehran, several hundred activists even demanded the "resignation" of Ayatollah Khamenei. “Go away!” Was what the demonstrators suggested to him. Also, the protesters proposed to bring this figure to justice.

The echo of Iranian popular indignation has reached the United States. President D. Trump has supported the protests on Twitter. Trump told the "suffering people of Iran" that he supports him, the entire American government also supports it and "will continue to support it." The courage of the Iranians who took to the streets, he called "inspiring."

English site "Voices of America" quoted by US Special Representative for Iran, Brian Hook. He told the Voice correspondent that "we [the United States] support the brave Iranian people one hundred percent." Hook also noted:

“Protesters stigmatize the shameful actions of the IRGC and tear down the Suleimani posters displayed by the regime. It is said that Suleimani was a murderer, like Khamenei. The protesters are right! ”

Voice of America also cites the words of President of Ukraine Volodymyr Zelensky. The President advocated a full and open investigation and prosecution of the perpetrators of the disaster.

As for the unofficial Ukraine, that traditionally blamed Russia. Blamed not from the rostrum due to the lack thereof, but at the level of social networks.

Former NSDC secretary A. Turchinov made a “diagnosis” on Facebook: they say that not only the Iranian leadership should answer for the downing of the Boeing, but also the Russian leadership: after all, this is the second Boeing passenger destroyed recently by a Russian missile According to Turchinov, who cite Ukrainian media,

"Just as in the case of the Malaysian plane, the Russian leadership in its official statements tried not only to support Iran as its strategic partner, but also to misinform the world community, inventing false versions of this terrible tragedy."
According to Turchinov, Ukraine should now demand an extraordinary meeting of the Security Council at the UN, to ensure an investigation of the crash of the liner and to hold the leadership of both Russia and Iran accountable.

As if to tone Turchinov made the Russian opposition politician A. Navalny. He also spoke out on the Internet - like Trump, in "Twitter". His statement looks like this: 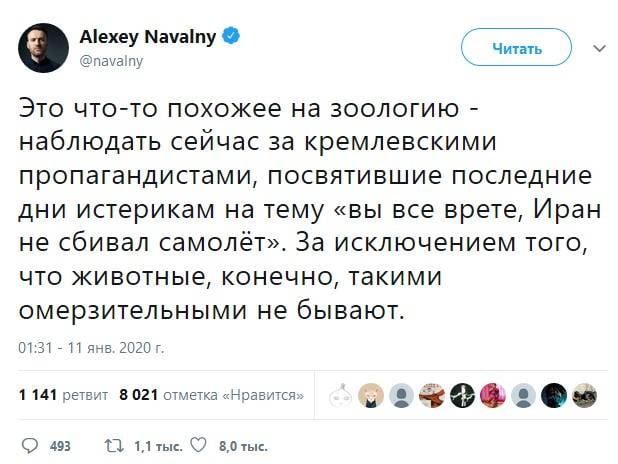 Objected Turchinov and others like him Alexei Pushkov. Also in "Twitter". Pushkov, as we see, made Turchinov a “diagnosis”. 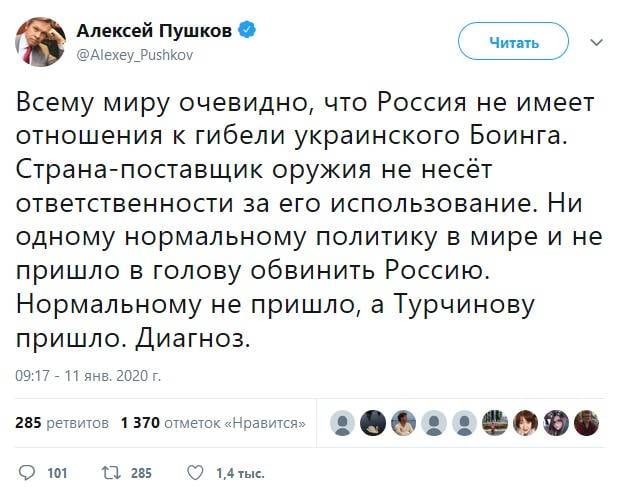 At the end of the review, a few words about the political decisions of Canada. Government position was expressed by Canadian Prime Minister Trudeau, who had previously spoken out about the downed plane. He did not write in social networks, but made a statement to the press.

The Prime Minister of Canada said that the main task of the authorities now is to obtain from Tehran an impartial investigation into the crash of the plane, which flew sixty-three Canadian citizens. The Prime Minister personally spoke with several relatives of the victims and concluded that they wanted justice. The Canadian government will not calm down until it receives a report and judicial completion of the case.