Russian icebreaker fleet: where the climate is harsh 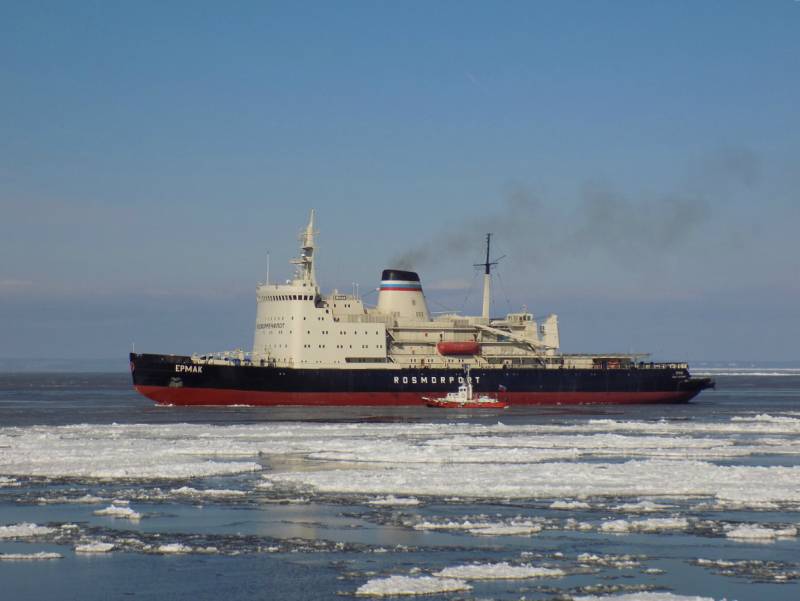 Currently, Russia is one of the few states that have their own icebreaker fleet. More than 40 icebreakers of various classes are in operation, as well as several ships with a nuclear power plant. Both in quantity and in quality, the icebreaking fleet of Russia has no equal in the world. However, its development does not stop.

According to well-known data, 41 icebreakers of several classes and types are currently operating in our country. These vessels are capable of supporting port operations or conducting caravans along routes. All available icebreakers are distributed among several major operators and operate in all regions where their assistance is required.

The largest fleet of icebreakers belongs to the FSUE “Rosmorport” - more than 30 units. The fleet consists of several types of ships, and it is only about diesel icebreakers. Equipment of similar classes is also available at several shipping companies of different regions that are not part of Rosmorport.

The ship "Mudyug" in St. Petersburg. Photo Fleetphoto.ru
The small but important icebreaker fleet belongs to the Atomflot FSUE. This organization is responsible for the operation of four nuclear icebreakers, one ice-class nuclear lighter carrier and support vessels. There are plans to decommission part of the nuclear icebreakers with the replacement of new vessels.

Icebreakers are assigned to a number of Russian ports, but their bulk is concentrated in only a few places. The largest number of icebreakers is in St. Petersburg and Murmansk. Also, ships are based in Arkhangelsk, Vladivostok, Kaliningrad, etc. This distribution of the icebreaker fleet allows for the operation of ports and transportation in all major directions, both at sea and on some rivers.

The oldest icebreaker available is the Krasin vessel, built in 1917. It remained in service until 1998, after which it was turned into a museum and put up at the pier in St. Petersburg. 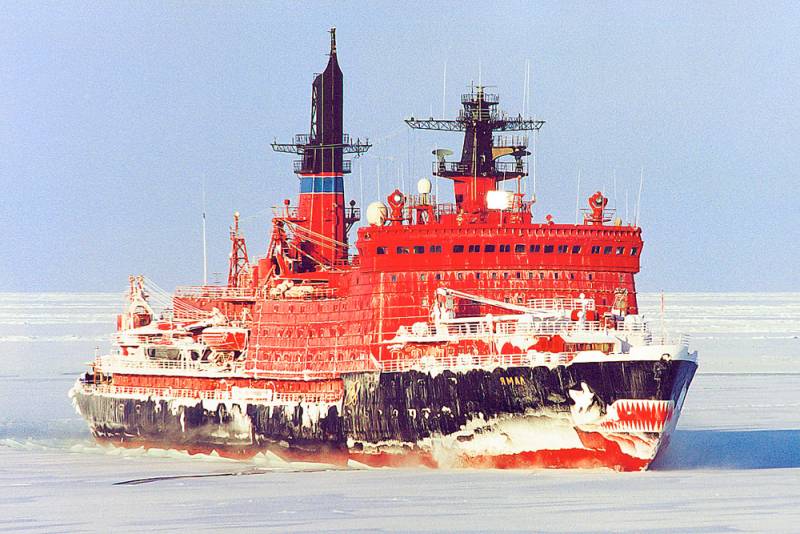 Nuclear-powered icebreaker "Yamal" in the sea. Photo by Rosatom / rosatom.ru
The oldest icebreaker in active service is Karu, also operating in St. Petersburg. This ship was built in the late fifties and until 1986 belonged to Finland. Now it is part of the Rosmorport fleet.

In the years 1973-76. Finland, by Soviet orders, built three diesel icebreakers, R-1039 Ermak Ave. All of them still remain in service. The head "Ermak" serves in St. Petersburg, the serial "Admiral Makarov" and "Krasin" - in Vladivostok. Vessels belong to the respective branches of Rosmorport.

Beginning in the mid-seventies, 21 icebreakers of projects 1101, 1105, 1108 and 1191 were built specifically for the USSR in Helsinki. 20 ships of these types still continue to serve. Their main operator is Rosmorport, but several vessels are owned by the Lena United River Shipping Company (postscript in Tiksi and Vostochny), as well as Norilsk Nickel (port of Dudinka). Other icebreakers serve in the Baltic, the Black Sea, the North and the Far East. 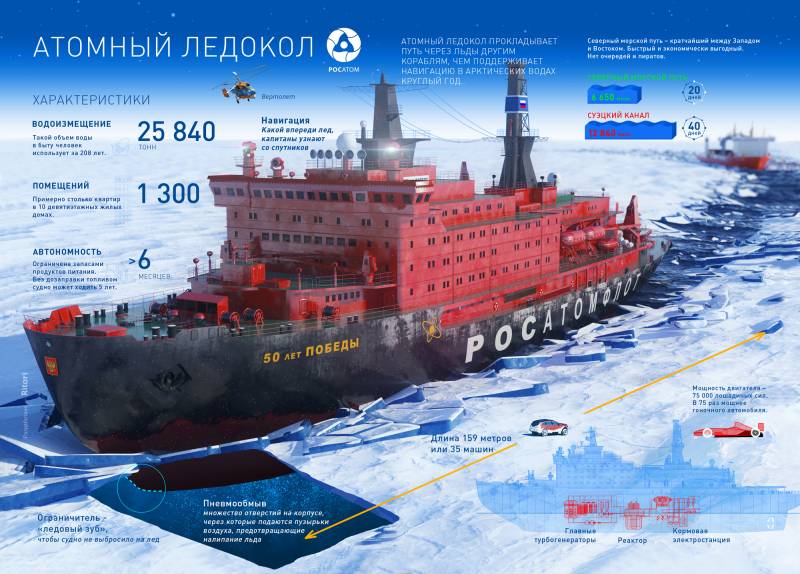 Infographics on the ship "50 years of Victory." Figure Rosatom / rosatom.ru
In the first half of the eighties, Finland built three Mudyug-type icebreakers. Now they serve as part of Rosmorport, based in St. Petersburg, Arkhangelsk and Vladivostok.

In 2008-2009 Rosmorport received two vessels, pr. 21900 - Moscow and St. Petersburg, built by the Baltic Shipyard. Both icebreakers are attributed to St. Petersburg. In 2015-16 the icebreaking fleet in the Baltic Sea has replenished with three units of pr. 21900M.

The nuclear icebreaker fleet includes four ships of two types. These are the Yamal and 50 years of Victory icebreakers of Project 10520/10521 Arktika, as well as the Taimyr and Vaigach Project 10580. In the recent past, several other atomic icebreakers were in service, but their operation has now been discontinued. 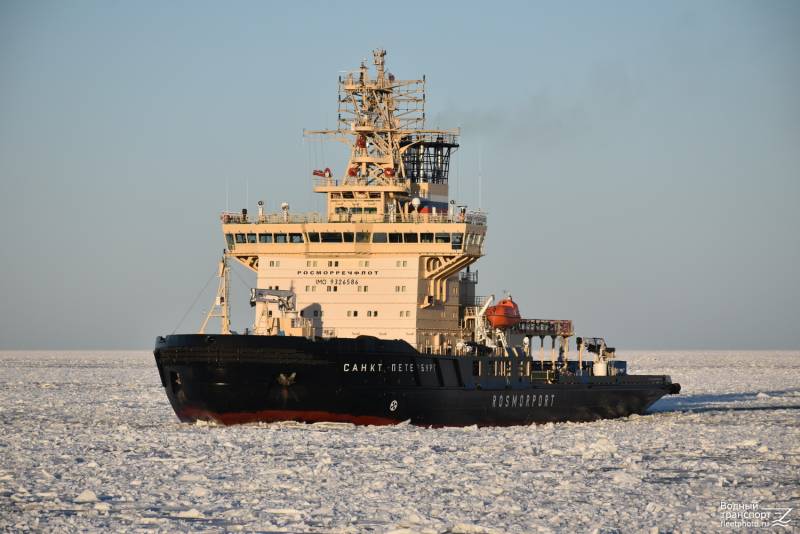 Icebreaker "St. Petersburg" project 21900. Photo Fleetphoto.ru
Recently, the formation of its own icebreaking group as part of the Northern Fleet of the Russian Navy has been ongoing. In 2017, the multipurpose patrol icebreaker Ilya Muromets, pr. 21180, was put into operation. Its task is to escort ships and ships, provide assistance and, if necessary, participate in hostilities.

Ships of the Future

In recent years, part of the atomic icebreakers of Atomflot had to be written off due to moral and physical obsolescence. For their replacement, pr. 22220 / LK-60YA was developed. Several of these vessels are already under construction; there are also plans for further construction.

The main icebreaker, LK-60Ya Ave., Arktika, was laid down at the Baltic Shipyard in 2012. Launching took place in June 2016. In October 2019, the reactor was launched, and since December the ship has been tested. The delivery of the icebreaker to the customer is scheduled for the current year.

The first production icebreaker, Siberia, was built in 2015 and was launched in September 2017. The vessel is not yet ready for testing, but work is ongoing. The expected completion date is 2021. In 2022, it is planned to commission the second serial icebreaker Ural. It was laid in 2016 and launched in 2019. Completion is being carried out. There is a contract for the fourth and fifth icebreakers of the series. Their laying will take place in 2020-21., Delivery - in 2024-26. 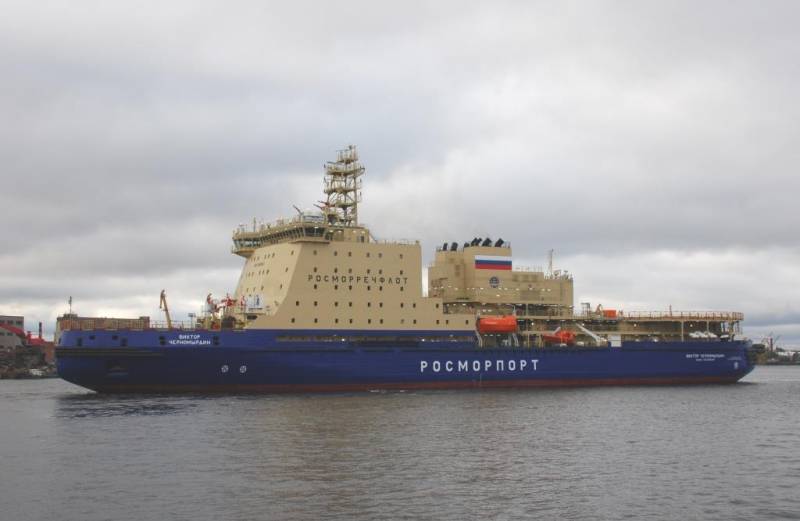 "Viktor Chernomyrdin" goes on trial, October 5, 2019 Photo by Fleetphoto.ru
In 2020, it is also planned to lay the lead ship of the new project 10510 / LK-110Ya / LK-120Ya “Leader”. The Zvezda shipbuilding complex will have to build three such icebreakers in a few years, which are distinguished by enhanced characteristics.

The diesel-electric icebreaker Victor Chernomyrdin ave. 22600 / LK-25 has not yet been handed over to Rosmorport. It was built in 2012 at the Baltic Plant; later the order was transferred to the Admiralty Shipyards. Due to a number of problems of various kinds, the deadlines for the delivery of the ship were repeatedly shifted, and the cost of its construction also increased. Sea trials of the icebreaker began only last fall.

In the interests of the Navy, the lead icebreaker of the updated pr. 21180M is being built. “Evpatiy Kolovrat” was laid at the end of 2018 and so far remains on the slipway. According to some reports, in the future there may appear an order for a second such vessel. Thus, the Navy is rebuilding its own icebreaking fleet, and its vessels are being created taking into account the specifics of military service.

Now Russia has the largest icebreaker fleet in the world. In addition, our country is the only owner of nuclear icebreakers in the world. All this allows us to solve a wide range of economic, scientific, military and other tasks in a number of regions with a harsh climate. The presence of a large icebreaker fleet provides certain advantages, however, its construction and development is rather complicated. 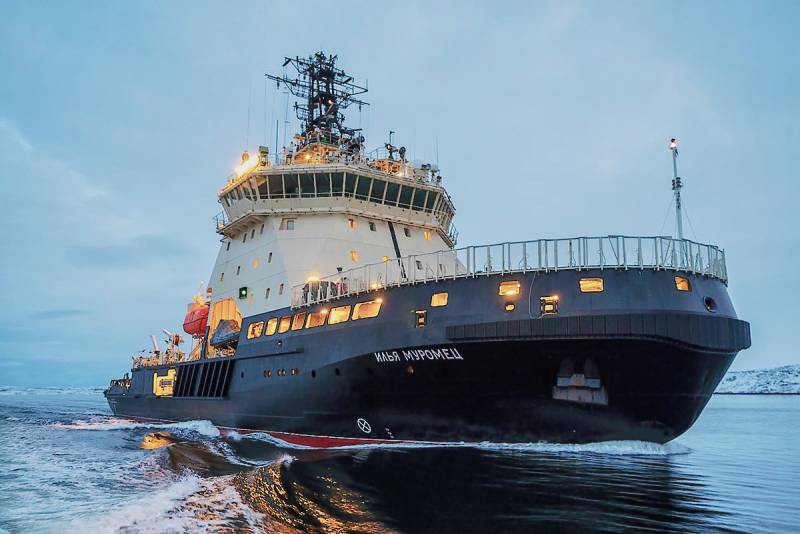 Icebreaker "Ilya Muromets" from the Northern Fleet. Photo by the Ministry of Defense of the Russian Federation / mil.ru
It is easy to see that the bulk of the available icebreakers were built in the seventies and eighties of the last century. With proper maintenance and timely repair, diesel vessels can continue to serve in the future. The situation with the nuclear fleet is different. In recent years, several such vessels have had to be decommissioned and disposed of due to the impossibility of extending the service life.

In fact, the Russian icebreaking fleet needs the systematic construction of new modern ships to gradually replace the existing ones. Similar measures have already been taken in the field of nuclear shipbuilding. In addition to the four nuclear-powered icebreakers, three new ones are under construction in the service, and the same amount will be laid in the foreseeable future.

Similar measures are being taken in the field of non-nuclear icebreakers, however, the most interesting pr. 22600 is constantly faced with various kinds of problems. Because of them, the world's largest diesel-electric icebreaker is still not ready for work. 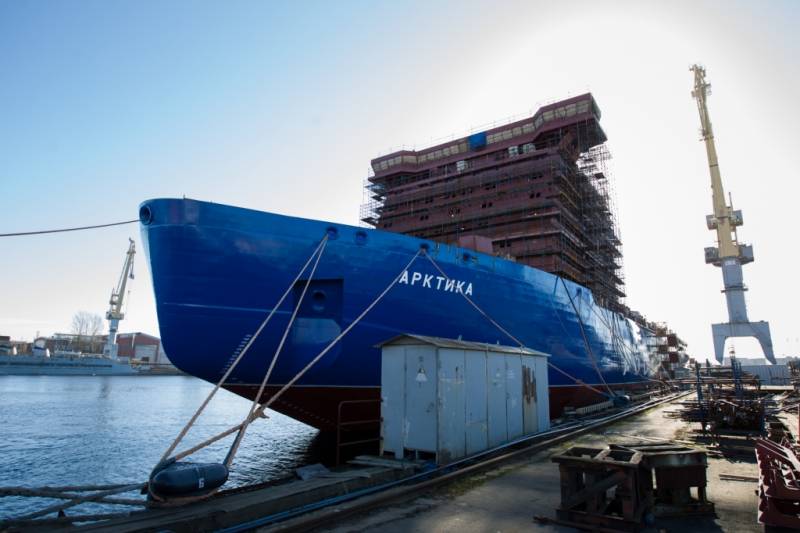 Nuclear-powered icebreaker "Arctic" of the project LK-60YA during completion. Photo "Atomflot" / rosatomflot.ru
Of great interest is the program for the construction of specialized patrol icebreakers for the navy. Icebreakers specifically for the Navy have not been built for several decades, but now the situation is changing. The fleet has already received the lead ship of the new project, and soon the second will be put into operation. The presence of their own icebreakers will reduce the dependence of the Navy on civilian structures, as well as simplify the solution of a number of military tasks.

In general, the state of the domestic icebreaker fleet gives rise to optimism. Cash vessels cope with their work, and in the near future new ones will be added to them. There are some problems and shortcomings, but they do not have a special effect on the general situation. As a result, four dozen Russian icebreakers solve their tasks, providing economic and military activity in regions with a harsh climate.

We are in Yandex Zen
Construction of the first Soviet Arctic icebreakers
How many icebreakers do Russia need?
35 comments
Information
Dear reader, to leave comments on the publication, you must to register.