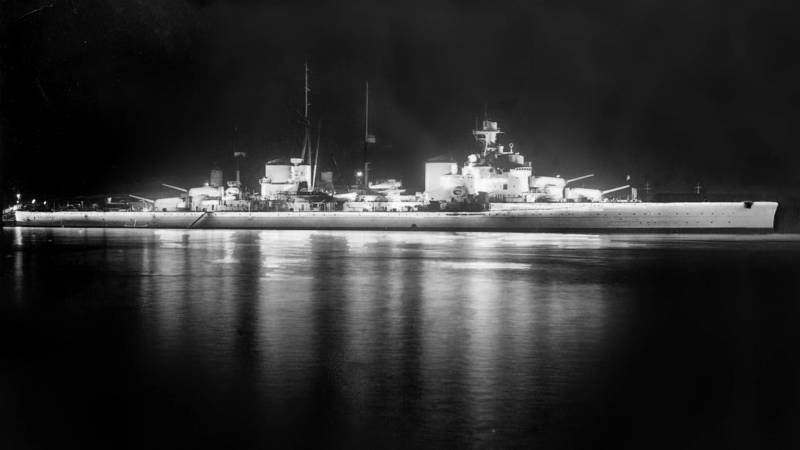 A strange feeling from this ship. It seems like working on errors, but there are even more errors than in work. They began to build the ship after the cruisers of the Zara project, but completely without taking into account the experience of building and operating ships. Bolzano rather turned out as a return to Trento, and there is a logical explanation for this.


On the one hand, two Trentos and four Zaras are quite normally divided into two, that is, two divisions of heavy cruisers. In fact, five, because the cruiser "Paul" was originally designed as the flagship of cruising (but in fact it was an acting linear) fleetso I definitely needed another ship.

Separation, albeit minimal, existed among the Italian heavy cruisers. Trento were easier and a bit quicker. Therefore, a ship was needed to match it. Therefore, Bolzano was planned as the third in a pair to Trento and Trieste. But with improvements, since the Zary had already been built by then. 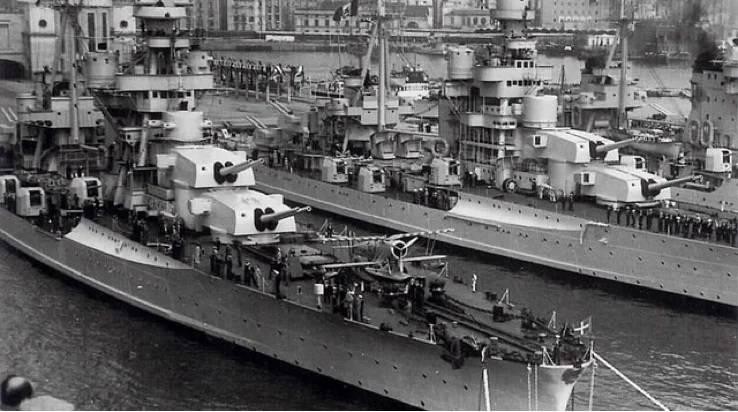 The priority of the design was speed, and they did not play with a displacement like that of Zara. But they began to facilitate the ship wherever possible. The result was a "Trento" with a front superstructure, powerplant and weapons from the "Zara".

We also revised the survivability control system. The reservation was left like that of Trento. Reduced ammunition, both the main caliber and the auxiliary.

The main caliber of the cruiser consisted of eight 203-mm guns of the 1929 model, similar to those installed on cruisers of the Zara type. 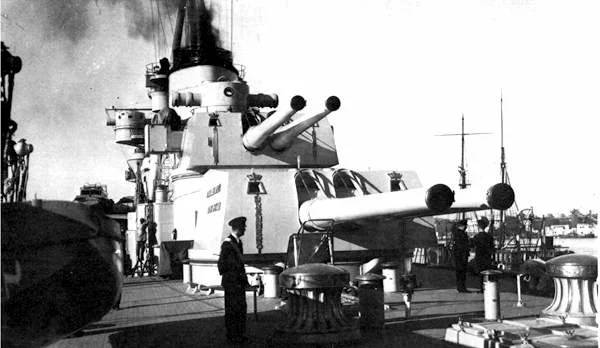 Unlike the Zara cruisers, torpedo weapons for the sake of relief were not eliminated. Eight 533-mm units (four two-pipe units) placed in the same way as on Trento-class cruisers.

With a catapult located on the bow in front of the main-caliber tower, adopted on Italian large ships in the 1920s, they were still tormented by the Trento. Therefore, at Bolzano it was decided to apply a different solution. The cruiser was equipped with a Gagnetto rotary ejection system, which was placed between the chimneys on the boat deck and could be rotated at a certain angle (up to 30 ° on each side) from the diametrical plane. 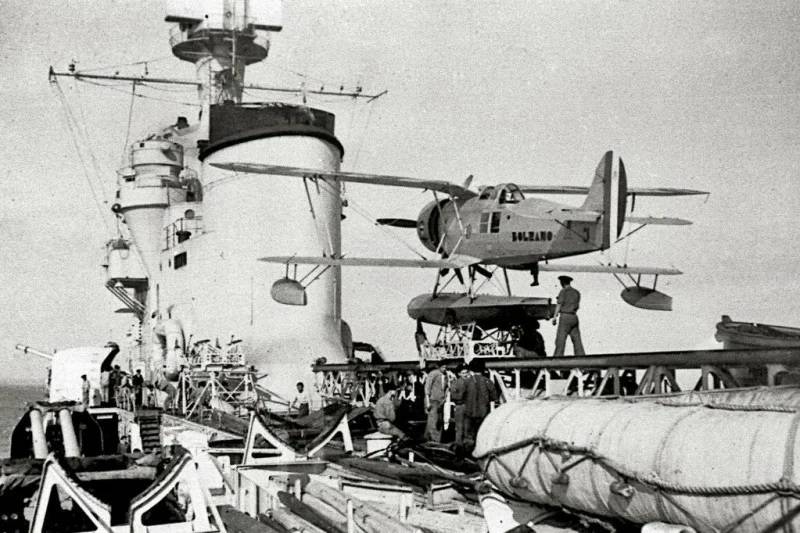 Aircraft were mounted on a catapult and rose from the water with the help of an arrow, which was abandoned at Dawn altogether. The arrow was attached to the base of the main mast. According to the project, the cruiser was supposed to take three aircraft. The hangar was no longer provided at all, so one plane was stored directly on the catapult, and two more - on special sites on the sides of the front pipe. In reality, the cruiser carried no more than two seaplanes. 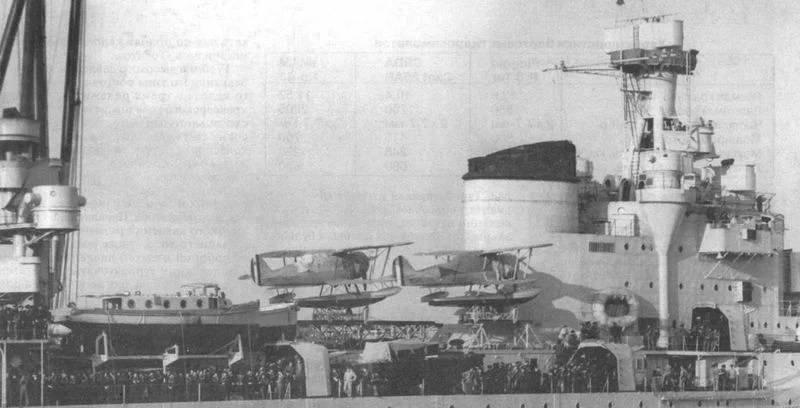 Initially, the Piaggio P.6ter was located on the cruiser, and in 1937 they were replaced by IMAM Ro.43.

In the process of service, anti-aircraft artillery was constantly improved, all heavy cruisers were constantly equipped with air defense systems, following the development aviation. 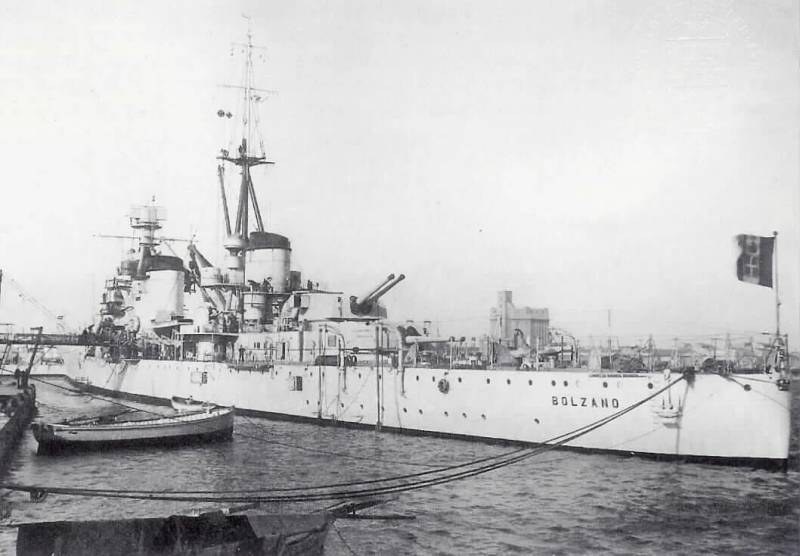 Together with the obsolete and useless 40-mm machine guns from the main mast were removed the fire control tower of the auxiliary caliber fire. Instead, manual 1,5-meter rangefinders began to be used. At the same time, the rangefinders were installed on the cruiser in towers No. 1 and No. 4, which made it possible to conduct towering and independently of other towers.

And the latest innovation. Just before the start of the war, two 120 mm "O.T.O." howitzers were added to the cruiser, designed for firing lighting shells (ammunition - 120 shells per barrel). The guns were placed behind the first chimney.

In tests in December 1932, the Bolzano showed a record speed of 36,81 knots. But we were in no hurry to applaud and admire; it was a sin not to disperse like that. The ship lacked artillery, ammunition and fire control devices.

In June 1933, a fully equipped cruiser developed “only” 35 knots. A very good result. However, during the service, a fully loaded ship did not show more than 34 knots. And even such a good speed turned out to be a completely worthless “trick”, since the associates in the heavy cruiser division could not give more than 30 knots.

In terms of combat merit, the Bolzano was no worse and no better than other heavy cruisers. 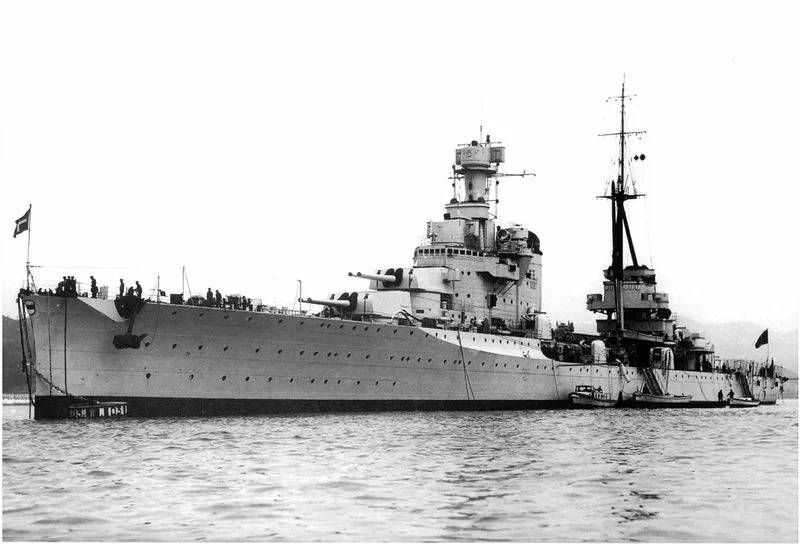 In 1936-1939, he, like almost all the ships of the Italian fleet, provided assistance to the troops of General Franco. In June 1940, when Italy entered World War II, the first operation for Bolzano was to cover a mine-protecting operation. The cruiser participated in two exits to intercept the enemy fleet, but the matter did not reach the battle due to the absence of the enemy.

July 9, the ship took part in the battle of Punto Steelo (Calabria). Bolzano received three 152-mm shells from British cruisers, one of which was removed steering.

After the repair, Bolzano mainly escorted the supply convoys to North Africa.

November 27, 1940 as part of the squadron of cruisers "Bolzano" participated in the battle with the British formation "N". “Bolzano” during the battle had a short fire contact with the battle cruiser “Rinaun”. Here the cruiser’s ability to give full speed with the aim of retreat was definitely useful, since the Rinaun with eight 381 mm guns was not an enemy for the Bolzano. More precisely, the Italian cruiser was not an adversary for the British battlecruiser. As a result, we parted without getting into each other.

The battle at Cape Matapan, fortunately, did not become the last point in the career of Bolzano, and for a long time the cruiser sadly accompanied the North African convoys.

On August 25, 1941, at the northern entrance to Messina, the commander of the Triumph submarine discovered a detachment of Italian ships and decided to attack.

Escort destroyers discovered the “Triumph” and began to drop deep bombs, but Captain Woods managed to trick the Italians, to break away from the destroyers and fired a volley towards the outgoing squadron. And he got into the Bolzano. And he hit well. In the feed compartment. 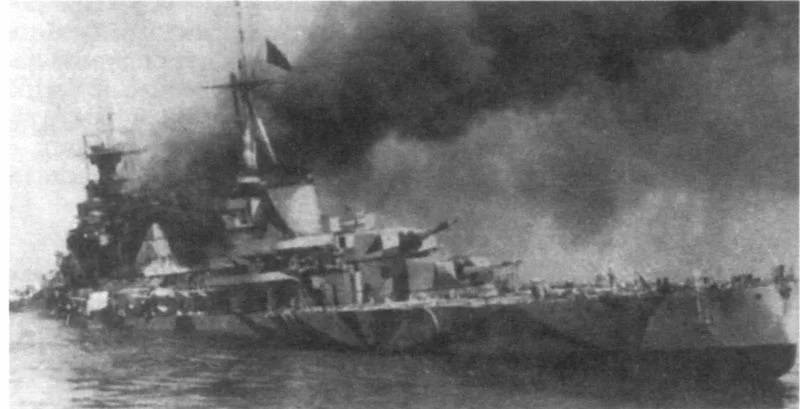 Damage to the cruiser was severe, he completely lost speed, and it was very difficult to control. With great difficulty, the Bolzano was towed to Messina for repairs at a local factory.

In September 1941, British bombers flew in and added half-ton bombs from above. Repair was delayed, and the cruiser returned to the fleet only in the summer of 1942. By this time, the Italian fleet was paralyzed by the “fuel crisis”. Oil was barely enough to ensure daily combat activities.

Only in August 1942 did the Bolzano go to sea in order to disrupt the supply operation of Malta, where the British forces held their last strength. The British command planned and conducted a convoy supply operation from Gibraltar, code-named "Pedestal." The Italians planned a retaliatory operation.

An Italian cruising squadron entered the sea. It included the cruisers Bolzano, Gorizia, Trieste, Eugenio di Savoy, Montecuccoli, Attendolo and 11 destroyers. Their appearance could be fatal for the British convoy, which suffered heavy losses, including in the guard ships from the actions of the German-Italian air squadron. In fact, there was simply no one to fight the Italian cruisers, and the convoy shone the final rout. But at the crucial moment, on August 12, the Italian ships were recalled.

In the literature, this stupid cowardice, similar to the behavior of the Japanese in Leyte Gulf, was well understood, there are many versions. The fact is that “they could, but did not want to” - this is about the Italian naval command. 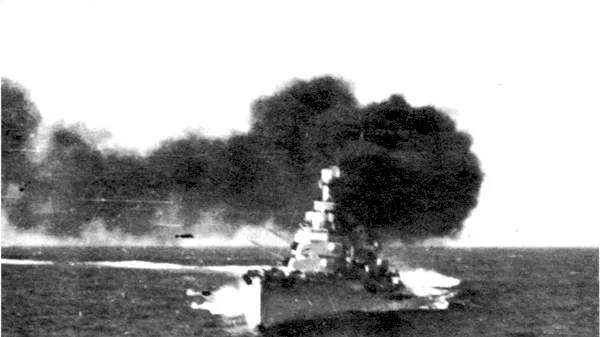 "You do not score - they hammer you." The football principle is quite applicable at this moment. On the way back the Italian squadron was intercepted by small British submarines.

The submarine commander “Anbroken”, having discovered the marching pleasure of the ships of the Italian fleet, prudently missed the destroyers and calmly fired a four-torpedo salvo.

One torpedo hit the cruiser Attendolo, tearing his nose off, the second - Bolzano. An explosion occurred in the area of ​​fuel tanks at Bolzano, a violent fire broke out that threatened the ammunition cellars. The commander ordered the flooding of the cellars.

The fire was extinguished, but there was so much water that the cruiser had to be stranded off the island of Panorea. Two days later, having gathered strength, the water was partially pumped out, the Bolzano was stranded and towed to Naples, where it was repaired in haste. Then they decided to convert the cruiser into an aircraft carrier and drove to La Spezia. 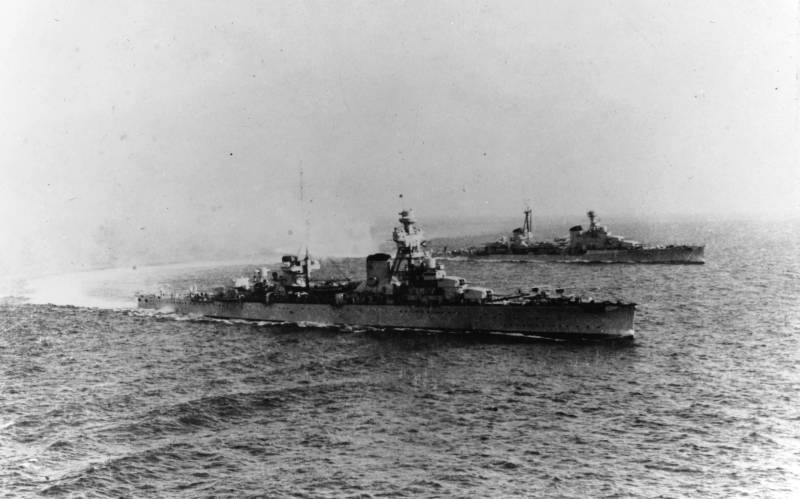 The Italians tried to solve two problems: to create transport for the delivery of fighters to North Africa, and, if necessary, use it as an aircraft carrier. With Bolzano, they planned to cut off all the superstructures, extend the deck, and mount two catapults on the tank.

It was planned to dismantle part of the main power plant, so the power was reduced to 30 hp, and the speed was up to 000 knots.

The armament of the air transport would be 10 anti-aircraft guns 90 mm and 40 machine guns 37 mm. The ship could carry 12 RE-2001 fighters. Fighters would take off from catapults, and landed on coastal airfields.

But they did not begin to work. On September 8, Italy entered into a truce with the Allies, and on September 9, La Spezia was captured by the Germans. "Bolzano" was not even nominally included in the German fleet, it was completely not interested in Kriegsmarine.

However, the Allies had their own thoughts about the cruiser. There were fears that the Germans would be able to flood the ship in the channel and block the harbor of the port.

Therefore, on the night of June 21-22, 1944, the Italian destroyer Grekale and the Italian torpedo boat MAS-74 approached the harbor, two British small combat craft Charriots were lowered from the torpedo boat, the places in which the Italians took and the British.

Having penetrated the harbor, combat swimmers attached four magnetic mines to the bottom of the ship with a delay of 2 hours, and in order to intensify the explosion, they attached a torpedo warhead with a charge of about 200 kg of explosives. At 6 o’clock. 23 minutes there was an explosion, "Bolzano" capsized and sank. After the war, he was still raised and cut into metal.

Bolzano was a good job at Trento's mistakes. The cruiser was more seaworthy, had good habitability, the hull did not “play”, and the speed was just good.

However, as part of the squadron, its 33 nodes were balanced by 30 nodes of the predecessor cruisers. And how many complaints were about the main caliber artillery ...

The ship was not bad, yes, it ran well, but in terms of fighting ... Although, choosing between Bolzano and Zara, I would choose Bolzano. On it one could at least get away from the enemy, since it would be unrealistic to get into an enemy ship anyway.