The sunset of the nuclear triad? Ground and space echelons of SPRN

The advent of ballistic missiles provided strategic nuclear forces (SNF) the ability to strike at the enemy in the shortest possible time. Depending on the type of missile - intercontinental (ICBM), medium-range (BRRS) or short-range (BRMD), this time can be from about five to thirty minutes. At the same time, the so-called threatened period may be absent, since the preparation of modern ballistic missiles for launch takes a minimum of time and is practically not determined by reconnaissance means until the moment the missiles are launched.

The air component is actually weapon first strike, unsuitable for retaliatory and even retaliatory strike. The marine component can be extremely effective in retaliating, but only if securing the deployment and patrolling of strategic missile submarine cruisers (SSBNs) is secured, which can be called into question due to the total superiority of the enemy naval forces (Navy). Worst of all, there is no reliable information about the stealth of our SSBNs: we can assume that their stealth is ensured, but in fact the enemy monitors all SSBNs on alert throughout the patrol route. The ground component is also vulnerable: stationary mines will not withstand the impact of modern high-precision nuclear warheads, and the issue of stealth of mobile ground missile systems (PGRK) is the same as with respect to the SSBN. It is not known whether the adversary “sees” our PGRK or not.

The development of the ground based SPRN component, radar stations in the USA and the USSR began in the 50s after the advent of ballistic missiles. In the late 60s and early 70s, the first SPRN radars came into service in both countries. 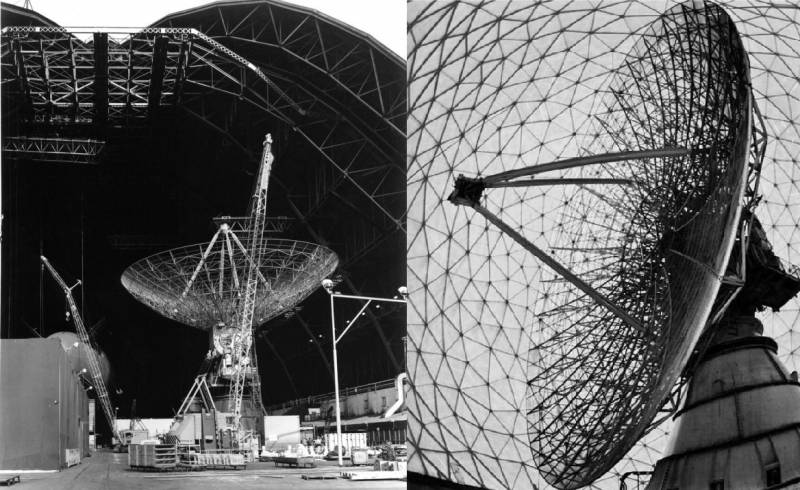 Radar AN / FPS-49 developed by D.K. Barton of the American SPRN
The first SPRN radars were huge, occupied one or several buildings, were extremely difficult to build and maintain, had huge energy consumption, and, accordingly, a significant cost of construction and operation. The detection range of the first SPRN radars was limited to two to three thousand kilometers, which corresponded to 10-15 minutes of flight time of ballistic missiles.

Radar 5N15 "Dniester" SPRN USSR
Subsequently, monstrous Daryal radars were created with the ability to detect a target the size of a soccer ball at a range of up to 6000 km, which corresponded to 20-30 minutes of the ICBM flight time. Two Daryal-type radars were built in the region of Pechora (Komi Republic) and near the city of Gabala (Azerbaijan SSR). Further deployment of this type of radar was discontinued due to the collapse of the USSR.

Receiving and transmitting antennas of the Daryal radar SPRN USSR 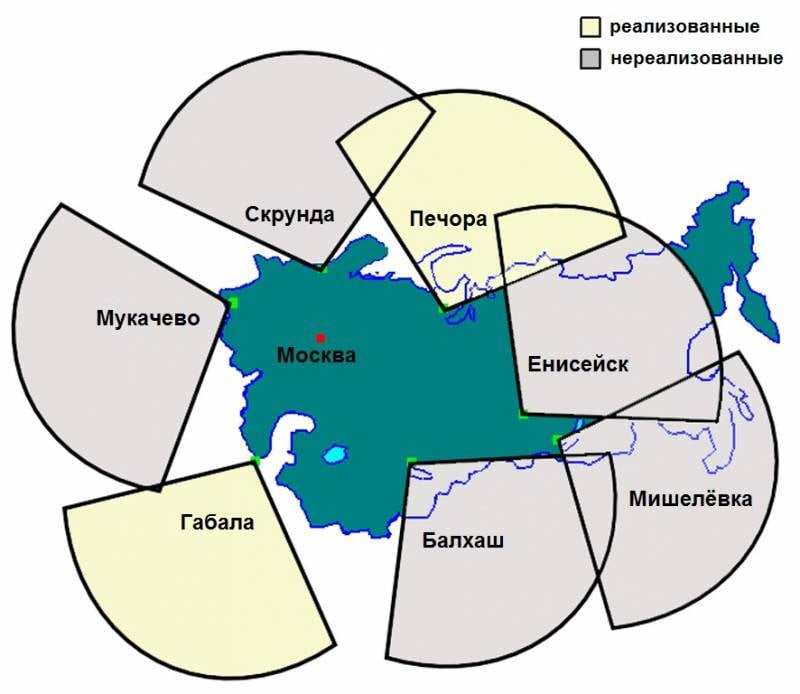 In the Byelorussian USSR, the Volga radar was built, capable of detecting and tracking ballistic missiles and space objects with an effective dispersion surface (EPR) of 0,1-0,2 square meters at a range of up to 2000 kilometers (maximum detection range of 4800 kilometers). 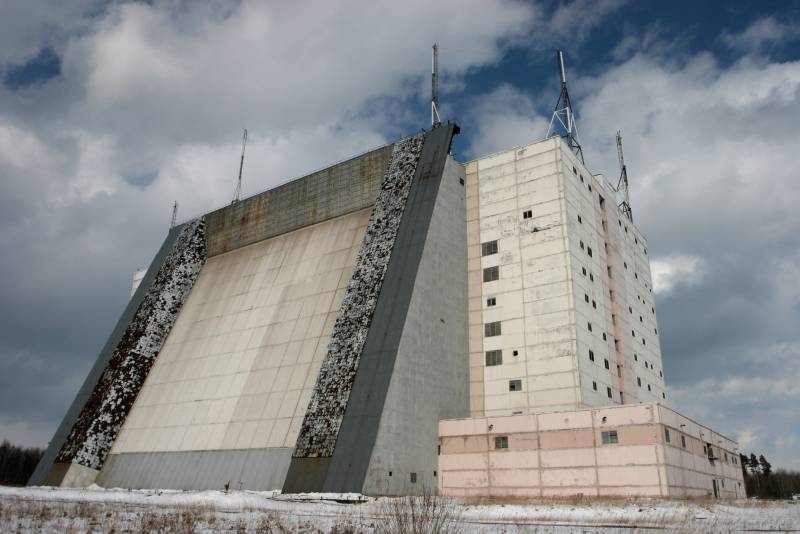 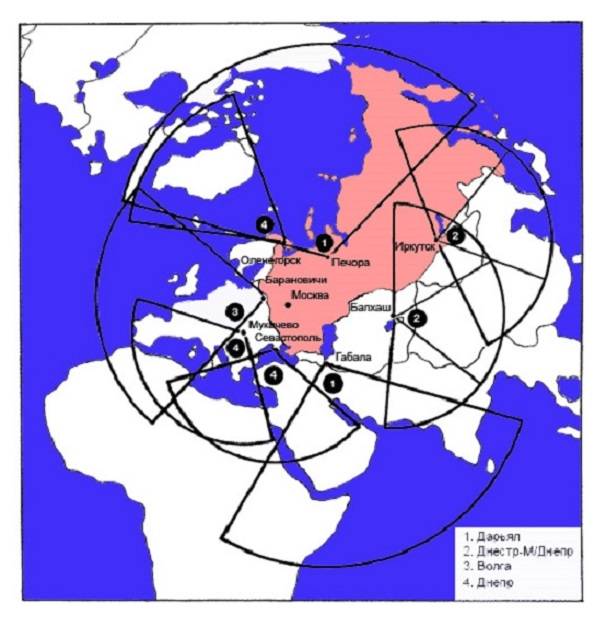 Control zone radar SPRN USSR
After the collapse of the USSR, a part of the radar station continued to work for some time in the Russian SPRN system, but gradually, as relations with the former republics of the USSR worsened and the material part became obsolete, a need arose for the construction of new facilities. 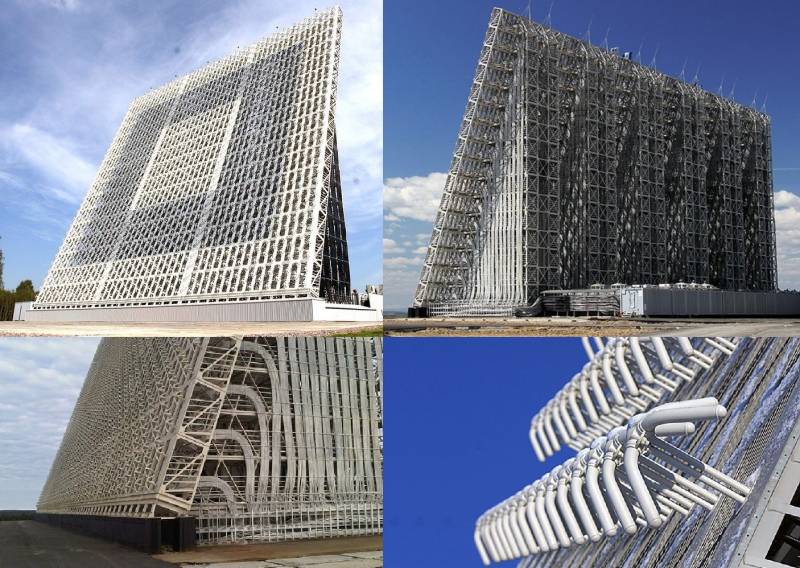 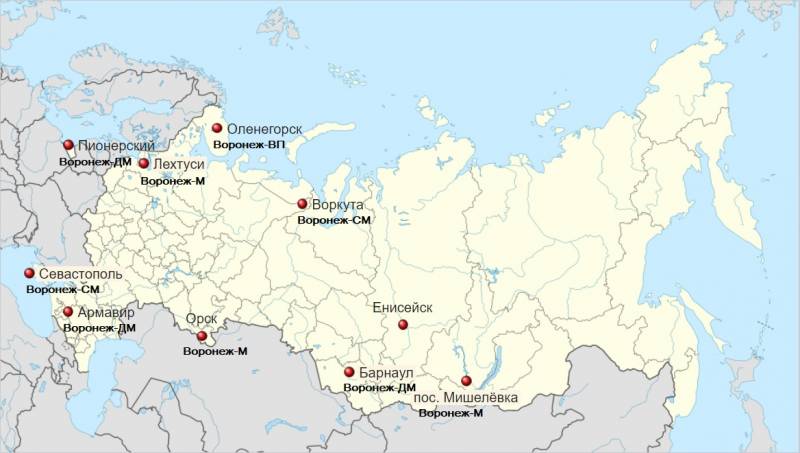 Placement of existing and under construction radar type "Voronezh" 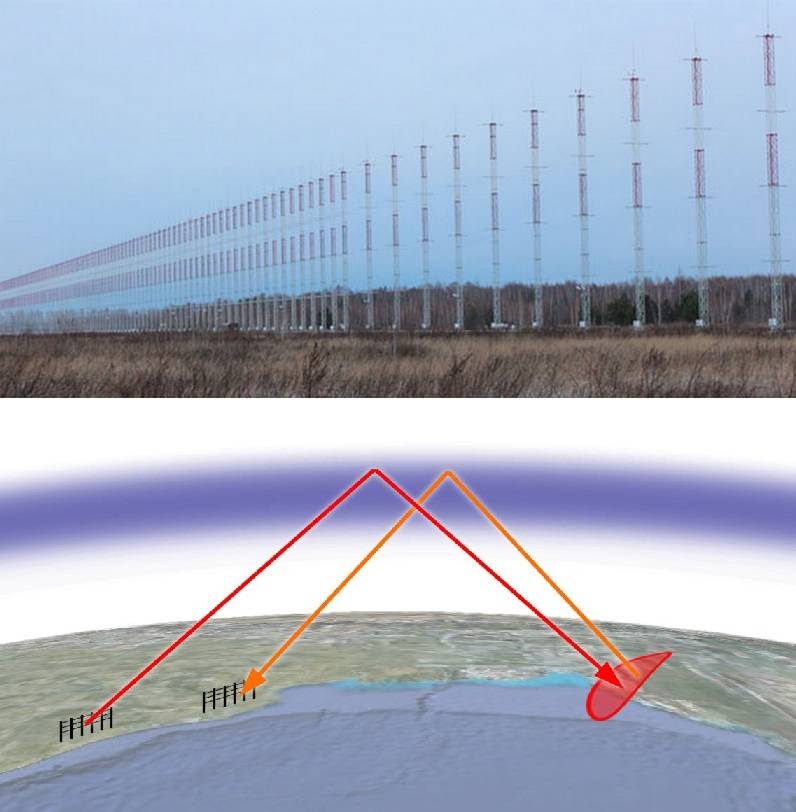 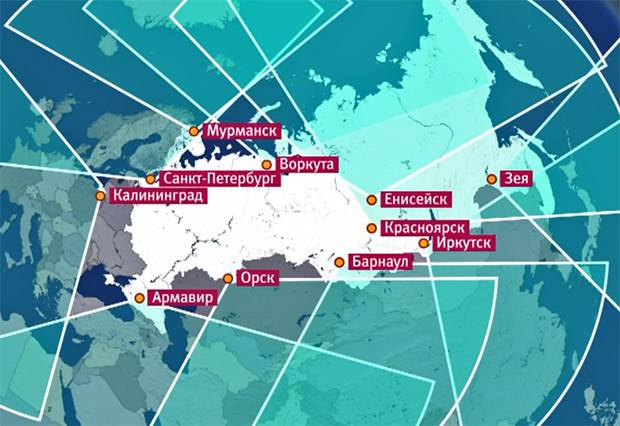 Control zones of the radar SPRN RF
On the whole, the ground level echelon of the Russian Special Forces is actively developing and it can be assumed that its effectiveness is quite high.

The space echelon of the USSR SPRN, the Oko system, was put into operation in 1979 and included four US-K spacecraft (SC) located in highly elliptical orbits. By 1987, a constellation of nine US-K satellites and one US-KS satellite, located in a geostationary orbit (GSO), was formed. The Eye system provided the ability to control missile-hazardous areas of the United States, and due to the highly elliptical orbit and some possible patrol sections of American nuclear-powered ballistic missile submarines (SSBNs). 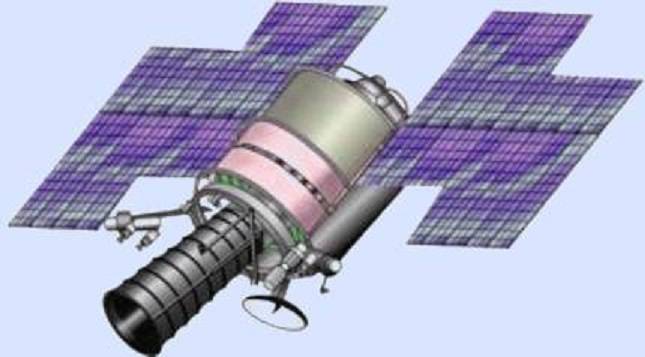 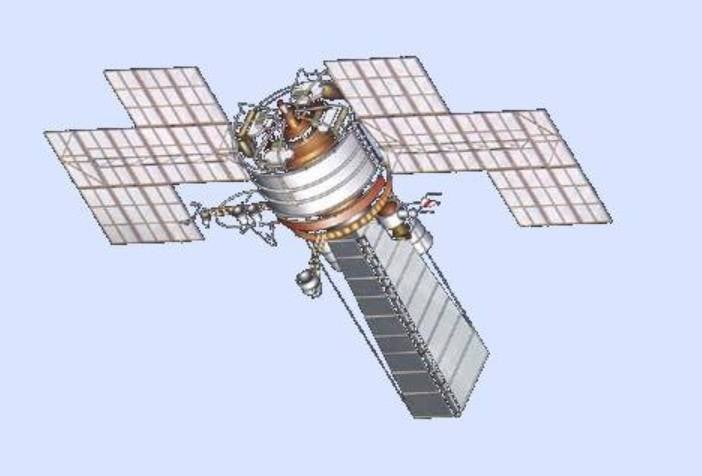 US-KMO 71X6 satellite of the Eye-1 system
In 2015, the deployment of the new Unified Space System (CEN) Tundra began. It was assumed that ten satellites of the CSC “Tundra” will be deployed by 2020, but the creation of the system was delayed. It can be assumed that the most important obstacle to the creation of the Tundra CSC, as in the case of satellites of the Russian global navigation satellite system (GLONASS), was the lack of domestic space-based electronics, while imposing sanctions on foreign components of this type. This problem is complex, but quite solvable, moreover, it’s just suitable for space electronics that seem to be optimally suitable, like the existing technological processes in the Russian Federation of 28 and more (65, 90, 130) nanometers. However, this is a topic for another discussion.

It is assumed that satellites 14F112 CEN "Tundra" will not only be able to track the launches of ballistic missiles from the ground and water surface, but also calculate the flight path, as well as the area of ​​impact of the enemy’s ICBMs. Also, according to some reports, they should give preliminary target designation to the missile defense system and ensure the transfer of commands for a retaliatory or retaliatory counter-nuclear strike.

The exact characteristics of the KA 14F112 CEN Tundra are unknown, as is the current state of the system. Presumably satellites of the CSC “Tundra” operate in test mode or are mothballed, the final terms for the deployment of the system are unknown. Most likely, the space echelon of the SPRN of the Russian Federation is currently practically not operational.

The country's leadership pays considerable attention to the development of the Russian Federation of Socialist Development. The ground level SPRN is actively developing, radars of various types are being built. Almost circular control of missile-hazardous directions was provided in the part of detecting high-altitude objects (ballistic missiles) at a range of up to 6000 km, ZGRLS detections of low-flying targets (cruise missiles) at a distance of up to 3000 km were built.

At the same time, the space echelon of the SPRN does not seem to be functioning or is operating in a limited mode. How critical is the absence of an SPRN space echelon?

The first most important criterion for an SPRN is the time during which an enemy strike is detected. The second criterion is the reliability of the information provided to the country's leadership for deciding whether to retaliate. 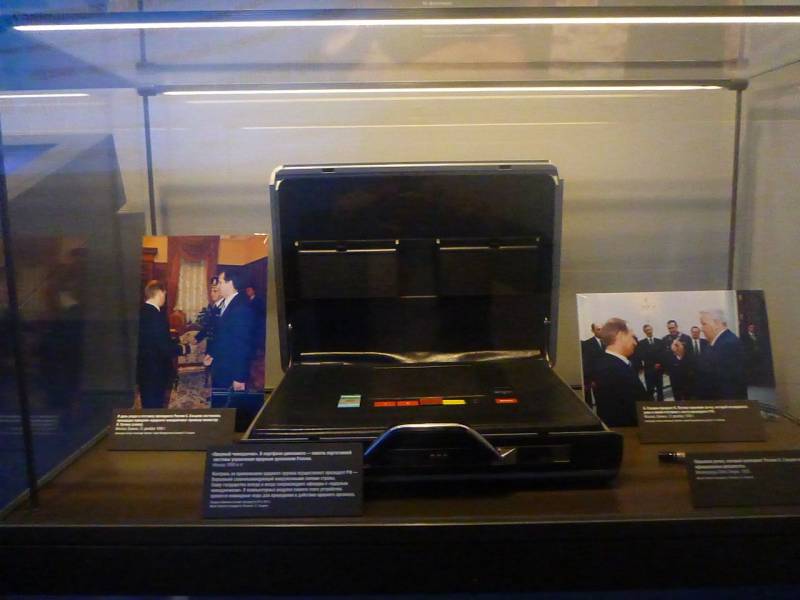 Nuclear case of the Kazbek system
It is unlikely that the enemy will decide on a sudden disarming strike on any one component, for example, a control and decision-making system. Most likely, the task will be to destroy all components of the strategic nuclear forces with multiple overlapping - the stakes are too high. By the way, the Perimeter system, also called the Dead Hand, is not considered in the article for this reason: there will be no one to give the command if all carriers are destroyed during the attack. 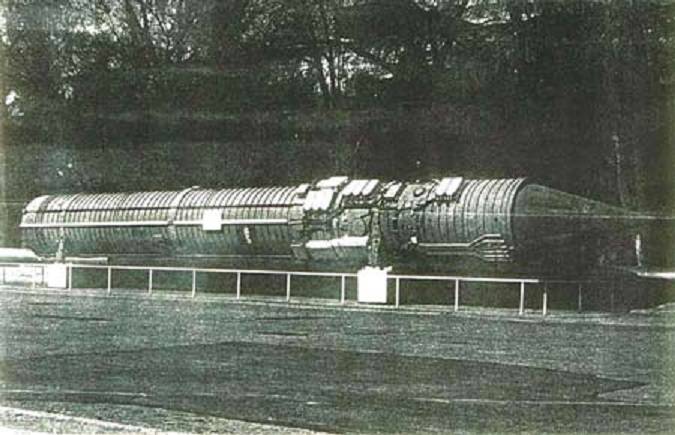 Command missile 15А11 of the Perimeter system
Regarding the first criterion, the time during which an enemy strike will be detected, the space echelon is an essential element of the SPRN, since the rocket engine will be seen from space much earlier than the missiles enter the coverage area of ​​ground-based radars, especially when providing a global view of the space echelon of the SPRN .

Regarding the second criterion, the reliability of the information provided, the space echelon of the SPRN is also critically important. In the event that primary information is received from satellites, the country's leadership will have time to prepare for striking and delivering / canceling it if the fact of striking is confirmed / refuted by the ground level SPRN.

The practice of "do not put all the eggs in one basket" is quite applicable to SPRN. The combination of satellites and ground-based radars allows you to receive information from sensors operating in fundamentally different wavelength ranges - optical (thermal) and radar, which virtually eliminates the possibility of their simultaneous failure. At the moment, there is no information about whether the enemy can affect the operation of the SPRN radar, but such work may well be conducted. For example, offhand it can be assumed that the HAARP project, one of the invariable objects of conspiracy theory enthusiasts, or its analogues, may well be used not only to study the ionosphere, but also be considered as a means of reducing the effectiveness (read: detection range) of the SARS radar, first of all turn ZGRLS, the principle of operation of which is based on the reflection of radio waves from the ionosphere. Or used to explore the possibility of creating systems that can do this. 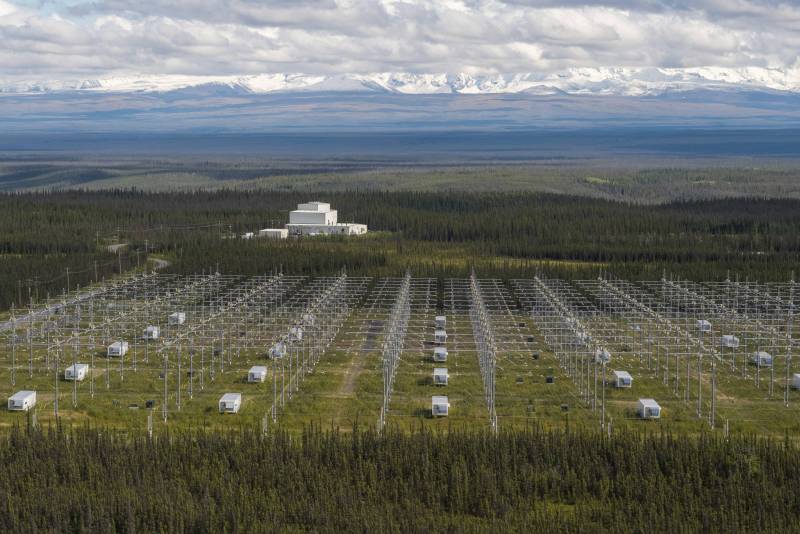 HAARP Antennas
Thus, the space echelon of the SPRN is extremely important, it provides both a margin in time for making a decision and increases the likelihood of the country's leadership making the right decision to launch or cancel a retaliatory nuclear strike against the enemy. Also, the space echelon significantly increases the stability and survivability of the SPRN in general.

We are in Yandex Zen
The sunset of the nuclear triad? Air and ground components of strategic nuclear forces
An-12 in Afghanistan
75 comments
Information
Dear reader, to leave comments on the publication, you must to register.