In Kiev, they are looking for a “Russian footprint” in the disaster of the Ukrainian Boeing near Tehran 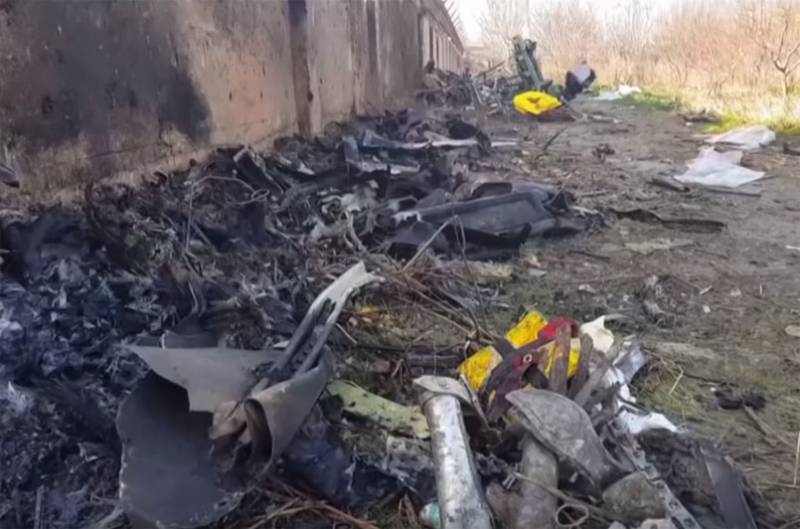 Before the Iranian authorities extinguished the flames at the crash site of the Ukraine International Airlines airliner, in Kiev propagandists of all stripes began to search for a “Russian trace” in the tragedy that had happened.


Disputes and gossip about a missile attack

However, the external background is quite favorable. In Washington, ahead of the investigation, they hastened to announce that the “Boeing 737-800 of Ukraine’s International Airlines, which crashed near Tehran, was probably accidentally shot down from the Iranian Tor-M1 anti-aircraft missile system."

This was cited by a representative of the Pentagon, who in turn referred to data from American and Iraqi intelligence, the British agency Reuters reported on Thursday, followed by the weekly Newsweek. Having created a “sensation”, the publications did not deny themselves the pleasure of issuing their own version of the tragedy, where the “accidental hit of a rocket” was already closely adjacent to the “intentional” one. (Allegedly, the Pentagon is considering both of these options.)

It should be noted that a possible missile attack on a civilian liner was talked about right after the disaster, when the first videos from the scene of the tragedy appeared. Some "experts" saw on the fragments of a fallen glider "traces of the striking elements of an anti-aircraft missile warhead."

According to him, after the engine ignited, the UIA liner made a turn towards the airport. In addition, at the same time as the Ukrainian Boeing, "at the same height at that moment there were several more passenger airliners." So "a missile attack on an airplane is impossible from a scientific point of view."

In Ukraine, few heard Abedzade's explanations. Local social networks are already full of evidence of a missile attack. Among them were “eyewitness accounts”. According to anonymous sources, a message began to go around the sites that the flight attendant of flight PS 752 Tehran-Kiev Ekaterina Statnik managed to call her relatives in Novaya Kakhovka and say that the plane was fired, after which the connection was cut off.

Further more. The post-Maidan propagandists who know the Cyrillic alphabet found familiar words in the message flow - the Tor-1M anti-aircraft missile system. From this, Russia's involvement in the death of the Ukrainian plane was determined.

Such a conclusion with formal logic has little in common. It is more like the proverb that is close to Ukrainian experts: “In the garden of elderberry, and in Kiev, uncle.” But the logic in the Ukrainian capital has not been held in high esteem for a long time, but the “uncle,” as they say, was at the right time and in the right place.

Secretary of the National Security and Defense Council of Ukraine Aleksey Danilov voiced to the media the priority versions of the tragedy that his department is leaning towards. In the first place - “The defeat of an aircraft by an anti-aircraft missile system of an air defense missile system, including the Tor air defense missile system, since information about the detection of fragments of a Russian missile near the crash site has already appeared on the Internet."

Danilov said that the State Commission of Ukraine for the investigation of the crash has already arrived in Tehran. It consists of 45 people - representatives of 12 ministries and departments. The commission “includes specialists who take part in the international investigation of the attack of Russian troops on the Malaysian Boeing MN-17 on July 17, 2014 in the airspace of Ukraine”.

So the anti-Russian interpretation of the great human tragedy that happened in the Iranian sky received official support from the Ukrainian authorities. Local experts argued over what caused such a U-turn in discussing the causes of the disaster with UIA's Boeing. They agreed: it is the opposition that is putting pressure on President Vladimir Zelensky, who has embarked on a rapprochement with Russia.

It’s hard to agree with that. Maybe the opposition has saddled social networks, but Alexei Danilov is still an official of the state structure subordinate to Zelensky. So the thing is different. Most likely, Ukrainian propaganda can no longer function without "anti-Russian lubrication." Now she had a chance (albeit on a big tragedy) to revive her failed mechanism. At the same time, once again serve the overseas patron, covering with a new "hot topic" the bandit murder by the Americans of a charismatic Iranian general.