Robot or manipulator? Status not defined! 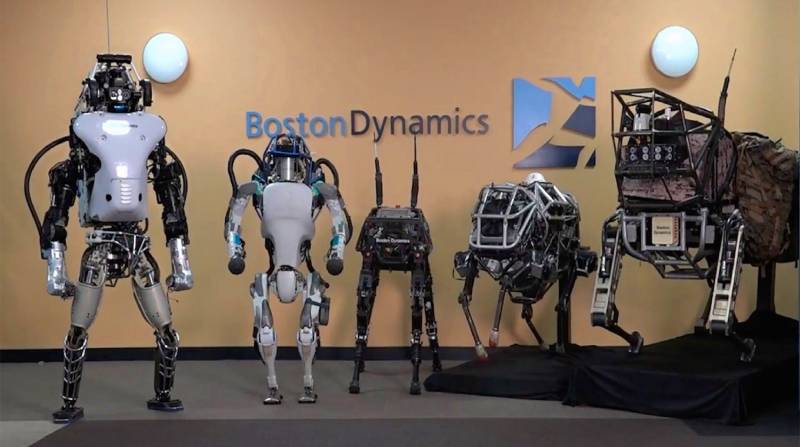 If we take the starting point of the MSTU named after N. E. Bauman, one of the most authoritative scientific institutions involved in the development of robotic systems, including defense, then it turns out that there are at least ten (!) Different understandings of the term “robot”. And that's not counting the classic definition authored by Harry Domin, chief executive officer of Rossum Universal Robots, who has proclaimed that robots are technical devices that reproduce human actions. Moreover, they must have systems for obtaining, converting energy and information. 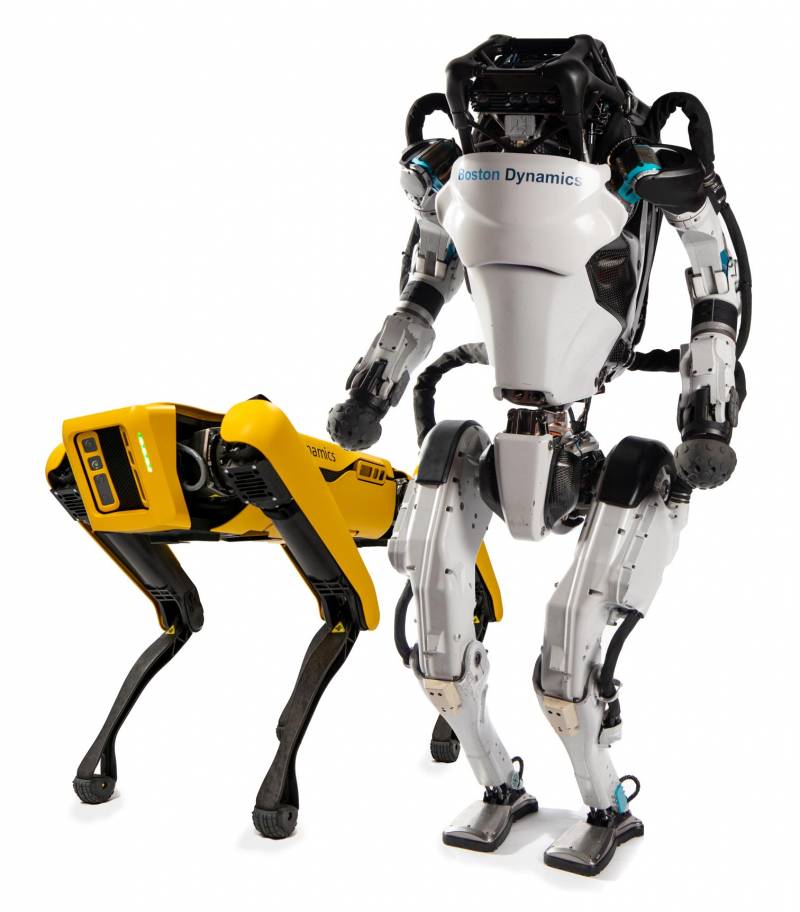 To be precise, this term belongs to the Czech writer Karel Čapek, who invented the character of Domin for the play “RUR” back in 1920. It is important that initially all robots had to be necessarily smart and anthropomorphic, that is, similar to humans. Webster’s English Dictionary very clearly in this regard characterizes the robot as an automatic device resembling a human form and performing functions usually inherent in a person or machine. And it is not difficult to find a decent job for such a technique - to replace a soldier on the battlefield or, in extreme cases, become a personal guard. A typical example of an ideal combat robot is the protagonist of the following video:


This, of course, is a skilfully shot parody that refers us to the modest achievements of Boston Dynamics, a product that so far can only do this:


In general, human-like (or dog-like) robots that are widespread in the world so far are very far from the classical understanding of the Czech term “robot”. And Boston Dynamics products, as it has now become clear, are not particularly needed by customers - for the most part, equipment remains in the status of a technology demonstrator.

But back to the problem of identifying robots. After Chapek, these devices began to be treated as

“Automatic machines, including a reprogrammable control device and other technical means ensuring the performance of certain actions characteristic of a person in the process of his labor activity”
.
Very broad definition! In this way, you can even rank a washing machine as a robot, not to mention complex industrial manipulators such as KUKA.

So all the same robots or manipulators? In foreign technical literature, everything is mixed: robots are called

“A reprogrammable multifunctional manipulator designed to move materials, parts, tools or specialized devices through a variety of programmable movements to perform a wide range of tasks.”
Mentioning nothing of the rudiments of artificial intelligence, autonomy, and self-learning, which are now spoken about from almost every iron. Much more complicated and, it seems, closer to the truth, the following definition of the concept of "robot":

"A programmable autonomous machine capable of moving objects along a trajectory with a large number of points."
At the same time, the number and characteristics of these points should be easily and quickly changed by reprogramming; the duty cycle of the machine should begin and continue depending on external signals without human intervention. This, by the way, is very similar to robotic systems for autopilot cars, which will be discussed below. The engineers themselves and researchers of MSTU. N.E. Bauman stopped (at least for now) on the following cumbersome definition of a robot:

"A universal reprogrammable or self-learning machine, controlled by the operator, or acting automatically, designed to perform instead of a person diverse tasks, usually in a priori unknown conditions." 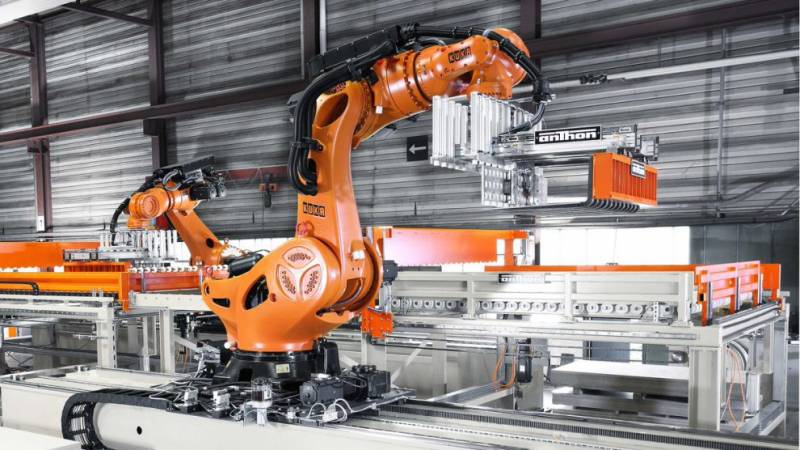 Have you read? It is clear that MSTU rightly decided not to complicate their work and simply mixed robots and industrial manipulators with their strictly “learned” actions, Lego Mindstorms school kits, and artificial intelligence systems, for example, engaged in court proceedings in the USA.

There is a simpler, but no less paradoxical definition:

“A robot is a mechanism, system or program that perceives, thinks, acts and communicates”
.
Again, with the modern development of the Internet of things, when refrigerators that are no worse than cell phones can think in their own way, a lot of gadgets fit this concept of a robot. Further study of robotic scholasticism leads us to options such as

“A robot is an artifact that functions autonomously.”
Here even a balloon filled with helium fits the description of the robot. Or like this:

“A robot is a machine (more precisely, an“ automaton ”) whose behavior looks reasonable.”
The helplessness of such a formulation is obvious. For each person, the criterion of rationality is different. For one individual, a new-fangled crossover that automatically slows down before a child runs out onto the road is already the pinnacle of reason, especially if this child has been saved. And for the second, the automatic landing of the Buran ship will not create the impression of rationality. It seems that even the classic statement of the American engineer and inventor Joseph Engelberger (1925-2015), who is often called the "father of robotics", gradually loses its meaning:

"I can’t give a definition to a robot, but I will definitely recognize it when I see it."
.
With such a vague term, Engelberg would not recognize modern robots - they become simply indistinguishable from "nerobots."

Actually, due to such confusion regarding robots in the modern world, it seems that they do not know what to do with them in the future. No, of course, with respect to various smart gadgets that simplify our lives, everything is clear: here they seriously and briefly captured our future. But answer yourself honestly: would you buy yourself a plane ticket in which there are no pilots? Imagine an aircraft with several hundred passengers operating most of the route autonomously, and only on take-off / landing, operators from the ground act as pilots. Currently, technology allows this, but does not allow public opinion. As it does not allow to introduce full automation of road transport management. But there are conditions for this. Parts of the A9 Berlin - Munich highway several years ago were experimentally converted for autonomous vehicles of the fourth and even fifth level of automation. That is, on this autobahn a suitably equipped car can move completely automatically - the driver can just sleep or talk peacefully with fellow travelers. And, by the way, outwardly such a robomobile will not differ much from a car in the classical sense. Why aren't we implementing it? The whole problem is the responsibility for the outcome of possible accidents both on the ground and in the air. Recall how much noise the deadly crashes of unmanned Uber and Tesla moving off-line caused. It would seem that thousands die on the roads every hour around the world, but death from artificial intelligence is perceived especially sharply. At the same time, public opinion does not want to hear that even the partial introduction of unmanned vehicles will save thousands of lives. Society cannot get along with the idea that it will be man, not artificial, who will solve the notorious “trolley problem”.

What is the essence of the problem? Philip Foote, a British philosopher, formulated it back in 1967, much earlier than the appearance of drones:

“A heavy uncontrolled trolley is carried on rails. On its way there are five people tied to the rails by a crazy philosopher. Fortunately, you can switch the arrow - and then the trolley will go in a different, alternate way. Unfortunately, there is one person on the siding, also tied to rails. What are your actions? ”

Some Cognitive Technologies Research Findings
In solving such problems, one can rely on public opinion, as was done in the Russian Cognitive Technologies, when in 2015 they worked on a project of an autonomous KamAZ. Respondents were offered test tasks “What should an unmanned vehicle do?” With several solutions. As a result, moral recommendations were developed for the algorithms of future unmanned vehicles. But there is one catch: only 80 thousand people from Russia took part in the survey, and this is only about 0,05% of the country's population. This part of society will decide who lives and who dies?

In aggregate, this is precisely why, despite the inevitability of a robotic future, we do not even know approximately what it will be. And largely due to the fact that we can’t imagine what a robot is!

We are in Yandex Zen
Fighting robots in future wars: expert conclusions
Giant leap in robotization
67 comments
Information
Dear reader, to leave comments on the publication, you must to register.