The Battle of Yorktown: Newborn America 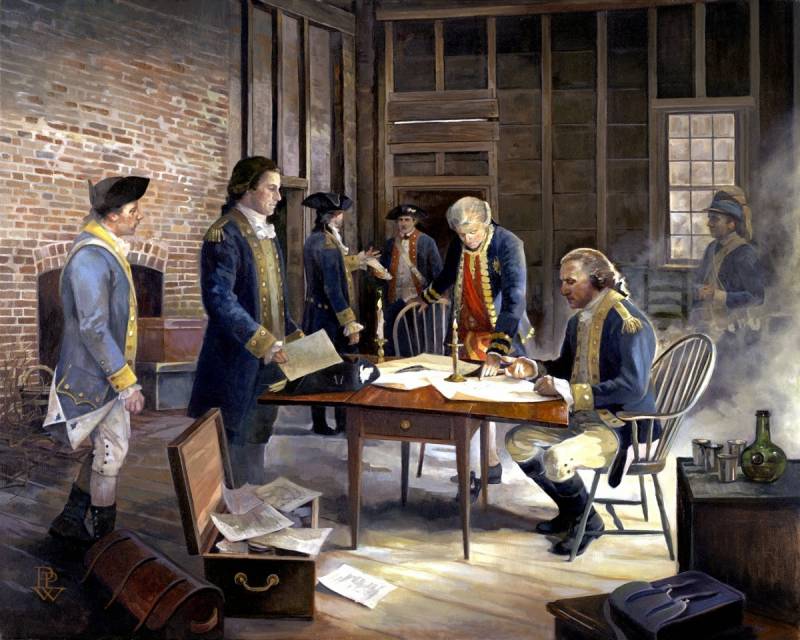 
The war for US independence proceeded within the framework and canons of the XNUMXth century. The British had a generally unfriendly (and large) territory. And a relatively "compact" land, but professional tactically contingent. A large empire of troops was not to attack. The era of huge armies, although it was close, has not yet come.

Tactical skill (discipline, drill, finely tuned army system as a whole) was compensated by strategic incompetence. It was difficult to blame the British for this. Until now, they dealt either with the same compact professional armies of great powers or with feudal territories, which easily succumbed to the tried-and-true “divide and conquer”, or even outright savages.

In America, they are faced with a modern nation that has reached a high level of ideological consolidation. Therefore, no matter how the British did not defeat the American armies, others came in their place. At the same time, the Americans, although inferior to the professional army of the empire, were plus or minus at the same technological and social level. And the whipping boys were not.

As a result of this, the British did not just all the time feel themselves in alien hostile land. They still could not put themselves in order because all the time they could be attacked by the modern troops, organized according to the European model, of the 13 colonies.

By this time, both Americans and the British were pretty tired of the raging war since 1775. But a few years ago, the French also joined the fighting parties, seeking to avenge Britain for the Seven Years' War. Anyway, to spoil the British - this, in any case, was a holy cause.

If the British had not urgently come up with something clever, the war would sooner or later end in defeat.

At first, this “smart” was an attempt to enlist the support of loyalists from the southern colonies. The British sent serious contingents there - to support the "friends", and with their help put the South under tight control, and then go to the centers of rebellion in the north. But it didn’t work out - the Americans actively acted in the region, and at the same time, although they were beaten several times, they did not allow themselves to be completely defeated. Loyalists did not have to become an influential force - they were actively cut by local patriots, thus leveling this potential problem.

At first, the British tried to gain a foothold in both Carolina. But, having failed for the above reasons, they rolled back to Virginia. Frustrated by the collapse of hope, the British did not particularly know what to do. Then, sitting in occupied New York, General Clinton ordered the commander of the British ground forces in the south, Charles Cornwallis, to organize a naval base in the Chesapeake Bay.

Cornwallis chose Yorktown as such, located on the York River - the place was quite convenient. Let the British could not control the land. But at least they will strengthen their traditional patrimony - the sea. On August 2, English forces began to land in the cities.

True, in the event of the appearance of serious enemy forces on this very sea, the just organized base could become for the 9-strong Cornwallis army no more than a big trap.

For some time, British naval superiority in American waters was overwhelming. But back in March 1781, a large fleet under the command of Admiral de Grasse left the French Brest. He went to 13 colonies of the West Indies, relatively close to the coast, - for the French there were many tidbits that could be taken away.

As for the American-French land forces, in July Washington and de Rocheambault, who commanded them, tried to seize New York, which was in British hands. To no avail. Then the thoughts of the commanders turned to Cornwallis, who was sitting in the south - if they had broken it, and the British would have been in a serious minority and without clear prospects. This could well end the war. 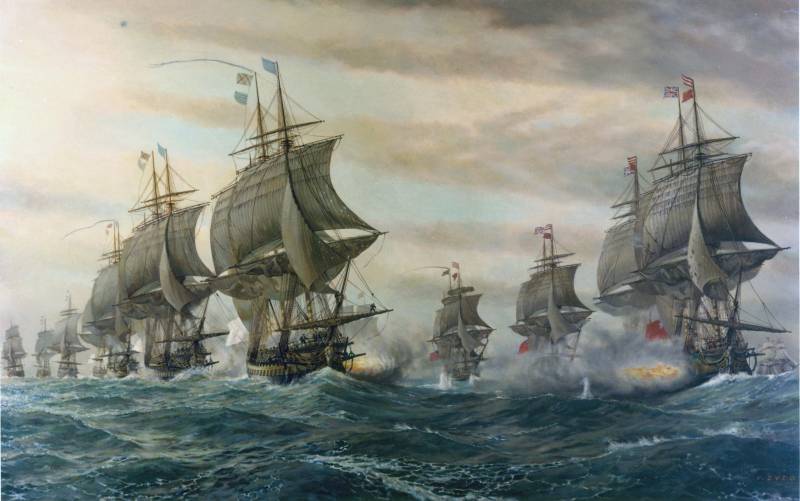 Sea Battle in the Chesapeake Bay
Fortunately, in mid-August, Washington learned that the de Grasse fleet was returning from the West Indies.

In early September, a battle broke out between the English and French in the Chesapeake fleets. It ended, from a tactical point of view, with nothing - the main striking force of both sides was preserved, although “on points” there was a slight superiority of the French. What was logical - their fleet was tangible, although not critical, anymore.

But in a strategic sense, the French broke the bank - the British commander Thomas Graves was not defeated, but returned to New York. This meant that Cornwallis in Yorktown was now deprived of the opportunity to retreat by sea - it was blocked by French ships.

The troops of Washington and de Rocambo left Virginia Williamsburg on September 28. The combined forces totaled about 16 thousand people. It is enough to defeat the one who was blocked from the sea and cut off from the supply of Cornwallis.

Wise from the experience of the war with the British, taught by battles with the dashing dragoons of Tarleton, the Americans evenly distributed the artillery on the march. All so that, in the event of a sudden attack, the convoy could immediately enter the battle. Everyone understood that a cornered rat would fight much more desperate. 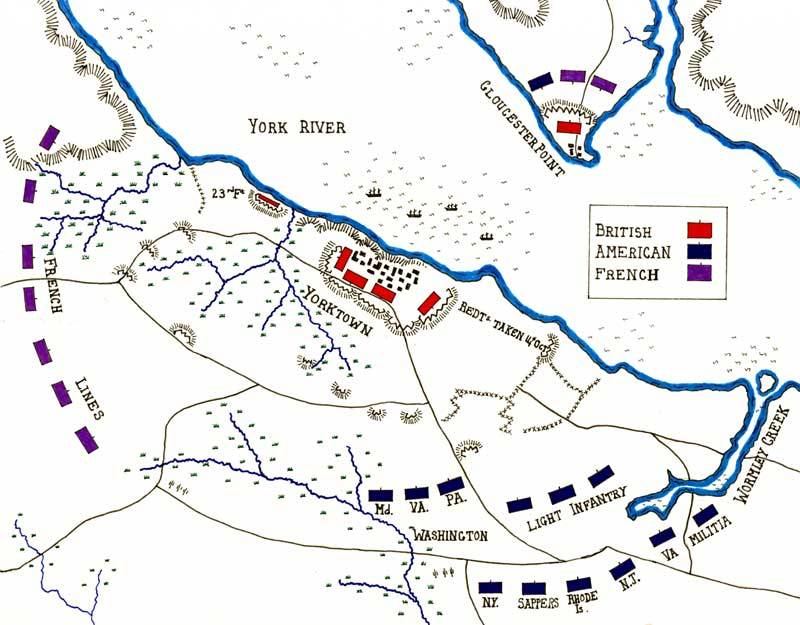 Siege of yorktown
But Cornwallis did not throw any fortels, but was engaged in the construction of defensive positions around Yorktown. The answer was simple - the English commander was waiting for reinforcements from New York.

In the meantime, he was preparing to hold on - he drowned small ships, blocking the fairways leading to places of convenient landing. He built redoubts. And he gave orders to drive horses - the supplies were already drawing to a close.

And the Franco-Americans began a proper siege according to all the canons of the XVIII century. They dug parallels of trenches, rolled out cannons, and at night brought glanders closer to the British positions. They started digging the first parallel on October 6 - and on the 9th, the besiegers concentrated their artillery and opened fire on Yorkatoon.

A few days later, the British closed almost all the embrasures - realizing that they still won’t win the artillery duel. But the people of Cornwallis took their toll at night, when the enemy could not really aim, and get into the guns.

On October 11, the Allies advanced glanders far enough to lay a second parallel - about 250 meters remained from it to the enemy. The Americans and the French had not yet had time to advance artillery, but were already forced to occupy the parallel by people. And the British used this moment to the fullest - the gunners were ordered not to spare the ammunition. True, a night later, the Allies pulled the artillery closer, and Cornwallis again proceeded to deep defense.

Three days later, the French and Americans began to attack the British redoubts in the night and captured two of them. The British responded with a daring night raid, during which 6 guns were disabled. But fundamentally this did not change anything.

Things slowly but surely progressed to the fact that Cornwallis still squeeze. And he decided to use the last chance. The plan was simple - at night transfer the army to the other side of the river, where the English-controlled town of Gloucester was located. In the waters of York, nothing threatened him - de Grasse's ships did not enter the river, being gathered in a single fist in case the Graves fleet returned.

In case of success, where the minimum forces of the allies were concentrated, one could try to break through. But Cornwallis was destined for something else - the weather failed. A strong wind rose, a downpour broke out. When they were over, dawn came. It was too late to rush about. 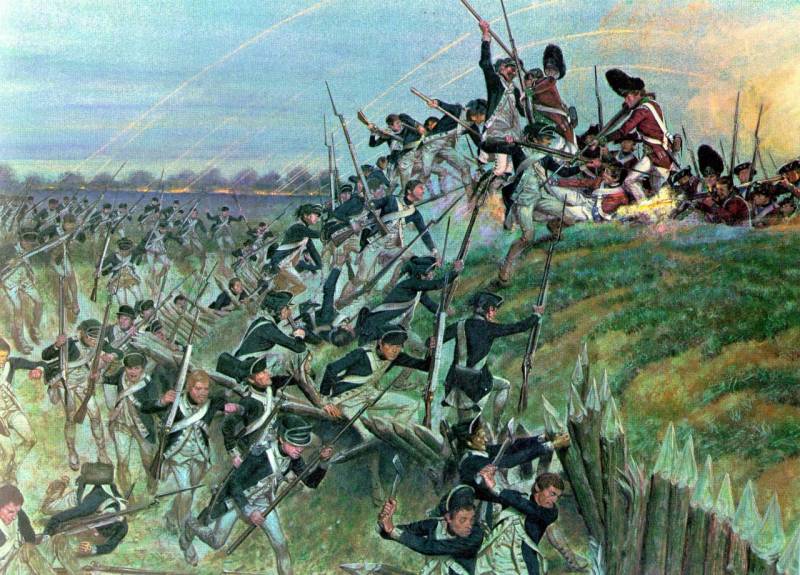 Take British Redoubt
Then Cornwallis, realizing that there would be no reinforcements, sent the parliamentarians to discuss their surrender. And on October 19, the British folded weapon.

The siege of Yorkatoon did not end the war immediately - the British still had significant forces in the colonies. But against the backdrop of the still fresh French and having gained a second wind of the Americans after a high-profile victory, this was not enough. There was only one way out - to send more troops. But parliament was already fed up with an unsuccessful war - the more time passed, the greater the British elite was inclined to leave 13 colonies alone.

Ahead were political disputes, diplomatic trade in Paris, the signing of a peace treaty. The fate of the future United States was not yet clear. They could both become a reality for centuries, and turn out to be a one-day state - Americans had enough internal problems and contradictions. But one thing was clear - the country was more or less formed, and, fused in the fires of the battles for independence, gathered together - at least for a while.

How newborn America will take advantage of its historical chance, now depended only on her alone.