Secretive "cracker" missile defense based on the Su-57. Project announced by the Russian Aerospace Forces 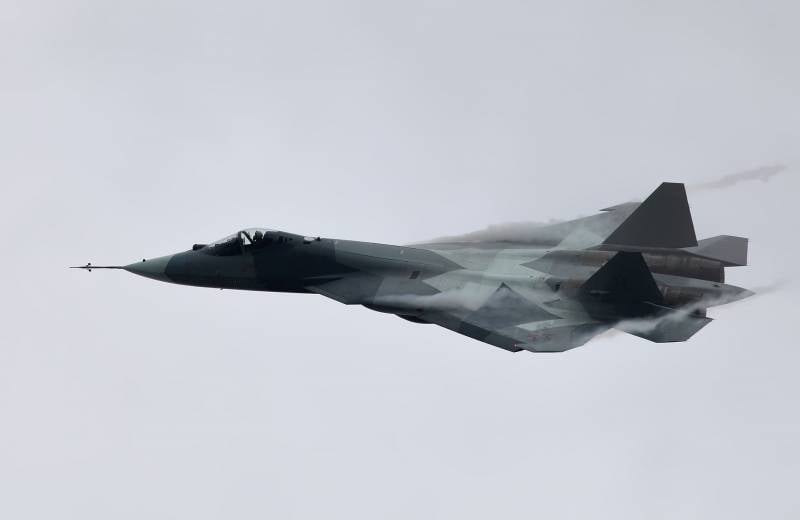 Undoubtedly, the recently announced by the Deputy Head of the Russian Ministry of Defense Aleksey Krivoruchko the timing of the arrival of the first mass-produced multi-role Su-57 “first stage” fighter planes (equipped with AL-41F1 / “Product 117” turbofan aircraft) to the combat units of the Russian Air Force allowed for more than one thousand Russian to breathe with relief observers and experts, previously seriously alarmed by information about the malfunction of the electrical control system or the mechanization of the tail unit of one of the pre-production copies of the Su- 57, which led to the car entering a flat corkscrew and subsequent crash in the vicinity of Komsomolsk-on-Amur.

Apparently, in this situation we were talking only about the consequences of ordinary “childhood diseases” of a computerized emf or the plumage mechanization units of the Su-57, which can be eliminated as soon as possible either by a slight update of the software of the remote control system, or by eliminating malfunctions in tail control mechanisms.

The most compelling argument in favor of this conclusion is the unexpected conclusion of a contract between the defense department of Algeria and Rosoboronexport for the supply of the Algerian Air Force with 14 multipurpose promising aviation complexes of the Su-57E export modification. It is logical to assume that the conclusion of such a significant deal could take place only after the Algerian side had been provided not only with exhaustive information about the reasons for the loss of the prototype Su-57 "first stage", but also with a number of guarantees that would exclude the occurrence of this kind of emergency situations with fighters to be delivered to combat units of the Algerian Air Force in the foreseeable future.

Prospects of becoming "on the wing" ligament Su-57 - "Dagger"

In the wake of the general delight caused by the information on the arrival of the first serial Su-57s to the Russian Air Force in the first half of 2020, as well as on the appearance of the first reliable foreign customer-operator in the face of the Algerian Air Force, particular relevance in expert circles and the military-analytical sector of the blogosphere raised the question of the appropriateness of the planned integration of advanced Kh-57M47 “Dagger” aeroballistic missiles into the ammunition of Su-2 combat missiles, which was announced at the end of December 2019 by a senior representative of the Russian Aerospace Forces during the report to the head of state, Vladimir Putin. As one would expect, information about the upcoming conversion of serial Su-57s into Dagger carriers was met with an extremely mixed reaction from an audience of eminent Russian military-technical publications.

In particular, most observers of the notorious Russian portal “Military Parity” were very skeptical of this news, having come to the conclusion that, despite the open architecture of the avionics avionics base of the Su-57 fighters, which provides the possibility of fast software and hardware adaptation of the SUV of these aircraft to the use of most types of advanced missile weapons, the most suitable carriers for long-range X-47M2 aeroballistic missiles will continue remain modified MiG-31K interceptors, which received a package of hardware and software updates and a new reinforced ventral suspension assembly to accommodate the 10-fly KTRV brainchild and colomens who "KBM". And only a small part of commentators spoke out in favor of implementing this project in the hardware, arguing their opinion, firstly, at times the radar signature of the Su-57 - “Dagger” impact radar in comparison with the MiG-31K - “Dagger” ”, Secondly, the Su-2,5’s 3-57 times superiority in range, which will provide the possibility of a more secretive and deeper penetration into the powerful air defense zones A2 / AD of a potential enemy.

Indeed, at first glance, the skepticism described above for most of the audience has the right to exist, due to a number of compelling reasons. The more massive and stronger power units of the MiG-31K airframe made of stainless steel (50%), aluminum alloys (33%), titanium (16%) and composite materials (about 1%) are perfectly adapted to the installation of heavy suspension units with missiles X-47M2 "Dagger". Having a decent safety factor, the MiG-31K fuselages will provide the “Daggers” mounts with impressive resistance to excessive loads that arise when carriers carry out maneuvers with 3-4G overloads.

In the case of using Su-57 fighters as carriers for X-47M2 aeroballistic missiles, the situation is no longer so clear. The structural strength of the T-50 center wing at the proposed mounting point of the “Dagger” suspension assembly is absolutely not “sharpened” for the placement of goods with similar weight and size parameters (weight about 3,5-4 tons and length 6,5 m), which ultimately can lead to to the well-known phenomenon of the so-called kink of a glider in the area of ​​the inside fuselage compartments of armaments during the execution of maneuvers with overloads of more than 2-3 units.

Nevertheless, taking into account the extremely small total effective reflecting surface of the Su-57 impact ligament - the “Dagger” (0,3-0,4 sq. M versus 13-15 sq. M of the MiG-31 - “Dagger” ligament) due to the small radar signature of the promising “Drying”, as well as having performed a number of simple mathematical calculations, we can come to the unambiguous conclusion that flying in the mode of following the terrain of the Su-57 with the “Dagger” on the suspension will be detected by AFAR-radar AN / APY -9 deck aircraft AWACS E-3D "Advanced Hawkeye" at a distance of 250-300 km, while the MiG-31K with the X-47M2 will be detected by this deck-mounted airborne radar at a distance of 550-650 km! It is logical to assume that in this situation the likelihood of a direct collision of the Su-57 with enemy fighter aircraft before the Daggers leave the suspensions will be minimized (in comparison with the MiG-31K), as will the need to perform vigorous anti-missile maneuvers that can provoke a glider breakdown.

And this means that the multipurpose strike systems, represented by X-47M2 aeroballistic missiles integrated into the ammunition of the 5th generation Su-57 fighters, are capable of breaking through enemy air defense zones A2 / AD at times more efficiently without revealing their own location until reaching the lines the launch of the deadly "Daggers" at strategically important facilities located in the back of the rear zone. In the same turn, reaching a radius of 1800–2000 km, the Su-57 will provide the maximum “depth of impact” of the “Dagger” of about 3500 km, surpassing even one of the main carriers - the Tu-22M3M long-range bomber in this parameter.