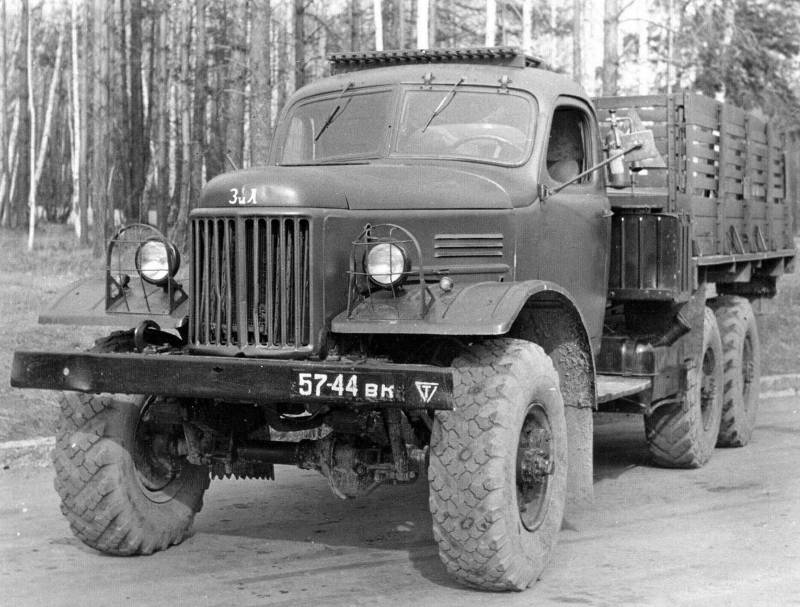 The creation of the first post-war army trucks was not without the influence of the American design school. By and large, in the Soviet Union there was nothing special to be guided in this regard. The first developments on all-wheel drive all-terrain vehicles (ZIS-36 and GAZ-33) are dated to the beginning of the 40s, but they, for obvious reasons, did not receive proper development. The direct serial predecessor of ZIL-157 was the ZIS-151, which was developed in 1946 and was largely based on technical solutions from the Lendliz Studebaker US6 and International M-5-6. But it cannot be said that the 151st car was a complete copy of the American: in the fall of 1946, the experimental ZIS-151-1 was built with single-wheel rear wheels (10,5 - 20), which was noticeably ahead of the future production model on the road. 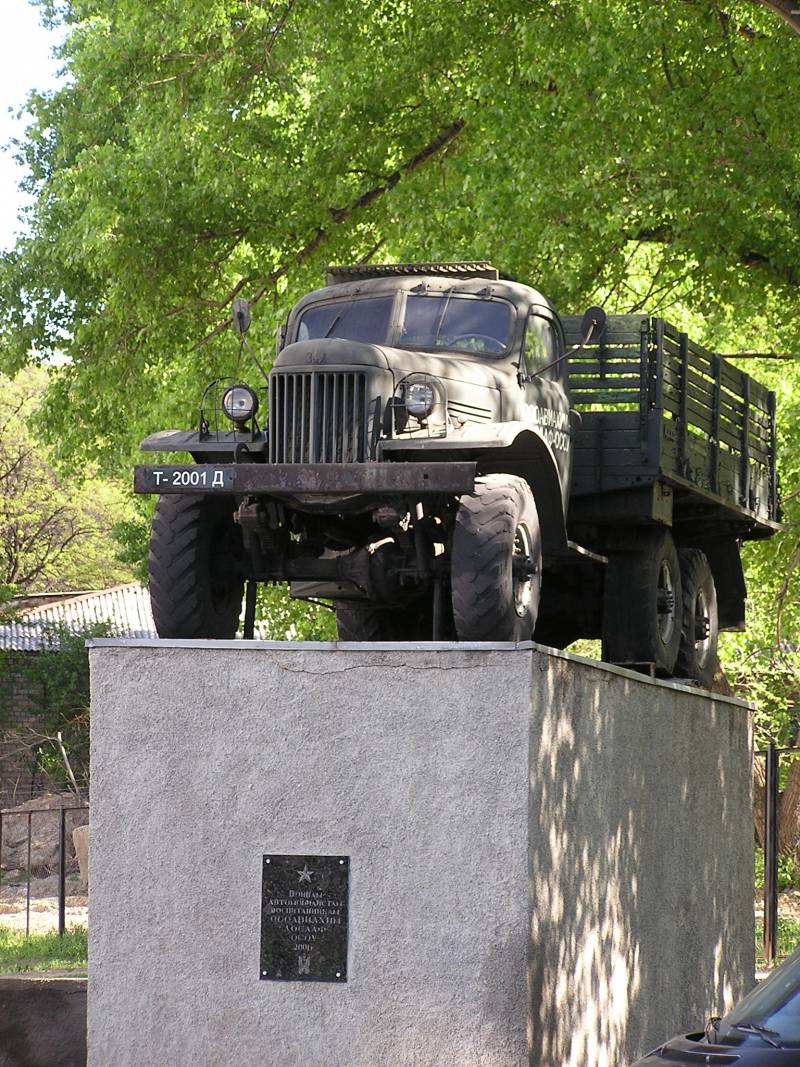 However, the influence of the military experience of operating the Studebaker was outweighed, and the ranks of the Soviet Army preferred the gable wheels of the basic version. One of the arguments in favor of this decision was the supposedly greater survivability of dual wheels on the battlefield. The opinion of Ivan Likhachev, the director of the plant, who for some reason did not like single-wheel wheels, was also important. Yevgeny Kochnev, in this regard, writes in the book “Automobiles of the Soviet Army” that the adoption of the largely unsuccessful “grenade” ZIS-151 for ten years stopped the progress of domestic all-wheel drive equipment for the military. 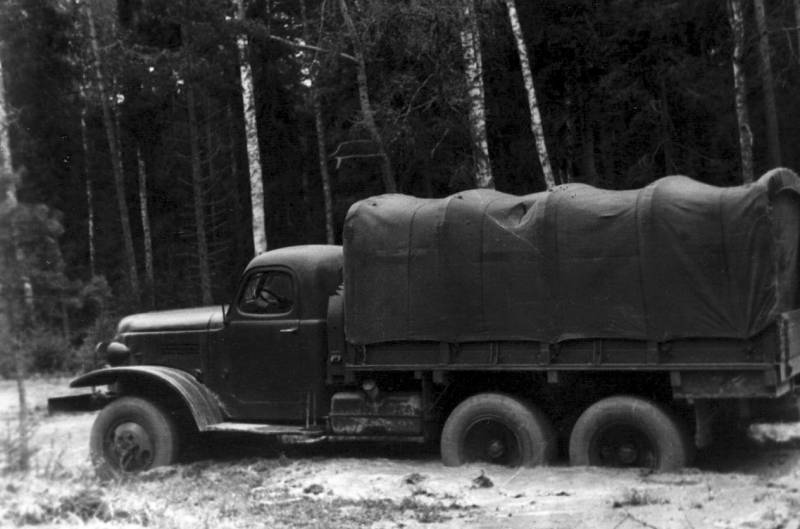 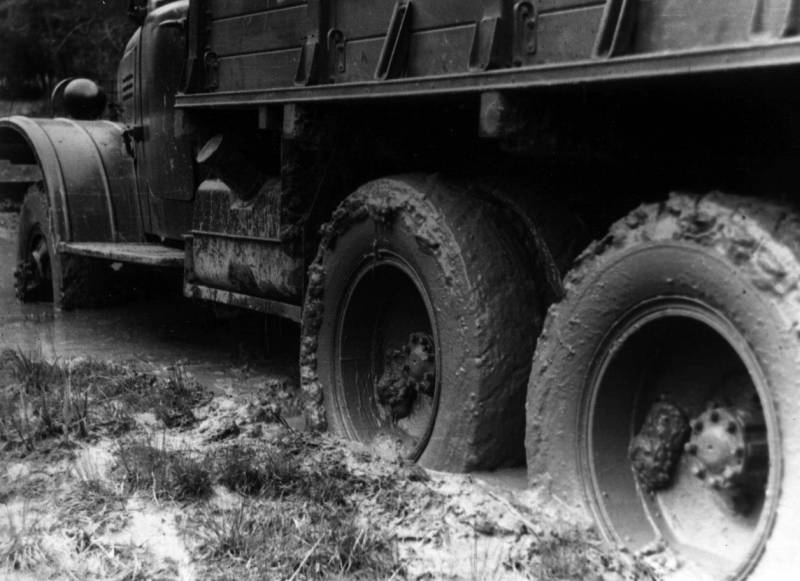 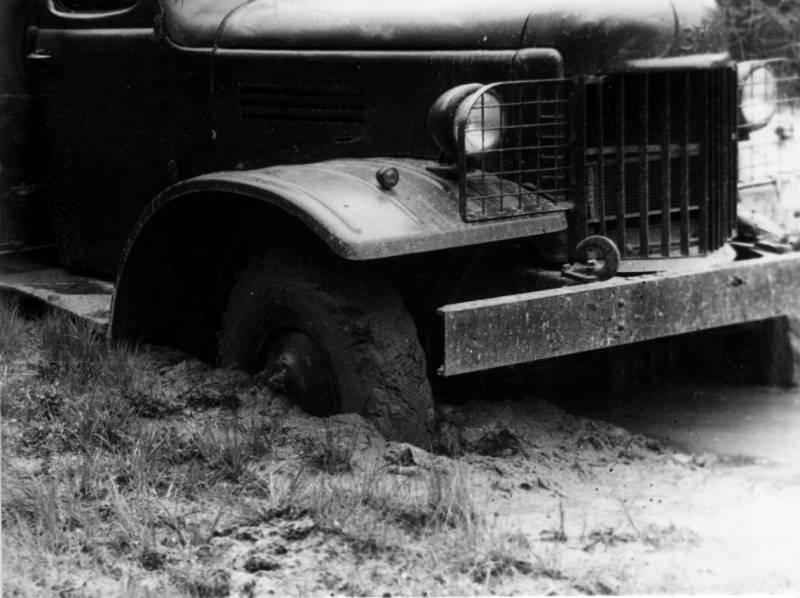 The predecessor of the ZIL, ZIS-151, was poorly prepared for heavy off-road conditions: overweight, a weak engine and two-wheeled rear wheels interfered
It is interesting that initially the cross-country capability of the ZIS-151 was so low that in state tests in 1949 they also tried to set the gable wheels on the front axle. Naturally, this decision only worsened passability, especially in sand, snow and thick mud. Now sticky mud, clay and snow clogged not only the cross-axle clearance on the rear wheels, but also in the front. In addition, the mismatch of the front and rear ruts seriously increased the resistance to movement on the most harmless off-road. As a result, the ZIS-151 serial car turned out to be overweight, not fast enough (no more than 60 km / h) and uneconomical, for which it received the nickname "Iron". 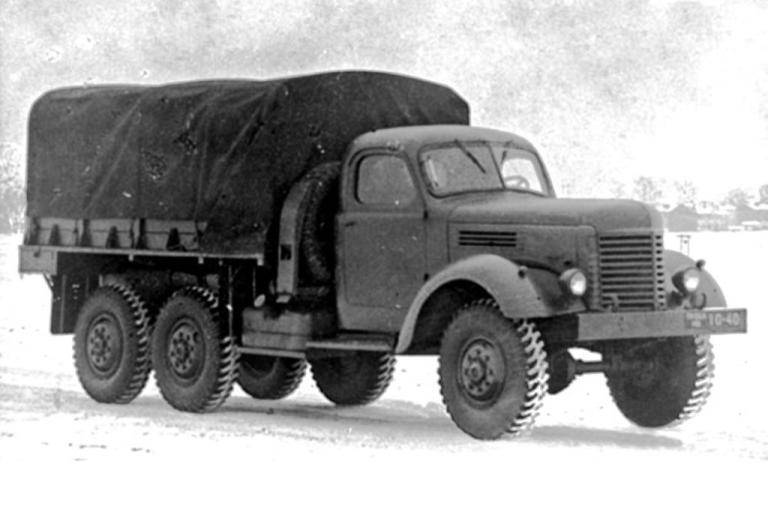 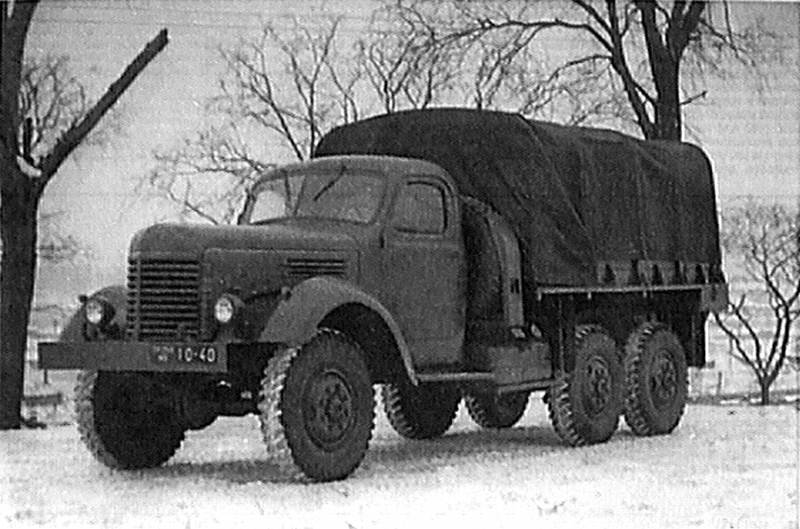 That could be ZIS-151 with single wheels
Gable wheels not only caused excessive losses in the transmission and chassis, but also forced to carry two spare wheels with them at once. On the roads, drivers often had to remove the inner wheels in order to somehow reduce the resistance to movement. And the main drawback of the machine was the lack of reliability of most components, which factory workers had to struggle with throughout the entire life cycle of the model. This was also one of the reasons for the slowdown in the next-generation “single-handed” truck.

However, the ZIS-151 became the basis for a constant creative search for the engineers of the Moscow Automobile Plant, the developments on which eventually became the most important in the design of ZIL-157 and ZIL-131. Such an example was the series of experimental ZIS-121 machines, on which from 1953 to 1956. practiced more powerful motors, reinforced frames and chassis, the long-awaited single-wheel wheels and locks of all differentials. The most important innovation of experimental trucks was the system of adjusting the internal pressure in tires with external air supply. 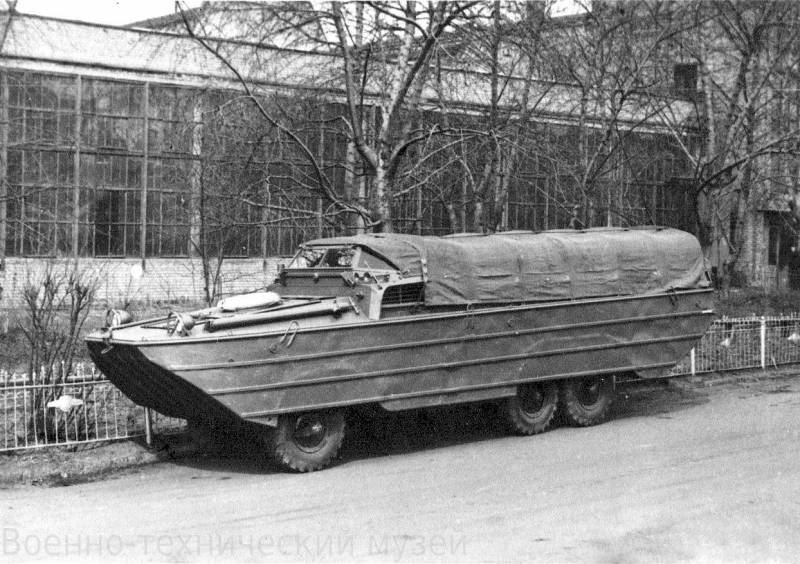 ZIS-485A. Late version. Air supply to the wheels - already through the hub 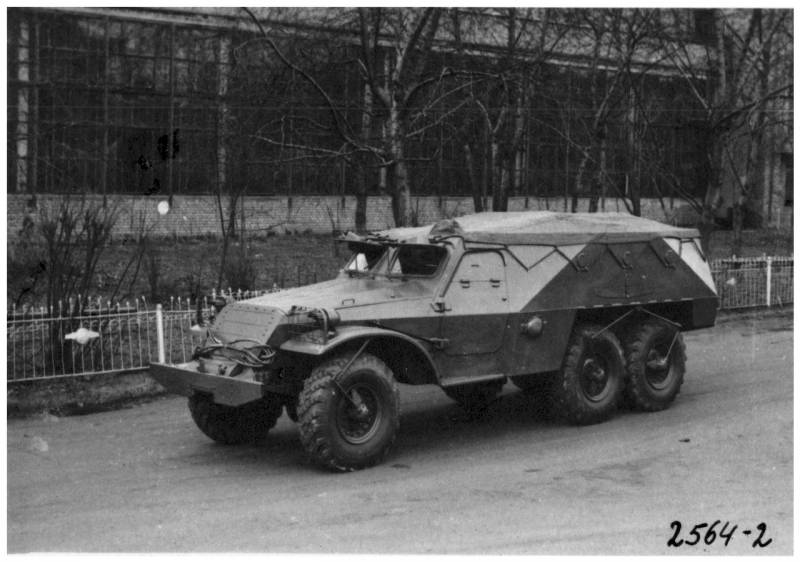 BTR-152B
Initially, the wheel inflation system was developed for the ZIS-485 three-axis army amphibian, the creators of which, in turn, were guided by the American GMC DUKW-353 floating machine. On amphibians, reduced pressure in the wheels was vital when leaving the water bodies on the swampy shore: this seriously increased the area of ​​the tread contact with the ground. A definite drawback was the external air supply, the hoses and pipes of which could be seriously damaged when overcoming an ordinary bush. The second important advantage of the inflation system was the obvious increase in tire resistance, which was crucial when installing it on the BTR-152V. However, no one seriously thought about the benefits of installing such systems on trucks for the army: it seemed that the gigantic waste of material for implementation would never pay off. As often happens, chance helped in this situation. In 1952, a group of engineers went for potatoes to one of the farms near Moscow. It was late fall. In order to avoid product freezing, a huge amphibian ZIS-485 was detached as a kind of “thermos”. The body of this waterfowl was much better protected from wind and snow (and heat from the engine pretty much heated the boat body) than the ZIS-151 blown from all sides, of which there were two copies in the group. 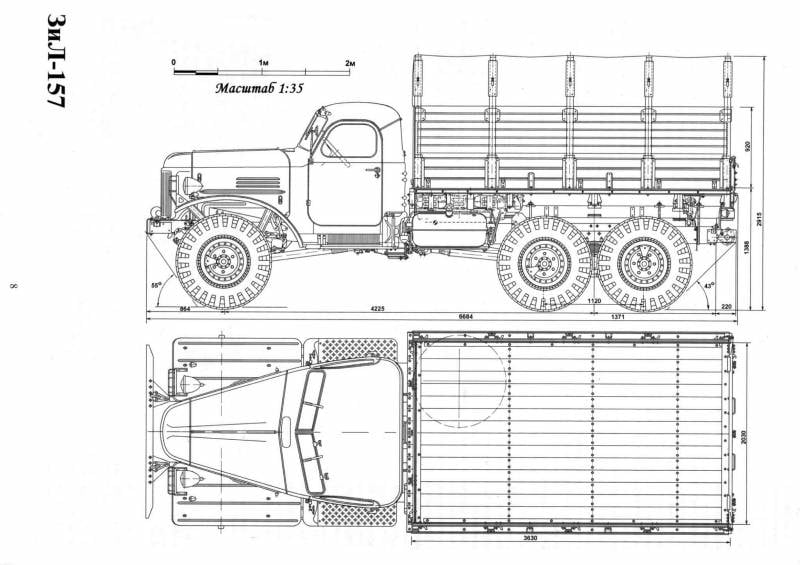 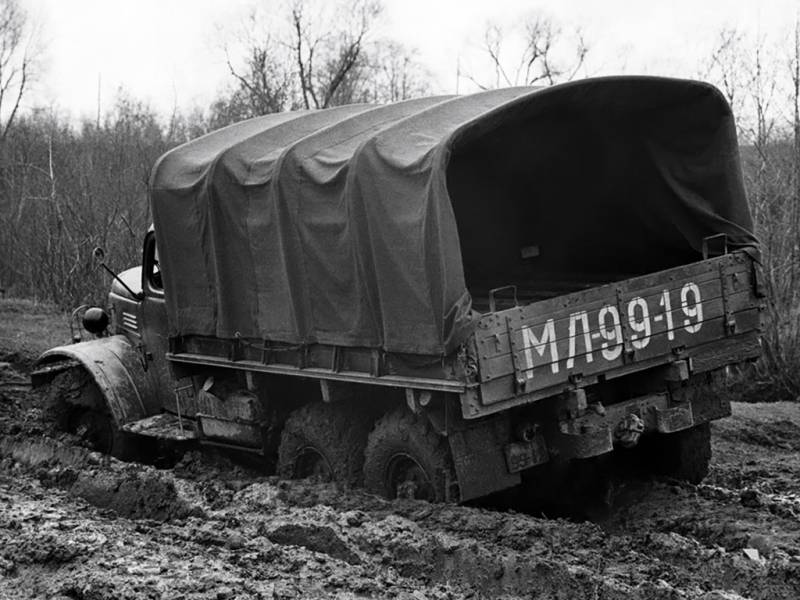 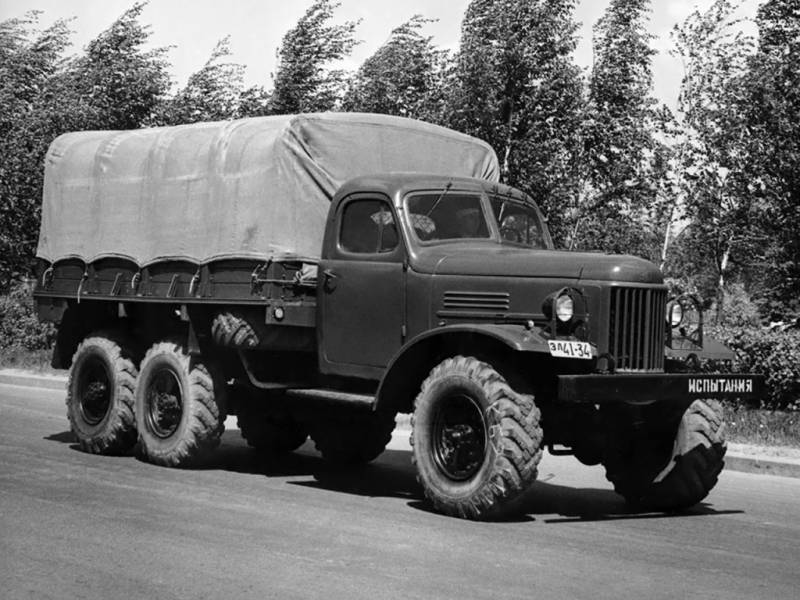 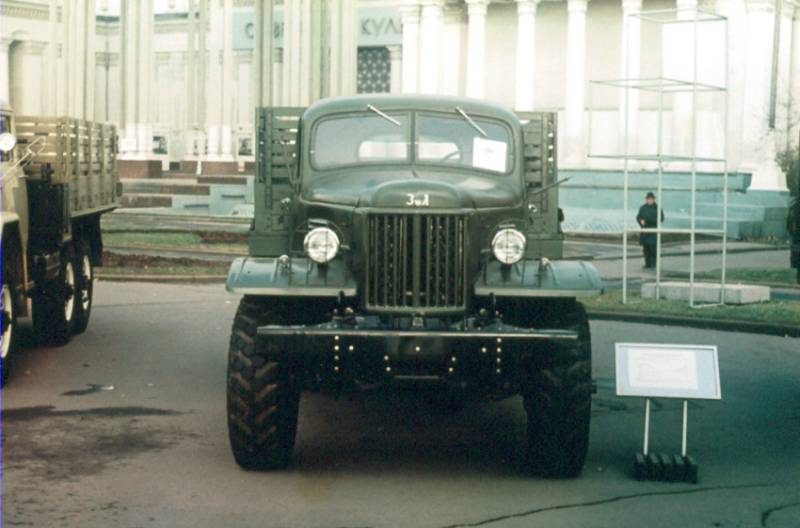 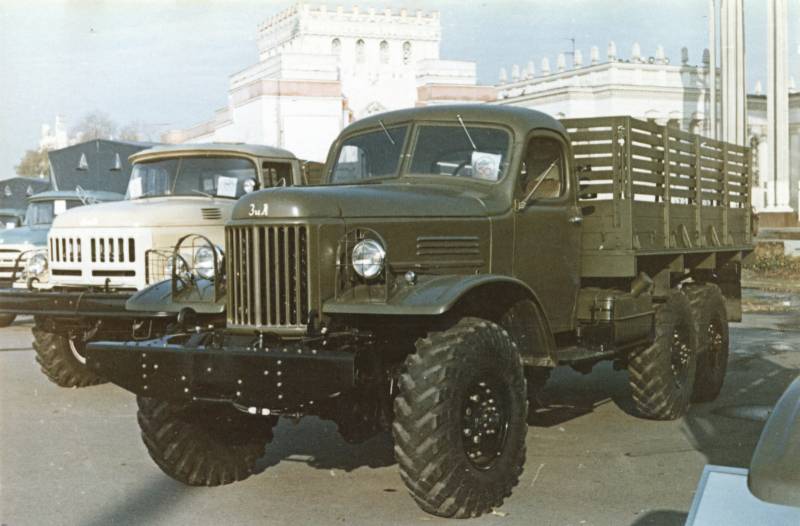 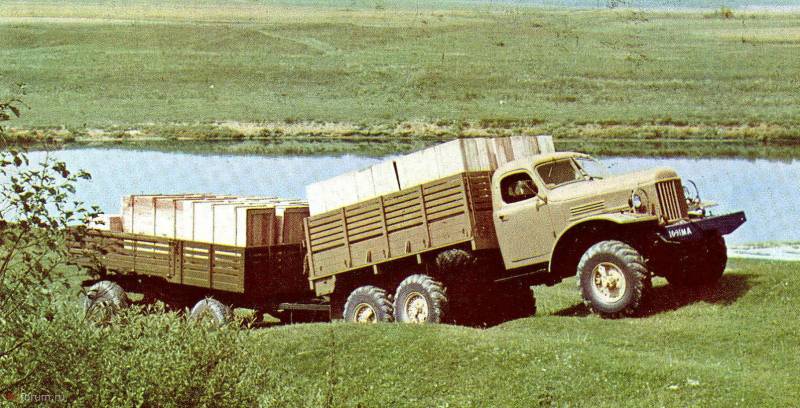 When on the way back the convoy with potatoes fell into a snowdrift, then the ZIS-485 had an opportune time to have a tire pressure regulation system, with which it was ahead of the rest of the machines by several buildings. In addition, when driving on loose snow, the rear single-wheel wheels of the car played an important role, which, I recall, the ZIS-151 did not have. For more accurate experimental data, a chassis from the ZIS-485 was put on a truck and drove into the snow of the frozen Pirogovsky reservoir. The first tests showed an increase in traction capabilities of the experimental ZIS-151 in 1,5-2 times compared with the basic version of the machine. It would seem that the advantages are obvious, and take the tire inflation system and put it on new cars right now. But the future ZIL-157 had to literally wade through the thorns to the conveyor.

In 1954, comparative races of serial all-wheel drive vehicles and promising developments for the army were organized. Among them was the experimental ZIS-121V (the future ZIL-157) with a wheel inflation system, which on swampy soil was second only to the ZIS-152V armored personnel carrier, also equipped with pumping. Deputy Defense Minister Georgy Konstantinovich Zhukov was present at the tests, following the results of the tests in an ultimatum form, he demanded that the factory workers urgently introduce a novelty in wheeled vehicles for the army. The Stalin plant ultimately became the first in the world to master such a difficult technique in mass production. We managed to get rid of the vulnerable rod of the external air supply in 1957, when the engineers at that time, ZIL, G.I. Pral and V.I. Mashatin, created a scheme for supplying air from the inside through the axle of the hub.

In March 1956, the ZIS-157 was recommended for mass production, however, with reservations. In the conclusion of the commission, excessive steering sensitivity was indicated, which on rough terrain could lead to injuries. The design requested a power steering, but the engineers limited themselves to a shortened bipod gear. This reduced the transmitted blows, but the high steering force remained. Until the very end of the issue, this problem on the ZIL-157 was not solved: the driver had to literally wrap himself around the steering wheel all the time. Why did the power steering never appear on the car? There is no answer, especially as on the ZIL-130 and ZIL-131 in the steering there was an amplifier. In addition to single-wheel wheels on the rear axles, the ZIL-157 differed from its predecessor in the large tire profile, which had a positive effect on ground clearance: on the ZIL it was 0,31 m, on the ZIS - 0,265 m. Six-cylinder in-line carburetor engines similar in design were installed on ZIL-157 110-strong, on ZIS-151 - 92-strong), which explained the characteristic long wedge-shaped hoods. But only ZIL received the nickname "Cleaver" among the people and the army. 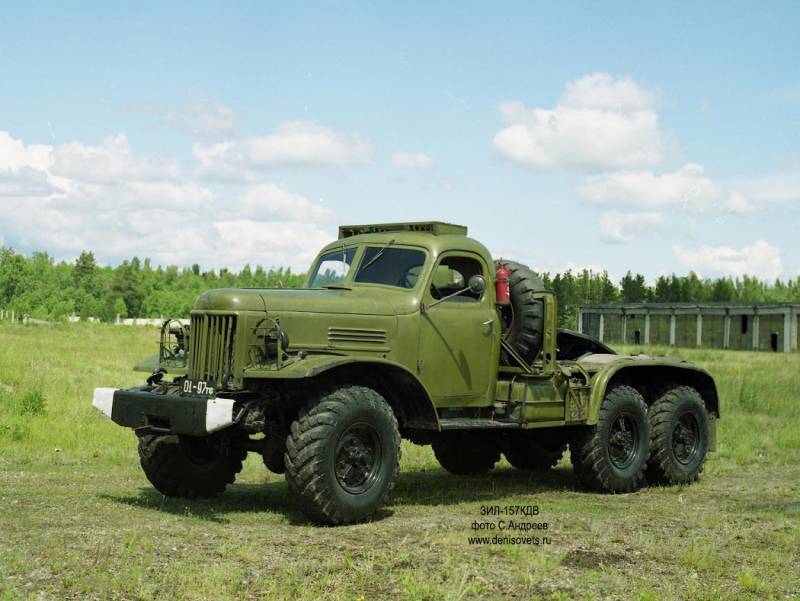 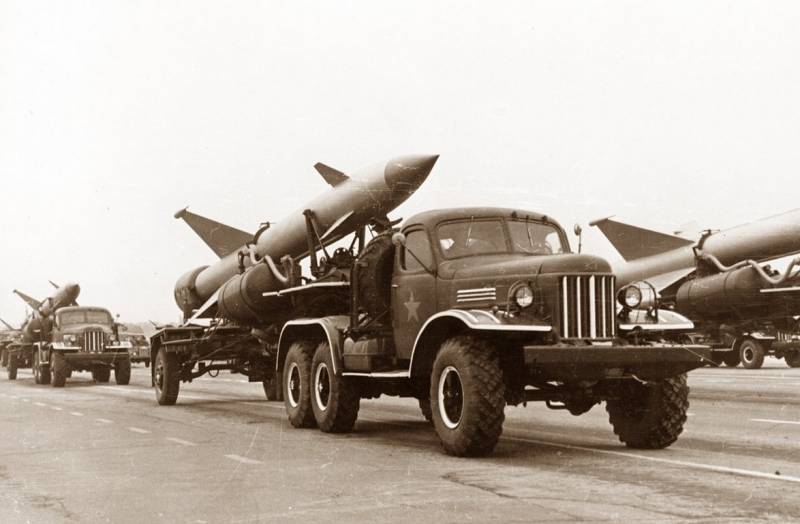 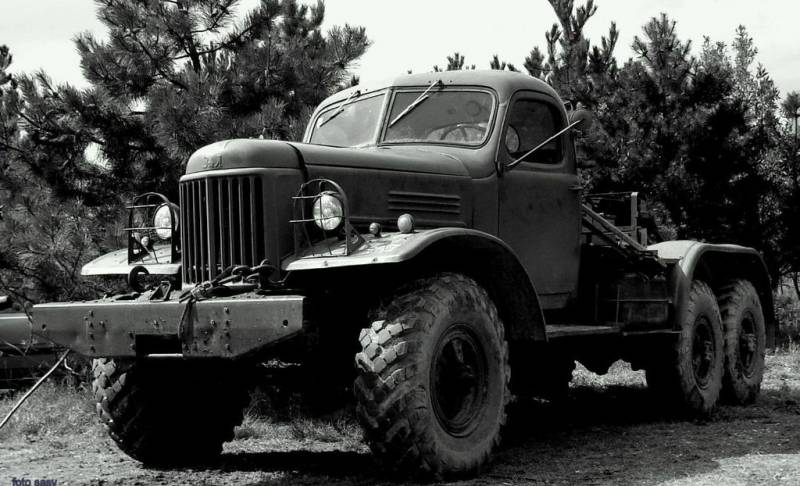 In addition, the only spare tire of the 157th was hidden under the body, which allowed to bring the platform closer to the cab. This, in turn, increased the exit angle to 43 degrees. An echo of the Lendlizovsk legacy in the design of the 157th ZIL can rightfully be considered a complex transmission with as many as five cardan shafts. This, firstly, remained in the new car from the predecessor ZIS-151, and, secondly, according to the military, it seriously increased the survivability of the truck on the battlefield. For example, the scheme allowed in case of damage to the driveshafts going to the middle and front axles to move on one rear axle. It turned out to be expensive, difficult and difficult, but, nevertheless, in production the truck with a constant transmission lasted in various modifications until 1985. In parallel with the “Cleaver”, a more advanced ZIL-131 (about which there is a series of articles on Military Review), and he already had a transmission scheme with a middle passing bridge. Of course, the 131st ZIL was in many ways superior to the 157th car, but Zakhar had one indisputable plus - this was the maximum engine torque that it reached at 1100-1400 rpm. On heavy off-road conditions, such virtually diesel engine parameters allowed the car a lot - experienced drivers claim that the ZIL-157 exceeded the almost standard GAZ-66 in this discipline. 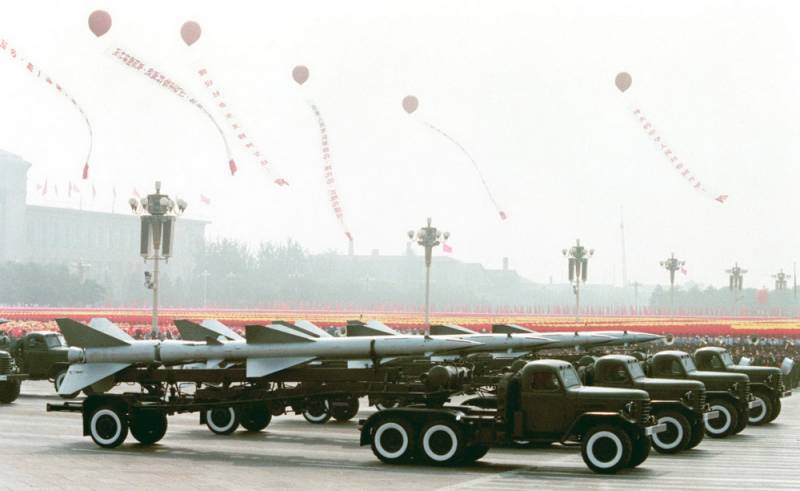 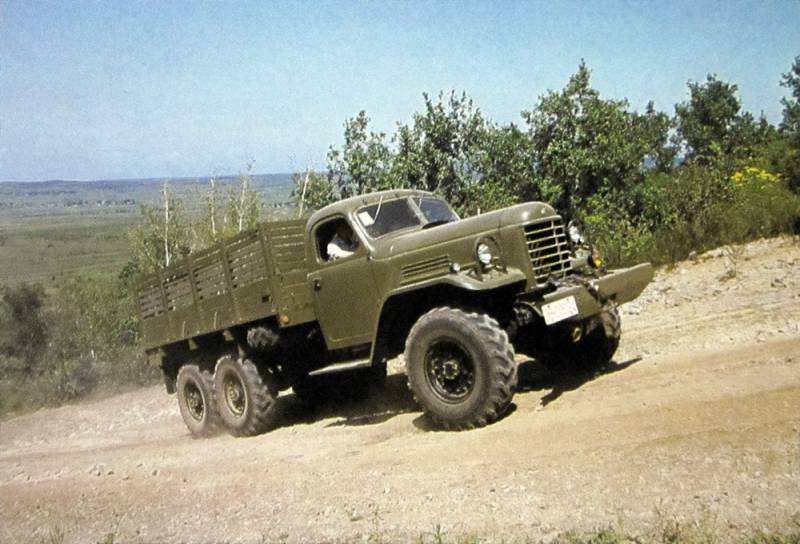 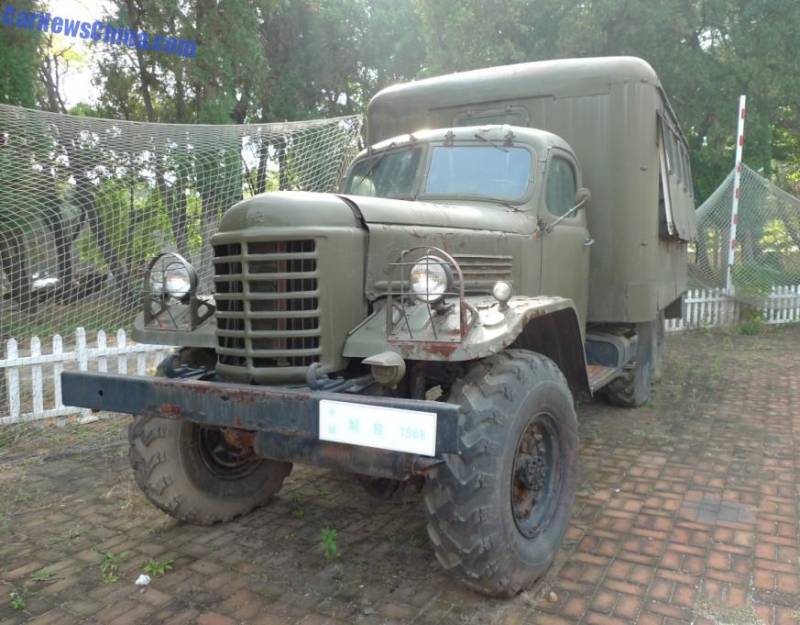 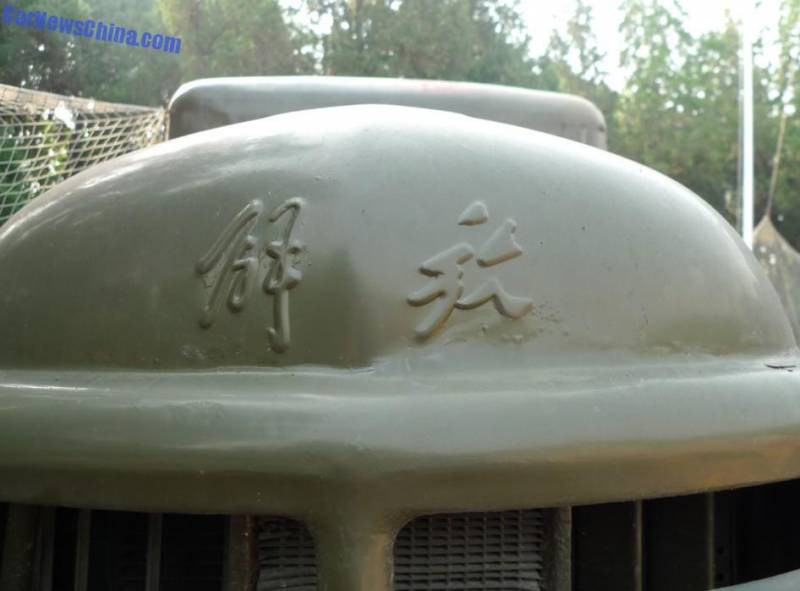 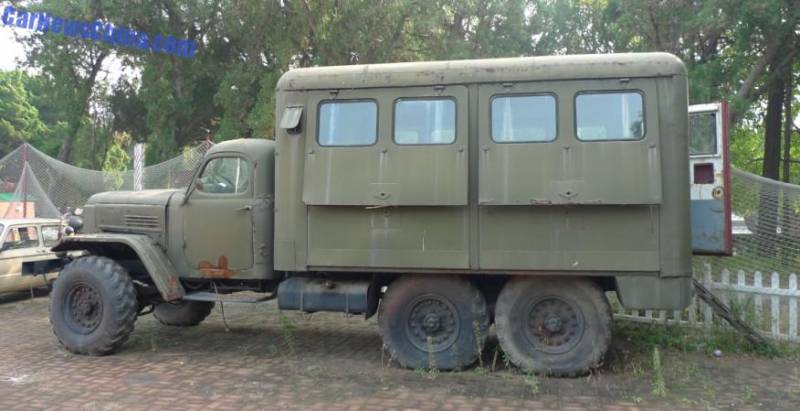 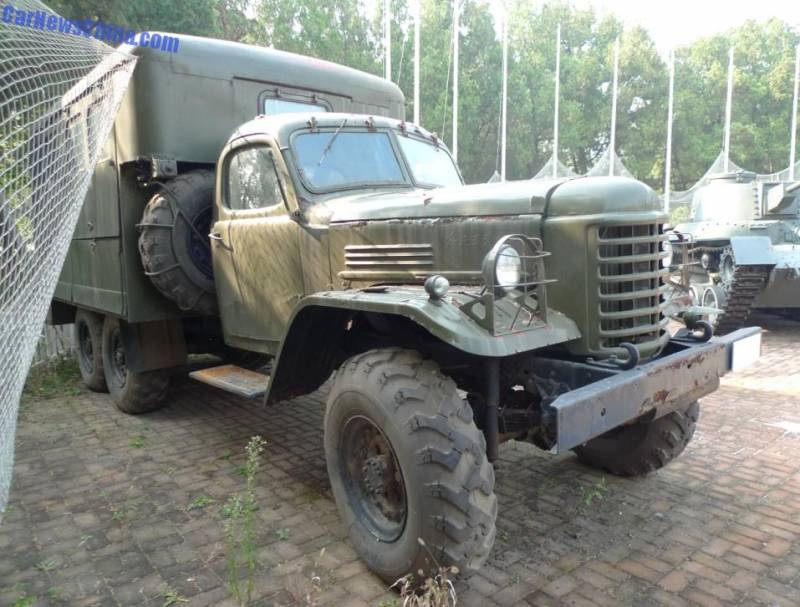 Jiefang CA-30 ("Liberation") - Chinese clone ZIL-157
Having evolved from the actually unsuccessful ZIS-151, the “Cleaver” turned out to be for the Soviet Army, by the totality of its properties, a real “Kalashnikov assault rifle” - equally unpretentious and reliable. At the same time, the machine turned out to be in demand in the markets of developing countries, and in China its licensed copy under the name Jiefang CA-30 was produced from 1958 to 1986.

Over time, the ZIL-157 equipment, rooted in World War II vehicles, became obsolete, and engineers made a lot of efforts to develop the structure. But this is another история.