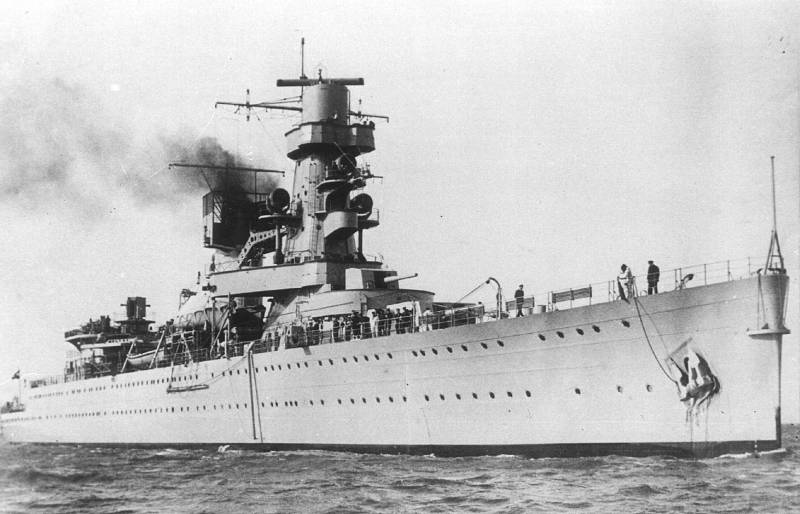 Yes, since January 1 of this year, a country such as Holland has not officially existed, so our story about the light cruiser of the Netherlands Navy "De Ruyter".

It so happened that, starting the story with the participants in the battle in the Java Sea from the Japanese side, it turned out to go to the opposite side. The Exeter was the first, and now it was the turn of another participant: the light cruiser of the Dutch fleet, De Ruyter.

Netherlands. Holland. The neutrals in World War I, who managed to slip through, despite the fact that the Dutch ships sank all sides with great pleasure, and the colonies robbed in the same way.

In general, with regard to the fleet, the Netherlands needed the fleet. Not only to confront external enemies, but also to protect their own large colonies.

It must be said that the Japanese empire looked at the Dutch colonies rich in oil, tin and rubber with interest, somewhat imagining themselves and believing in their own invincibility.

The Dutch, understanding the brewing problems, decided to create a fleet to protect their colonies. Mainly to protect Indonesia. The main role in protecting marine areas was assigned to submarines (32 units), and 4 cruisers and 24 destroyers had to cover them. True, as a result of the ensuing crisis, funding was reduced, and more than once.

So to the existing cruisers "Java", "Sumatra" and destroyers had to finish the cruiser, 4 destroyers and 6 submarines. Light cruiser "Java"
So there was an assistant to "Java" and "Sumatra", the cruiser "De Ruyter". The crisis, which was walking around Holland, did not allow building something Washington. There was actually enough money for a light cruiser, which they planned to equip the family with 150-mm guns. 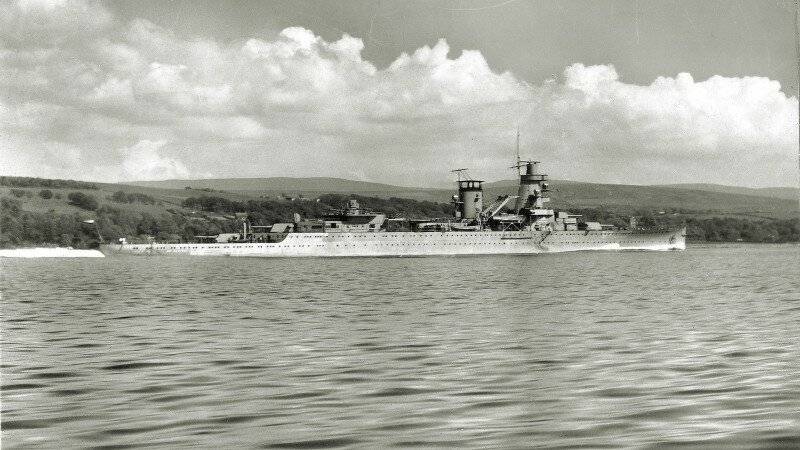 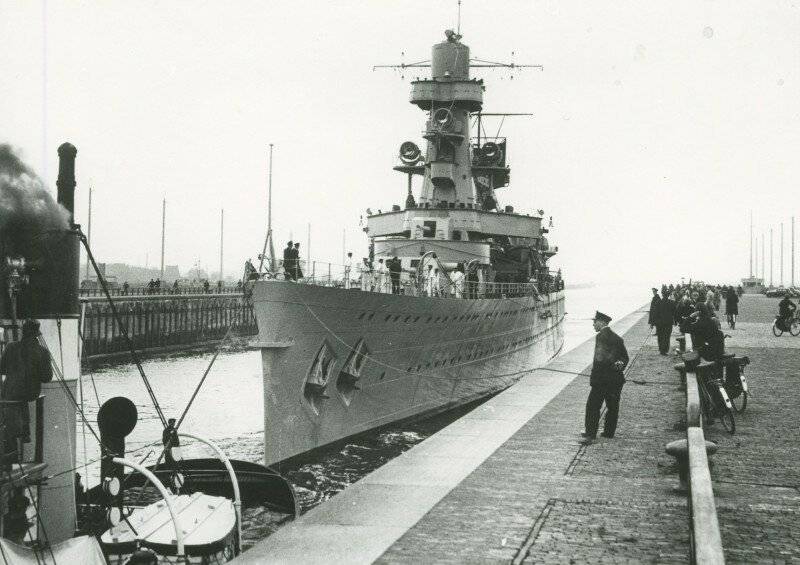 Designers from the Krupp firm firmly attached themselves to the creation of the ship, therefore the features of the cruising series “K” are clearly traced in the design of the ship. The reservation scheme was very similar to Cologne, but the experience of building Java allowed us to create a more modern model when the case was recruited from armor plates.

We did a fair amount of work on contours, and in general paid enough attention to hydrodynamics, as a result of which the cruiser turned out to be nimble. Moreover, with the same power plant as Java, De Ruyter was 2 knots faster. Plus, the turbines could be forced, and then for 15 minutes the cruiser could reach a speed of 33,4 knots.

The ship was divided into compartments by 21 bulkheads. Each compartment was equipped with a system to remove water in case of flooding.

In addition to a comprehensively thought out system to ensure the unsinkability of the ship, it had a powerful fire extinguishing system. Powder and shell cellars, boiler rooms were equipped with a fire irrigation system. And to extinguish the fire could be several ways at once:
- sea water from the hose system;
- foam from two foaming generators;
- water that was under steam pressure in the boiler room;
- water from the fire extinguishing system of fuel tanks;
- carbon dioxide from the generating unit in the boiler room.

A few words about weapons.

The main caliber guns were the Bofors German-made caliber 150 mm. The same ones as at Cologne and some German destroyers are quite modern and quick-firing.

They were arranged according to the retirement scheme, six guns in three two-gun towers and one on a pin machine, closed with a shield. Two towers installed aft. 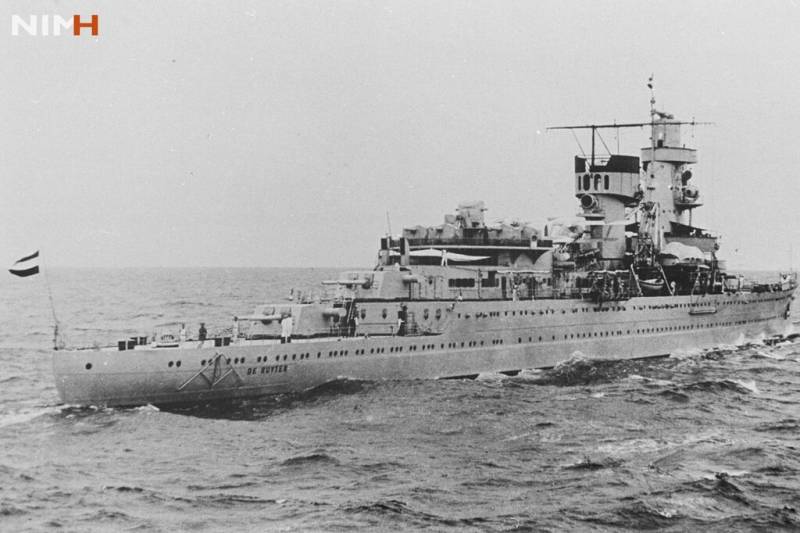 Such a scheme was preferred when firing on the retreat, which was not surprising given the difference between the Dutch and Japanese fleets. 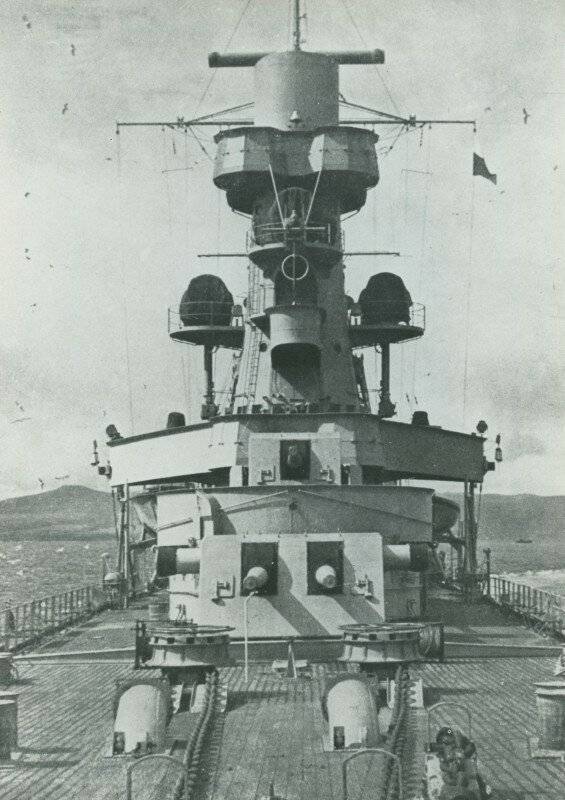 The ballistic data of the De Ruyter guns was about the same as that of the Java artillery, the firing range was 21 km, the weight of the armor-piercing projectile was 46,7 kg, and the fragmentation fragment was 46,0 kg.

However, the De Ruyter could give the exact same salvo as the Java, which had 10 such guns, but only 7 out of 10 barrels could participate in the airborne salvo.

But a special analysis requires anti-aircraft weapons. It was truly unique. Due to cost savings, the Dutch decided not to equip the cruiser with universal guns at all. Therefore, instead of the usual all-rounders with a caliber of 76-127 mm, ten 40-mm Bofors anti-aircraft guns of the Mk III model in twin units were installed on De Ruyter.

"Zeiss" rangefinders, coupled with their own computing devices, and even stabilized in three planes, had a remote guidance system from anti-aircraft fire control posts.

That case when the Dutch were able. So much so that the British immediately began to copy their anti-aircraft fire control system. The control system was beautiful, but that’s all that could be spoiled, the Dutch military didn’t just ruin, but they ruined it.

The magnificent capabilities of this revolutionary system were practically reduced to zero by its extremely unfortunate location. It is very difficult to say what the creators of the ship thought, but anti-aircraft guns were concentrated in one place: on the aft superstructure.

As a result, the cruiser was very vulnerable to aircraft from forward course angles, and for the same reason there was a serious threat of disabling the entire air defense of the ship as a result of the only successful hit in the aft superstructure.

True, there was still light anti-aircraft weapons. Four coaxial installations of 12,7 mm Soloturn machine guns. Two were mounted on the navigation bridge, and two above the bow rangefinder post. This could, of course, create some interference with attacking aircraft from the bow, but nothing more.

Well, four 7,7-mm machine guns in deck installations generally should not be taken into account as anti-aircraft weapons. As well as two seemingly anti-aircraft, but training guns with a caliber of 37 mm.

But the torpedo tubes on the cruiser was not at all. In the Dutch naval doctrine, the launch of torpedoes was the prerogative of exclusively submarines and destroyers. 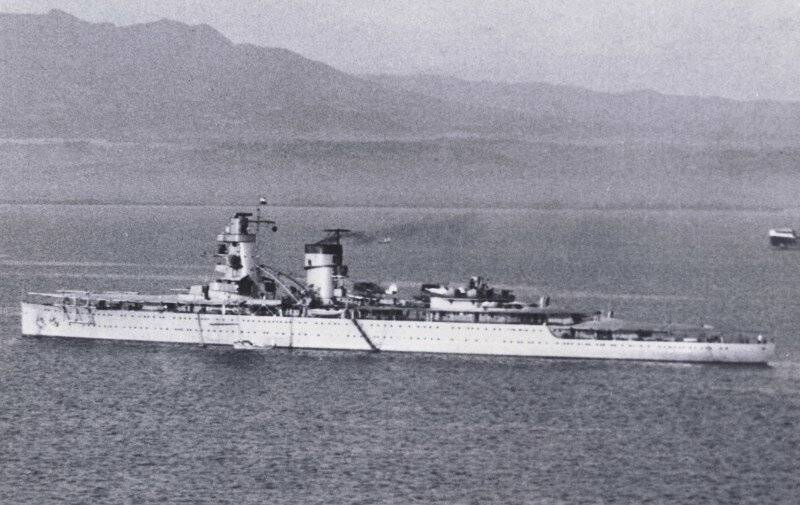 The cruiser’s crew consisted of 35 officers and 438 non-commissioned officers and sailors. It is worth noting that all the living quarters of the ship, which was supposed to serve in the tropics, were spacious, well-ventilated and even equipped with ventilation systems.

In general, the cruiser was unusually widely provided with various electrical household equipment: electric laundries, sinks, floor polishers, in general, everything that could facilitate the crew's service.

In general, De Ruyter could well serve as a model in terms of thoughtfulness of small details, modern systems and innovative approaches. It is a pity that all the innovations did not help him at all in a real battle, where the cruiser ran into opponents not quite equal to him.

But let's go in order. 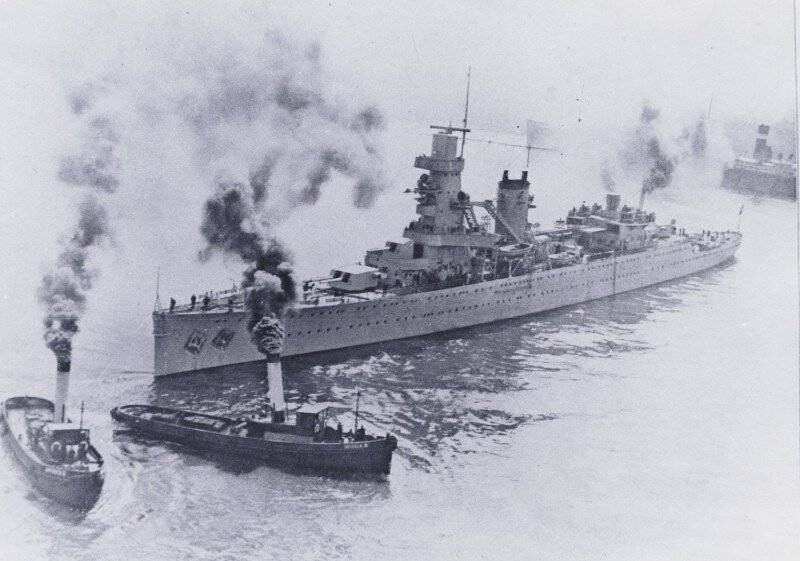 When the Netherlands suddenly ended on May 15, 1940, capitulating to Germany, the Dutch fleet in the colonies joined the Allies. Dutch ships were mainly involved in the protection of communications and wiring convoys.

After the German invasion of the Netherlands and the surrender of the Dutch army, the troops and navy in the colonies remained on the side of the allies. The East India Squadron was involved in the protection of communications and escorting convoys in the Java Sea and the Indian Ocean.

On December 7, 1941, Japan and the United States entered the war. And on February 4, 1942, the first collision of Dutch ships with the enemy occurred. The Allied Squadron, whose flagship was the De Ruyter, which consisted of the Dutch cruiser Tromp and the American cruisers Houston and Marblehead with the American destroyers Baker, Bulmer, Edwards, Stuart and the Dutch Drinks Hine "and" Van Gent "was attacked by Japanese aircraft.

Japanese pilots so finished the "Marblehead" that he had to be sent for repair in the United States. But this, as it turned out, was not the worst deal.

British-Australian and American ships approached the US-Dutch squadron. The Allies gathered all their forces to counter the Japanese attack on Indonesia. During February, the Allied squadron tried to oppose the Japanese. Safely losing Singapore, Palembang, the Allies prepared to lose Sumatra and Java.

Doorman led his ships to a base in Surabao when he received news of a large Japanese convoy literally 60 miles away. The admiral led the squadron to intercept the convoy and requested air cover, which he was not provided with. True, Japanese aviation did not bother the Allies much.

But this was done by a detachment of Japanese ships consisting of three groups of ships.

In principle, the Japanese had an advantage, but not fatal. It is worth noting that Doorman had an order to attack the convoy only at night, which devil he climbed to the superior enemy forces during the day, it is difficult to say today.

De Ruyter was the first to receive a direct hit from a shell from the Haguro. Further, the battle in the Java Sea took place under the complete control of the Japanese, who damaged the Exeter and sank the destroyers Kortenar and Elektra.

Further, Doorman continued to stupidly lose ships, the flagship “De Ruyter” got along with the rest, the radio station was disabled, and all the commands were given out by a searchlight. One can only imagine how such management was operational and intelligible.

At night, the remains of Doorman's squadron came upon the heavy cruisers Nachi and Haguro. In the battle that began, the Haguro gunners planted a 203-mm shell in the stern of De Ruyter, and when the cruiser, which had lost its course, began to turn away, they also hit it with a torpedo.

At the same time received a torpedo and "Java". Both cruisers sank, reducing the size of the Dutch fleet by two-thirds. The last ingenious order of Doorman was the order not to pick up the crews of Java and De Ruyter so as not to endanger other ships.

The surviving Houston and Perth safely washed off. Exeter was finished off the next day.

In total, De Ruyter got hit by two 203 mm shells and one 610 mm torpedo from the Japanese heavy cruiser Haguro. He stayed afloat for about 3 hours and sank, taking with him nearly 80% of the crew, along with Mount Admiral Doorman.

In principle, the course of the battle in the Java Sea confirmed the initial intentions and alignment of the allies. The Dutch rushed into battle and almost all died, the Anglo-Saxons sought to bring the ships to the rear, so at the first opportunity they took both Exeter and Perth with Houston.

Indeed, why would the British, Australians and Americans die for some Dutch colonies there?

In general, the death of De Ruyter is surprising. Well, really, what is one torpedo and two shells, albeit a 203 mm? Totally frivolous, in my opinion.

The cruiser, which was equipped with a very good system of struggle for survivability, and drowned from far from fatal injuries. Yes, the Long Lance is a very powerful weapon, almost half a ton of explosives, but the cruiser is not a destroyer. This is a large ship, even light in class.

If you familiarize yourself with the course of the battle in the Java Sea, you begin to think about the fact that both De Ruyter and Java were lost due to the complete unwillingness of the crews to fight for their ships.

In fact, a very good ship was lost out of the blue, in a completely meaningless battle. Without inflicting any damage to the enemy, because 4 Japanese vehicles sunk by the allied squadron at the cost of the death of 3 cruisers and 5 destroyers - well, obviously not to call the result successful.

And if you evaluate, then the "De Ruyter" was a very interesting and beautiful ship. Advanced in terms of weapons and equipment. Another question was what he had to do with the 150 mm guns against the Nachi and Haguro.

But as a project, you must admit that the light cruiser De Ruyter was a fairly high result of Dutch shipbuilding.

Anti-aircraft guns could be placed differently - and could be called an example for everyone.