Russians don't want to let strangers into their home 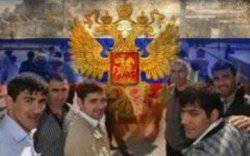 The Russians agree to impose a ban on the entry of outsiders into their regions. The latter are understood to be people of other nationalities who previously “did not stand here”. Probably, someone will consider that such isolationist sentiments are bad. But isn't all countries practicing the same thing, using the visa system for this? By the way, it can sometimes be canceled, but only for pleasant nationalities, such as within the European Union, and even toughened for the rest, which is happening in the UK now.

But let us return to Russia, which has recently witnessed several major domestic conflicts on national grounds, such as what happened in the village of Demyanovo, Kirov Region, between local residents and the Dagestan diaspora. After Demyanovo, many residents of Russia noticed that in their settlements there are "contradictions" between the local population and visitors of other nationalities.

More than 60% of respondents would prefer that representatives of certain nationalities be restricted from entering the region, according to the Public Opinion Foundation (FOM), according to the results of a survey of residents of 43 subjects of the Russian Federation. No need to guess what nationalities are meant: I suppose not the Germans with the French and other Swedes who do not rush to us. More and more people come to us not from the West, but from the East. And although there are relatively few national conflicts, social and economic problems will expand the field for their occurrence, experts say.

By encouraging uncontrolled migration from Central Asia, the authorities thus contribute to the growth of nationalist sentiment. Over the past 13 years, more and more Russians have begun to share nationalist ideas, they say in the fund. 36% of the country's inhabitants believe that "people of indigenous nationality should have more rights."

But one should not see in it any signs of racism, the traditions of which we never had and do not have. Simply, people in this way try to protect the habitual environment that is rapidly changing before their eyes. Yesterday it was relatively homogeneous, and today it is filled with groups of other ethnic groups, walking around 2-4-6-8 people. Now they occupy only grassroots jobs, but this is only as long as they lack education and connections. When all this appears, the competition will move to a higher level.

In Europe, you can already see it with the naked eye. In London, for example, 40-50-year-olds often clean the streets under the eternal rain, while negros and Indians enjoy working as clerks in their offices, not hesitating to complement European business attire with national attributes like black turbans on their heads. They dress their women in black shapeless bags with slits for the eyes that look, frankly, wildly.

Anticipating a not too distant offensive of a similar time, sociologists testify that the titular advantage of the titular nation before the visitors began to come out, regardless of the level of education, income and age. The growth of these sentiments will appear even more impressive if we recall that 13 years ago only 18% of the population supported the same thing, and 76% thought that all nationalities should have equal rights. It would seem that as society develops, isolationist sentiments should weaken, but they only intensify. Apparently, the visitors, who, figuratively speaking, were allowed to warm themselves from poverty and unemployment in their homeland, somehow behave differently if a third of the respondents complain about the “dominance of foreigners” and claim that there are interethnic conflicts in their region.

But the main hostility and irritation of the inhabitants of Central Russia are concentrated in two directions - visitors from Central Asia and people from the North Caucasus. The latter, being citizens of Russia, for some reason are not perceived by the others as “their own”.

“In the Russian view, there are differences between the inhabitants of the North Caucasus and the rest of Russia. They always oppose themselves to them and do not perceive the inhabitants of these republics as their own, ”said in a conversation with“ Moscow the news»FOM specialist Irina Osipova. We don’t talk about one thing, but Osipova emphasized it. “Focusing on ethnicity” has become commonplace in our society, she said.

Dislike, they believe in the POF, is based on the reluctance of aliens to accept generally accepted behaviors and merge with local society. It would be easier to prevent potential conflicts if “visitors respected our laws and traditions,” respondents noted. Visitors often prefer to observe their own traditions. In the best case, rather loud national music is carried from their watchman booths and cars, and at worst - lezginka dances in the squares, mostly in the evening and at night.

Speaking of watchmen. Previously, we were convinced that the visitors go to the most difficult and dirty work, which the indigenous people will not do. But now they are increasingly appearing behind the rudders of minibuses, in all sorts of security booths and posts, at the cash desks of stores. The guards used to be considered solely a patrimony of the locals. Here began their gradual ousting from more privileged places.

Sociologists are also inclined to believe that the negative perception of others is aggravated by their own disorder of those who consider themselves "indigenous" citizens.

However, FOM does not dramatize the meaning of the results obtained. “Migration processes are never simple, and conflicts are possible, but the fact that only 10% of respondents were personally discriminated by nationality suggests that fears are somewhat exaggerated,” said Irina Osipova.

However, all this can be only for the time being. “This is an alarming signal that both the state and society should reconsider their attitude towards interethnic relations,” said Vladimir Zorin, deputy director of the Institute of Ethnology and Anthropology of the Russian Academy of Sciences. He notes the rise in national intolerance in the country since 2008, and links this to the crisis.

In the meantime, law enforcement agencies are trying to ignore the national soil in any resonant conflicts. They qualified the events in Demyanovo as simply “riots” and hooliganism. Vladimir Zorin also sees in such clashes socio-economic and labor disputes, albeit with a clear national composition of the opposing sides. Guilty of the occurrence of conflicts should be sought in the regional and local administrations, he said. “It’s not Moscow that allocates space in the cemetery, in the market, it defines space for building a temple, a mosque, and a synagogue: these are issues of local self-government,” notes Zorin.

Another expert, the chairman of the supervisory board of the Institute for Demography, Migration and Regional Development, Yury Krupnov, says: "People do not react to nationality: they simply do not feel they are masters of the situation in their own territories." According to him, the reasons for the expansion of the inhabitants of the North Caucasus to the rest of Russia are the unresolved problems of this region - the lack of an economic base, “de-Russification of the territory”, “the corruption of local elites by uncontrolled financial injections and the strengthening of ethno-organized crime”. But our industry has also degraded, which made local residents vulnerable. “It is necessary to provide residents of the regions with the opportunity to earn honestly, not to depend on the newcomers and not be afraid of them,” Krupnov believes.

No doubt, all this is necessary, but by what means and for how long? All this is not done in one day, a year or even a decade. And so far there is nothing like that, it would be time to put the visa barriers in front of those who want to taste the Russian pie, as all European countries do without exception.